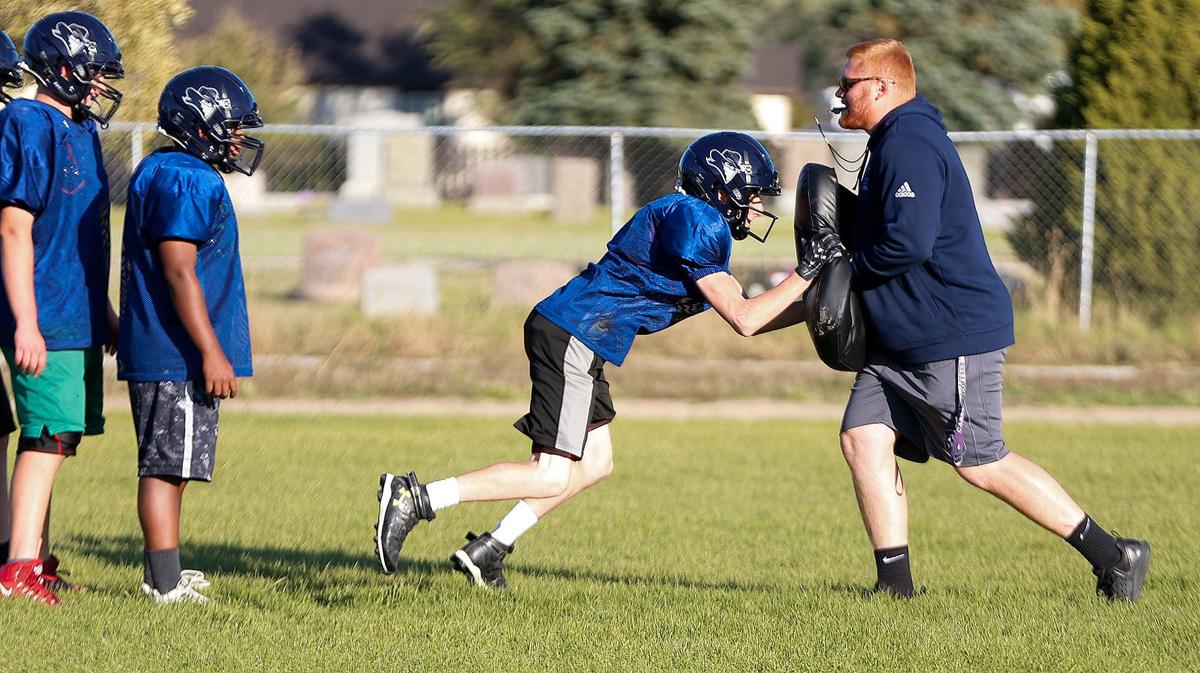 Head coach Gus Somerfeld works with his players during practice Wednesday ahead of the Vigilantes homecoming game Saturday. 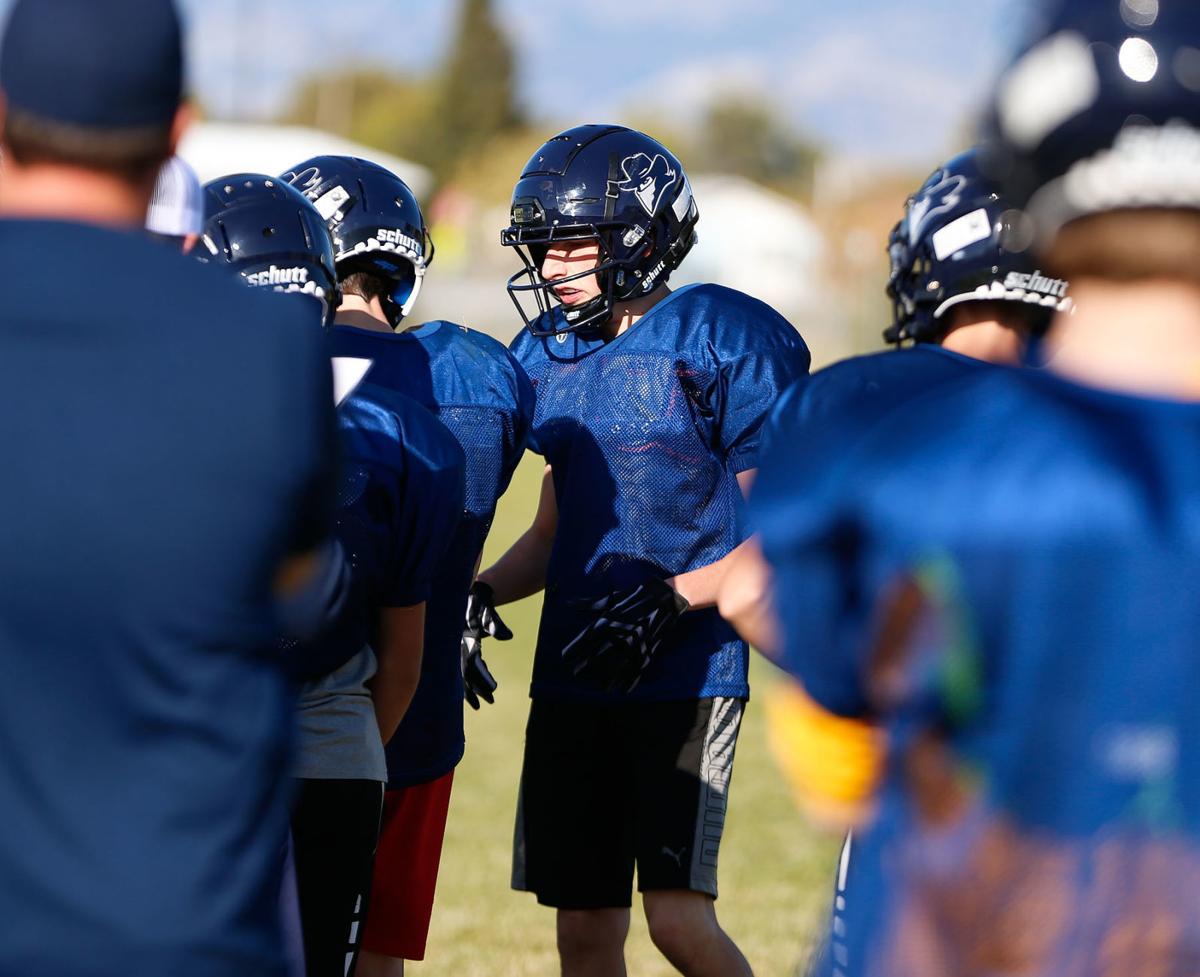 East Helena football players take part in practice Wednesday as they prepare to face Lockwood on Saturday in the Vigilantes first homecoming game. 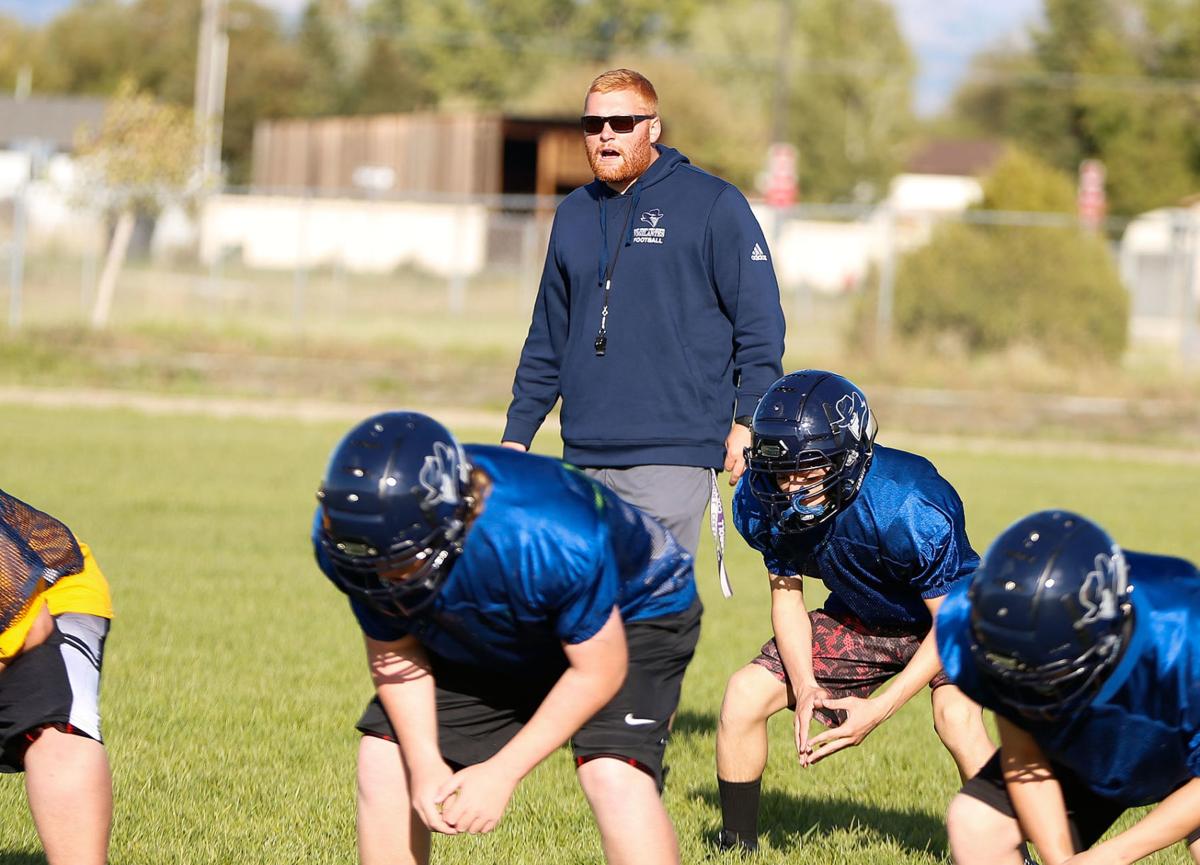 Head coach Gus Somerfeld works with his players during practice Wednesday ahead of the Vigilantes homecoming game Saturday.

East Helena football players take part in practice Wednesday as they prepare to face Lockwood on Saturday in the Vigilantes first homecoming game.

EAST HELENA -- Just about everyone is familiar with the old adage that Rome wasn’t built in a day. Well, the folks in East Helena can tell you, neither is a high school or an athletics program.

Building a high school was something the community wanted for decades and a law passed by the Montana state Legislature in 2017 opened the door, which allowed for the creation of new high schools in East Helena and Lockwood, a suburb of Billings.

The dream then became a reality in May 2018, when East Helena voters approved a $29.5 million bond to build a high school.

But having the money was only part of the process, another was coming up with a plan. And when it comes to building a Class A sports program from scratch, there isn’t a handy guide or how-to manual.

“Things have gone pretty well so far,” East Helena Athletic Director Shaun Murgel said. “We are a work in progress. We learn more every day. There is just so much to think about that you don’t think about.”

For Murgel, becoming an athletic director was always going to include some growing pains. After all, he didn’t have much administrative experience before being selected for the job by East Helena Superintendent Ron Whitmoyer.

But with more than 20 years of coaching football, reaching as high as NCAA Division I at the University of San Diego, Murgel has a vast background in athletics. He’s coached other sports, too.

“I’ve coached football for about 20 years,” Murgel said. “I coached in Shepherd, Montana, in Nevada and Eagle Point, Oregon, so I’ve been to a few places.”

While Murgel has traveled all over, his origin is East Helena and the chance to be the athletic director in his hometown was too good to pass up.

“So it was a chance for me to come home,” he said.

Coming home is always enticing, but the work was just beginning for Murgel. His first order of business was finding head coaches to lead the Vigilantes in their initial sports.

He also knew he couldn’t just hire anyone, because the process of building varsity programs is arduous. But with Gus Somerfeld in football, Kayla Layson in volleyball, Jeff Darling in soccer, Alyssa Salerno in golf and Katie Gilboy in cross country, Murgel believes he has found the right people.

“We were looking for good people that want to be here for the long term,” Murgel said. “We just have to look at our future growth and what our plans are. We want to build strong, competitive programs.”

Yet, doing that is much easier said than done.

“Both us and Lockwood are starting out with just freshmen,” Murgel said. “And that makes it hard for us to schedule other teams with just freshmen because they are also scheduling with their varsity programs. So finding games has been a challenge.

“Fortunately, some schools still need games for younger kids. But it’s been a lot of trial and error, trying to figure out what works.”

Another challenge has been practice schedules and games. The football team has been practicing at different venues and playing games at East Valley Middle School. Volleyball, on the other hand, has played at Prickly Pear Elementary.

But next fall, when the high school is built, along with a brand-new football stadium that features lights and field turf, lack of facilities will no longer be an issue.

While the Vigilantes expect to be playing in their new football stadium next season, varsity football is still at least two years away. However, Somerfeld, a former Carroll football player and native of Power, has been encouraged by the progress.

“We have had some growing pains,” he said. “But there are a lot of things to be optimistic about. In our program, we started with 24 kids and that’s pretty incredible for having a class of 120. About half the boys in our school are playing football.”

The Vigilantes are unique. An easy way to see that is through the goals set by the football team at the outset of its season.

“When we went to set our goals at the beginning of the year, one of the goals they set for themselves was making the community proud,” Somerfeld said. “So they are super invested in representing what East Helena has to offer.”

Of course, the positives aren’t just limited to the football team.

The community has been excited by all of the fall sports. This Saturday, that pride will be on full display as the Vigilantes get set for their first-ever homecoming festivities.

Volleyball will tip things off at 10 a.m. against Lockwood, followed by a football game against the same opponent at noon.

Murgel agreed, noting the excitement in the East Helena athletes, many of whom are driven by that same sense of community pride.

“Our kids go out and compete every day and that’s a huge positive,” He said. “I am just getting to know these kids, but it’s very exciting. They are very enthusiastic.”

Montana's two brand-new high schools play each other for the first time in football, volleyball