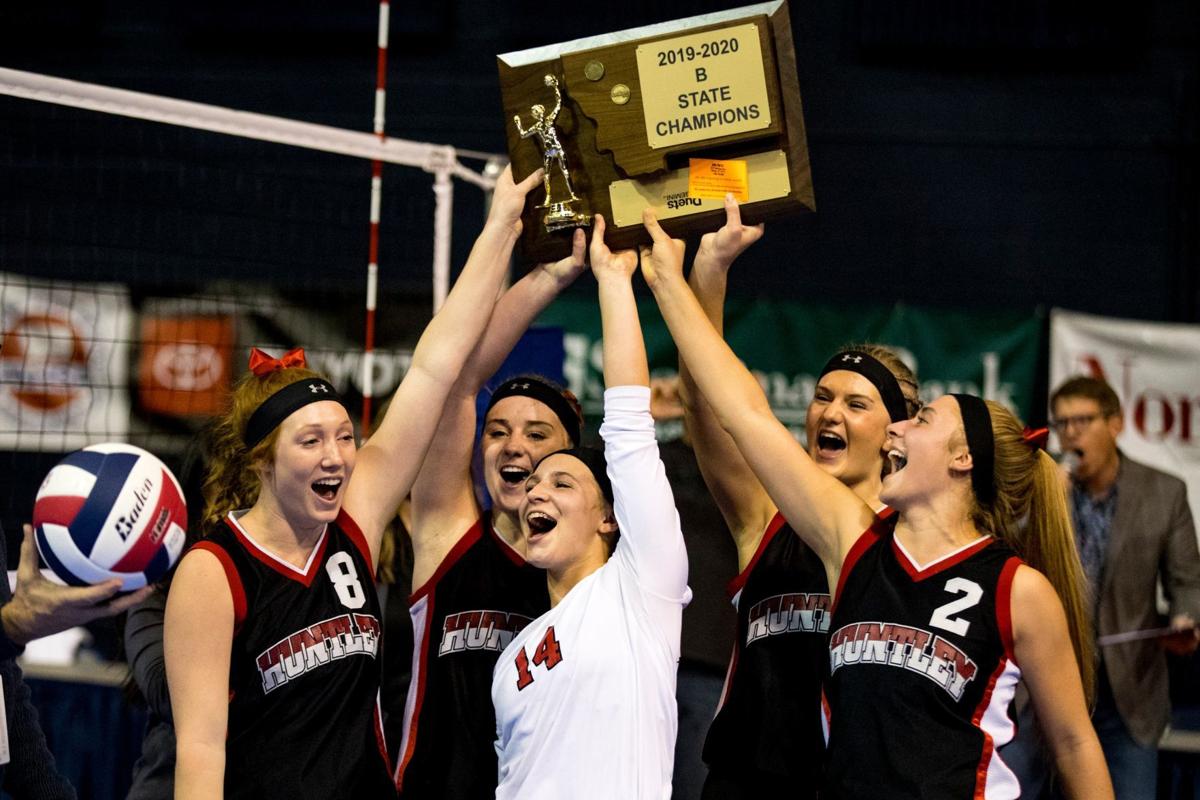 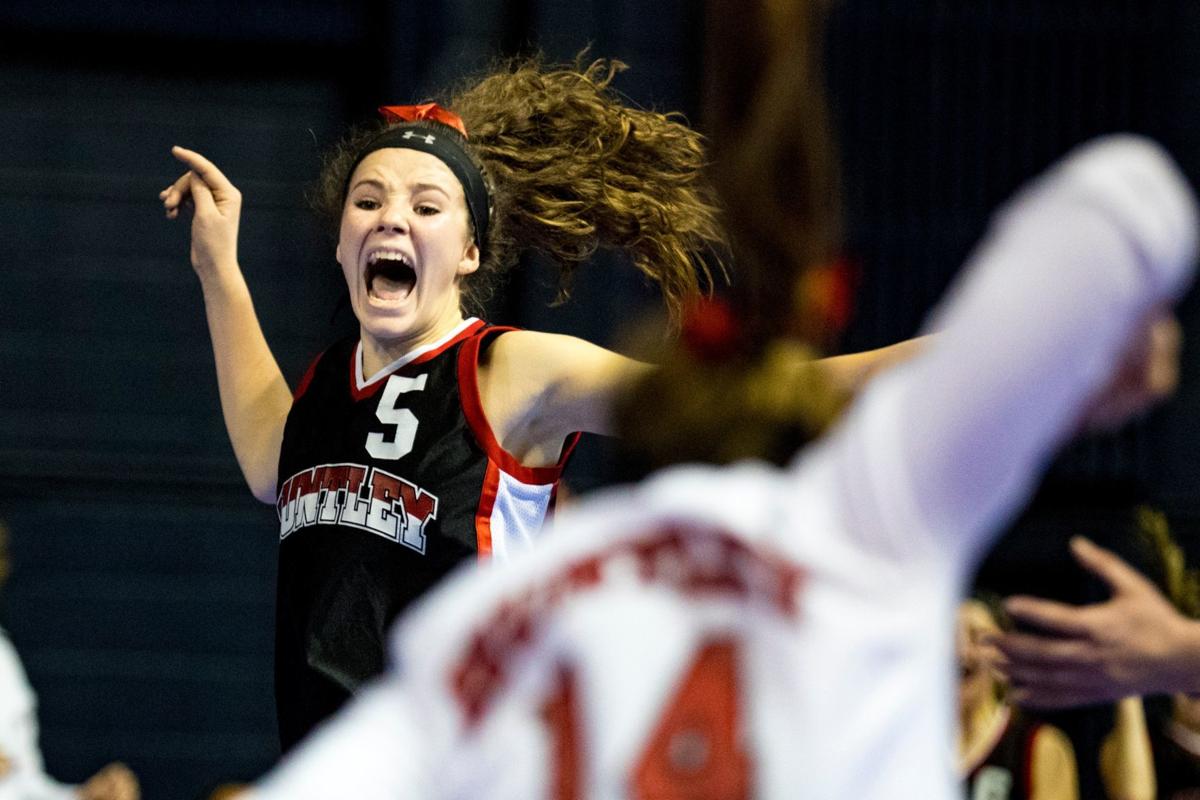 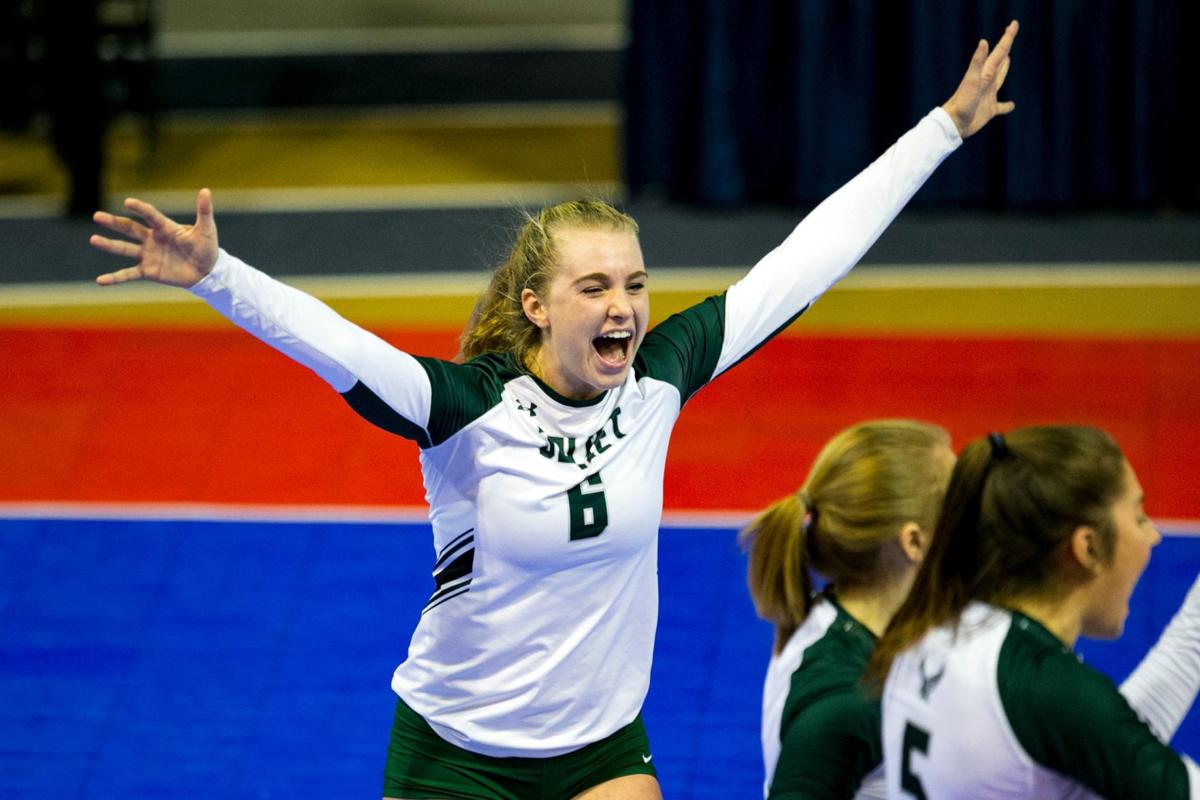 BOZEMAN — Iona Stookey took a moment to soak it all in.

Even though her players were celebrating wildly on the Brick Breeden Fieldhouse floor after Josie Hasler put the finishing touch on Huntley Project’s third consecutive Class B volleyball title, Stookey bowed her head and finally loosened her white-knuckle grip on the small, red spiral notebook she clutches during matches.

So much flashed through her mind, not the least of which was the Red Devils’ 25-17, 25-20, 23-25, 23-25, 15-7 victory over Joliet in the state championship match Saturday afternoon. She was thinking of her seniors — Emily Poole, Addy Hultgren, Jordyn Zimmer, Sara Sumner and Alana Graves — and all that they’d accomplished.

Those accomplishments include that third-straight state title, which gave Project and Stookey 12 championships overall to tie former coach Jeff Carroll and his Billings Senior program for the most in state history. And they included a match winning streak that stretched to an even 100 with Saturday’s win, surpassing their own record of 99 set by the Red Devils from 2003-05.

“They’re in a class by themselves and they’re amazing kids,” Stookey said, her voice starting to crack a bit. “I’m going to miss them a lot. A lot. It was a sad, sad … I didn’t even jump up, I just had to put my head down just because it was all over.”

Perhaps there was a bit of relief, too. By getting that 100th win, maybe people would stop bringing it up. And relief, too, when Hasler’s kill found the corner to put an end to what Project players Poole and Hultgren called their toughest match in the last two years.

Joliet coach Colette Webber constantly says the Red Devils have made her program better. On this day, it’s safe to say the J-Hawks made the Red Devils better.

Coming into the state tournament, Project had dropped just two sets all season, both to Joliet. The J-Hawks doubled that total, and had they taken that fifth set, the teams would have had to play a second championship.

As good as her team played in the championship, Webber wasn’t sure how much her J-Hawks would have had left in the tank, considering they had already had to defeat Florence-Carlton in the morning’s loser-out semifinal.

“I said ‘give them everything you have’ and that’s what they did,” Webber said of her team, the second-place trophy sitting in a chair next to her on the J-Hawks’ sideline. “They gave them a good championship game, and they fought hard. They played amazing. I’m so proud of them.”

Joelle Luomo led Joliet with 17 kills, followed by Makenna Bushman with 15 and Skyler Wright with 10. Bushman also had 30 digs and Wright 25, and Shayla Webber finished with 34 assists and 25 digs.

“We’ve been working all season towards this goal, and going to five (sets) it really got our blood pumping,” said Hultgren, who had 58 assists. “To win it feels so much better that they put up that good of a game with us.”

Project started the fifth set with an overpass kill by Graves, and went on to take a 4-1 lead. The Red Devils got the lead to 13-6 on kills by Poole and Hultgren, and then got to championship point on a Poole tip.

It was her turn to toe the line, and she took a long stroll to the baseline before serving up the final point. After Joliet returned the ball back, Hultgren set Hasley on the outside pin and it was all over.

“This is the best feeling in the world,” Poole said. “I wouldn’t want to do it with a different team. This is amazing, I’m so proud of what we’ve accomplished these past couple years.”

One by one, Florence-Carlton coach Christy Duchien sought out her players for one last hug.

The Falcons, Class B state runners-up for the past two seasons, had just landed one spot short this season, finishing third after a 25-14, 25-18, 25-14 loss to Joliet in the loser-out semifinal.

Florence-Carlton won three matches over the course of 12 hours Friday just to get to this point, but summoning up the energy and consistency another 12 hours later needed to beat a quality opponent like Joliet wasn’t in the cards.

“They’re warriors,” Duchien said of her team. “Losing in that first round and coming all the way through (Friday), they fought hard. They fought hard.”

So, the Falcons take home another trophy, a third place to add to the second-place hardware from 2017 and 2018. Add to that a fourth-place finish in 2016, and the Falcons have had a nice run.

And though five seniors are graduating out of the program, Duchien isn’t conceding anything. After all, this is a program that hasn’t finished out of the top four since 2011.

“We’ll get there, it’s elusive,” Duchien said, referencing the sought-after state title. “But Florence will come back firing.”