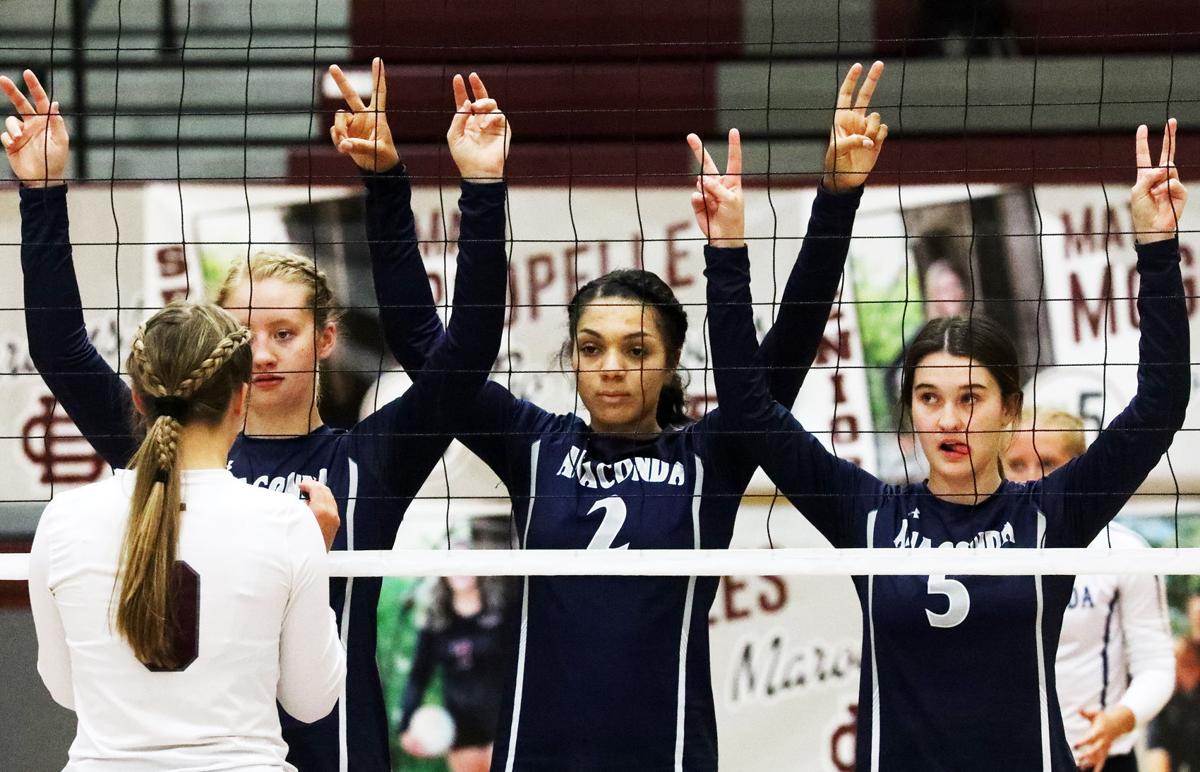 Anaconda High School players Payton Bailey, left, Mia Sullivan Sanders, center, and Megan Reich, line up at the net on Tuesday during their match against Butte Central High School at the Maroon Activity Center in Butte. 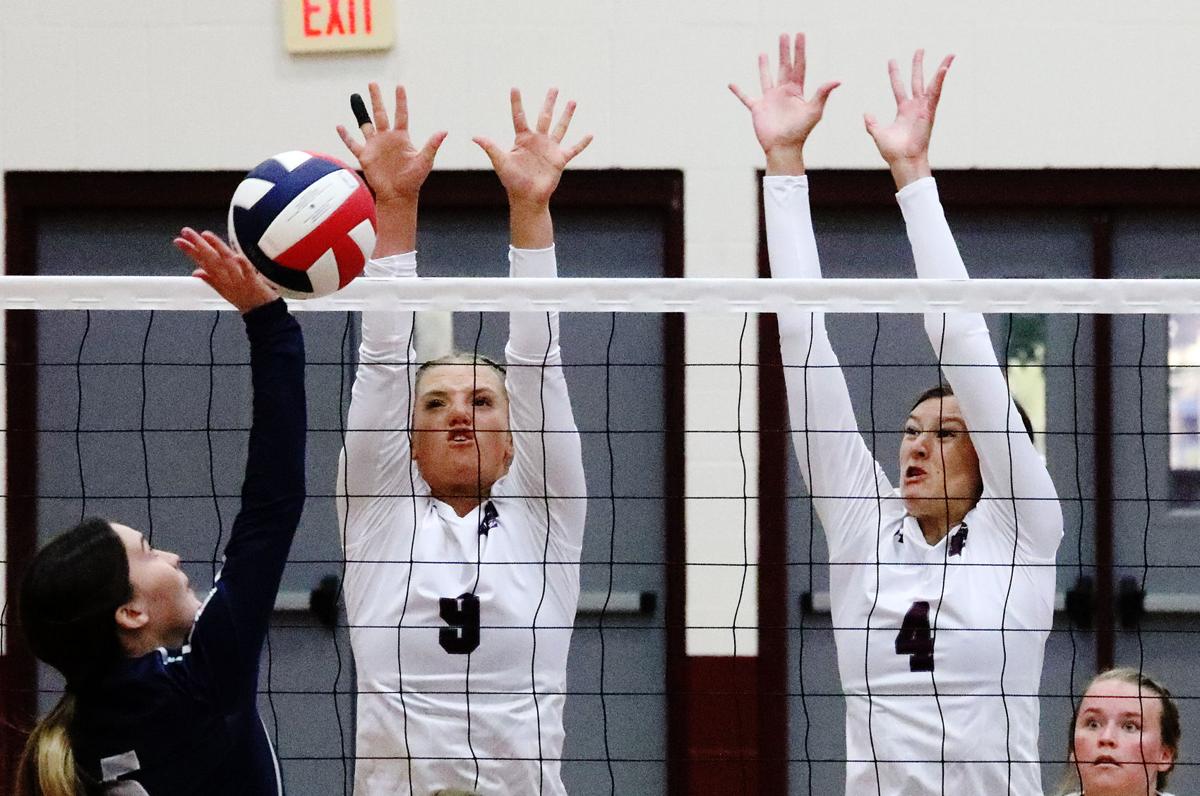 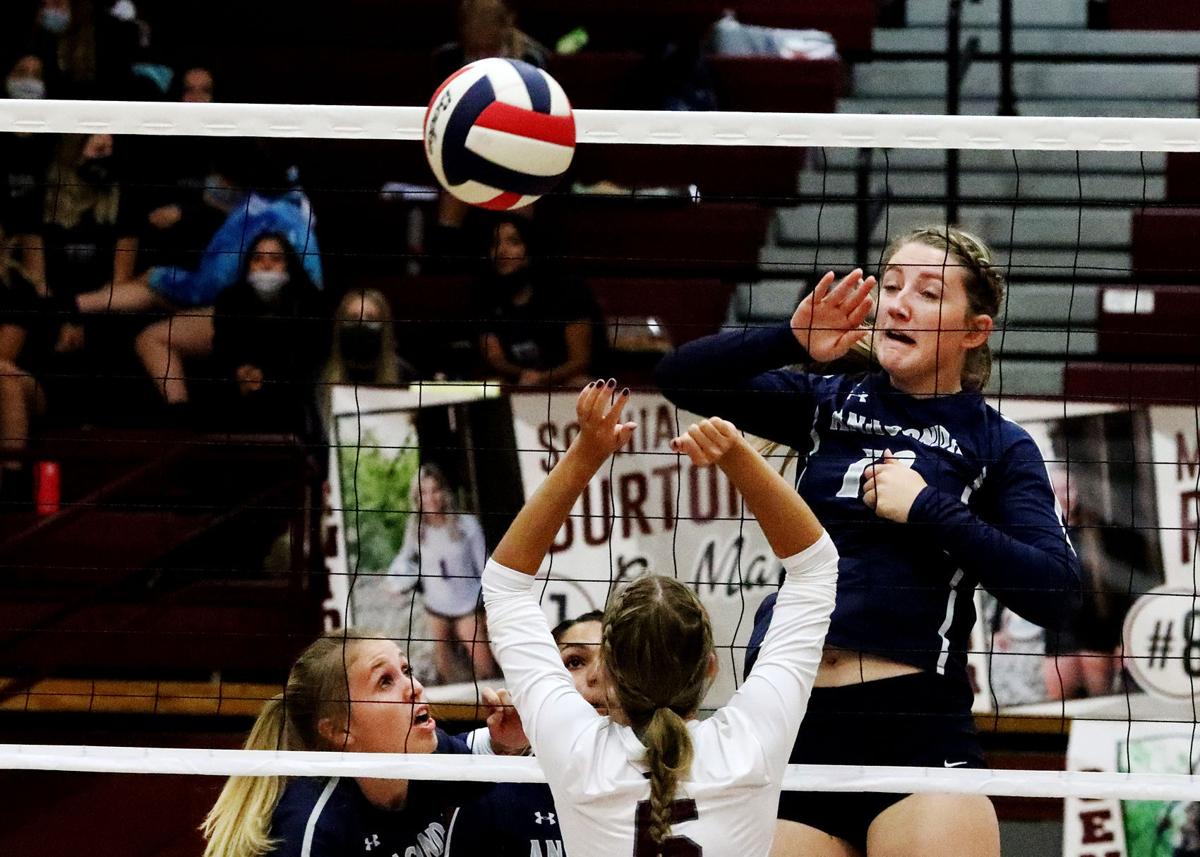 Anaconda's Briana Puear hits the ball over the net on Tuesday evening in the Copperheads game against Butte Central at the Maroon Activity Center in Butte. 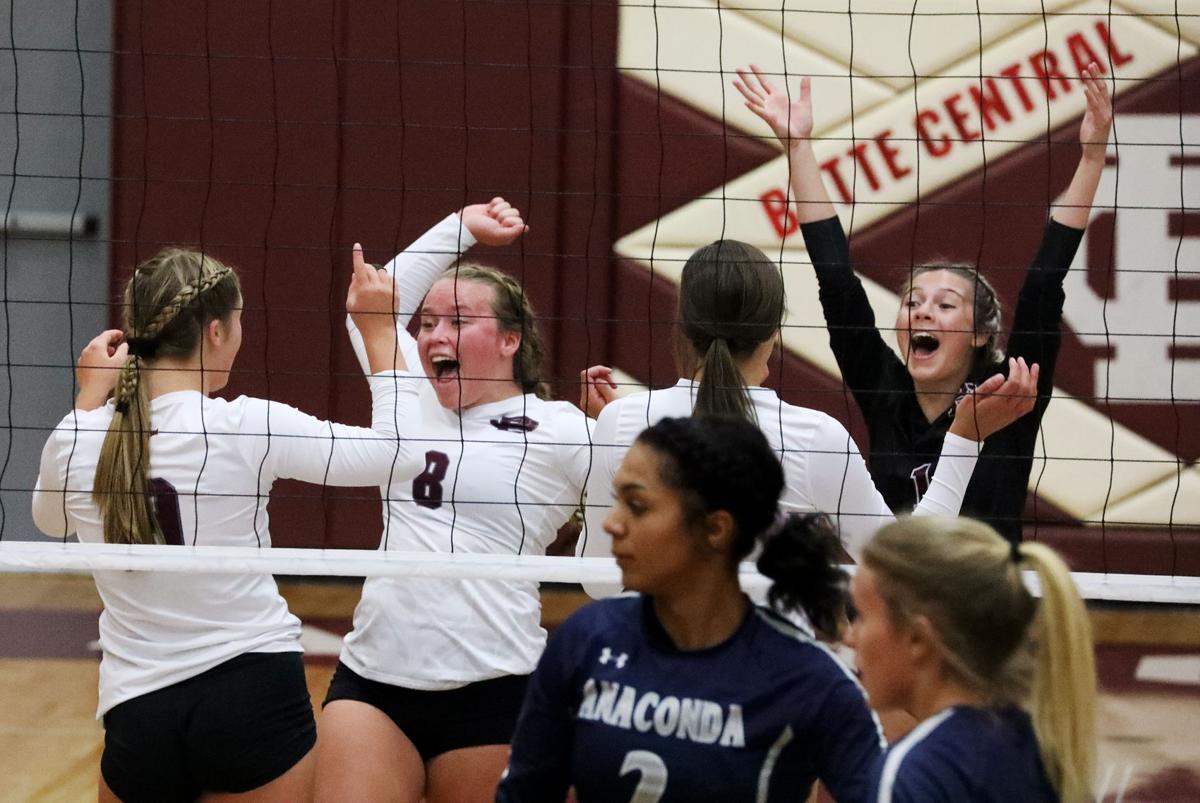 Butte Central Marci Reopelle celebrate a point with her teammates during the first match against Anaconda High School on Tuesday evening at the Maroon Activity Center in Butte.

Anaconda High School players Payton Bailey, left, Mia Sullivan Sanders, center, and Megan Reich, line up at the net on Tuesday during their match against Butte Central High School at the Maroon Activity Center in Butte.

Anaconda's Briana Puear hits the ball over the net on Tuesday evening in the Copperheads game against Butte Central at the Maroon Activity Center in Butte.

Butte Central Marci Reopelle celebrate a point with her teammates during the first match against Anaconda High School on Tuesday evening at the Maroon Activity Center in Butte.

BUTTE — Despite it being one team’s opener and another’s second match, Anaconda and Butte Central brought the intensity of a late-season clash.

First-year Anaconda head coach Korey Krumm talked about the difficulty of playing on the road without fans, and against an experienced Butte Central squad.

“It’s really hard to go into that gym with no fans sitting on our end,” Krumm said. “It almost doesn’t feel like an actual game. We have to hold ourselves accountable for noise, we have to be mature in that way and that’s a unique part of this season.”

It didn’t take long for Anaconda to generate that aforementioned noise, as the Copperheads and Maroons opened with a fairly tight set, with neither side separating themselves by more than five points the entire opener.

Senior middle hitter Brianna Puear wasted no time getting going, registering a pair of aces and four kills as the 6-foot middle hitter was clinical in her spikes and serves early.

Central responded to the pressure well, though, taking advantage of a handful of Copperhead mistakes in the second set to claim a sure victory despite not having to win a lot of tough volleys.

The Maroons put together an 8-1 run at one point, as senior outside hitter Amira Bolton consistently found Anaconda weak spots and earned four kills.

Central continued building their lead, as senior Avery Kelly also turned up the heat alongside Bolton with two important points during an 9-1 run by the Maroons to distance themselves and lock up Game 3.

Maroons head coach Becky Hancock said that the team didn’t do anything extraordinarily different in their two game wins, just looking to limit Puear and senior outside hitter Aubrey Tuss who led the match with 19 kills.

“We made some adjustments with our blocking,” Hancock said. “Getting up there quicker with her. That’s the thing with volleyball, it’s a very mental game. Once you get into someone’s head, you can kind of take away their momentum and I think that’s what happened in the second and third game with her, but then she found her momentum again.”

However, it then became the Copperheads turn to respond to pressure with the match on the line, but the duo of Puear and Tuss were up to the challenge as Anaconda took their chance with Game 4’s final 10 points, turning a 15-14 lead into a 25-14 game win with the final 10 points.

Krumm talked about her hard-hitting duo of Puear and Tuss, saying that they play an integral role to Anaconda’s success.

Forcing a 15-point Game 5, the Copperheads reverted the momentum back to their end of the court, as Tuss continued to be a presence at the net, with setter Tiora Ferguson providing good service to both Tuss and Puear, the latter of which nearly matched Tuss with 17 kills.

The Maroons looked to be earning late momentum despite being down, getting the final game to 8-10, but Anaconda played cleanly and didn’t open much of a chance for Central, securing the 15-10 win.

While Tuss and Puear led the Copperheads, the Maroons were led by Kelly and Bolton's nine kills a piece, with Marissa Anderson adding eight more.

Both coaches said the game was a solid tuneup as the season ramps up, with Hancock saying that there are good signs to build on despite the loss.

“It was a good match for the opener,” Hancock said. “Wish we could’ve finished out, but I saw a lot of great things tonight. Just not consistently, I thought we put together a great second and third game and all the rest of them were very rollercoaster-y.”