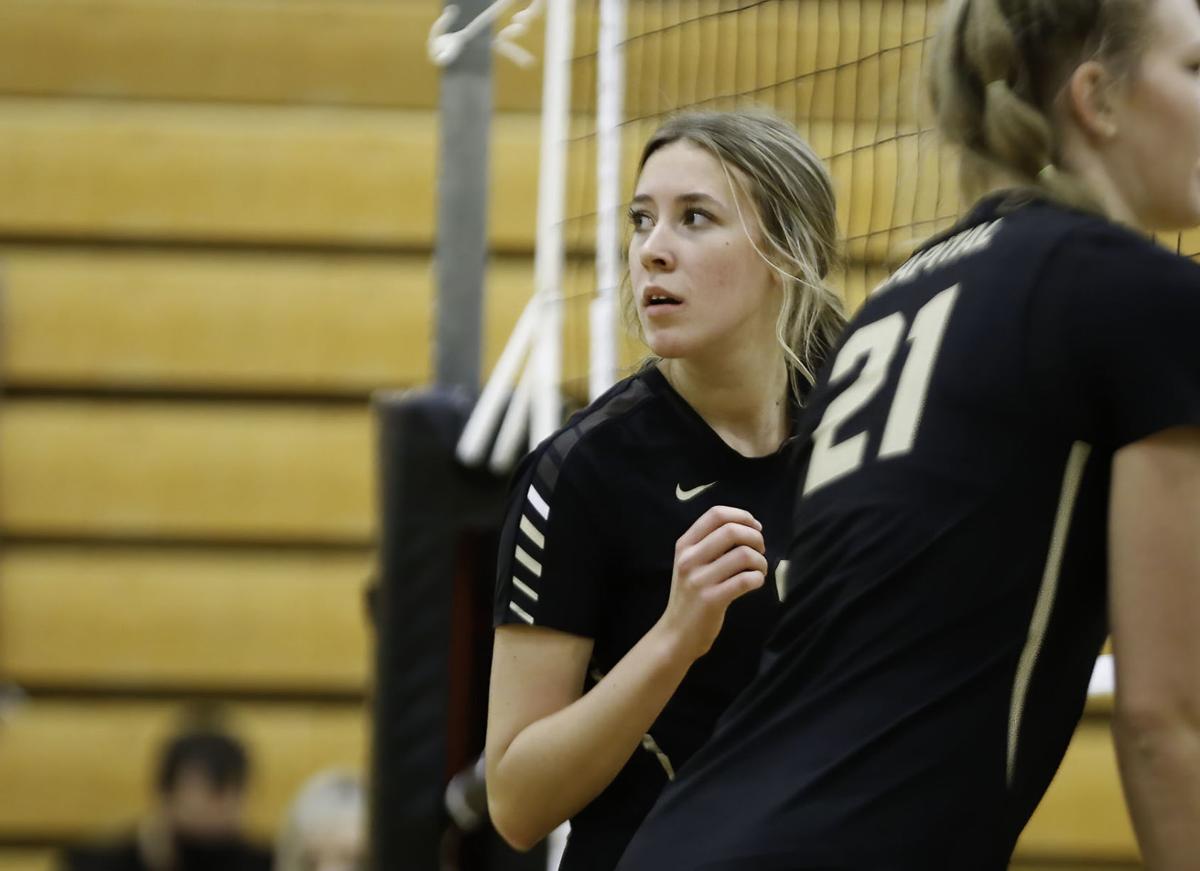 Rachel Stacy, left, looks toward the Bruins' back row during Capital's win over Billings West on Tuesday. She and the Bruins will look to win their third straight title Saturday. 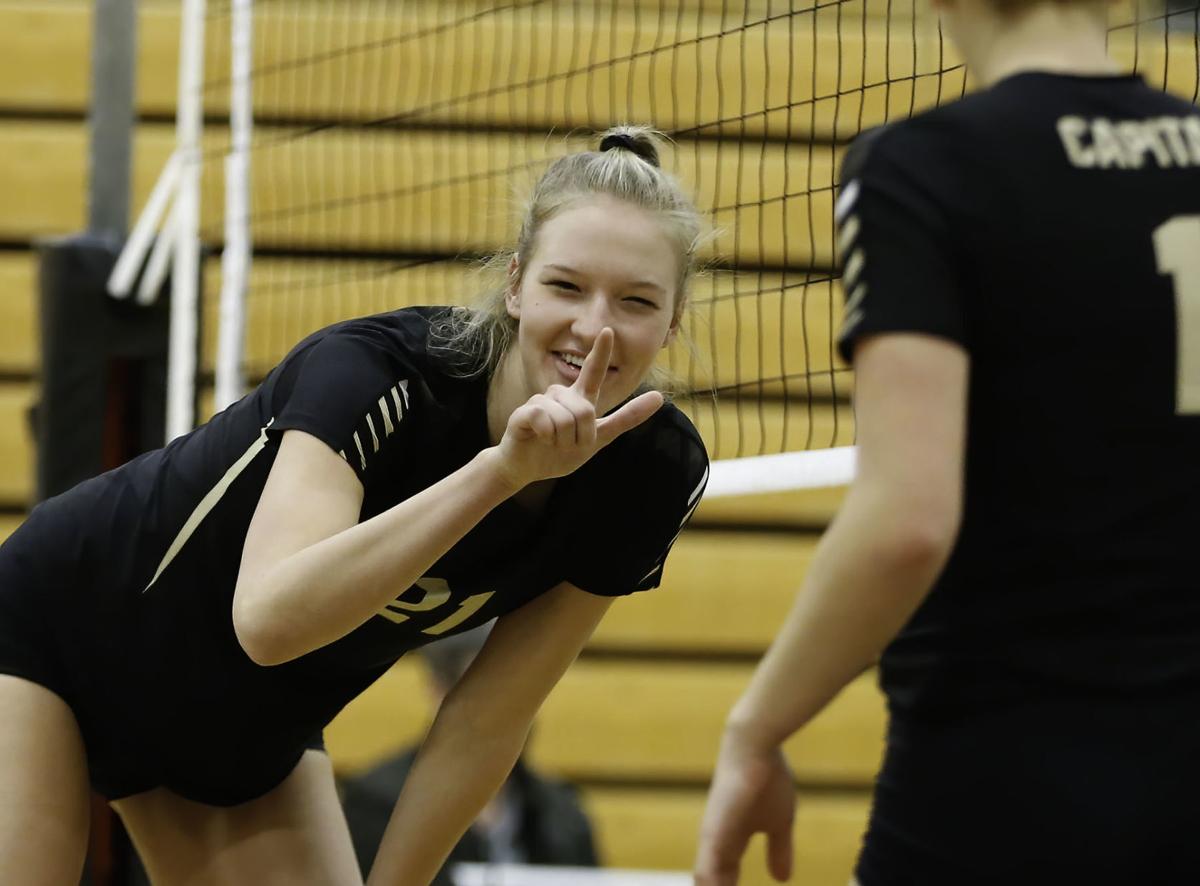 Rachel Stacy, left, looks toward the Bruins' back row during Capital's win over Billings West on Tuesday. She and the Bruins will look to win their third straight title Saturday.

Over the past three seasons, the Bruins have won 70 matches in a row, a Class AA volleyball record, won back-to-back titles, something no other Capital volleyball team has done and Saturday, the Bruins can become just the third Class AA program to win a third straight title, joining Missoula Sentinel (1985-88) and Billings Senior (2012-14).

Standing in their way is Great Falls CMR, the No. 2 team in the state and another unbeaten. The Rustlers (17-0) and Bruins (16-0) will square off for the Class AA state championship in the Bears Den at 2 p.m.

"We are super pumped," Capital head coach Rebecca Cleveland said. "We have two undefeated teams that haven't seen each other the entire season. You can only learn so much from film so you have to worry about what you can do on your side of the net. We just want to be confident and aggressive and celebrate our season together."

"Pulling off that victory though," she added. "And getting that 3-peat, that would be insane."

Last season, when the Class AA state tournament was in Bozeman with the rest of the classifications, the Bruins beat crosstown rival Helena High in the title match, after both teams had beaten CMR in the previous round.

But on Tuesday, in Great Falls, the Rustlers prevented a crosstown rematch as they swept Helena High to advance to the title match, which is being hosted by Capital as the top seed in the Western AA.

Since the tournament is normally double-elimination and held in Bozeman, the host for the state title match was determined by coin flip, giving Western AA teams the right to host if the seeds were equal.

"It's going to be fun to host it," Dani Bartsch said. 'But I still wish it was in Bozeman. It's really fun getting to watch the other teams and the atmosphere is really exciting."

While the fans have and will be limited for the title match on Saturday, according to Cleveland, it would have been hard to notice in the Bruins semifinal win over Billings West.

"For the girls, I miss the state experience," she said. "But I love that we get to host a championship at home. We miss the fans but our parent section made it feel like a crosstown match against (West). So props to our parents for just stepping up."

Families in attendance on both sides will get treated a winner-take-all title match featuring some of the top players in the state. Capital, of course, is led by the last two Gatorade Players of the Year in Paige Bartsch and Audrey Hofer, who signed with Boise State and Montana State this past week, respectively.

Dani Bartsch, who signed with the Lady Griz for basketball, is the third all-state volleyball performer on Capital's roster.

Yet, the Rustlers also have two all-state performers in juniors Lauren Lindseth and Tennisen Hiller and plenty of firepower of their own.

CMR is also plenty experienced in the postseason after getting third place in 2019. The Rustlers have also yet to drop a single set in the playoffs leading up to the title match.

Capital, on the other hand, had to rally from a 2-1 deficit to knock out Billings West in five. In fact, after not getting pushed to five sets once in 2019, the Bruins have rallied from 2-1 or 2-0 to win on three separate occasions.

"I think it builds character," Cleveland said about coming from behind. "It tests you to see how you react in times of pressure and for us to refine our skill under pressure is important and to have that before a championship match is a godsend, truly. I think that will make us hungry to go big against CMR from the start."

Whichever team wins, it will be a historic as the Rustlers are aiming for their first state title in 20 years, while the Bruins would become the first Queen City high school volleyball team to complete a 3-peat.

Nov. 3-10, 2020 Playoff format with games hosted by the higher seed. Teams are re-seeded after the first round.