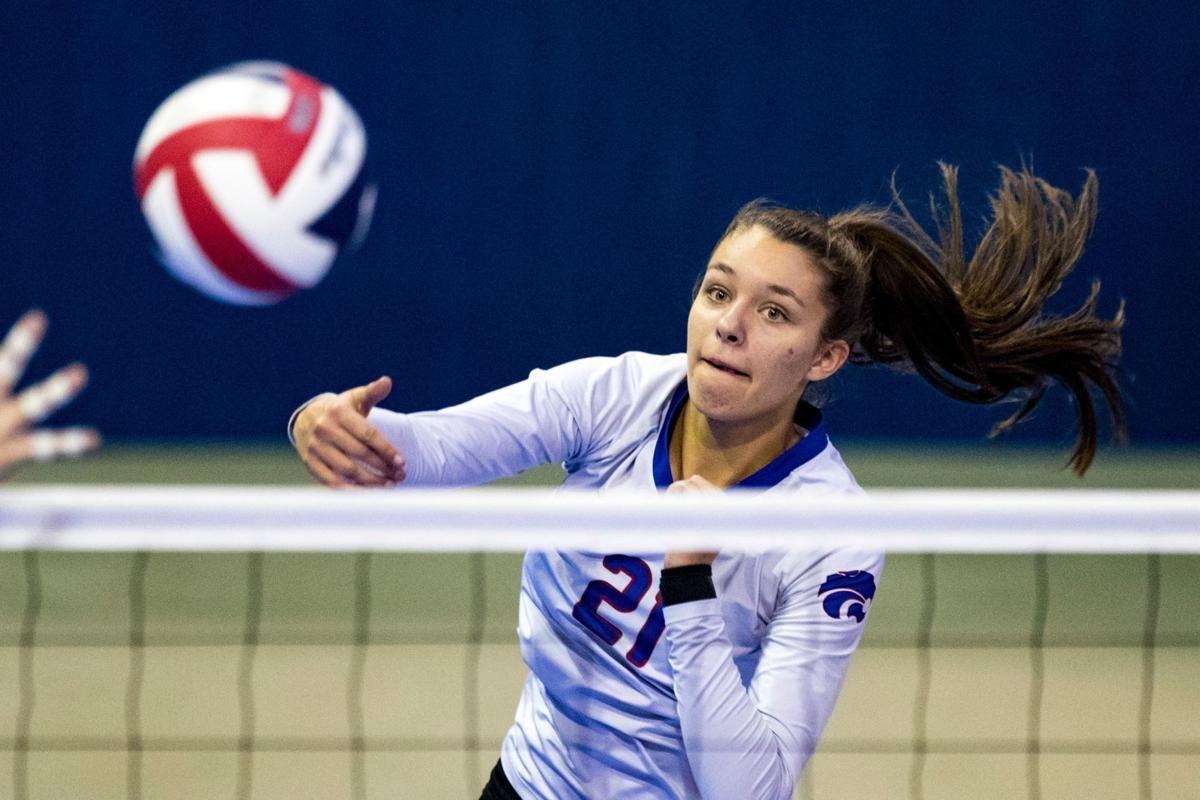 Columbia Falls' Madysen Hoerner hits the ball at the 2019 State A volleyball tournament against Hardin in Bozeman. The Wildkats begin postseason play Thursday with an undefeated record and a belief they have the team to break through and win a state title. 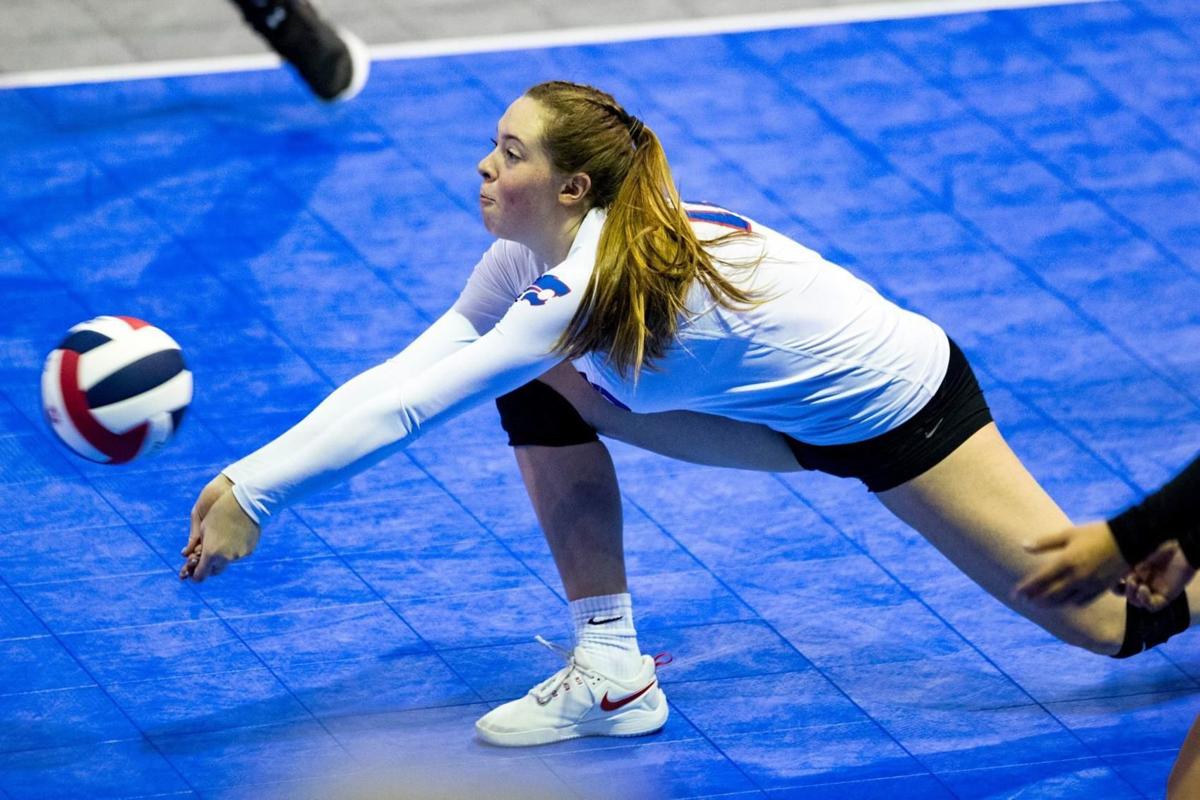 Columbia Falls' Lauren Falkner lunges for the ball at the 2019 State A volleyball tournament against Hardin in Bozeman. Falkner is one of six seniors for the Wildkats.

Columbia Falls' Madysen Hoerner hits the ball at the 2019 State A volleyball tournament against Hardin in Bozeman. The Wildkats begin postseason play Thursday with an undefeated record and a belief they have the team to break through and win a state title.

Columbia Falls' Lauren Falkner lunges for the ball at the 2019 State A volleyball tournament against Hardin in Bozeman. Falkner is one of six seniors for the Wildkats.

WHITEFISH — Dillen Hoerner was in eighth grade when she saw it happen.

Now a senior at Columbia Falls, Hoerner made the trip to the 2016 state tournament to watch the Wildkats repeat as back-to-back state champions. It left her with a special feeling as she prepared to head into high school the following year.

“I thought, ‘That’s where I want to be. I want to play like that team. I want to win,’” Hoerner recalled after Columbia Falls wrapped up the conference title for the second season in a row.

Hoerner isn’t the only current senior who witnessed the Wildkats win back-to-back state titles in 2015 and 2016. The six seniors were seventh- and eighth-graders during those runs to glory.

Mix in a couple of juniors, and the impressionable youngsters saw who they wanted to become one day, building a tight-knit bond that’s helping them toward duplicating the success of the girls they idolized.

“They definitely set up how I wanted to go out my senior year,” senior Lauren Falkner said. “They set the example of what I want to be like and how I want to play. Every day, when you go to practice, you have that mindset, ‘That’s who I want to be.’”

The Wildkats will now get the opportunity to join the history books alongside those former players when they begin the playoffs Thursday in the Western A divisional.

The goal is a state championship, and coach Jolandie Brooks doesn’t avoid saying it, especially when she has a group that’s undefeated and that she believes is capable of accomplishing it.

Much like the 2016 team, this year’s Columbia Falls squad is a senior-heavy group that’s been through the fires together.

The six seniors — Hannah Schweikert, Dillen Hoerner, Madysen Hoerner, McKenna Rensel, Lauren Falkner and Rhys Sharpton — have been playing together since seventh grade in club volleyball. Many have been teammates going back to rec ball in third grade.

“I think it’s just our friendship and our bond as sisters that lets us play to the best of our abilities,” Dillen Hoerner said.

“The trust is very much there,” said Grace Gedlaman, one of two juniors along with Jazzy Marino who are regular starters. Junior Madeline Stutsman has come up from the JV squad to provide setter duties when needed.

That trust was built on the court at open gyms, in practice or in games. Everything that was done and that was said was with the intention of working toward a state title.

“Having them telling you, ‘You got it, we believe in you, we got you,’ just that kind of reassurance, that’s a huge thing,” Mady Hoerner said.

The friendships were strengthened in the downtime, like before and after practices or on the lengthy bus rides to games and tournaments.

Combining that family atmosphere, trust and friendship has made them realize they can live up to the goals they set heading into high school.

“This team, we’re a fighting team,” Rensel said. “We’re more than a volleyball team. We are family, we are friends, we make each other laugh every day, and I love playing on this team. We can accomplish amazing things, and I think we have a really good chance at state.”

Unlike the 2016 team that repeated as state champs, this year’s group fell short in winning as juniors, going 1-2 at the state tournament.

They knew this was their last chance.

“It was really devastating last year,” Mady Hoerner said. “Us being so together and putting in the hours in the gym, everyone wanted it so much more. We were like, ‘OK, we’re going to win it,’ and we had that mindset every practice like, ‘OK, everyone’s trying to beat us,’ so just having that mindset of doing one extra pushup, one more set, one more kill because striving for good enough wasn’t good enough.”

With changes afoot, Brooks saw her team finally maturing into the potential she saw when they were heading into high school. No longer did they make excuses or blame others for mistakes. They instead took more ownership of their struggles and looked to how they could make corrections.

“The light bulb really went off,” Brooks said. “I’ve seen it on the court with the different shots or different play, but even more so with the way they interact with each other, their mental mindsets. It’s the little things we’ve pounded over and over and over again. It’s like they’ve taken my feedback over the years and they’ve really bought into it, and that’s helping things come into fruition this year.”

That approach includes living up to their team mottos, like the words “grit” and “discipline,” which grace the shirts they wear during pregame warmups. The seniors have tried to live up to those program words since learning about them in seventh grade.

“This year, we decided we would really try and honor those words,” Mady Hoerner said, “because playing like that is what we felt like it’s going to take for us to win.”

Unlike the 2016 team, which had four players standing 6 feet or higher, this year's group has just one, 6-foot outside hitter Mady Hoerner. But both teams' core group had experience playing together, helping lead to cohesive play on the court where they’ve learned to move as one.

Rensel is in her first year taking over as libero, one of a few changes along with Marino stepping up as a junior after the team graduated just two seniors. Despite the minimal attrition, it still took time this year for the team to tweak what it felt could be a winning formula.

“We had to forget about last year’s team,” said Gedlaman, a two-year starter at middle blocker. “We can’t be trying to be those players because we are a new team. We’ve got to remember that because otherwise it’s hard to click with your players.”

Most of the seniors have been three-year starters going back to their sophomore year. Hannah Schweikert has been a four-year starting setter running the offense while breaking the program’s record for career aces.

So, their time playing together makes it to where things can flow easily on the court. It’s also helped that they’ve got to scrimmage against members of the 2016 team in open gyms, seeing that high-level play on the court, not just from the stands.

“This group of seniors, we’ve been playing together forever,” Falkner said, “so I think that’s definitely an advantage because we know how to play with each other. We know that this group is very special and that we can get things done.”

The Wildkats have been limited in their chances to play a wide-range of competition because of the coronavirus, but they have a win over defending State A champion Corvallis. The only times they’ve been challenged beyond three sets is when they faced a top-tier team like Corvallis or when they’ve had a player in quarantine, throwing off the balance they’ve established.

“I think if we just keep working our butts off at practice, showing up every day and doing what we know we can do, I think we could make it to the state championship for sure, and I think it’s totally possible to win that state championship,” Falkner said.

“I totally agree. We do what we do, and other teams do what they can do about it,” Gedlaman added, typifying the belief the team has in how good it is.

“I think we can win state,” Mady Hoerner said. “Actually, let me rephrase that: I know we can win state because I know everyone wants it just as equally as bad as the next person. It just is coming down to who wants it more, who has the biggest heart.