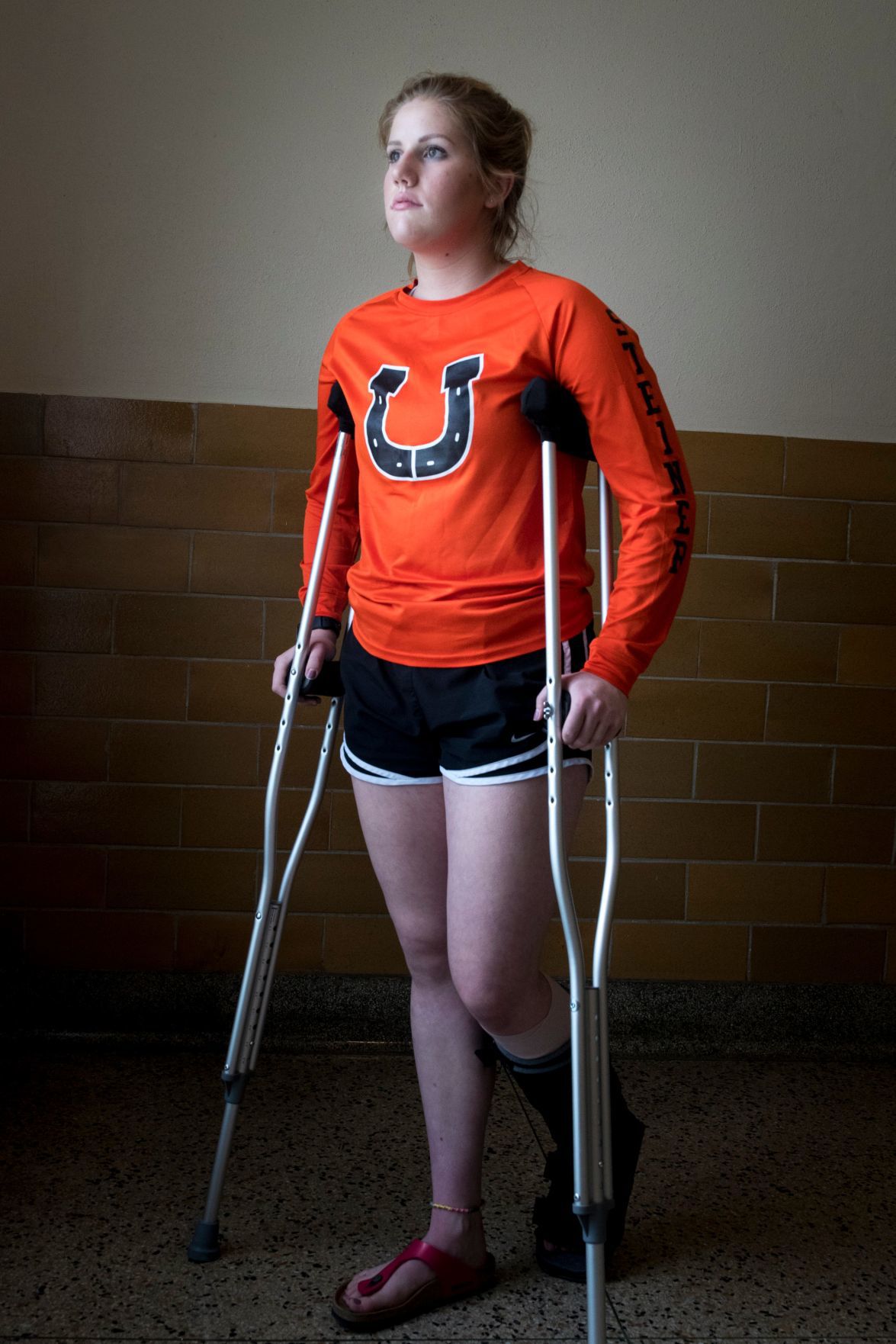 Billings Senior's Karli Steiner was among Class AA's top hitters and back-row players last season and was hoping for more of the same this season. But she broke her fibula in practice two weeks ago, ending her season. 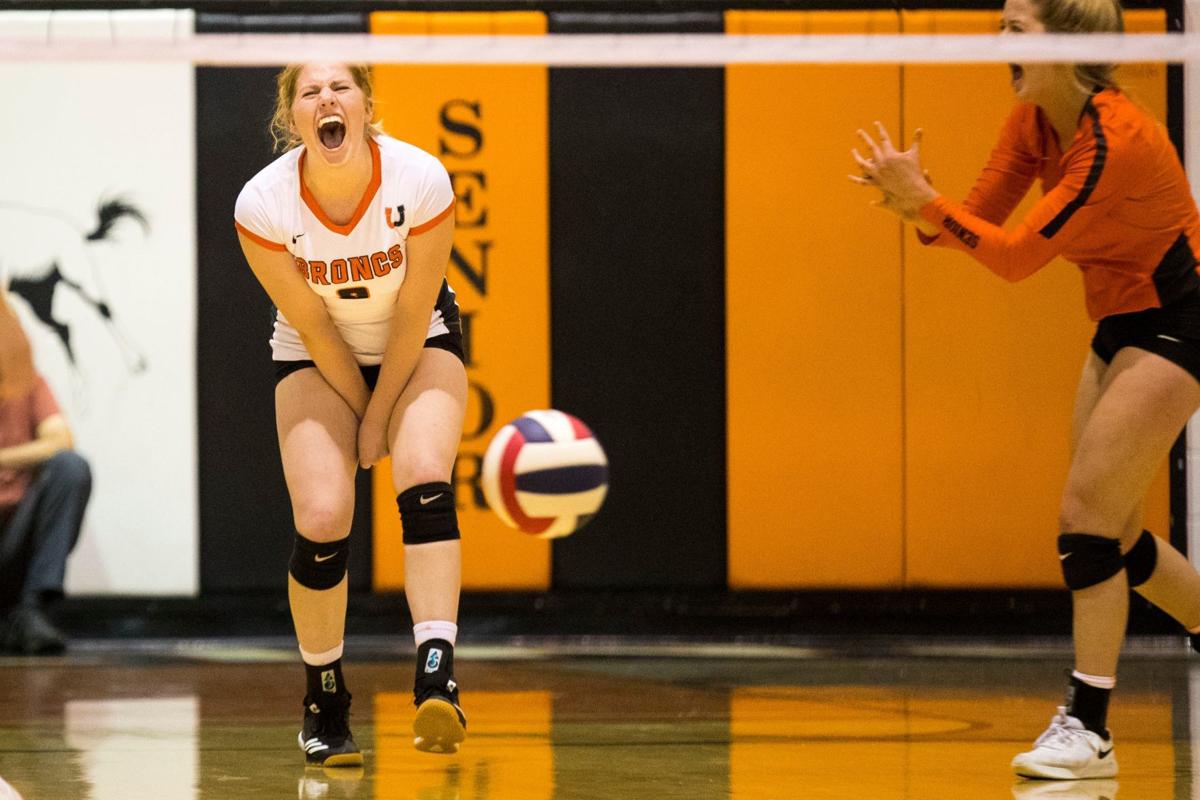 Billings Senior's Karli Steiner reacts after a point during a match against Helena Capital at Senior High School earlier this season.

Billings Senior's Karli Steiner was among Class AA's top hitters and back-row players last season and was hoping for more of the same this season. But she broke her fibula in practice two weeks ago, ending her season.

Billings Senior's Karli Steiner reacts after a point during a match against Helena Capital at Senior High School earlier this season.

BILLINGS — Her left leg propped up on a chair, her broken and subsequently repaired fibula dutifully protected, Karli Steiner seemed at ease.

Sure, a week removed from a season-ending injury and surgery that required a plate and seven screws, there were a couple topics that made her emotional. Recalling that day at practice when she broke her leg, for one. Later, describing how much she’ll miss playing volleyball in what would have been her senior season with the Billings Senior Broncs was another.

But other than that, Steiner knows what’s happened has happened. She's had her good days and her bad days since a brush with a net standard did in her season and high school career, and it’ll probably be like that for a while, but all she can do now is move on.

“This was supposed to be the 10th year of a Steiner consecutively playing at state,” Steiner said as she watched her teammates go through drills at practice last week. “I wanted to do it and finish it out, but that wasn’t God’s plan for me.”

Steiner was preceded in the Broncs’ program by sisters Kiahna, then Aubrie, then Raegan. It’s been a decade of Steiners playing for the Broncs, of parents Chantelle and Nathan attending games, going on road trips. Karli remembers first being exposed to Senior volleyball at eight years old, when Kiahna was first coming up through the program.

So to follow in all those footsteps, particularly helping the Broncs reach another state tournament in her final season, was always the goal. Now, though, if Steiner is to get there, she’ll have to get there on her teammates’ backs.

Steiner was set on it being the other way around. When Kola Bad Bear, last year’s senior standout, blew out her knee a month into the season, Steiner was there to help pick up the pieces and averaged 3.51 kills per set and 4.41 digs per set, which ranked third and fourth in Class AA.

The Broncs went on to win 24 matches and earn their 14th straight trip to state. Senior was eliminated in two matches, but that only made Steiner more determined for this season.

Then came the run-in with the net pole just a couple weeks into this season. Steiner said she had a brief moment of hope that all would be well, but she soon realized her season was over. So, too, did first-year coach Karen Switzer, who could see “the bump that wasn’t supposed to be there” when Steiner’s shoe and ankle brace were removed.

“My first thought was for Karli, and what it means for her as a senior,” said Switzer, a former Broncs player who was an assistant coach during Kiahna Steiner’s playing days.

Steiner is on crutches now, and isn’t supposed to put weight on her leg for another four to six weeks. It’s still a three-month ban on running after that, but she’s hopeful to be back working out and playing club ball by Christmas.

Before the injury, Steiner was in talks with college programs about scholarships. She said one unnamed school has already told her they’re moving on, but she’s hopeful the others stand behind her, that they know what she’s done in the past and what she’s capable of in the future.

When she thinks about life without volleyball, that’s when the emotions kick in.

“It’s been the one thing that I’ve put all my hard work and tears and sweat into for the last 10 years,” she said, a tear or two escaping her left eye. “So I know I’m going to miss it. But if it’s not what I’m supposed to be doing, then I’ll deal with it. I’ll get over it at some point.”

During a 30-minute conversation, though, the tone is more hopeful and lighthearted than that serious moment. She spoke how fellow senior and teammate Sadie Stephens, who had a similar injury earlier in her career, has helped by telling Steiner what to expect on her road to recovery, and how thankful Steiner was for all the get-well-wishes and home visits from teammates and friends.

And her sense of humor remained intact. Steiner is a talented sketch artist, and wants to study art education in college. She told a story of how her older sisters are jealous of her artistic talents, but that she has to point out to them that they received all the height in the family, something she could have used a little more of as an outside hitter. The three older sisters all stand taller than 6 feet; Karli is 5-9.

“Thanks mom and dad!” she blurted.

As for the sketching: “I still do it, I just don’t have a lot of time for it.” Then, after a short pause: “Though I do now.”

If you don’t know the Steiners, they are fierce competitors on the court. Kiahna went on to play at Utah Valley University, while Aubrie and Raegan are both playing for Idaho State.

And though Karli Steiner seemed outwardly relaxed sitting in her chair, some of that fire came out when she talked about what her new role will be, that of energizing cheerleader from the bench and defender of all that is Broncs volleyball.

“I’ve already heard about other schools talking crap about us and I’m not having it,” she said defiantly. “I’m ready to play them. I will be on the bench going, ‘Yeah! Let’s go!’ “

Steiner has been medically cleared to travel with the team, so she'll start that next week. And Steiner knows she has a big say in her future: “I know that when I tell other college coaches (about the injury), some of them will probably drop me as a prospect, but if I want it then I’ll work hard enough for it.”

Steiner also returned to a favorite saying by one of her former coaches, Jeff Carroll, who had a hand in shaping all four Steiner siblings before he retired three years ago.

“Coach Carroll has a saying that he’d repeat to us all the time,” Steiner said. “ ‘Your character is defined by how you react to adversity.’