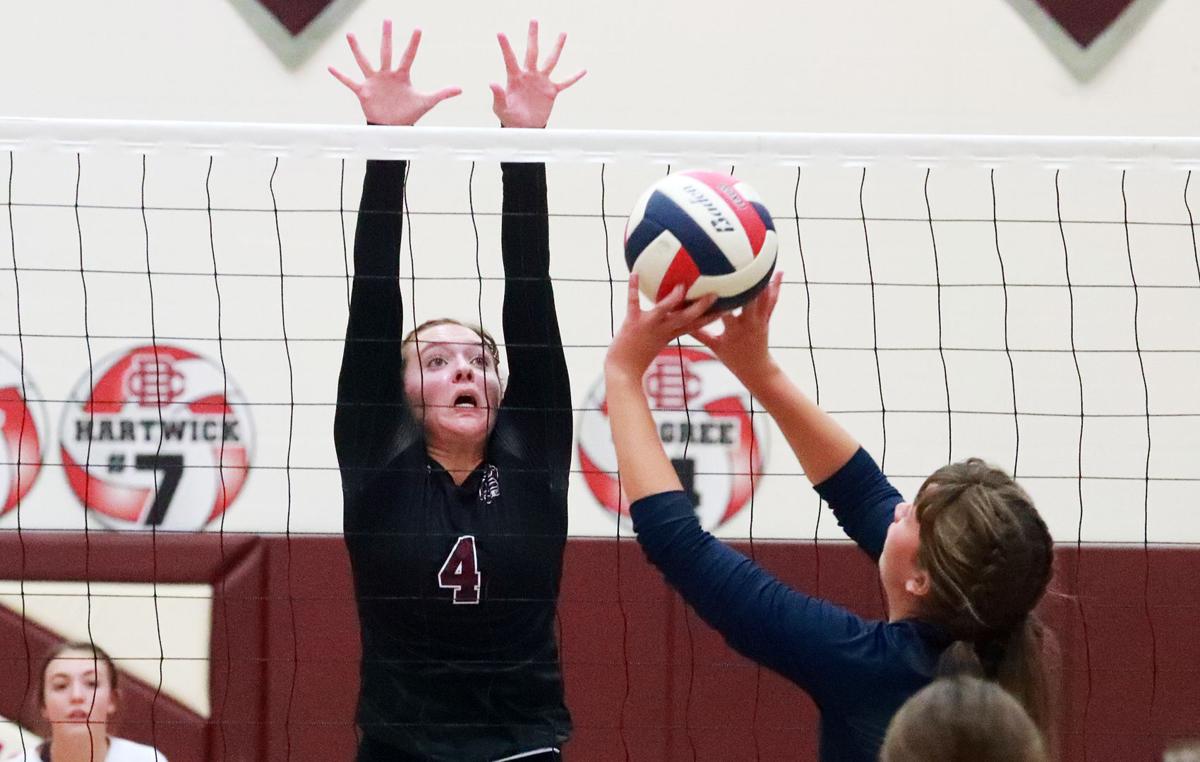 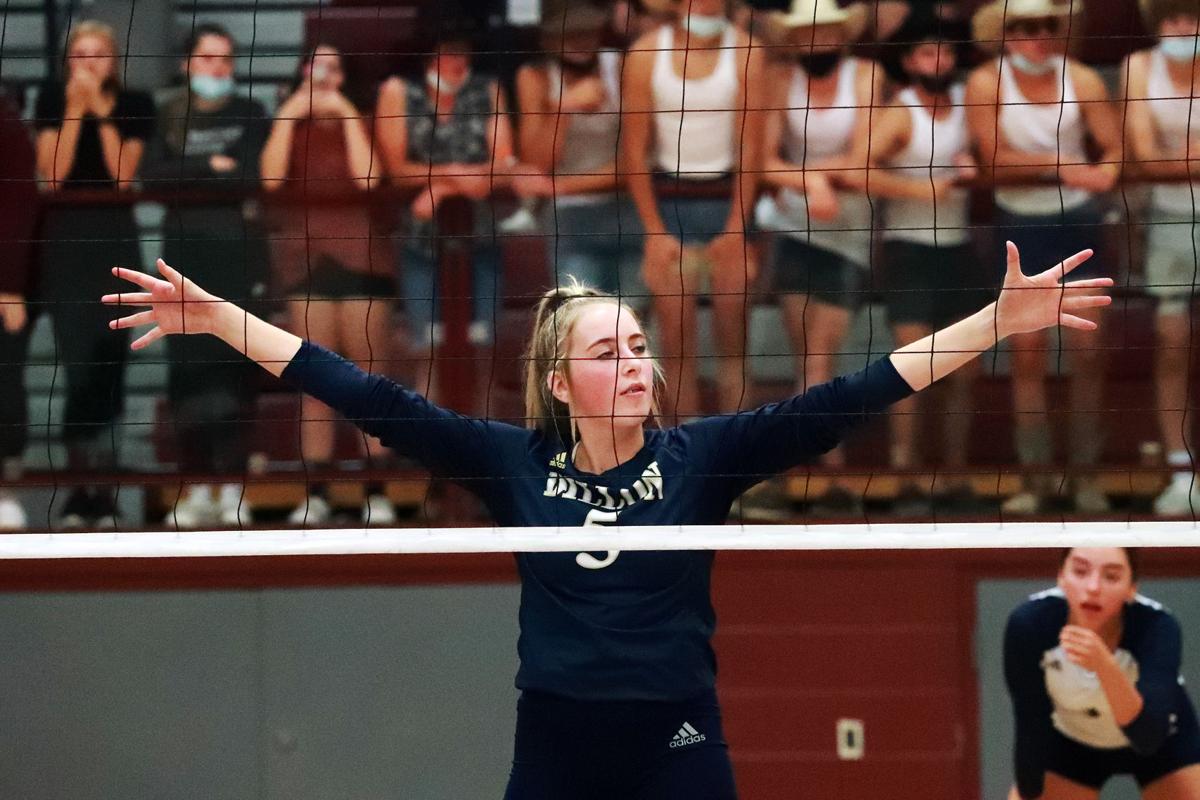 Dillon's Zoey Morast takes her spot at the net against Butte Central at the Maroon Activity Center in Butte. 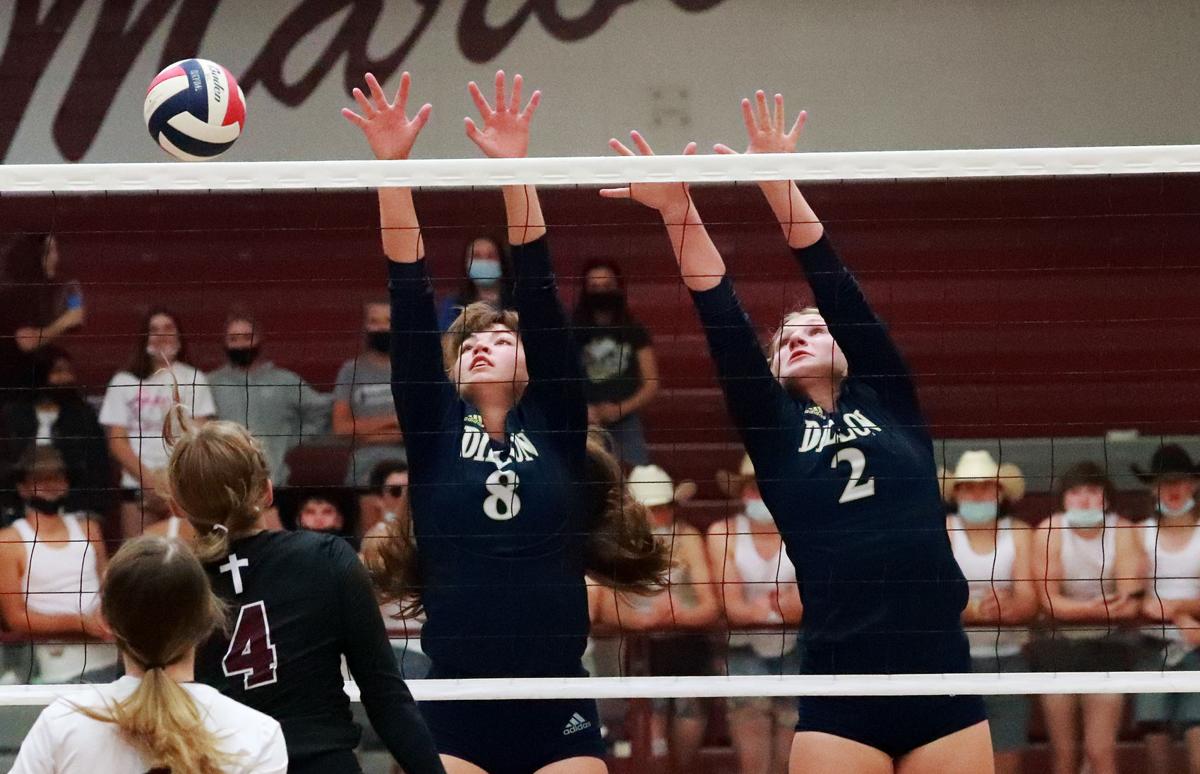 Dillon's Evey Hansen, left, and Jordyn Walker block at the net during a September match against the Butte Central Maroons in Butte. 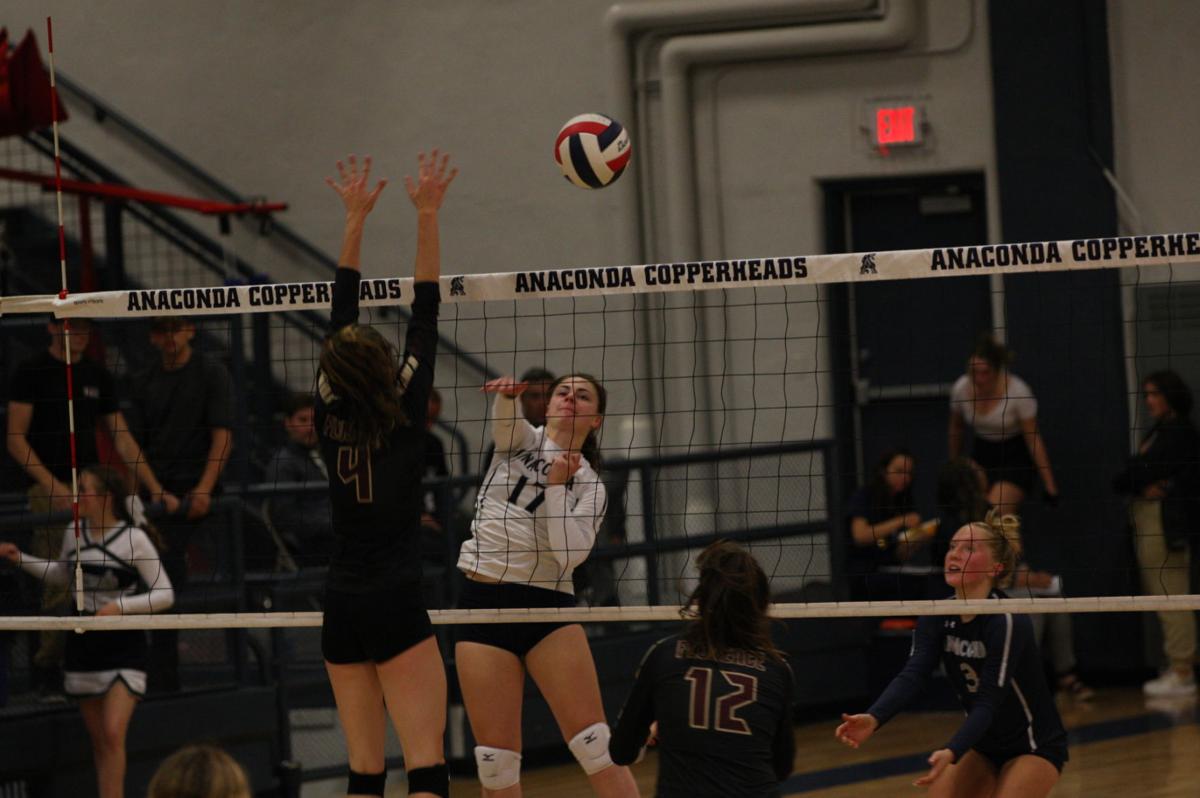 Dillon's Zoey Morast takes her spot at the net against Butte Central at the Maroon Activity Center in Butte.

Dillon's Evey Hansen, left, and Jordyn Walker block at the net during a September match against the Butte Central Maroons in Butte.

The annual Blocktober Classic volleyball tournament, hosted by Butte Central for more than 10 years, returns Friday. Class A and B teams from across the state will compete at the Maroon Activity Center and Butte Civic Center.

The pandemic canceled the Blocktober Classic last year but the tournament will return bigger than ever this year. All-Tournament passes cost $15 for adults, $10 for students and seniors. Facemasks are required inside the Maroon Activity Center and are encouraged inside of the Butte Civic Center.

The tournament was originally slated to include 26 teams but will host 25, separated into three pools, after Livingston withdrew from the tournament. Deer Lodge, Anaconda, Jefferson and Dillon will join Butte Central as the local schools participating. The tournament does not affect conference standings.

“It’s our first year hosting a tournament this big. We used to only bring in 12 teams for this tournament,” said Butte Central coach Becky Hancock. “Almost every Class A school is coming along with four or five B teams. It will be a great mid-season tournament to see where everyone is at.”

Pool play begins on Friday at 9 a.m. and matches will include one set to 30 points. Teams will be seeded for bracket play by their performances in pool play. Bracket play will be in a three-set format Saturday.

Talks of expanding the tournament have occurred in years prior but did not come to fruition until this season. Hancock said she is excited to see the return of the tournament in the biggest way it has ever seen.

“Last year was going to be the first year to expand this but COVID got in the way of that,” Hancock said. “I’m excited for it, especially because we don’t get to see a lot of the eastern teams or the ones up north. They’re all coming to this.”

The Maroons (7-3) will enter the tournament on a four-game win streak. While Hancock said her team has improved as the season has progressed, the Maroons will be without their setter in the tournament for personal reasons.

Butte Central, part of Pool B, will play their first of eight matches Friday against Whitefish at 9 a.m. at the Maroon Activity Center. She said her team is prepared for the tournament and the fun it will bring, but fatigue could set in late on Saturday.

"We're doing really well the last couple of weeks," Hancock said. "Our girls are playing really competitive and our game has come together, more solid. We're getting past the things we struggled with to begin the season."

"It's going to be a long day playing eight games," Hancock continued. "The pool games are only one game to 30 but that's still a lot of volleyball for one day. Our girls are ready to handle it but you might see some fatigue especially in the rotation."

Class B Jefferson will also compete in Pool B with Butte Central and will begin Friday's play against Havre around 9:40 a.m. Both the Panthers and the Maroons are in a pool with Billings Central, the defending Class A state champions.

The Panthers will enter the tournament after a regular season win over Big Timber. Jefferson coach Mike Majors said facing Billings Central and high-level talent will be a challenge but also an experience that will help his team.

“We just hope that the competition will make us better, and that’s often the case. You only get better when you play really good competition, and this is something the girls are really looking forward to – to play in a tournament that has so many Class A schools," Majors said.

In addition to Whitefish, Havre and Billings Central, East Helena, Florence, Ronan, and Stevensville will compete in Pool B Friday at the Maroon Activity Center.

While the tournament will consist of mostly Class A schools, Class B's Deer Lodge will be competing in Pool A with it's first match scheduled for Friday at 9 a.m. against Browning. Deer Lodge coach Kimberly Lamb voiced her excitement about being included in the tournament and acknowledged the stiff competition.

"We’re one of the four Class B schools that are in it, so it’s kind of an honor to be included in the tournament," Lamb said. "We are looking at it as a chance for growth. We’re not necessarily trying to win it, but just experiment with what we can do when we finish off our conference play next week.”

The Wardens will compete in their first Blocktober Classic this weekend but the Dillon Beavers have been a regular contender in the tournament. The Beavers are also in Pool A and will open play against Hardin at 9:40 a.m.

Charelle Hinkey, first-year coach of the Beavers, also said she is excited for the tournament. She said her team will face unique competition but in a low-pressure environment. The Beavers are 8-2 so far his season.

"It'll be a good mental break for the girls," Hinkey said. "It's not an actual conference tournament but it gives them a lot of touches, a lot of opportunity to play. The girls truly believe in themselves, the setters have been getting the ball to hitters and the hitters have been successful."

Miles City, Lewistown, Hamilton and Polson will also be competing in Pool A. The Butte Civic Center will host all Pool A matches beginning at 9 a.m.

Anaconda (14-3) will compete in Pool C alongside Columbia Falls, Corvallis, Glendive, Frenchtown, Laurel, Libby and Lockwood. The Copperheads will open pool play against Lockwood at 9 a.m. at the Butte Civic Center.

"Anaconda has participated in the past. The tournament was canceled last year so this will be my first one," said Anaconda coach Korey Rivers. "We've made a lot of changes this year, as far as positions go. But we're playing better than ever."

"I feel like we're ready for this tournament," Rivers continued. "We'll play some teams we've never played before and we are all looking forward to it."