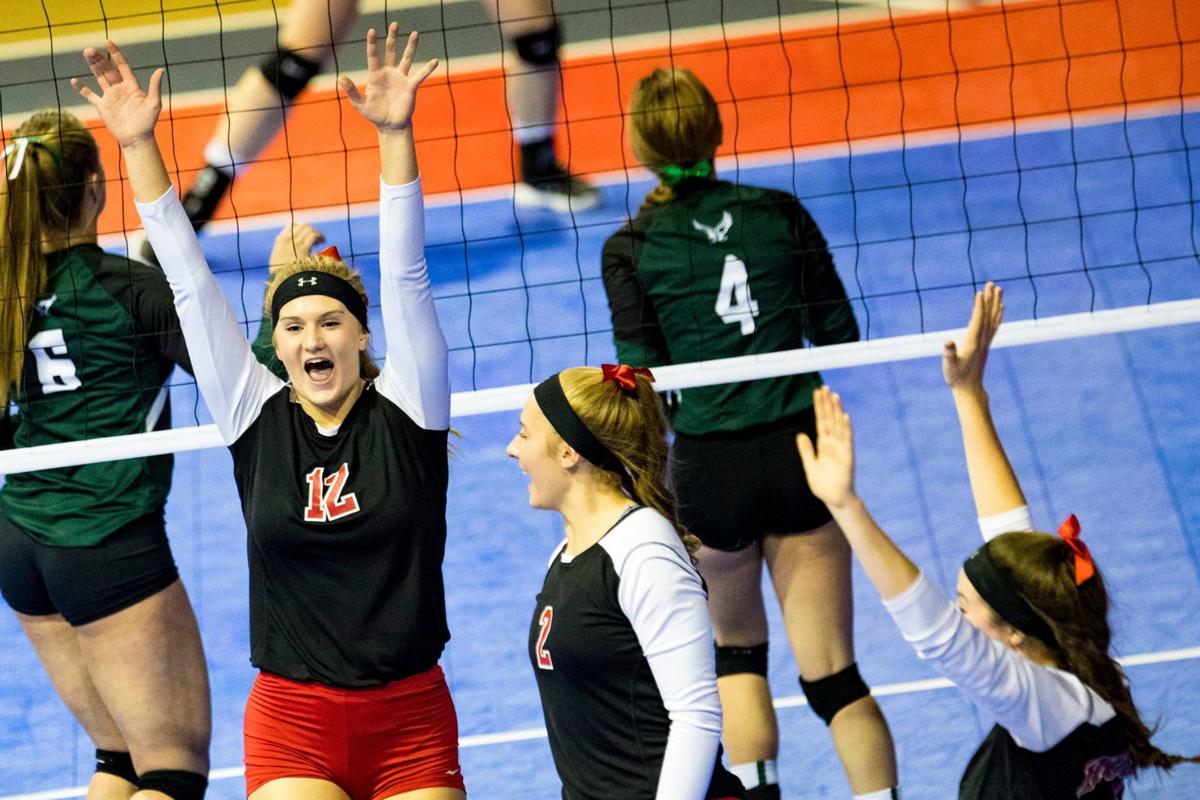 Huntley Project's Alana Graves cheers after a point during the Red Devils' match against the Joliet J-Hawks in the undefeated semifinal round of the State B Volleyball Tournament at Montana State University's Brick Breeden Fieldhouse Friday. 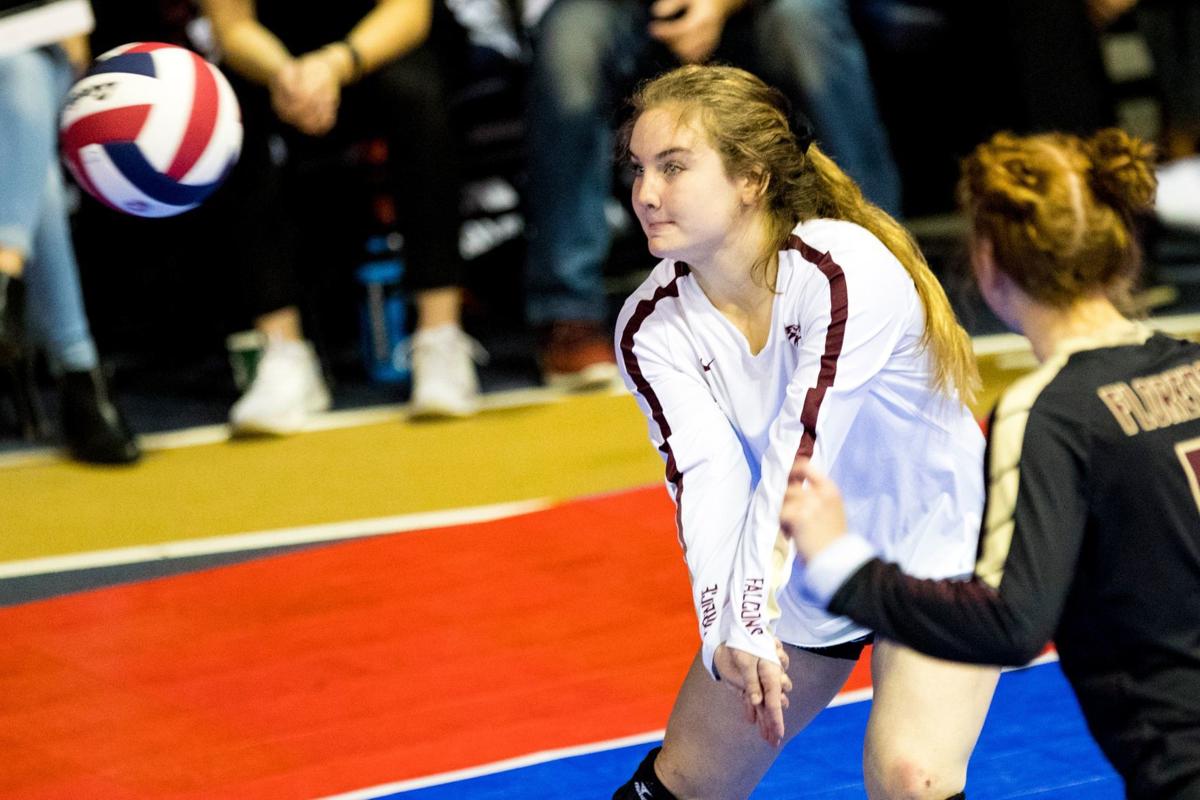 Florence-Carlton's Kolbi Wood (11) bumps the ball during the Florence-Carlton Falcons' elimination match against the Glasgow Scotties in the Class B State Volleyball Tournament at Montana State University's Brick Breeden Fieldhouse in Bozeman on Friday, November 15, 2019. 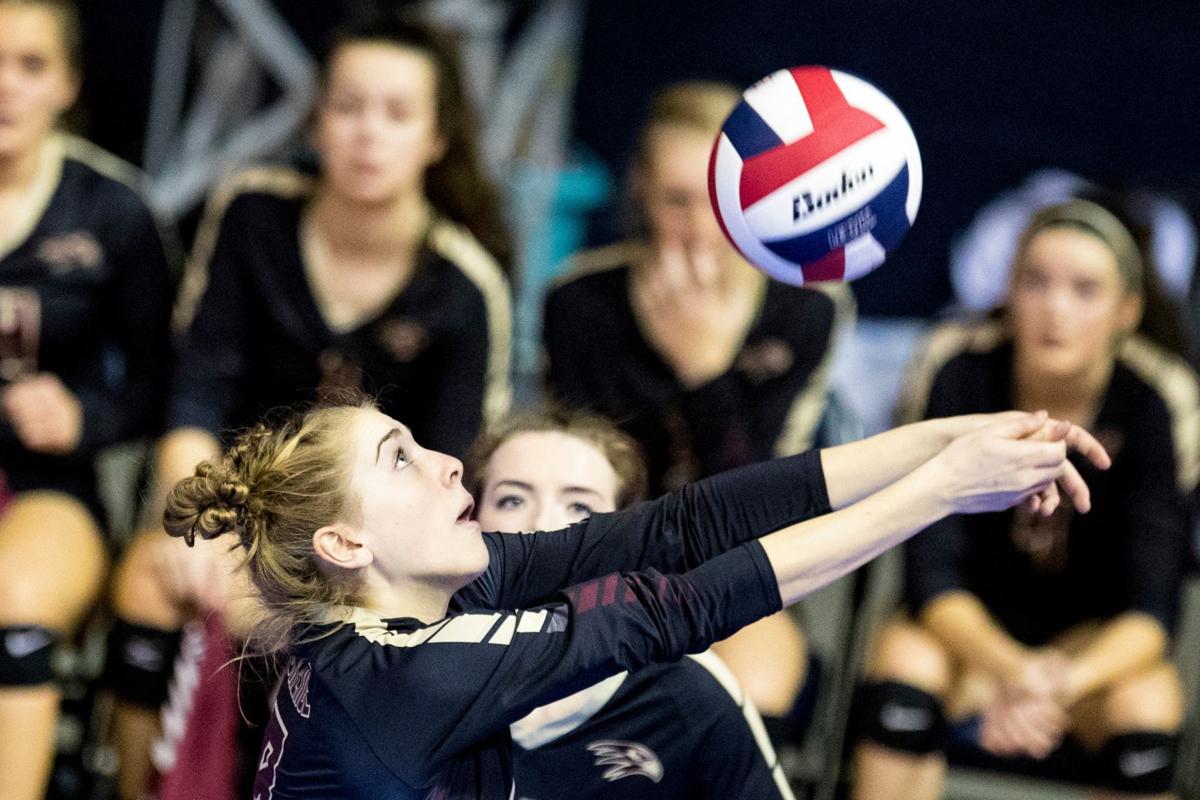 Florence-Carlton's Kasidy Yeoman (9) bumps the ball during the Townsend Bulldogs elimination match against the Florence-Carlton Falcons in the Class B State Volleyball Tournament at Montana State University's Brick Breeden Fieldhouse in Bozeman on Friday, November 15, 2019.

Huntley Project's Alana Graves cheers after a point during the Red Devils' match against the Joliet J-Hawks in the undefeated semifinal round of the State B Volleyball Tournament at Montana State University's Brick Breeden Fieldhouse Friday.

Florence-Carlton's Kolbi Wood (11) bumps the ball during the Florence-Carlton Falcons' elimination match against the Glasgow Scotties in the Class B State Volleyball Tournament at Montana State University's Brick Breeden Fieldhouse in Bozeman on Friday, November 15, 2019.

Florence-Carlton's Kasidy Yeoman (9) bumps the ball during the Townsend Bulldogs elimination match against the Florence-Carlton Falcons in the Class B State Volleyball Tournament at Montana State University's Brick Breeden Fieldhouse in Bozeman on Friday, November 15, 2019.

BOZEMAN — Huntley Project tied its own record for consecutive wins and advanced to another Class B championship match with a sweep of Joliet in Friday’s undefeated semifinal at Brick Breeden Fieldhouse.

“We really, really want to end with 100 (straight) wins this year as a team,” said Emily Poole, who had three kills down the stretch to help the Red Devils ice the sweep. “I think that’d be kind of cool for the seniors to go out with a bang.”

Of course, to get to 100, the Reds Devils will have to win Saturday’s championship against an opponent to be decided. And if they do that, it would also be their third consecutive title and would tie the program with Billings Senior for most volleyball championships in the state at 12.

But coach Project coach Iona Stookey doesn’t want to get too far ahead of things. She was still sweating out the victory over Joliet. The J-Hawks have been the only team to take a set from Project this season, and Stookey isn’t one to overlook anything or anyone.

“I was nervous, I was nervous,” Stookey said, whose team improved to 32-0, including eight victories over the J-Hawks. “That’s a big match. That’s the one you want to win to be in the driver’s seat. Hopefully, we can bring our A game tomorrow and take care of business.”

Poole finished with a match-high 19 kills, followed by 11 from Alana Graves. Poole also had 15 digs, and Josie Hasler added 14 digs and nine kils. Addy Hultgren had 38 assists and 10 digs.

The J-Hawks now have a date in the third-place match Saturday morning at 10 a.m. A win would put Joliet into the championship, and though her team is winless in those eight tries against the Red Devils, coach Colette Webber would be more than happy to face their nemesis once again.

“Huntley’s amazing,” Webber said. “Iona adjusts to whatever you’re doing. If you block them once, the next time they come with something else. She’s a tough coach to coach against. But we get better every time we play them and they make us better.”

Makenna Bushman had 13 kills and 12 digs for Joliet. Shayla Webber finished with 21 assists, 17 digs and seven kills, and Joelle Luoma had nine kills and 13 digs.

It was already a long day, and Florence-Carlton was just making it longer. The Falcons wasted eight match points before Sarah Hopcroft put the finishing touches on a 25-17, 19-25, 25-17, 25-23 victory over Choteau in the fourth-place match.

It was the third victory of the day for the Falcons, whose day started at 10 a.m. and finished nearly 12 hours later.

“It’s just a lot of grit and a lot of heart and just wanting to play for one another,” said Hopcroft, a senior who had 28 kills in the match. “That’s all. You just want to play. Don’t give up.”

The Falcons expect no less from themselves, however. They did the same thing Hopcroft’s sophomore season, losing their first match, and ultimately wound up in the championship. They also reached the title match last season, a repeat loss to Huntley Project.

They’ll open Saturday at 10 a.m. against Joliet in the third-place match, and still have a shot at a third straight trip to the championship match.

“No matter what, we get hardware,” Hopcroft said. “Senior year, going out, that’s awesome.”

Ellie Lee had 13 kills for Choteau, which was always trying for its third win of the day. But the Bulldogs came up one short.

The Bulldogs were led by Ellie Lee and Nicole Krone, who both had eight kills. Lee added three blocks, while Krone added four aces. Christine Funk had 12 digs and 19 assists.

Bailey Johnson had 11 kills and 11 assists for Shelby. Brooke Luly led with 13 assists, Maddison Underdal had five blocks, and Brielle Aklestad had 14 digs.

Sarah Hopcroft had 21 kills and 29 digs to lead Florence-Carlton, which trailed 24-22 and 24-23 in the third set before taking it. Emma Stensrud had seven blocks and Kolbi Wood had 27 digs.

Nicole Krone added 23 digs and Christine Funk had 21 assists for the Bulldogs.

Anaconda was led by Mia Sullivan’s six kills and Megan Reich’s 19 digs. Logan Stetzner had 13 assists for the Copperheads, who made their first state appearance since 2014, their last season at Class A.

Florence-Carlton rebounded from Thursday’s first-round loss to defeat the Scotties 25-8, 25-22, 25-21, marking the first of a needed three wins on the day to stay in the running.

Sarah Hopcroft had 14 kills, 12 digs and five blocks to lead Florence-Carlton. Halle Christopherson and Kasidy Yeoman each had 13 assists, and Kolbi Wood had 13 digs. Emma Stensrud also had five blocks.

Glasgow, which was making its first state appearance since 2009, was led by Laura Ross’s six kills. Rachelle Glaser had 18 assists and nine digs, and Keely Fossum finished with 15 digs.

Roundup of coverage from the second day of the 2019 state volleyball tournament Nov. 15, 2019 from Brick Breeden Fieldhouse in Bozeman.