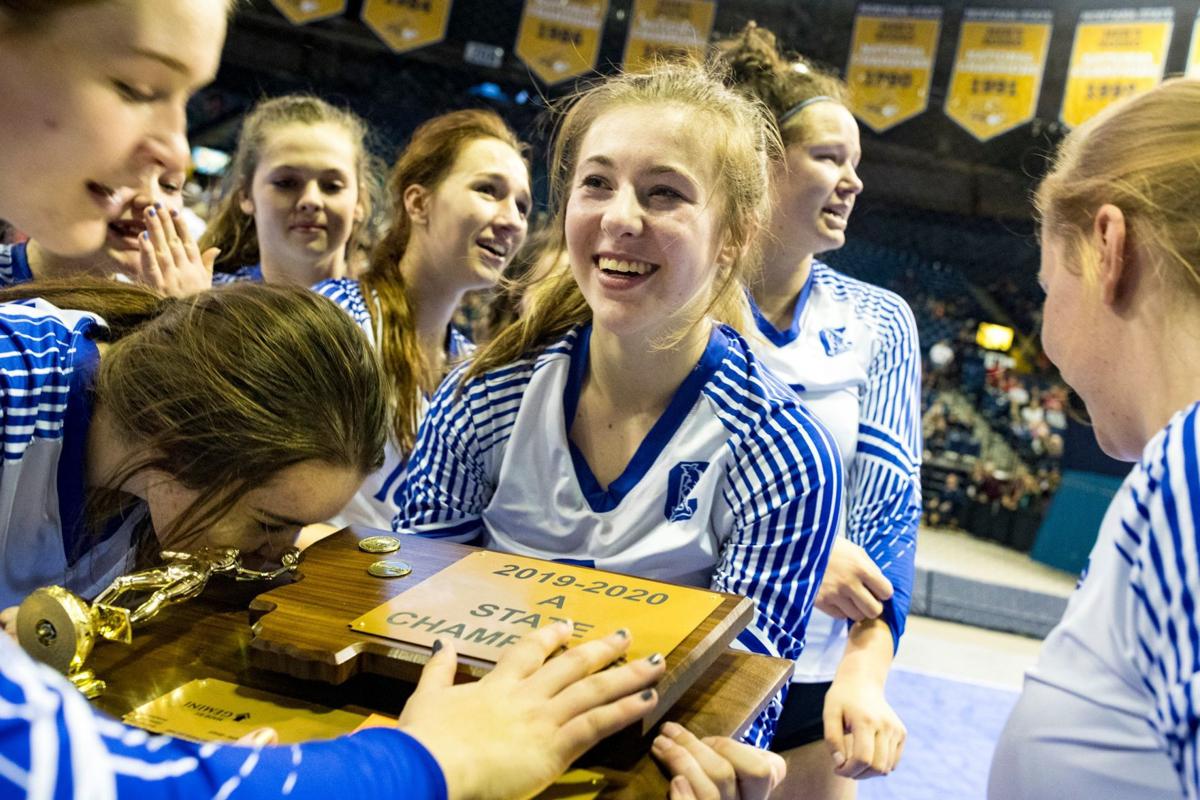 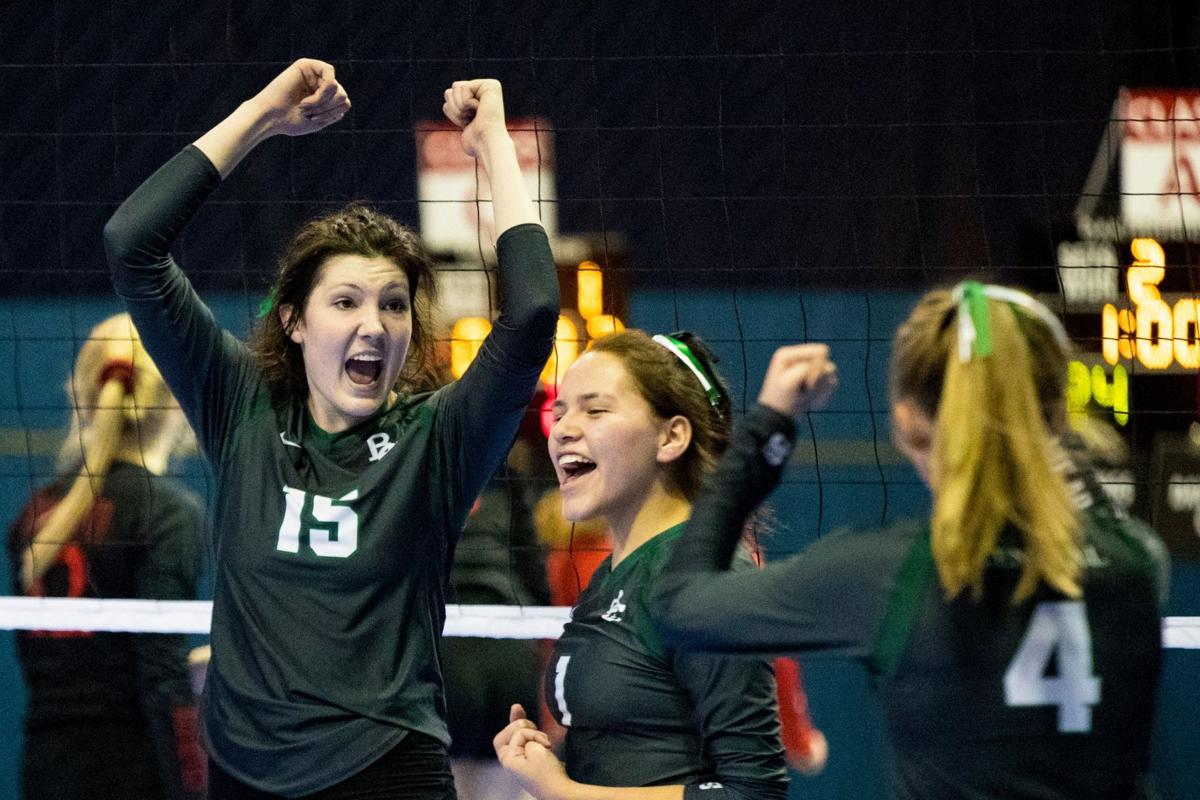 Corvallis senior Hannah Hutchison was pulled aside and asked how many photos she’d been in.

“I honestly have no idea,” she said. “But they’re calling me for another one.”

That’s how it is for state champions, a label the Blue Devils surely earned after they dethroned Billings Central 25-18, 25-21, 25-21 in the Class A title match Saturday afternoon at Brick Breeden Fieldhouse.

The sweep completed an impressive tournament for Corvallis, which earned its first championship since 2013. The Blue Devils did so under first-year coach Laurie Jones, whose eyes, like those of her players, were ringed with tears.

“We were shooting for the championship game, we knew it was possible,” Jones said. “We knew months ago that Billings was the favorite but that fueled us. We talked about it. So in practice we’d say, ‘what are the other teams doing? How hard are other teams working?’ So building up to state we knew that we were mentally prepared and that we could do it.”

After beating Central in five sets in Friday’s undefeated semifinal, the Blue Devils knew they’d have the safety valve of needing to be beaten twice Saturday in the double-elimination format. But they didn’t rely on that, instead they took control of the first set early, then squeezed past the Rams late in both the second and third sets.

“I’m actually quite speechless,” said senior Isabel Evans, who, on the court, is one of the Blue Devils’s most vocal leaders. “Our senior year, we’ve worked so hard for it. It’s awesome.”

The Rams were trying for their third consecutive championship. Though Friday’s loss dealt them a blow, there was still hope considering how close they had come to winning that first match with Corvallis. But after dispatching Glendive in three sets in the loser-out semifinal Saturday morning, the Rams had to settle for the second-place trophy.

“Obviously, not what we set out to do at the beginning of the season,” said Rams coach Kylie Reitz, who called the Blue Devils a great team. “But we’ve had a fun run. Playing in four state championships in four years is nothing to be disappointed in. I know that our girls played hard, we just got beat by a better team today.”

The title match brought an interesting juxtaposition of coaches. While Jones won a title in her first season with Corvallis, Reitz, who is in her sixth season with Central, announced she was leaving. A work promotion with Nalco Champion has her leaving for Bellingham, Washington early next week.

“I’ll always be grateful for this time, I’ll always miss it to a certain extent,” said Reitz, who has earned two seconds and two titles in her final four seasons. “I know whoever they hire, they’ll be in great hands and I’m hoping to back her next year as fan.”

As for Jones, well, her team will always have extra meaning to her, too.

“This is my first season, no other team can be my first as head coach, so they’ll always have a special place with me,” she said.

Olivia Moten-Schell led the Rams with 10 kills and nine digs, and Grace Zeier had 15 digs.

Corvallis received 10 kills from Madeline Gilder and seven each from Hutchison and Evans. Evans also had five blocks.

It was a loss, but in the annals of Glendive volleyball history, an historic loss.

The Red Devils were swept by Billings Central 25-20, 25-19, 25-19 in Saturday's loser-out semifinal, but they leave Bozeman with the third-place trophy and the knowledge it’s the first state trophy in program history.

“It’s a great step for Glendive,” coach Tiffaney Egan said. “We’re really making some good momentum. We’ve got some phenomenal athletes and we’ve got a lot of heart over in our area.”

This was the third consecutive state appearance for the Red Devils, but just the fifth overall in the history of the program. Following the loss, the players huddled around Egan on the Brick Breeden Fieldhouse floor for several minutes as they tried to soak in the accomplishment through the tears of disappointment of not advancing further in the tournament.

Later, cheerleaders, coaches, student managers joined the players for a group photo with the trophy. There were a few more smiles, then.

“They have a glimpse of hard work, sometimes some good days sometimes some hard days, but a little bit of the taste of success out of that,” Egan said. “Not everybody gets that. Sometimes people can work their guts out and they don’t get to really feel this successful, so I’m really proud of them.”

Central, which advanced to the championship match with the win, was led by Olivia Moten-Schell’s 17 kills and 16 digs.

Meadow Torres had 13 kills and Karsen Murphy had eight kills, 14 assists and six blocks for Glendive.