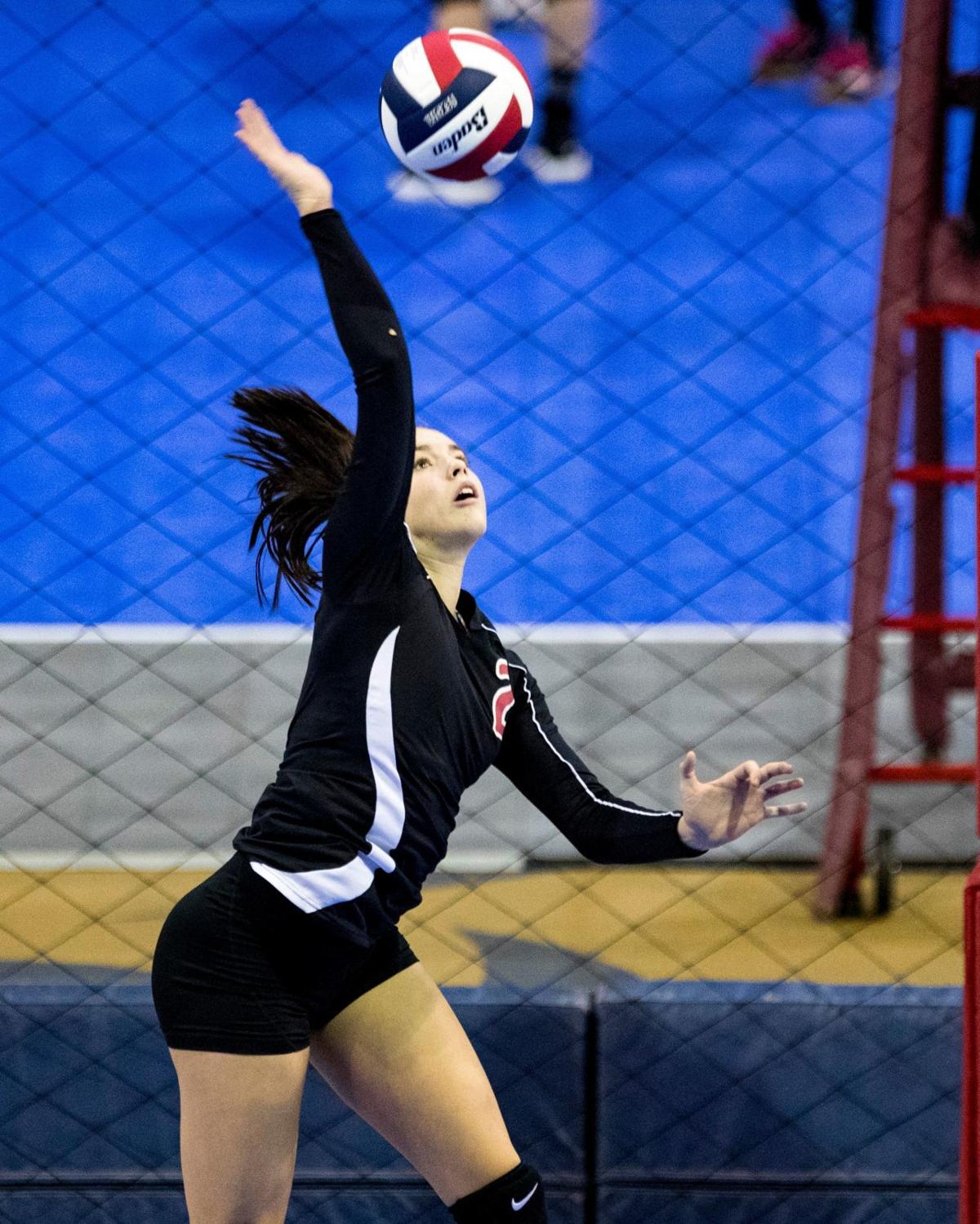 Glendive's Madison Wahl (2) spikes the ball during the Butte Central Maroons' first round match against the Glendive Red Devils in the Class A State Volleyball Tournament at Montana State University's Brick Breeden Fieldhouse in Bozeman on Thursday, November 14, 2019. 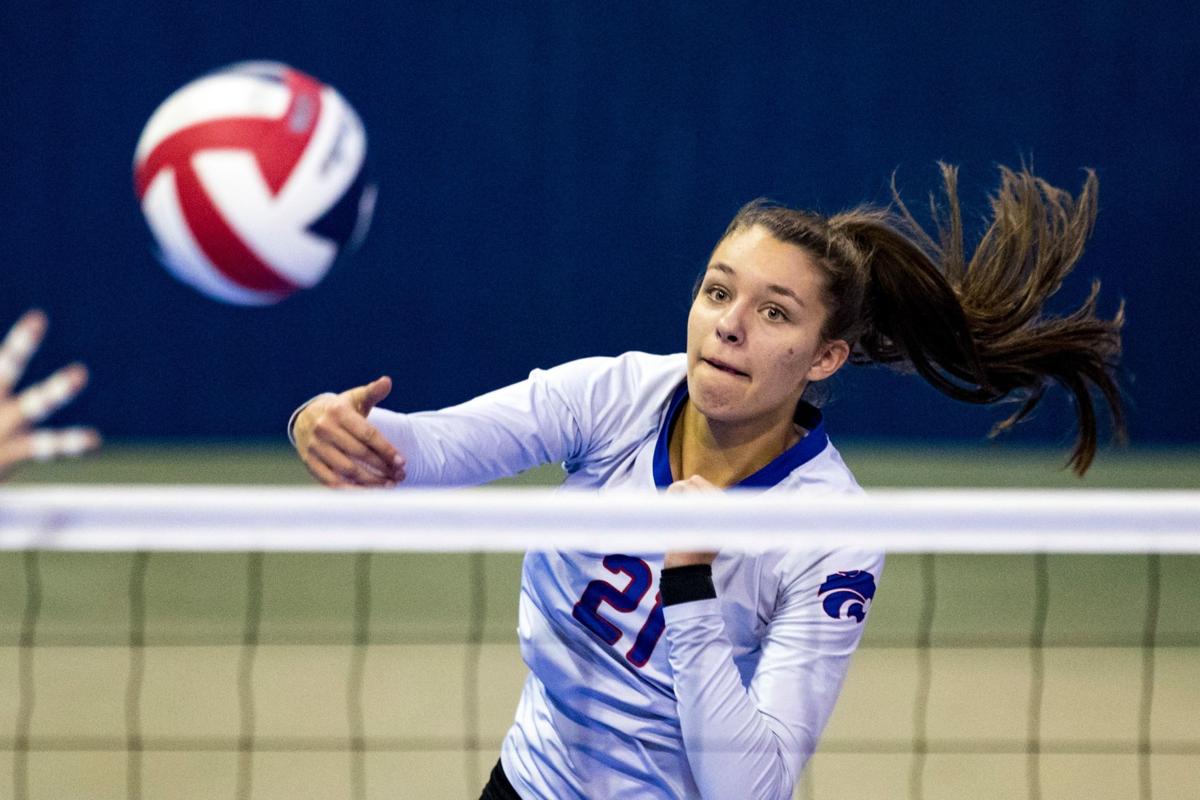 Columbia Falls' Madysen Hoerner (21) spikes the ball during the Columbia Falls Wildkats' first round match against the Hardin Bulldogs in the Class A State Volleyball Tournament at Montana State University's Brick Breeden Fieldhouse in Bozeman on Thursday, November 14, 2019. 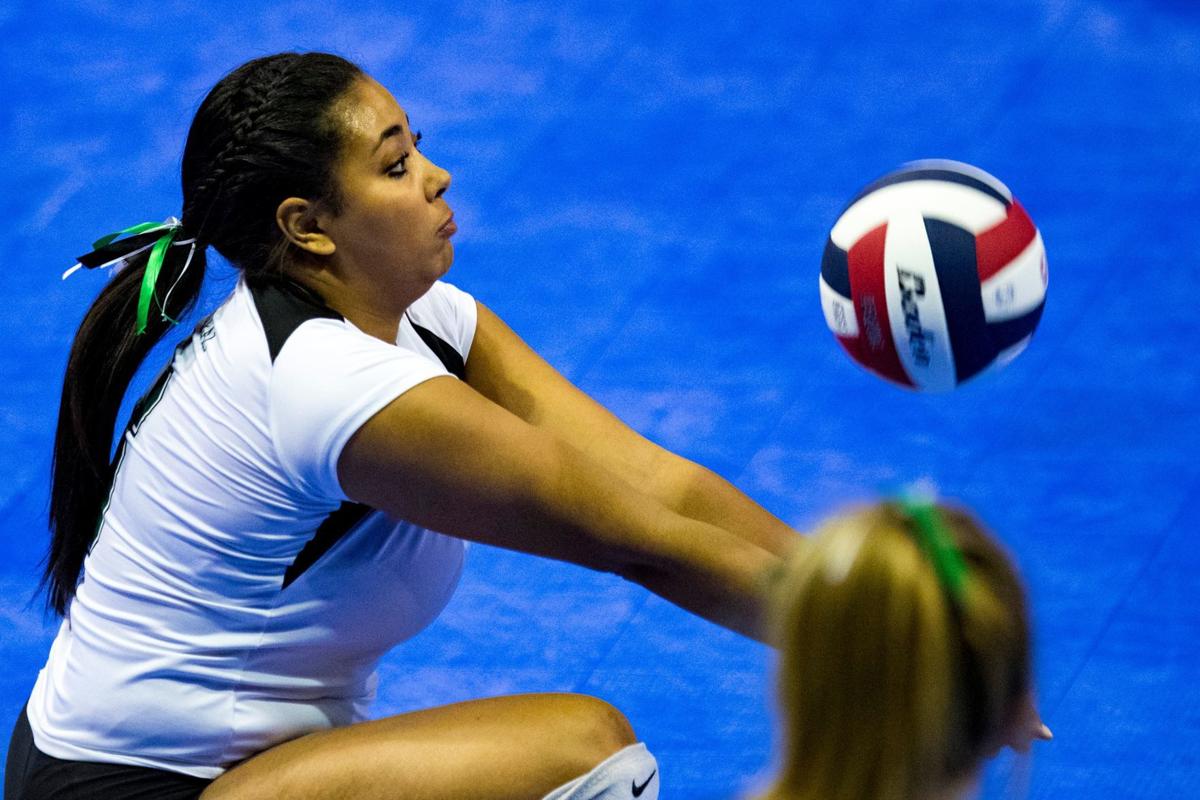 Billings Central's Olivia Moten-Schell bumps the ball against the Polson Pirates in a State A volleyball first-round volleyball match at Montana State University's Brick Breeden Fieldhouse in Bozeman on Thursday. 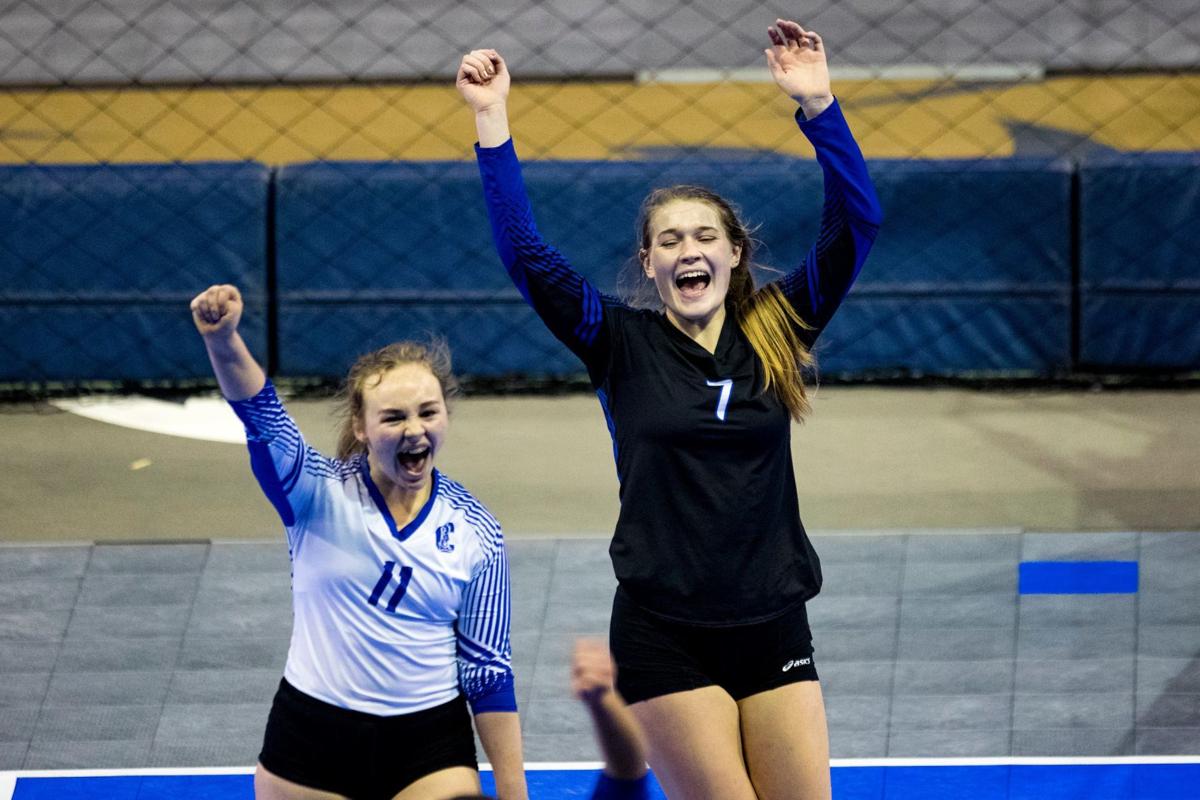 Corvallis' Madeline Gilder (7) cheers after a point during the Corvallis Blue Devils' first round match against the Havre Blue Ponies in the Class A State Volleyball Tournament at Montana State University's Brick Breeden Fieldhouse in Bozeman on Thursday, November 14, 2019.

Glendive's Madison Wahl (2) spikes the ball during the Butte Central Maroons' first round match against the Glendive Red Devils in the Class A State Volleyball Tournament at Montana State University's Brick Breeden Fieldhouse in Bozeman on Thursday, November 14, 2019.

Columbia Falls' Madysen Hoerner (21) spikes the ball during the Columbia Falls Wildkats' first round match against the Hardin Bulldogs in the Class A State Volleyball Tournament at Montana State University's Brick Breeden Fieldhouse in Bozeman on Thursday, November 14, 2019.

Billings Central's Olivia Moten-Schell bumps the ball against the Polson Pirates in a State A volleyball first-round volleyball match at Montana State University's Brick Breeden Fieldhouse in Bozeman on Thursday.

Corvallis' Madeline Gilder (7) cheers after a point during the Corvallis Blue Devils' first round match against the Havre Blue Ponies in the Class A State Volleyball Tournament at Montana State University's Brick Breeden Fieldhouse in Bozeman on Thursday, November 14, 2019.

Evans and the Corvallis Blue Devils beat the Glendive Red Devils 25-20, 21-25, 25-18, 25-14 at Brick Breeden Fieldhouse earning a trip to the unbeaten semifinal on Friday.

Question after question came Evans’s way, and the smile stayed plastered on her face the whole time.

“Being here in (this) atmosphere and having all the crowd, even if it’s not someone cheering for you, just having the energy of other people here, it just really makes it worth doing,” said Evans, who had five blocks. “Makes you realize the sport you love.”

The Blue Devils love the spot they’re in. They’ll play Billings Central Friday at 6 p.m., with the winner advancing to the state championship. Even just by being in the undefeated semifinal, both teams have guaranteed themselves at least third place in the tournament.

“We’re ready to work hard,” Corvallis coach Laurie Jones said. “And I think that’s all, really, you can ask of your team at state, is just for them to be willing to go out there and try their best. So that’s what we’re going to do.”

Madeline Gilder led the Blue Devils with 18 kills and she added 12 digs. Hannah Hutchinson finished with 12 kills, while Hannah Martin had 33 assists and 15 digs.

Not once, but twice, the two-time defending Class A champion Rams had to flash some mettle.

Following the third-set loss, Rams coach Kylie Reitz gathered her veteran team and told them they were fine. And it turned out they were.

“I think it’s a sign of a team that believes in themselves,” Reitz said. “And understands, because they’ve been here before, what it’s going to take.”

Olivia Moten-Schell had 14 kills and Cindy Gray added 12 kills for the Rams. Four players reached double figures in digs — it was a lack of pride in defense, Reitz felt, that led to the third-set loss — led by Kristina Schafer’s 14. Maria Stewart had 14 digs, as well, to go with her 41 assists, and Grace Zeier and Izzy Erickson had 13 each.

Reitz said a dig by Zeier early in set four set the tone for the rest of the match.

“We just know we can’t settle for games like that, mental relapses,” said Moten-Schell. “We need to come prepared to play every single game.”

Central has played in each of the last three championship matches and can guarantee another trip with a win in Friday’s undefeated semifinal.

Mady Hoerner led Columbia Falls with 13 kills. Dillen Hoerner had 11 kills and 14 digs, and Angellica Street had a match-high 21 digs.

Corvallis coach Laurie Jones has been around the growth of the Blue Devils’ volleyball program for some time.

She graduated from the school in 2005, the first time the Blue Devils won a divisional title, and has been coaching the school’s junior varsity team for 11 seasons as Corvallis won a state title in 2013 and finished third the past two seasons.

Thursday, she was on the bench as the Blue Devils’ head coach in their 25-17, 25-20, 25-27, 25-21 first-round win over Havre in her first state match as head coach. Jones took over for Kasey Arceneiga, who stepped down last year after 10 seasons with the Blue Devils.

“There were adjustments in the beginning, I mean, no one’s exactly the same,” Jones said. “There’s some things I did differently that they adapted to really quickly. They were open to all of those suggestions, recommendations and growing pains and we just worked through it as a team.”

Corvallis had 54 kills to Havre’s 18. Madeline Gilder led the way with 15 kills, followed by Hanna Hutchison and Isabel Evans with 12 each. Hannah Martin had 43 assists and 18 digs, and Casey Fison had 19 digs.

Glendive senior Meadow Torres said the Red Devils had a little help in their first-round sweep of Butte Central.

The Red Devils won 25-16, 25-15, 25-20 and afterward, Torres talked about the loss of the team’s longtime bus driver Ken Zimmer, who passed away Tuesday morning after a long battle with a viral infection.

Zimmer, 76, had driven team buses for both Dawson County High School and Dawson Community College in Glendive for decades. The team visited Zimmer at a Billings hospital a couple weeks ago when they were in town to play Billings Central.

“Having that happen really helped us push, because we knew he’d be there with us on the court,” Torres said after she recorded a match-high 20 kills for the Red Devils. “He’s been our biggest fan and it was just super hard to see him go. But we’re happy he’s in a better place now.”

Ashley Clapp had 17 digs, Torres 16 and Tiana Carney 15 for the Red Devils, who are making their third consecutive trip to the state tournament. They had been 0-2 before this first-round win.

“This was a big goal for us,” Torres said, “We’re happy to accomplish it. This is big for us. We’re going on to our next goals now and hoping to keep going.”

Columbia Falls coach Jolandie Brooks wanted her team to be intimidating. Even if they didn’t feel that way, show it.

Fake it until you make it, so to speak.

The Wildkats didn’t have to fake much. They swept Hardin in the first round 25-21, 25-10, 25-17 to advance to the second round later in the day against Billings Central.

Dillen Hoerner and Mady Hoerner both had 11 kills for the Wildkats, who limited Hardin to 25 kills.

“I thought for our first match at state we played fairly clean,” Brooks said. “That was our goal. Play clean, stay aggressive, see what happens.”

Both Hoerners had two aces, while Kamber Brown had 37 assists and three blocks.

Hardin plays Polson in Friday’s early loser-out round at 10 a.m.

Trying to win its third consecutive Class A volleyball championship, Billings Central got off to a good start with a three-set sweep of Polson in the first round.

The Rams received 17 kills from Olivia Moten-Schell and 33 assists and 10 digs from Maria Stewart to advance to the quarterfinals later in the day.

With the help of a five-point serving run by Carlyn Whitney, the Rams turned away what turned out to be the Pirates’ biggest threat in the second set.

Maggie Todd had 12 kills and Ara Mercer had 15 digs to lead the Pirates, who made their first appearance at state since 2011.

“We didn’t pass great, so that hurt us,” Polson coach Lizzy King said. “And we were a little bit timid. I don’t know if that’s from being our first time and getting used to the court a little bit. Everything didn’t quite click in that game.”

This gallery will be updated throughout the day.

Roundup from the first day of the 2019 state volleyball tournament from Bozeman.