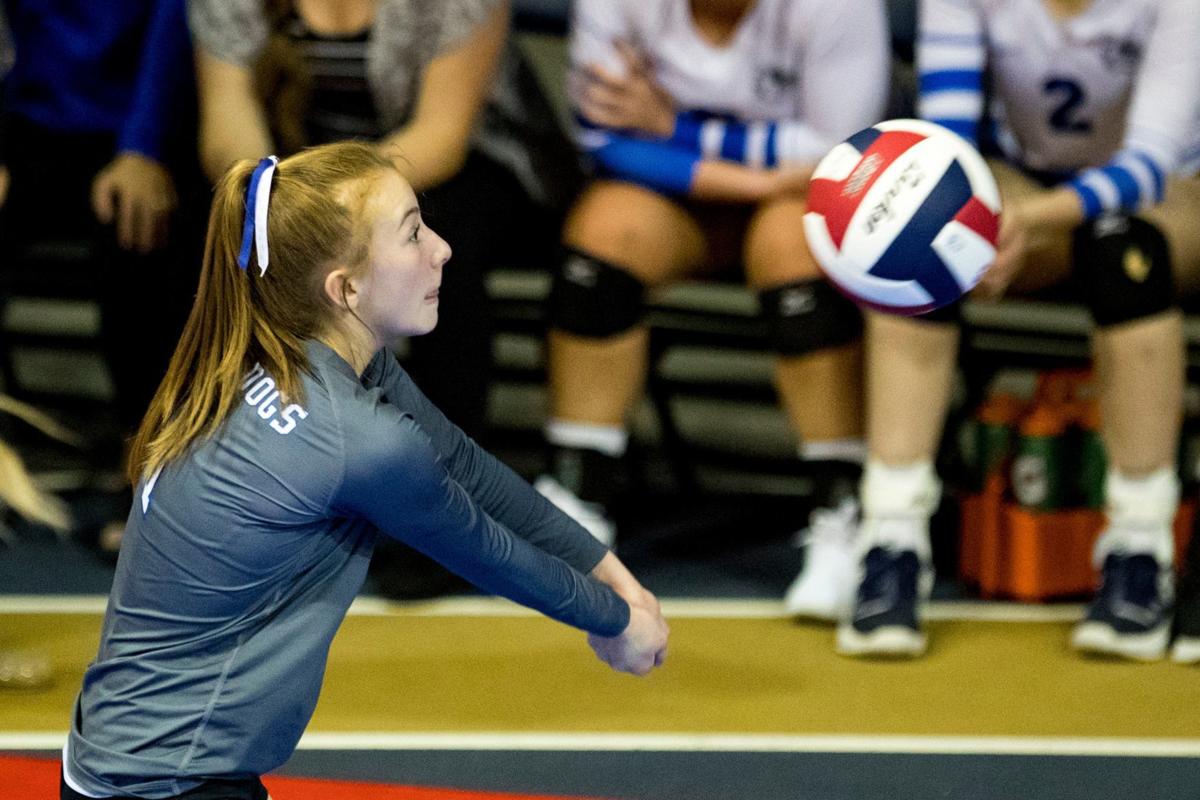 Townsend's Alleigh Burdick (1) bumps the ball during the Choteau Bulldogs' first round match against the Townsend Bulldogs in the Class B State Volleyball Tournament at Montana State University's Brick Breeden Fieldhouse in Bozeman on Thursday, November 14, 2019. 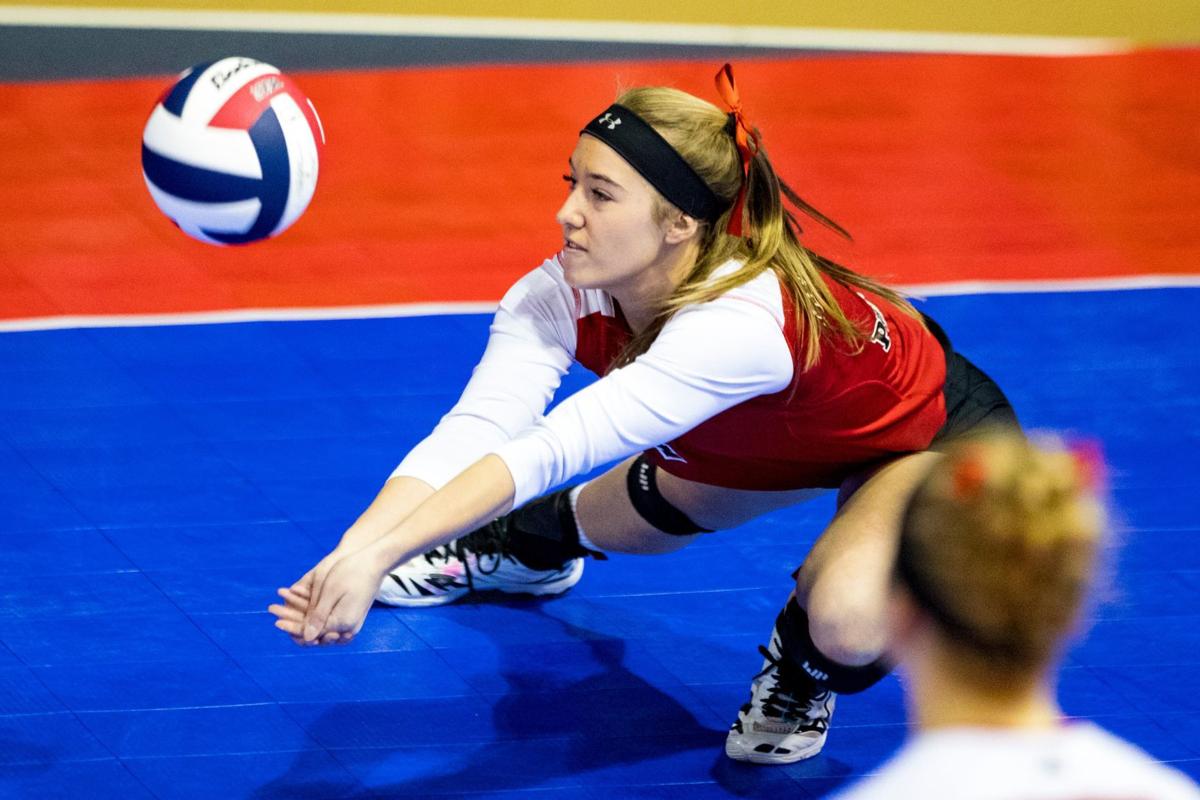 Huntley Project's Josie Hasler bumps the ball during the Glasgow Scotties' first round match against the Huntley Project Red Devils in the Class B State Volleyball Tournament at Montana State University's Brick Breeden Fieldhouse in Bozeman on Thursday. 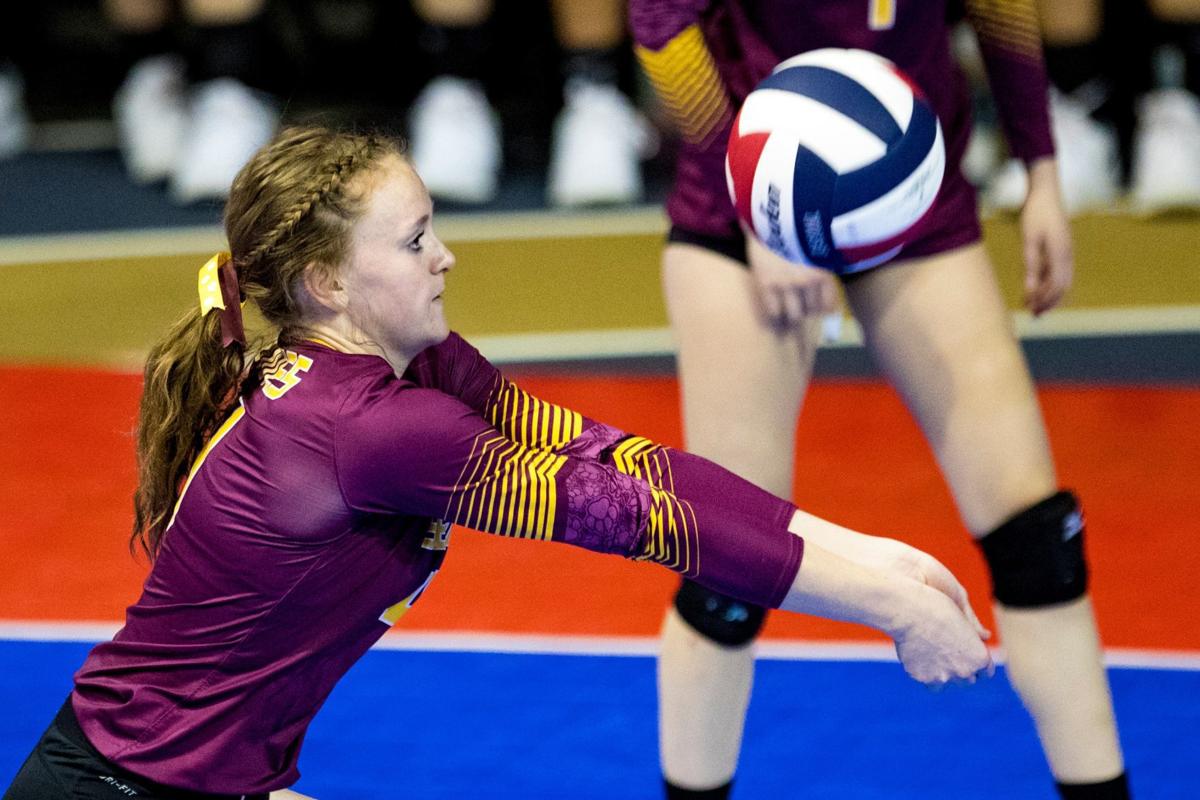 Shelby's Brielle Aklestad (4) bumps the ball during the Shelby Coyotes' first round match against the Florence-Carlton Falcons in the Class B State Volleyball Tournament at Montana State University's Brick Breeden Fieldhouse in Bozeman on Thursday, November 14, 2019. 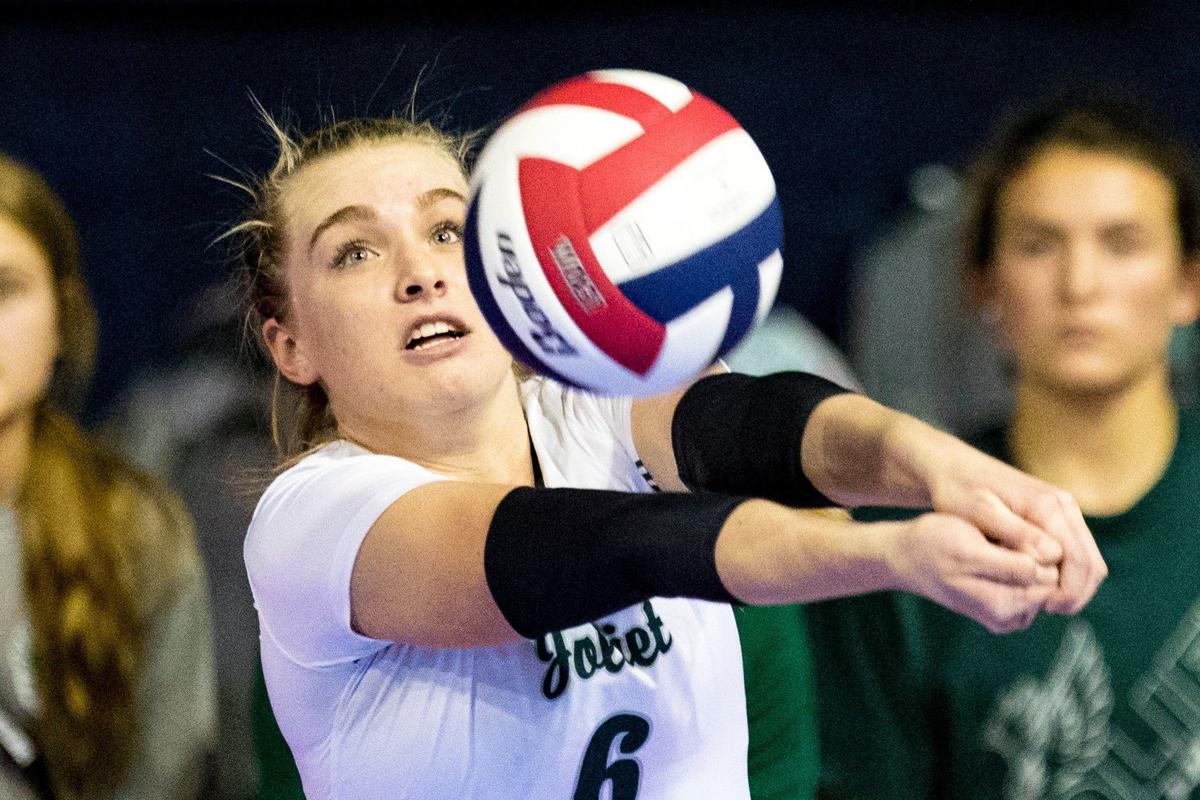 Joliet's Skyler Wright (6) bumps the ball during the Joliet J-Hawks' first round match against the Anaconda Copperheads in the Class B State Volleyball Tournament at Montana State University's Brick Breeden Fieldhouse in Bozeman on Thursday, November 14, 2019.

Townsend's Alleigh Burdick (1) bumps the ball during the Choteau Bulldogs' first round match against the Townsend Bulldogs in the Class B State Volleyball Tournament at Montana State University's Brick Breeden Fieldhouse in Bozeman on Thursday, November 14, 2019.

Huntley Project's Josie Hasler bumps the ball during the Glasgow Scotties' first round match against the Huntley Project Red Devils in the Class B State Volleyball Tournament at Montana State University's Brick Breeden Fieldhouse in Bozeman on Thursday.

Shelby's Brielle Aklestad (4) bumps the ball during the Shelby Coyotes' first round match against the Florence-Carlton Falcons in the Class B State Volleyball Tournament at Montana State University's Brick Breeden Fieldhouse in Bozeman on Thursday, November 14, 2019.

Joliet's Skyler Wright (6) bumps the ball during the Joliet J-Hawks' first round match against the Anaconda Copperheads in the Class B State Volleyball Tournament at Montana State University's Brick Breeden Fieldhouse in Bozeman on Thursday, November 14, 2019.

BOZEMAN — Is the eighth time a charm? Joliet will find out soon enough, but first there’s a matter of discussing Thursday’s second-round win over Townsend, particularly the second set.

“Oh, my goodness, that was crazy,” said Joliet senior setter Shayla Webber. “That was by far one of the craziest sets I’ve ever played.”

Joelle Luoma, who led Joliet with 15 kills and 22 digs, had a simple explanation how the J-Hawks survived that set: “You just kind of have to be oblivious.”

The J-Hawks aren’t oblivious about their next opponent. Joliet will take on Huntley Project in Friday’s undefeated semifinal, the eighth meeting of the season between the J-Hawks and the two-time defending champion Red Devils. Project has won all seven of the previous meetings, but Joliet is the only team to take a set from the Red Devils, something the J-Hawks have done twice.

So, they’ve got that going for them.

“We just have to go and play our hearts out,” Webber said. “Do the best we can. We know what we need to do. We’re hoping to take that momentum into the game tomorrow. Get some rest and give it our best shot.”

Bushman and Skyler Wright added eight kills for Joliet. Webber finished with 30 assists and 18 digs and Wright also had 18 digs.

There aren’t many coaches who prefer to script things to the minutest detail, or are more superstitious, than Huntley Project volleyball coach Iona Stookey.

So when Stookey and the Red Devils learned they’d be playing Shelby and not Florence-Carlton in the tournament’s second round, that bit of news had the potential to upset the apple cart a bit.

But a program doesn’t win 97 matches in a row — 98 now — by giving in to surprises. So the Red Devils went out and did what they do, topping Shelby 25-15, 25-13, 25-16 at Brick Breeden Fieldhouse to advance to the undefeated semifinal on Friday.

Shelby, the third seed from the Northern B, reached the second round by beating Florence-Carlton, the Western B’s top seed and last year’s state runner-up, in five sets earlier in the day.

Stookey and the Reds Devils know Florence-Carlton well. Shelby, on the other hand, was a bit of an unknown, so Stookey just wanted her kids to be aware.

“When Shelby won that fifth set, they had all that energy and that’s what I told our kids in the locker room,” Stookey said. “ ‘Look, they have a lot of energy right now. ‘

“It’s a crazy game and they’re high school girls. So anything can happen.”

The Red Devils, who have won the last two Class B championships, matched the Coyotes’ energy and then some from the start. Project had 50 kills in the three sets, led by Emily Poole’s 16, Alana Graves’ 15 and Josie Hasler’s 11.

Hasler also had 14 digs, and Poole was in double figures, as well, with 14. Addy Hultgren had 42 assists.

“We came excited, we came to play,” Graves said. “We know there’s good teams to be at the state tournament and they have to be good to be here so we just came fired up and ready to go.”

The J-Hawks avoided a repeat of that performance with a 25-18, 25-23, 25-16 first-round win over Anaconda. Joliet bowed on the second day last season with losses to Florence-Carlton and Choteau.

“Our mindset has been we get a mulligan,” Joliet coach Colette Webber said, referencing last season. “We’re blessed to be here. We just want to do better. We just want to end better. So, we’re just taking one game at time.”

Joliet’s eight losses entering state is a bit deceiving. Seven of those have been to two-time Class B champ Huntley Project, and the J-Hawks are the only team to have taken a set from Project this season.

“We just want to leave here with a better feeling of pride that we played our best,” Webber said.

Makenna Bushman had 14 kills and three aces for the J-Hawks. Shayla Webber added 23 assists and 12 digs.

A series of injuries have prevented the Townsend Bulldogs from settling into any sort of regular rotations.

Up until before the 5B district tournament, coach Megan Bleile has had to use a mix-and-match formula to get by. But a return to health has the Bulldogs feeling much better, especially after a 25-22, 26-24, 10-25, 25-13 win over Choteau in the first round.

The injuries haven’t forced a down year, though. Townsend entered the state tournament 16-5, and the No. 3 seed from the South. But Bleile saw the first-round win as a hopeful sign that her team is rounding into form.

“Two weeks before districts we had our starting rotation back and we’ve just been getting stronger and stronger,” said Bleile, who brought Townsend to state for the first time since 2012 in her first season as head coach. “They’ve really figured out how to play together as a team and that’s been huge.”

It’s not often a volleyball team at the state tournament gets to play the previous year’s state champion and the state runner-up in the same day.

“I told them what an honor,” Shelby coach Jessica Brusven said. “Just go out and play. Play with some excitement, be proud and have some confidence.”

The Coyotes seemed to play with confidence against Florence. The teams have seen each other in previous in-season tournaments, but not in a full match. Shelby, the third seed from the North, had plenty of chances to give in to Florence, No. 1 seed from the West, but found ways to fight off the Falcons.

It was the 97th consecutive match win for Project, which hasn’t lost since dropping the 2016 championship match to Red Lodge. The Red Devils advanced to play later in the day.

For Glasgow, Thursday marked its first state appearance since 2009, and Hoerster said her team never really settled into the new environment. The Scotties will begin loser-out play Friday at 10 a.m.

“We talk all the time about having a short memory,” Hoerster said. “Really, let’s come and study the opponents now and come back tomorrow like it’s a whole new day. That’s all you can do. There’s a reason why you play five games and there’s a reason it’s double elimination.”

This gallery will be updated throughout the day.

Roundup from the first day of the 2019 state volleyball tournament from Bozeman.