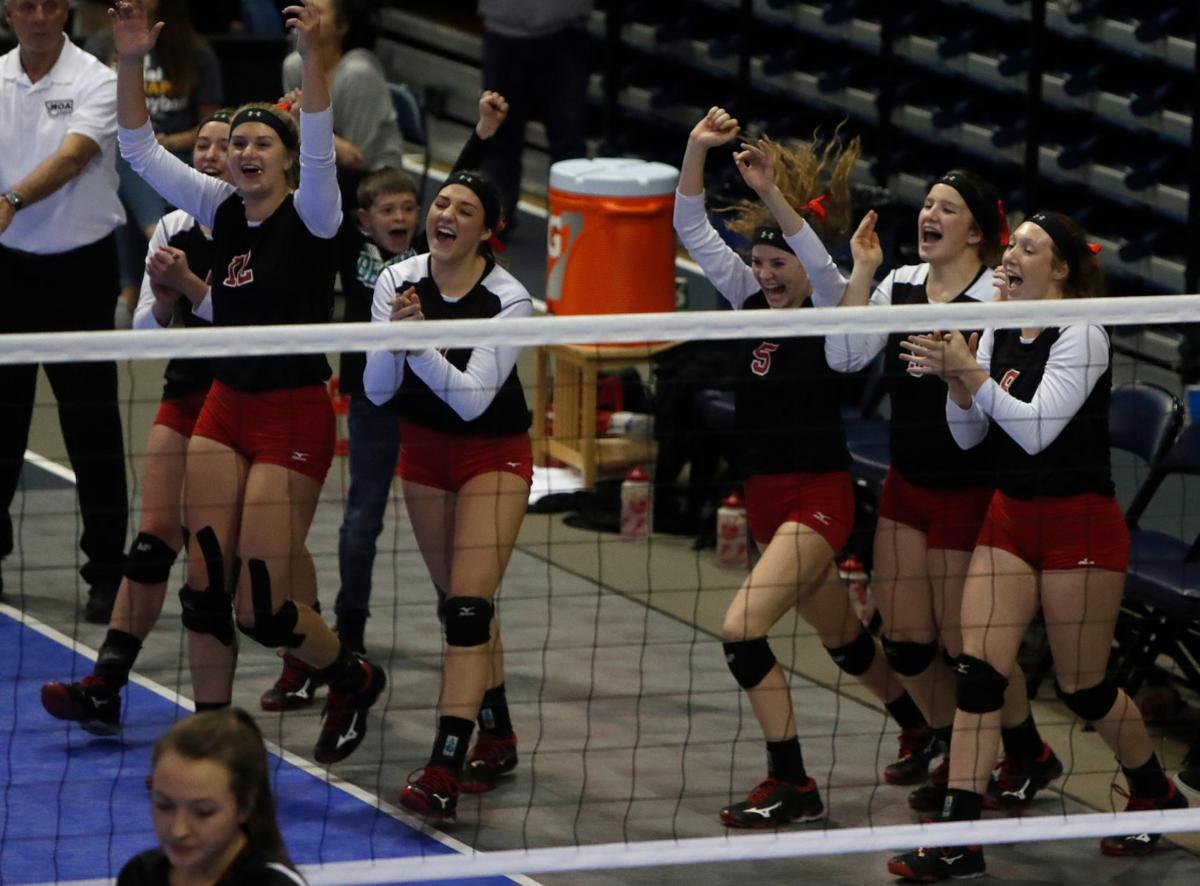 Huntley Project reacts as they head to the championship game in the state volleyball tournament at Brick Breeden Fieldhouse at Montana State University in Bozeman on Friday. 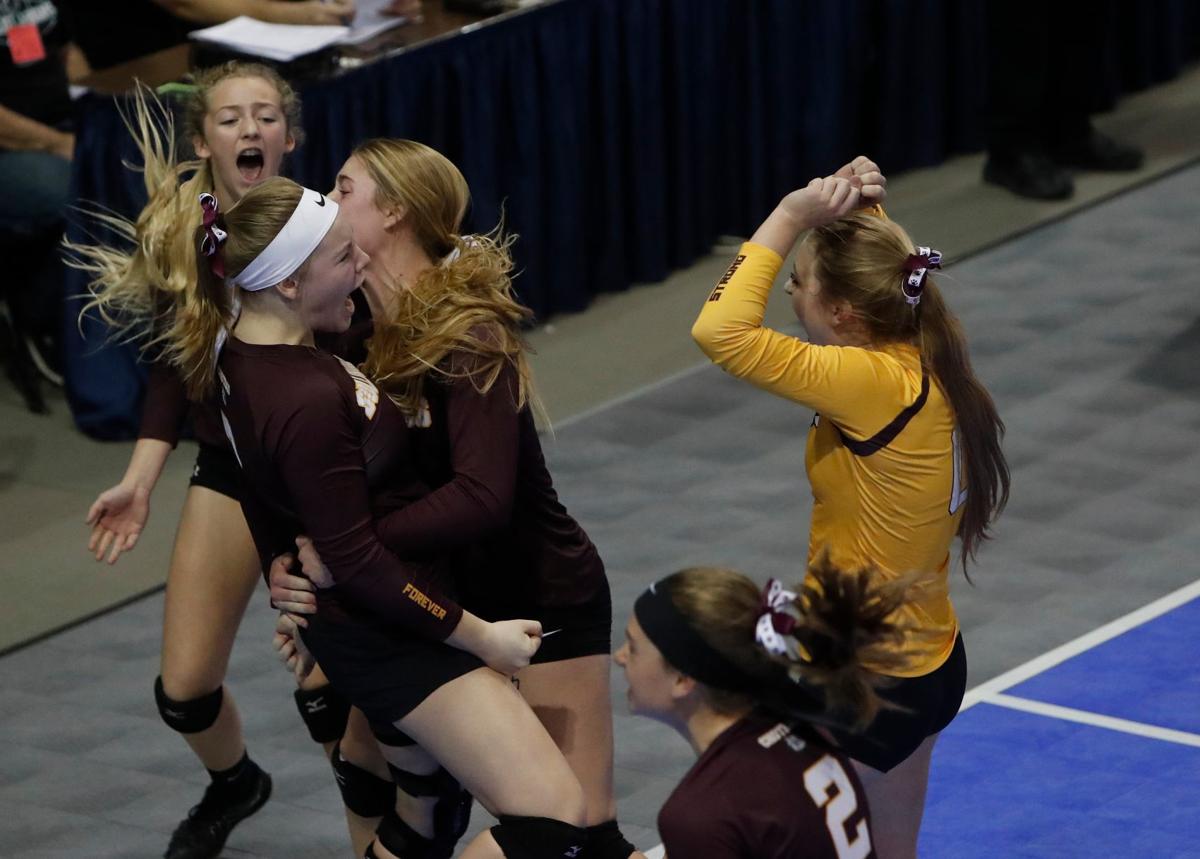 Choteau reacts after a point during the second day of the state Class B volleyball tournament at Brick Breeden Fieldhouse in Bozeman on Friday.

Huntley Project reacts as they head to the championship game in the state volleyball tournament at Brick Breeden Fieldhouse at Montana State University in Bozeman on Friday.

Choteau reacts after a point during the second day of the state Class B volleyball tournament at Brick Breeden Fieldhouse in Bozeman on Friday.

BOZEMAN – Of all the Huntley Project players happy to be playing for another Class B state championship, none might be happier than Josie Peterson.

And for good reason.

A year ago, Peterson was a spectator. This time, she is a participant.

“And enjoying every single moment,” he senior said.

There was plenty to enjoy Friday night as the relentless Red Devils breezed past Florence 25-9, 25-14, 25-13 in 59 minutes in the unbeaten semifinal match at the Class B state volleyball tournament.

Huntley Project, which has won 66 matches in a row, will play for its 11th state championship at 1 p.m. Saturday. It is the 15th title match for the Red Devils and 10th year in a row of playing for the crown.

Florence falls into the third-place match at 11 a.m.

Peterson could only watch her teammates last season after suffering a major knee injury the first day of practice, tearing her ACL, MCL and meniscus while going up for a hit.

“I didn’t really cry. I tried to stay positive about it.”

Peterson had surgery on her left knee Sept. 6 and could only watch as the Red Devils finished 33-0 with their 10th state championship. She also had surgery on her right knee in February to fix an injury suffered her sophomore track and field season.

“Not being able to play was heartbreaking,” she said. “To not be on the court … it’s hard to sit and watch.”

She returned to the court when the Red Devils opened practice in August.

“I was so scared,” Peterson said. “My teammates can tell you I was so nervous.”

Peterson was part of hustling Huntley Project defense and had a couple of key kills.

Sarah Hopcroft had nine kills and nine digs for the Falcons.

“My freshman and sophomore year, I was at state,” Peterson said. “But now to be in one and to play in one is amazing.

“This means everything to me.”

Roundup will be singing Saturday.

“We sing it 20 to 30 minutes before every match,” junior Chloe Cota explained.

So impressed were the Corvallis cheerleaders, they joined the Panthers singing it Friday.

It was the second time in two days that the Panthers defeated the Bulldogs. The two teams opened the tournament Thursday.

The win guarantees the Panthers a state tournament trophy for the first time since 2004. Roundup will play Florence in the 11 a.m. third-place match with the winner advancing to face Huntley Project for the state title.

The win also guarantees the Southern B producing two of the top three teams in the state.

“We talked well and moved our feet the best we have the whole weekend,” Cota said of Roundup’s play.

Nicole Krone had 15 kills and 17 digs for Choteau. Katie Bieler had 25 assists.

Highlighted by Christine Funk’s back-to-the-net one-handed save in the third set, Choteau swept Joliet 26-24, 25-20, 25-18 to advance to the meeting with Roundup.

With her team trailing, Funk sprinted past the baseline and underhanded the ball back over to the Joliet side for a momentum-changing point. She finished with a match-high 25 sets.

Anna Johnson had 11 kills for the Bulldogs and Nicole Krone had 10. Katie Bieler had 29 assists. Jessie Henderson had a match-high four aces.

The J-Hawks, who have no seniors, were led by Shayla Webber’s 15 assists and 17 digs. Skylar Wright added nine kills and 17 digs and Makenna Bushman had 19 digs.

The Panthers advanced to the late Friday night fourth-place match, taking on Choteau.

Roundup is guaranteed its best finish at the state tournament since 2004 when it placed third.

The Wolves lost senior Abby Juve to an ankle injury in the third set. The senior had to be helped off the court. After receiving treatment, she returned to the Wolf Point bench but did not play again.

Imani Bighorn had 21 kills and 11 blocks for the Wolves. Tori Nygard had 35 assists and Semarah Wells 16 digs. Paisley Ferdina had four aces.

It was the sixth meeting of the season between the two programs.

Kenna Pitcher and Emily Clotfelter each had 16 digs for the Eagles. Pitcher also had four kills.

Roundup from the second day of the 2018 state volleyball tournament from Bozeman.

Where Are They Now: Missoula Hellgate grad Tres Tinkle overcomes injuries, doubts to turn in historic career at Oregon State