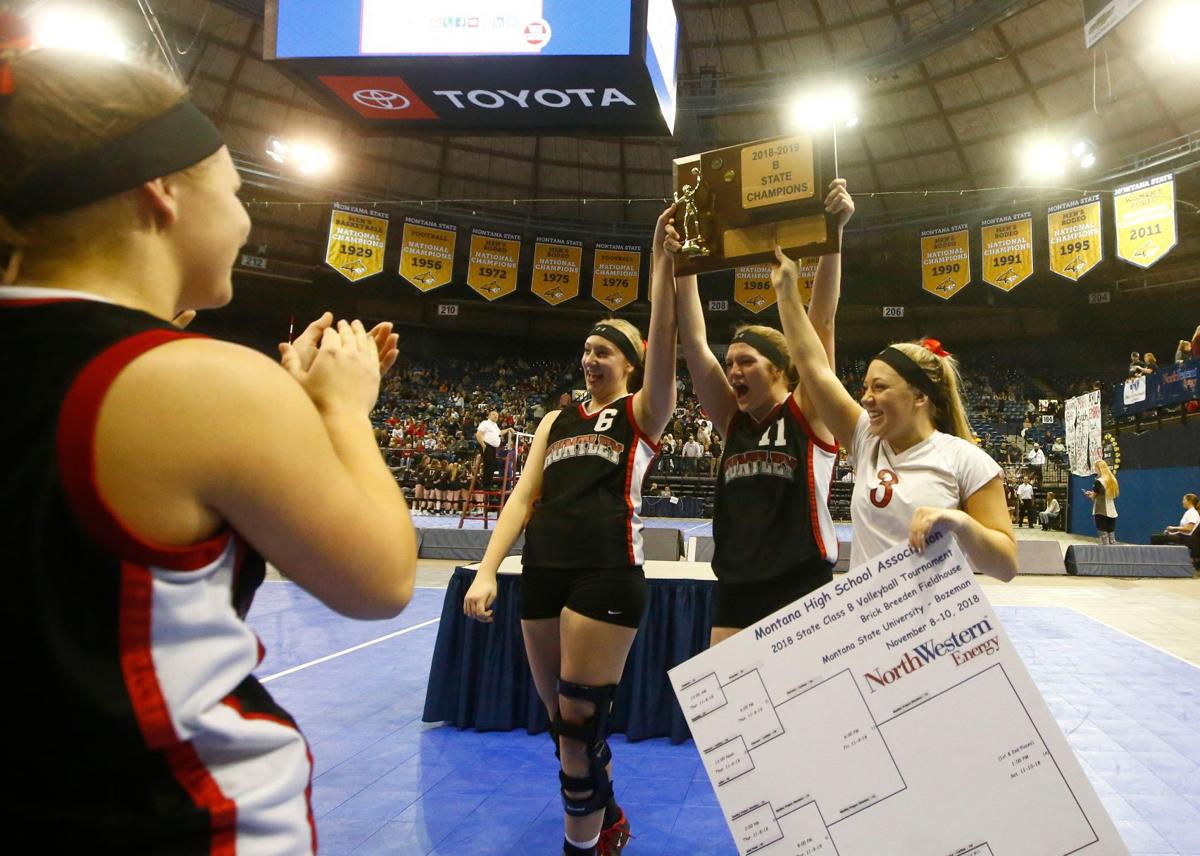 Huntley Project celebrates winning the championship match at the State B volleyball tournament at Brick Breeden Fieldhouse at Montana State University in Bozeman on Saturday. 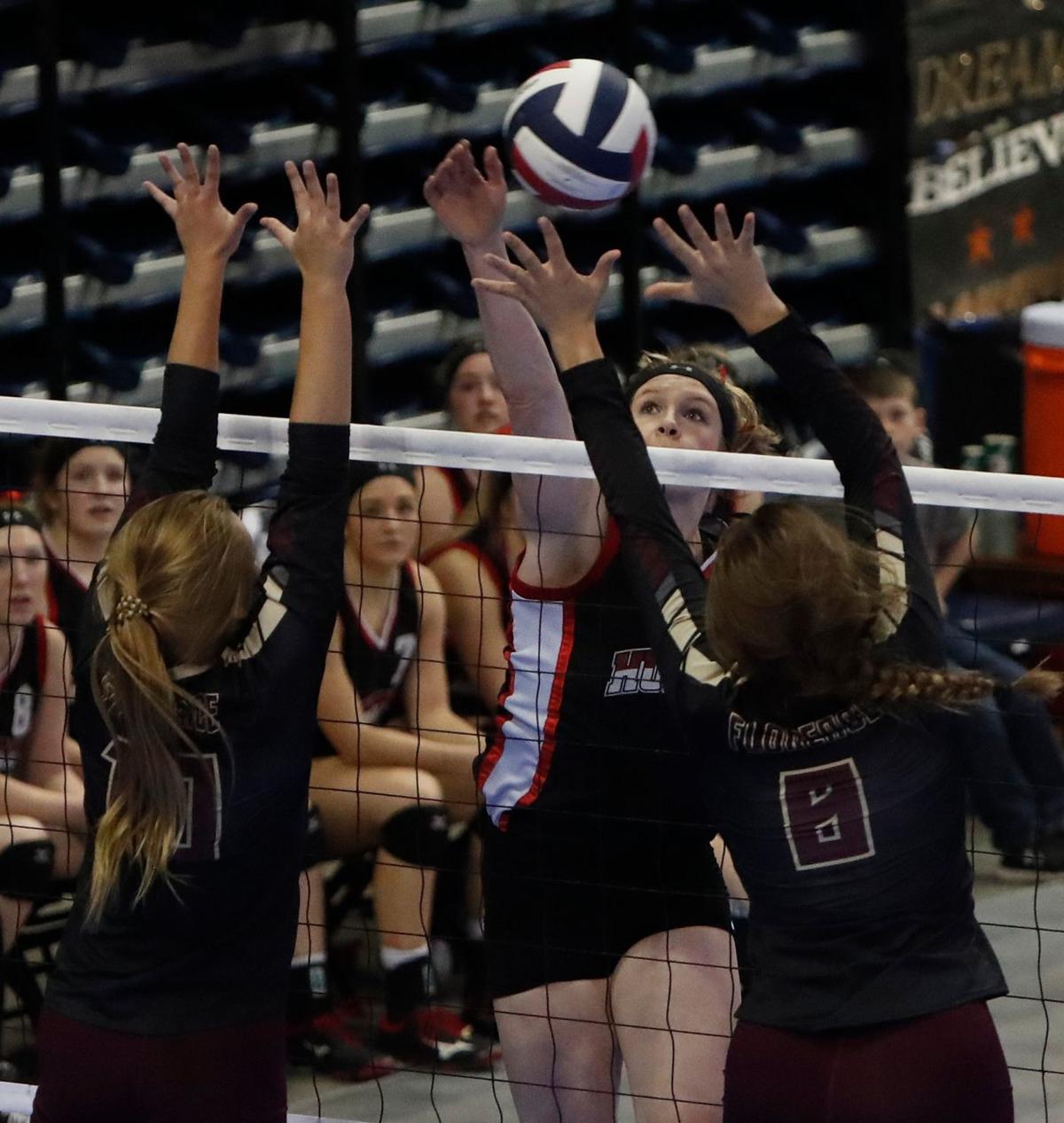 Huntley Project's Mollee Krum (11) spikes the ball as Florence's Rilee Mangun (8) blocks in the championship match at the Sate B volleyball tournament at Brick Breeden Fieldhouse at Montana State University in Bozeman on Saturday.

Huntley Project celebrates winning the championship match at the State B volleyball tournament at Brick Breeden Fieldhouse at Montana State University in Bozeman on Saturday.

Huntley Project's Mollee Krum (11) spikes the ball as Florence's Rilee Mangun (8) blocks in the championship match at the Sate B volleyball tournament at Brick Breeden Fieldhouse at Montana State University in Bozeman on Saturday.

BOZEMAN — Huntley Project is back in black.

After a one-year absence, the Red Devils brought back their black sleeveless uniforms for the Class B state championship match.

Huntley Project could have worn coveralls with the same results.

With a hustling defense and assertive offense, the Red Devils needed just an hour to sweep Florence 25-18, 25-11, 25-18 at Brick Breeden Fieldhouse for the 11th state title in program history and seventh in the past 10 years.

It was a rematch of the 2017 state championship match. The Falcons advanced with a win over Roundup in the third-place match.

After three consecutive second-place finishes, members of the 2017 team convinced Stookey they should change uniform colors for the title match.

“I agreed but told them if we lost, we were changing back,” Stookey said.

Spearheaded by senior Mollee Krum, “We want to go back to our traditions,” she said, the black uniforms returned Saturday.

“We wear them for all tournament championships, state and regular season,” setter Addy Hultgren explained. “It does help a lot.”

Huntley Project ran its win streak to 67 consecutive matches with its second straight unbeaten season (34-0). The 11 titles are only second to Billings Senior’s 12 for all classes. The Red Devils were playing in their 10th straight state championship match.

The Red Devils only dropped one set, the first against Wolf Point in the first round Thursday. Huntley Project lost only two sets all the season, the other in a 3-1 win over Class A state runner-up Belgrade during the regular season.

Distributing the ball across the front line, Hultgren finished with 44 of the Red Devils’ 46 assists. Krum and Emily Poole each had 14 kills, and Alana Graves had 13.

“As the setter, you’ve got to move the ball around and talk a lot,” Hultgren said. “Coach tells me to get the ball to whoever is hitting it hard.”

Tracking down everything, the Red Devils’ defense never allowed the Falcons to find an offensive rhythm.

“Our defense won the match for us,” Stookey said. “Maggie (Taylor) had a great state tournament. She made some plays that you don’t see many liberos make.”

Taylor had a team-high 16 digs for the state champions, while Poole added 13 and Sara Sumner had six.

“They have a great defense,” Florence coach Christy Duchien said. “It’s hard to put balls down against them.”

For the Falcons, Sarah Hopcroft had nine kills and 11 digs. Halle Christopherson had all 26 assists.

“I’ve been with this group since kindergarten,” said Stookey, who is a grade school physical education teacher at Huntley Project. “They are very coachable. They are just a great group of kids.”

Roundup head coach Alicia Godfrey had tears in her eyes as she held the third-place trophy tight.

The last time Godfrey held a third-place trophy, she was a senior player for the Panthers.

“This is about so many hours, so much sacrifice goes into this,” the sixth-year coach said about her team.

“Oh, a thousand things,” Godfrey said of what she liked about her team. “Their goal was to get here. When we got out of our district, I knew we would be fine. But if you would have asked if I thought we would be here (with a trophy) I would have told you no.”

Sarah Hopcroft had 18 kills and 19 digs for Florence.

Cota and Larson are juniors. Eiselein and Sealey are sophomores.