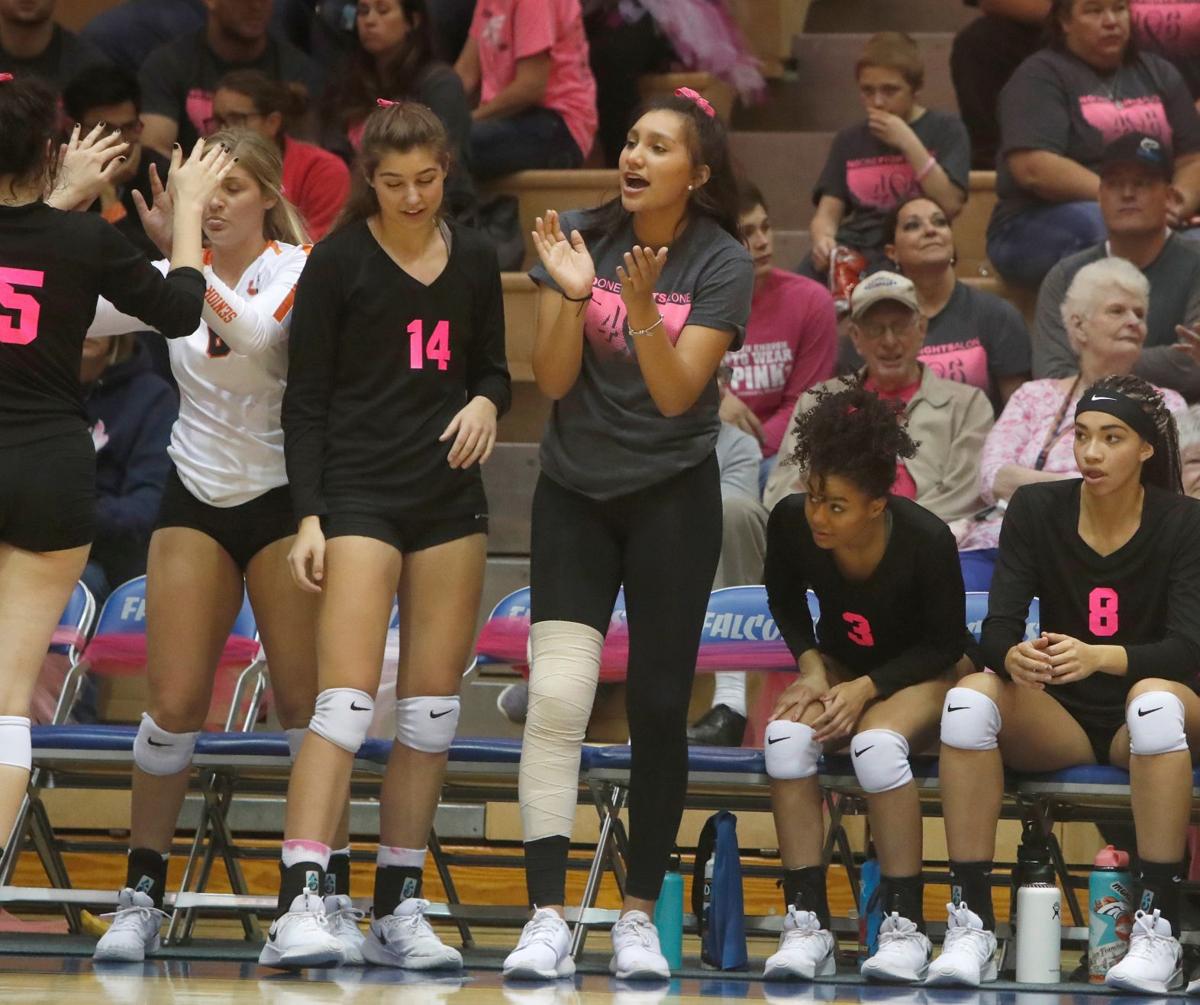 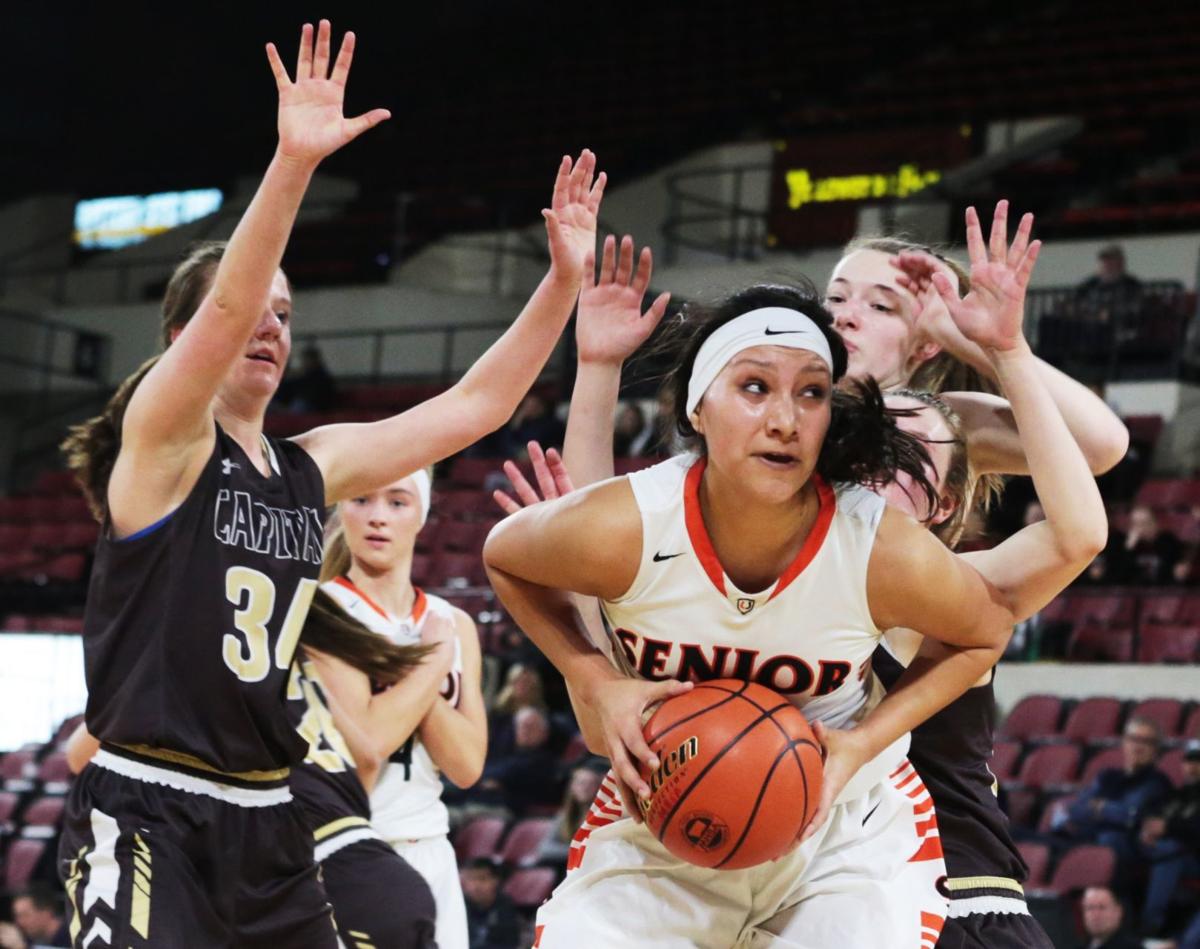 BILLINGS — Ever since Kola Bad Bear’s freshman year at Billings Senior, everyone knew the volleyball and basketball player would be something special.

Sure enough, by the end of her junior year, Bad Bear was all-state in both sports, and was poised to make her senior season her best. She was getting interest from several colleges, and she had her eye on playing basketball for Montana State.

When the 2018-19 season rolled around, Bad Bear envisioned leading the Broncs to the top of the Class AA volleyball ladder, snapping two years of runner-up finishes. She got off to a strong start (3.86 kills per set, a .425 hitting percentage and 5.14 points per set) and so did Senior, which indeed looked as if it could be a championship contender despite heavy graduation losses.

But in early October, Bad Bear went up for a kill during a match against Belgrade. Her shot was successful, but she landed awkwardly, and while her teammates celebrated the point, Bad Bear stayed on the floor.

Though she couldn’t get up, she didn’t think much about the injury. It wasn’t all that painful, and it was believed she’d hyper-extended her knee and would maybe miss a couple weeks.

Four days later Bad Bear learned she tore her ACL. All those hopes and dreams of a memorable senior season, helping the Broncs find volleyball and basketball greatness, were dashed.

Bad Bear still signed with MSU, and was chosen all-state again in volleyball despite playing just five weeks, so the injury didn't take away everything. And in the meantime, Bad Bear gained a little perspective.

Bad Bear talked with Mike Scherting of 406mtsports.com and the Billings Gazette about her injury and her recovery.

Not that you’re counting, right?

Yeah, not that I’m counting or anything. (Laughs).

No, it feels like two years. It’s been a long time. Feels like forever since I’ve been out.

What are you able to do now?

For someone who is used to doing things year ‘round, what’s that been like?

It was definitely different. The biggest thing was I had to accept the fact that I had to be patient. But it kind of helped. Schoolwork, I was able to not be so stressed about that. But I still went to every practice (for volleyball and basketball) and I sat and shot (baskets) when I couldn’t stand. I still shoot, I just can’t do much dribbling.

After the injury you still went to practices and would sit on the bench during games, cheering your volleyball and basketball teammates. It would have been easy to stay away.

I played with these girls for four years and they’re kind of like family. I couldn’t leave them just because I got injured. They’re still my team.

People I had talked with after the match didn’t think your injury was serious at that time.

We didn’t hear a pop or anything. I wasn’t crying. It didn’t hurt. But I knew I couldn’t get back up. They were celebrating because I got the kill and everyone was like, ‘get up.’ I was like ‘I can’t get up.’ I knew something was wrong because it kind of went numb. We thought it was one of those things where your knee swells so much you have to go get it drained and that I’d be out for like two weeks. We thought I hyperextended my knee. They did the ACL check and I didn’t know what they were doing and I was like, ‘can I go back out there now?’ and they were, ‘no.’ Then when they took my knee pads off my whole leg was swollen. But we didn’t think ACL tear at all. We were totally oblivious.

What was is like when you found out it was an ACL?

Oh, it was so devastating. At first I was in denial. He was showing me the MRI pictures and he was turning it and showing us where everything was supposed to be. He got to the ACL part and said, ‘do you see this white blob? Your ACL is supposed to be there and it’s gone.’ I was like, ‘Oh. Are you sure? I’m fine.’ Because I was like walking on it and everything. It was a very rough month for me.

For the longest time, I’m sure you had an idea of how your senior season was going to play out, right?

Oh, yeah. … I think I’m getting emotional … sorry if I cry. (She does start to cry). I had so many goals. I wanted that state championship, I was really tired of taking second and third the other years. Like senior year, I just wanted to go out on a bang and make it my year. I wanted to get the top conference seed, first place, because everyone was like, ‘oh, Senior’s going to suck because they lost nine seniors’. I just wanted to turn that around. And I wanted that Gatorade player of the year … I just had so many goals. That was the big part. It all just got taken from me and I wasn’t prepared for it to be my last volleyball game. I only played four conference games. I was so pissed.

Obviously, it’s still difficult. When did you come to grips with all that?

I didn’t really accept it or admit it out loud. I just felt like I was injured and would be back. State volleyball is when everyone was like, ‘what happened?’ ‘I tore my ACL.’ You know, I had to actually say it out loud. I think it hit me when basketball came and I couldn’t go to open gym or participate in anything. Then when my name wasn’t on the roster it was like, damn, I’m out.

Has MSU told you anything yet about redshirting or anything?

No. I don’t know if they’re expecting me to be back, but I’m expecting me to get back on the court and me doing what I was doing, even better. They haven’t talked to me about redshirting or anything.

Are you hoping to get to play right away or are you willing to redshirt?

I want to get out and play. I don’t think I would want to redshirt, but if that’s what it comes down to then I wouldn’t mind it. But as of right now I’m working to get out there and play.

When do you think you’ll get full clearance?

They told me July, which is like nine months, your typical time. But I leave (Billings) to move in the end of June and I think I should be cleared by then. I mean, I better be.

Does anything positive come out of an injury like this?

Oh, yeah. In the beginning you’re bitter and everything, like why did this happen to me? But now that I’ve opened my eyes, God does have a plan for you. You won’t see it in the beginning, but it becomes clear. It made me not just focus on being strong on that physical side, but on the mental side, too. It makes you have to actually work for something that’s out of your reach and you have to go get it. Not that I haven’t had to work hard before, but if I really want this I have to go get it and bust my ass off. You also learn who is really there for you and where your support systems are and having everyone have your back. You realize family and friends, how they’re important. And how you can’t take a sport for granted. Know that.

Down the road, how do you think you’ll feel about your senior year?

I definitely feel like it’s a blessing and a curse at the same time. (Laughs). I don’t want to dwell on it because it’s in the past, I can’t do much about it. You get the cards you’re dealt and you have to go from there. I feel like years from now if I look back on it … I guess we’ll find out what’s going to happen. I never used to be a sharpshooter but now that that’s all I really do. I’m really confident in my shot. So I guess that’s a plus. (Laughs).

'Just very, very proud': As Crow standout Naomi Bad Bear hobbles toward an end and a beginning, an extended family walks with her