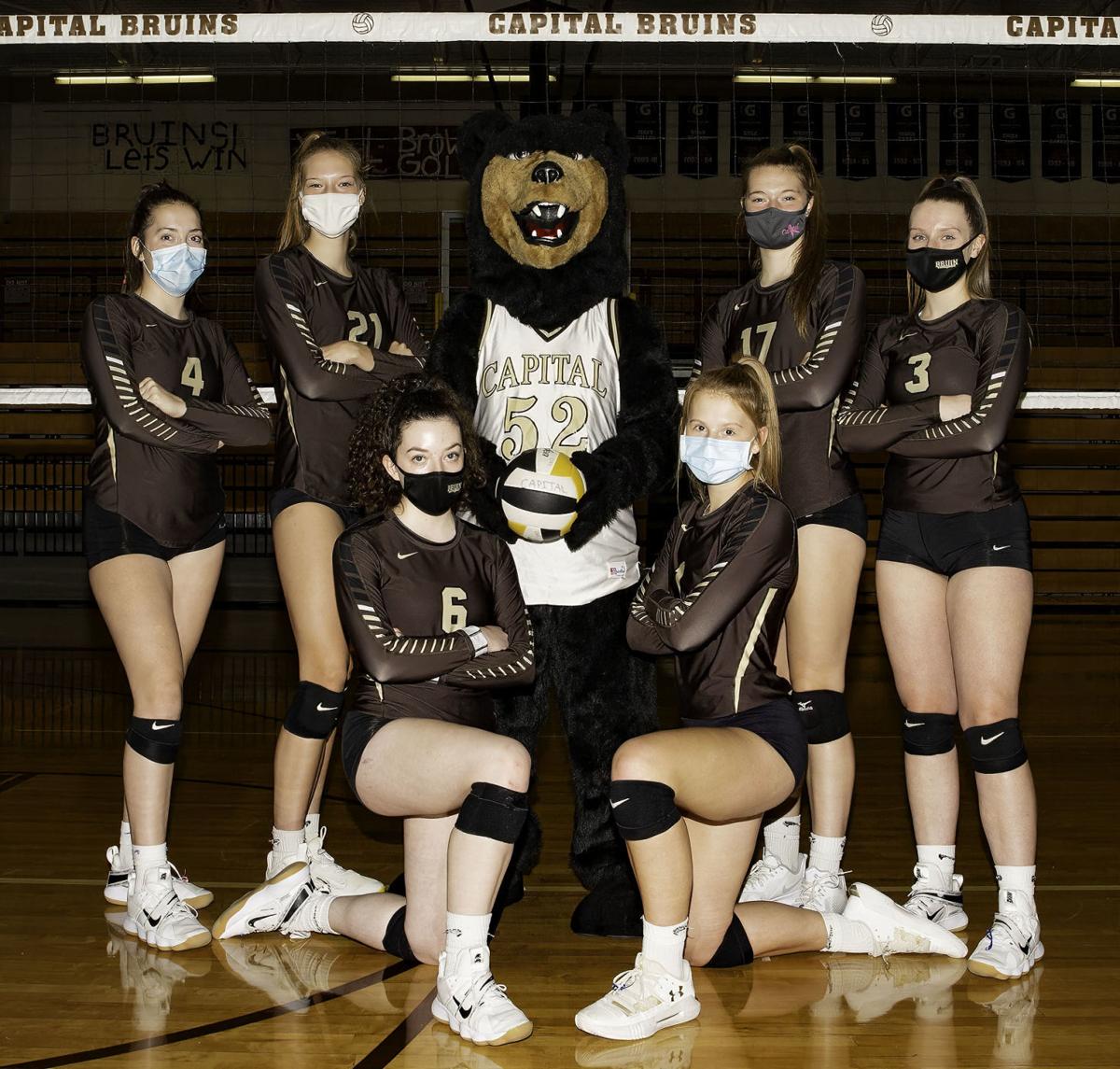 The Helena Capital senior volleyball players pose for a picture. They were honored Tuesday night as the Bruins rolled Sentinel on senior night 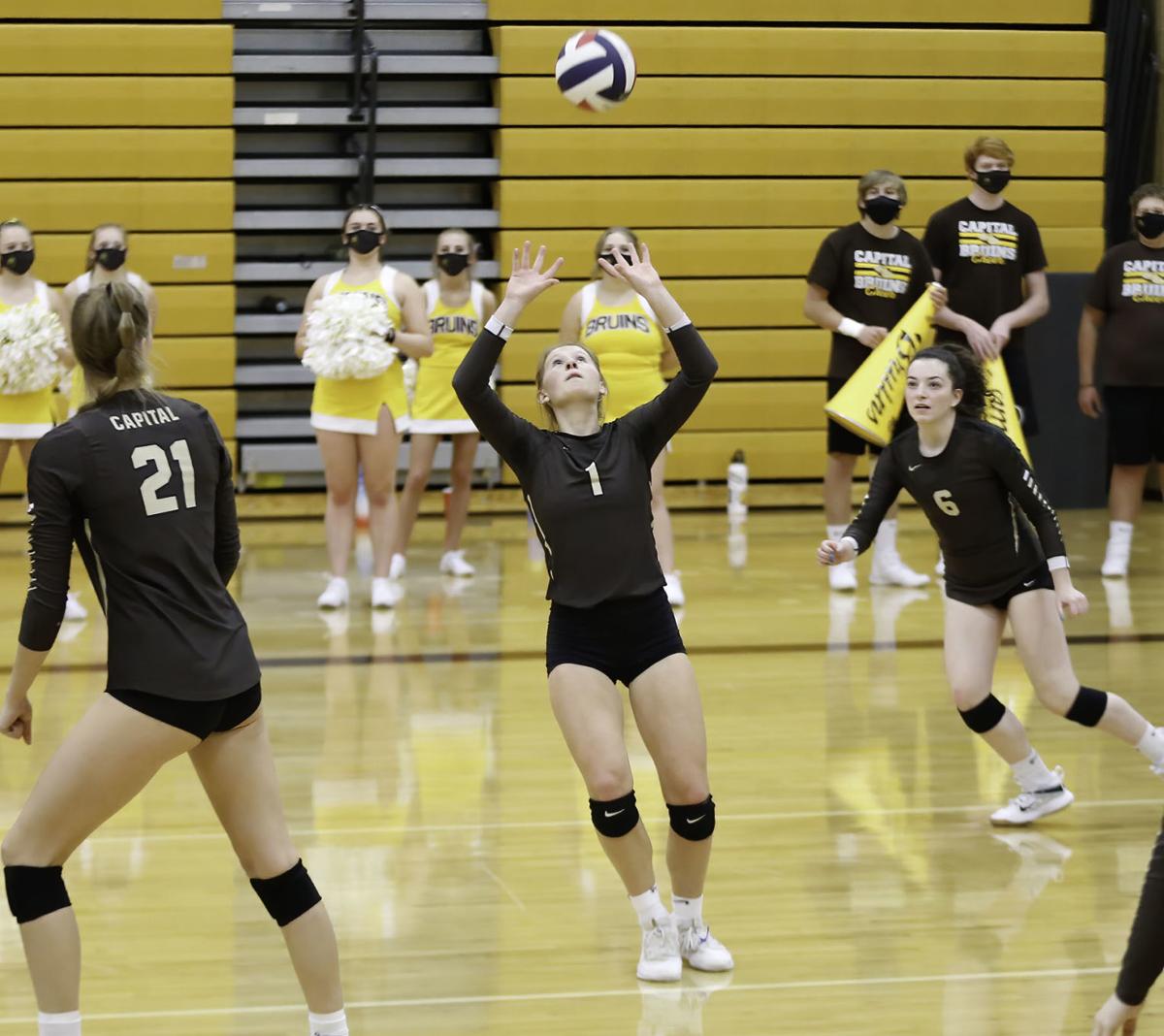 Audrey Hofer gets ready to set the ball Tuesday night at the Bears Den for teammate Paige Bartsch (21) for the Helena Capital in a 3-0 win over Missoula Sentinel.

The Helena Capital senior volleyball players pose for a picture. They were honored Tuesday night as the Bruins rolled Sentinel on senior night

Audrey Hofer gets ready to set the ball Tuesday night at the Bears Den for teammate Paige Bartsch (21) for the Helena Capital in a 3-0 win over Missoula Sentinel.

HELENA — Records are made to be broken. But for the Helena Capital volleyball team, breaking the consecutive win record in Class AA will require a little more time.

And one more win... as well as some paperwork.

You see, Helena Capital isn't the first Class AA volleyball team to win 66 consecutive matches, a number the Bruins reached with a 3-0 sweep over Missoula Sentinel Tuesday night at the Bears Den in Helena.

That's because Billings Senior, the school with that 65-win record, actually won 66 straight games, as verified by the Billings Gazette and 406mtsports.com, the Broncs won their first match of the 2010 season, giving them 66 wins, which is the unofficial record.

It's unofficial due to the fact that Senior never sent in the paperwork required to have it reflected in the MHSA record book.

"We depend on the schools to send us that information along with corroboration," MHSA executive director Mark Beckman said. "If Billings Senior says, 'Here is our paperwork,' that will be the record as long as we can verify it."

Beckman said that once the information is verified it's entered into the record book. But it's up to the schools to provide it, due to limited staff.

So, unofficially, Capital and Senior are tied for the Class AA record with 66 wins, a record the Bruins can break Saturday at Missoula Big Sky.

"We were more focused on it being senior night and celebrating our seniors," Capital head coach Rebecca Cleveland said of the record. "I didn't tell them (the players) until afterwards. I'm glad though that we found out. That will give us another fun thing to shoot for on Saturday."

As much as Capital has wanted the record, the Bruins are also eyeing the top seed in the Western AA for the state volleyball tournament, which would give them home-court advantage throughout the playoffs, including the state championship match.

"It's kind of a bummer that we won't be going to Montana State," Cleveland said. "Which is just a fun experience, but to say we had a pandemic volleyball season, one that we have been so grateful to play and to have a chance to potentially host throughout the state bracket is really cool."

After the Bruins honored their six seniors: Paige Bartsch, Dani Bartsch, Audrey Hofer, Noel Teders, Addy Meredith and Katie LaFave, Capital went to work in search of an 11-0 start, on top of its 66th straight win.

Paige Bartsch set the tone as Capital built a 17-8 lead in the first set, before Dani Bartsch wrapped up the win later with a kill. The Bruins won the second and third by double digits as Paige went off for a match-high 16 kills and 10 blocks, as well as two aces.

Dani Bartsch also pitched in with 11 kills and two aces. Audrey Hofer had a stellar senior night too thanks to 24 assists.

"We have had this senior lineup, little glimpses of it throughout the season," Cleveland said. "And to be able to just run that the majority of the match is awesome and they all did a terrific job. It was nice as a coach to tell them to stay out there and do their job."

For Dani Bartsch, senior night also led to some reflection.

"Looking back at freshman year it's crazy how fast time flies," she said. "How many hours and weekends I have spent here. I want to add it up at some point but this has definitely become my second home."

With a couple more wins, the Bruins will make sure it's their home for the postseason as they seek a third consecutive state championship and with a win Saturday, they will have unofficially won more consecutive volleyball matches than any team in Class AA history.

The Bruins tied Billings Senior with their 65th straight win Friday, which is a Class AA record they now share with the Broncs.