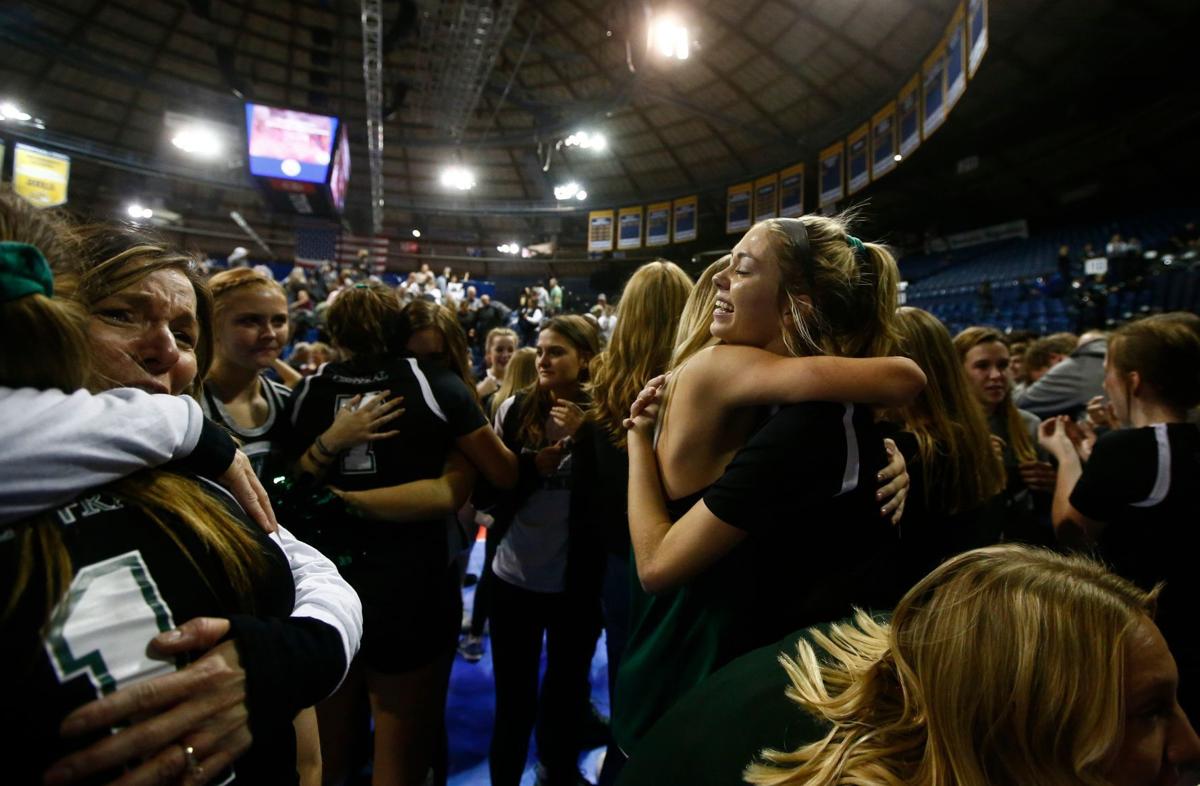 Billings Central celebrates after taking first in the Class A state volleyball tournament at Brick Breeden Fieldhouse at Montana State University in Bozeman on Saturday. 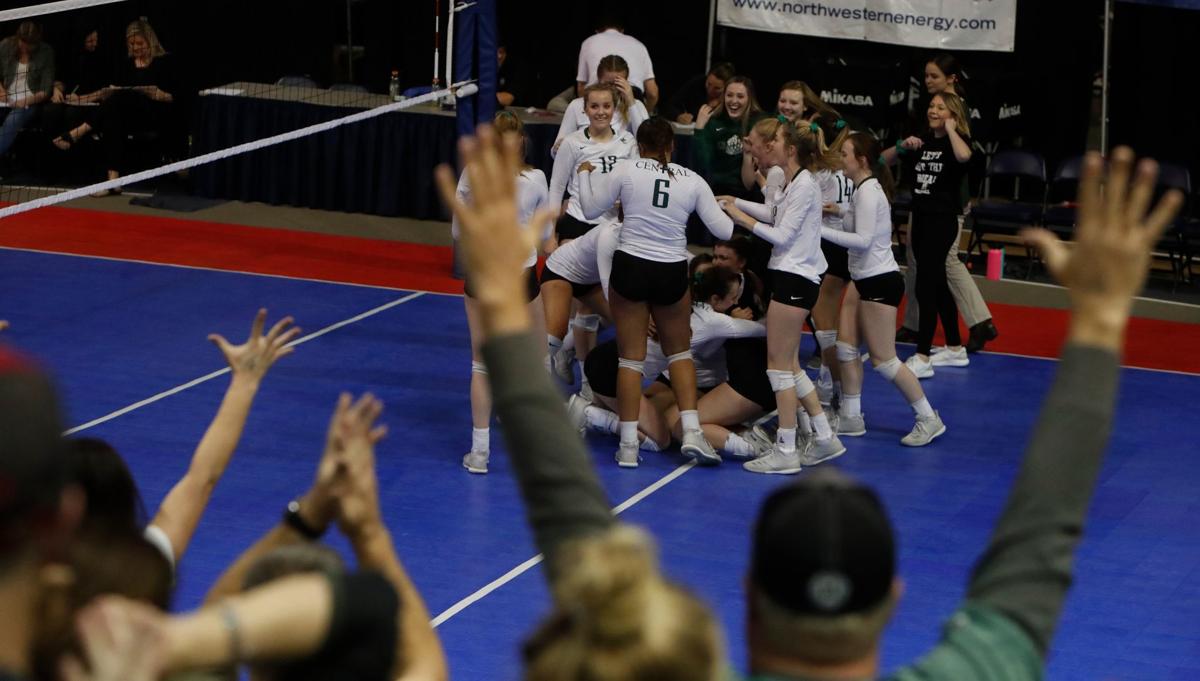 Billings Central reacts after the Rams swept Belgrade to reach the championship round in the Class A state volleyball tournament at Brick Breeden Fieldhouse at Montana State University in Bozeman on Friday. 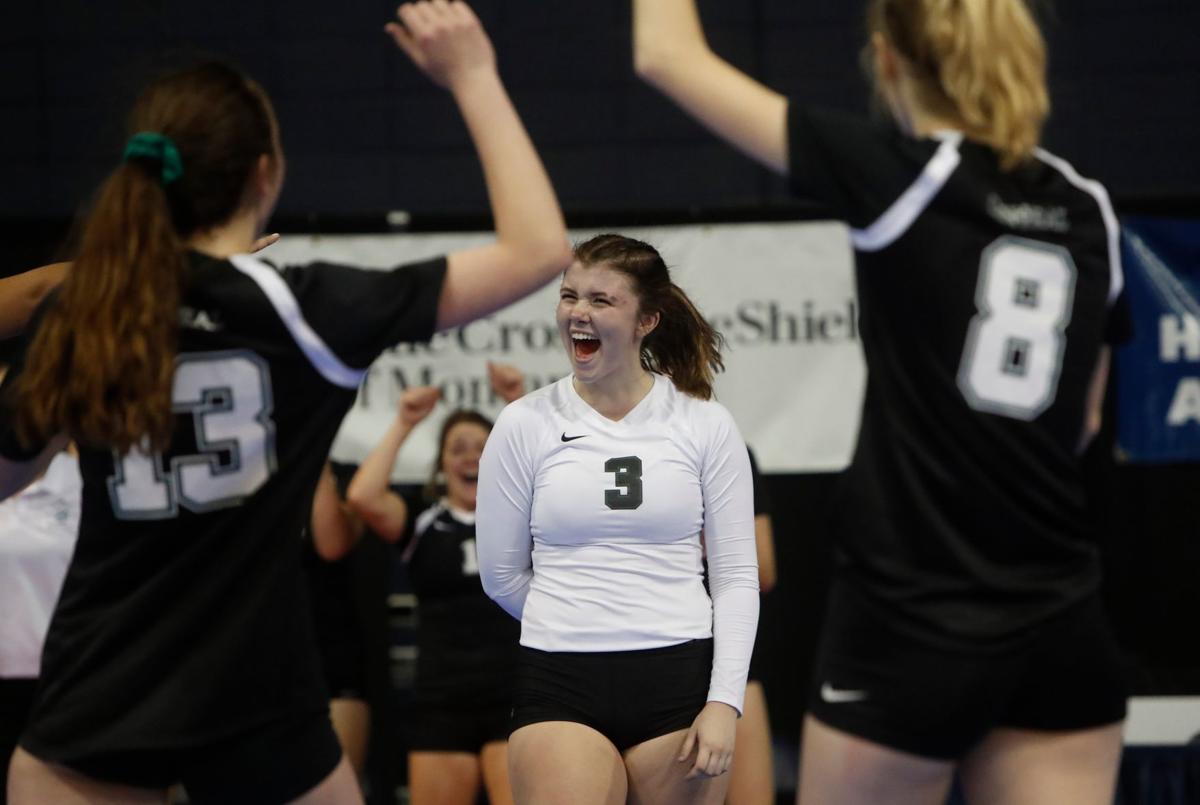 Billings Central's Avery Hadley reacts after a point in the second championship game at the State A volleyball tournament at Brick Breeden Fieldhouse at Montana State University in Bozeman on Saturday.

Billings Central celebrates after taking first in the Class A state volleyball tournament at Brick Breeden Fieldhouse at Montana State University in Bozeman on Saturday.

Billings Central reacts after the Rams swept Belgrade to reach the championship round in the Class A state volleyball tournament at Brick Breeden Fieldhouse at Montana State University in Bozeman on Friday.

Billings Central's Avery Hadley reacts after a point in the second championship game at the State A volleyball tournament at Brick Breeden Fieldhouse at Montana State University in Bozeman on Saturday.

BOZEMAN — It’d been a good 15 minutes or so since Cindy Gray, on her 16th birthday, put down the final point, and Avery Hadley’s eyes were still watering like someone had left the faucet running.

So true. How do you describe how the Rams retained their Class A volleyball championship on a day where two heavyweight programs, in a rivalry that’s been born and raised organically, not artificially, staggered each other continually, only to see the vanquished rise again?

The cheers from one side would rise when one of their players had a big hit, only to be quickly drowned by roars from the other side when it was realized the ball had not hit the floor, but rather had been dug up by diving player.

But when more than four hours of volleyball — six for Belgrade, which had to play in the morning third-place match to reach the final — were over at Brick Breeden Fieldhouse on Saturday, Billings Central was a 22-25, 29-27, 25-15, 25-19 winner over the Panthers in the “if necessary” championship match against Belgrade.

The “if necessary” was because the Panthers won the first match of the championship round, 20-25, 25-22, 25-21, 21-25, 15-8. Billings Central defeated Belgrade on Friday in the undefeated semifinals, meaning the Panthers would have to beat the Rams twice Saturday to take the title.

“It’s going to hurt. It’s going to hurt for a long time,” said Belgrade coach Jade Schmidt, whose team entered the state tournament 26-2 and 4-0 against the Rams. “But what I told the girls afterward is when they look back on this season and on this day, they’ll know that they put everything that they could have on the floor and they left it all out there. That will begin the healing process.”

Because of the two matches, players racked up the stats. For Billings Central, Olivia Moten-Schell had 39 total kills, Avery Hadley had 51 digs and Sierra Schuster 68 assists. Belgrade’s Bailey Christensen finished with 51 kills, Taylor Christensen had 55 digs, and Jaiden Blakely 89 assists.

It’s the second consecutive season Billings Central (25-6) has toppled Belgrade (28-4) for the title. Last year, the Rams were the likely favorites and they came through. This year, due to the Panthers’ solid regular season and their mastery of the defending champs, the tables were turned.

Billings Central coach Kylie Reitz had even coined a mantra acknowledging such. Something to the effect of play like underdogs, defend like champions. The Rams found a way to do that, first on Friday, and then again in the second championship match.

“I think we all believed it,” Central’s Moten-Schell said. “It was just a matter of we have to do it.”

Belgrade was trying to go out as champions in its final year in the Class A classification. Next season, the Panthers will move to Class AA, joining the Eastern Division where they’ll play regularly against the likes of Bozeman (2nd at the State AA tournament), Billings West (3rd at state) and Billings Senior, as well as all the other programs.

Over the past few seasons, the Billings Central-Belgrade matchups have become must-see. It’s a rivalry not of proximity nor of some perceived slight years ago, but rather two high-quality opponents bringing out each other’s best at the most important times.

The departing Panthers will leave a void.

“I mean, iron sharpens iron, right?” Reitz said. “They’re our best sharpener and I hope they can say the same about us. Obviously, they’re going to get great competition at the AA level so we’re going to miss having that team where you go play them and you go, ‘oh, crap, I’ve got to get better at this.’ I might joke around and go ‘good riddance, I’m glad that they’re gone.’ But I really am going to miss that team.”

After Friday’s emotional win over the Panthers — Hadley was crying then, too — Reitz had trouble sleeping. It wasn’t worry, or Xs and Os that kept her up. It was something else. She was thinking what this group of players meant to her.

“Win or lose, this would have gone down as one of my favorite teams to coach,” Reitz said. “Just the best kids, the hardest-working kids. It just made it such an enjoyable experience, and to get this (championship) with this group it’s just amazing.”

Corvallis finished third for the second season in a row, meaning the top three spots in the classification remained the same from last season.