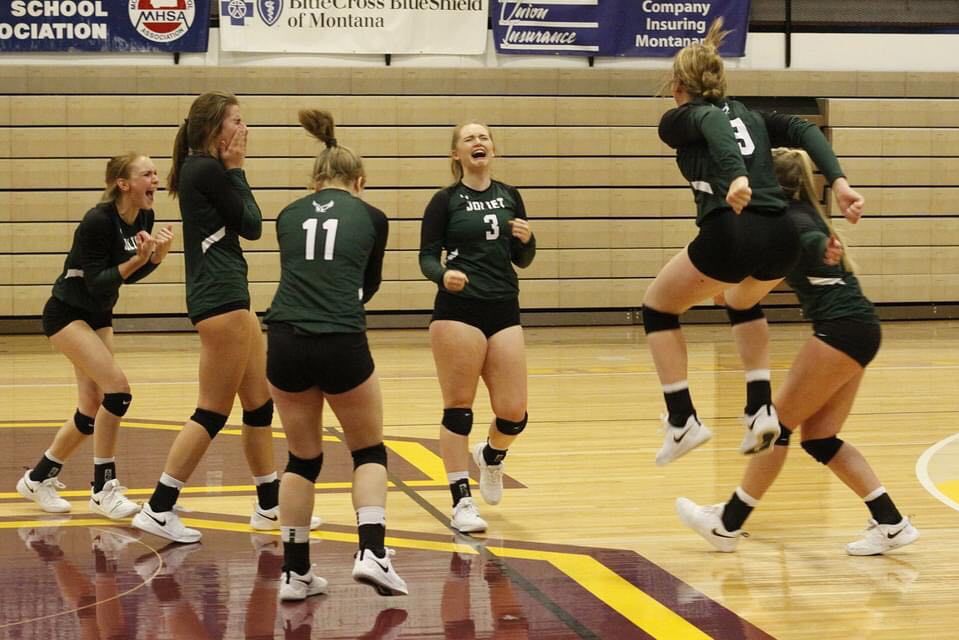 Joliet celebrates its first state volleyball title after sweeping Huntley Project on Saturday in the Class B tournament. 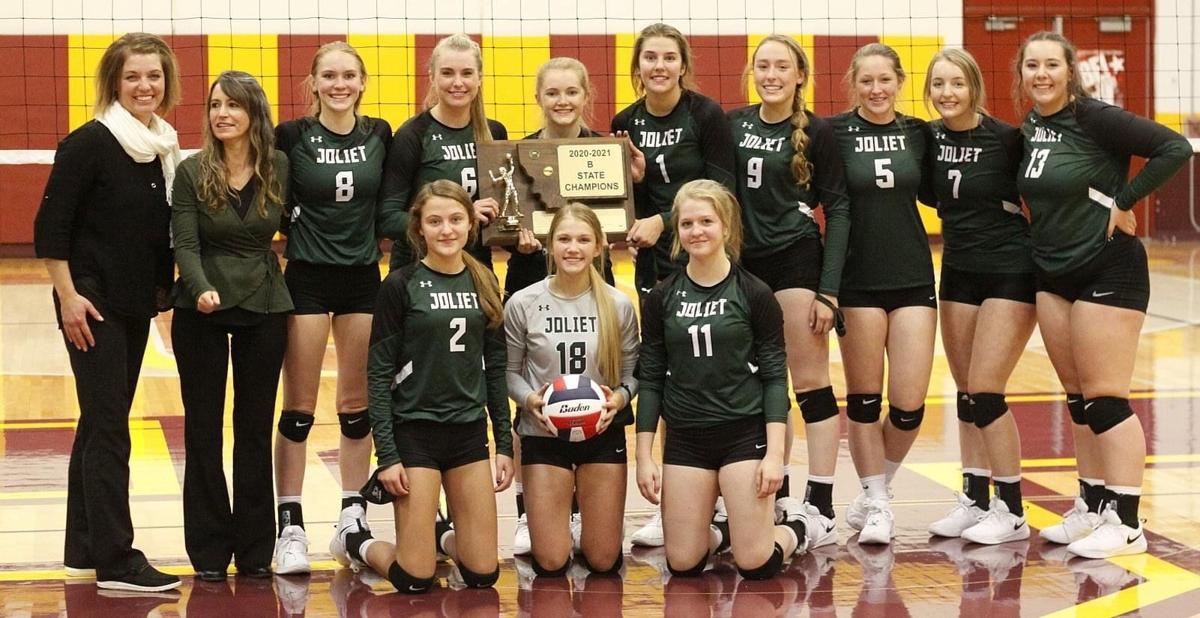 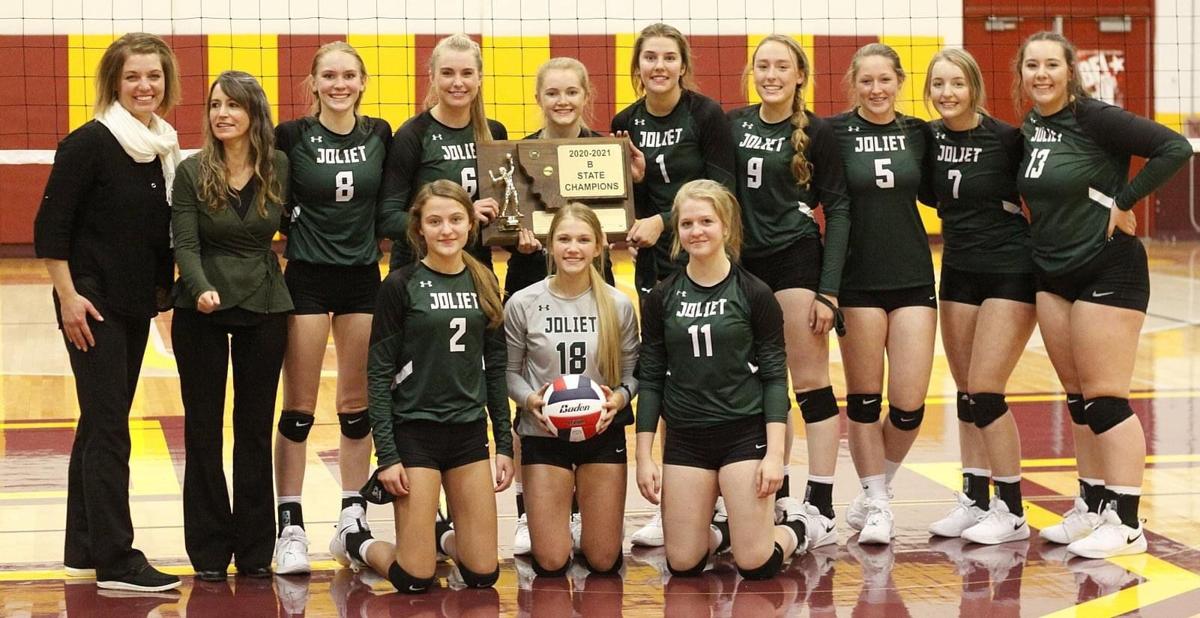 The Joliet J-Hawks swept Huntley Project in the Class B state volleyball championship to earn their first volleyball title in school history Nov. 14, 2020 in Shelby. 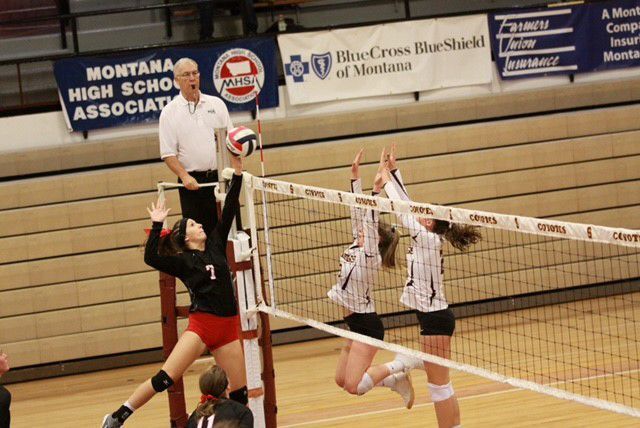 Huntley Project's Cearra Oblander goes up for a kill attempt against Choteau in a morning match. 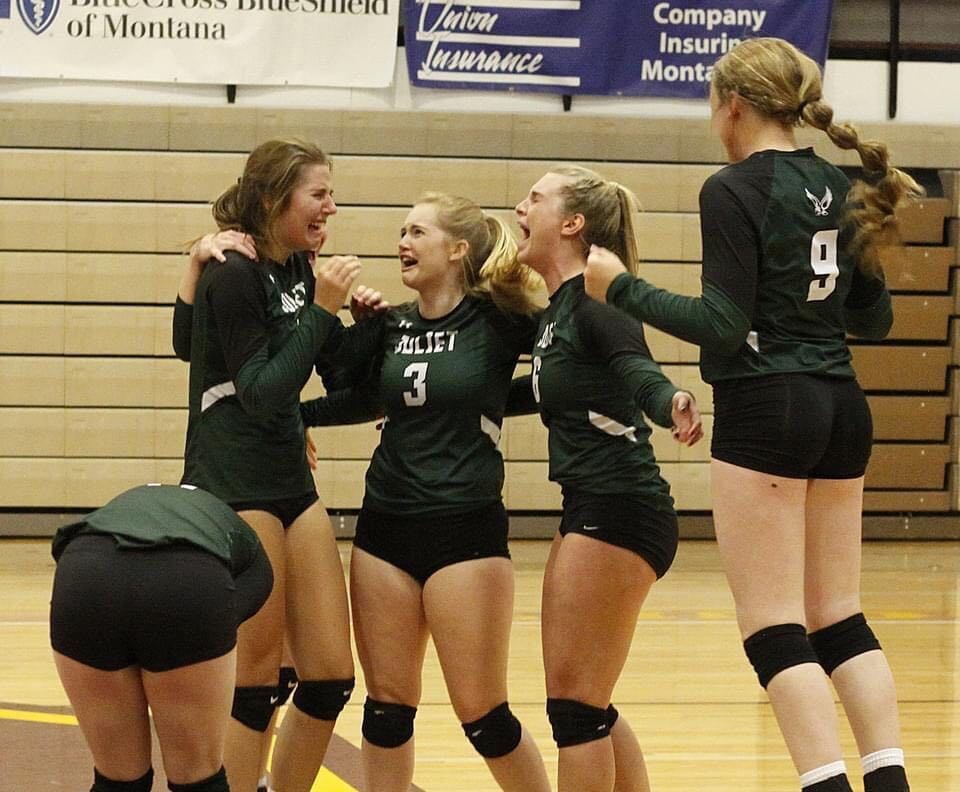 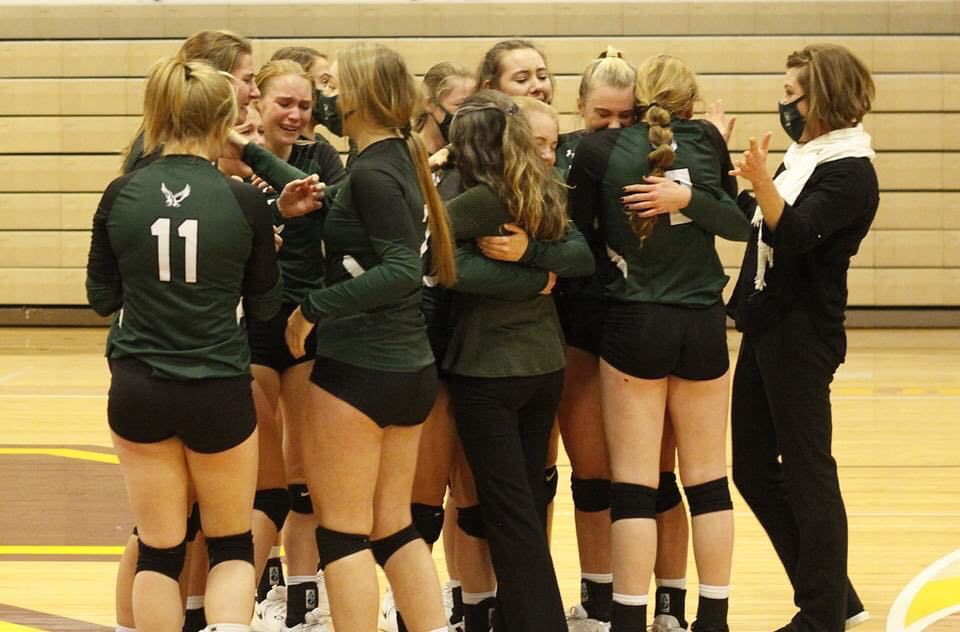 The J-Hawks share a few hugs and tears after toppling Huntley Project.

Joliet celebrates its first state volleyball title after sweeping Huntley Project on Saturday in the Class B tournament.

The Joliet J-Hawks swept Huntley Project in the Class B state volleyball championship to earn their first volleyball title in school history Nov. 14, 2020 in Shelby.

Huntley Project's Cearra Oblander goes up for a kill attempt against Choteau in a morning match.

The J-Hawks share a few hugs and tears after toppling Huntley Project.

SHELBY — Makenna Bushman put down the final point of the 2020 Class B volleyball season on a block and put her hands to her face.

As her Joliet teammates rushed to embrace the senior, there was very little of the usual jumping up and down in the celebration. No, this was just one, big, swarm of arms around shoulders.

“Oh, man, it was just so bittersweet,” Bushman told The Billings Gazette and 406mtsports.com by phone as the J-Hawks prepared to depart Shelby with the school’s first volleyball championship trophy in tow. “I remember thinking before I got that block that was my last high school volleyball moment. And so it was so bittersweet, and it was so emotional all at once.

“I almost didn’t even have the energy to jump up and down. I just had to kind of recollect all my emotions.”

Still, it wasn’t an easy takeaway. These teams met nine times this season; Joliet’s championship win was the tiebreaker.

It’s been a long time coming for the J-Hawks. They moved up from Class C to Class B 13 seasons ago, Colette Webber’s first as head coach, and they’ve reached the state tournament each of the past five years.

Joliet finished in third place in 2017, when Bushman and fellow seniors Skyler Wright and Merrin Schwend were freshmen starters. A two-and-out followed in 2018, but then came 2019 and second place.

You can add gold to the collection.

“It’s inevitable if you work hard, you keep improving and you keep building your program, hopefully, you’ll get to the point where you can beat some of the better teams,” said Webber, who added it took Joliet eight years before it even got out of district play after the move to Class B. “We’ve competed awesomely, but we’ve just never been able to get over the hurdle of getting a gold.

“It makes all the hard work worth it. I’m proud of the kids who commit to it.”

After a five-set, two-hour win over Choteau earlier in the day, the Red Devils made an appearance in the state title match for the 12th consecutive season.

The Red Devils were trying to become the first program to win four championships in a row since their own program won five straight, from 2009-13. But Project never led by more than one point at any time in Saturday’s match.

Still, the Red Devils have earned a state-tournament trophy every year since 2005. They finished the season with five losses, all to Joliet, and two of their wins were over Class A state champion Billings Central.

Bushman, who has signed to play for Rocky Mountain College, had 17 kills and 11 digs. Wright added nine kills and 17 digs, Schwend had 28 assists, and Kylynne Coombe contributed five kills, three blocks and six digs. ChelSea DuBeau had three of the J-Hawks’ seven aces.

This was the first season since 2003 that all four state tournaments weren’t held at Brick Breeden Fieldhouse on the campus of Montana State. The Montana High School Association separated the tournaments due to the coronavirus pandemic, and it’s just one more reason that this season will be memorable for the J-Hawks.

But among the perpetual cloud of a potential canceled season, of playing in front of limited fans, and dealing with new match rules and protocols to limit the spread of COVID-19, the biggest memory will be that trophy.

“It’s such a perfect way to end the season,” Bushman said. “I couldn’t ask for anything more for the season or for my team, I’m just so excited.

“Of course, I wouldn’t want it to end, but if we’re going to end I love for it to end this way.”

Macee Murphy had a triple-double for the Red Devils with 17 kills, 34 assists and 37 digs. Josie Hasler had a team-high 27 kills and 43 digs. Stats for Choteau weren't provided.

Choteau finished in third place. It's the first trophy for the Bulldogs since they placed third in 2011.

Coverage of the 2020 MHSA Class B volleyball tournament from Shelby.

Roundup from Week 12 of the high school sports season. Football playoffs continued and divisional volleyball tournaments were all over the state..