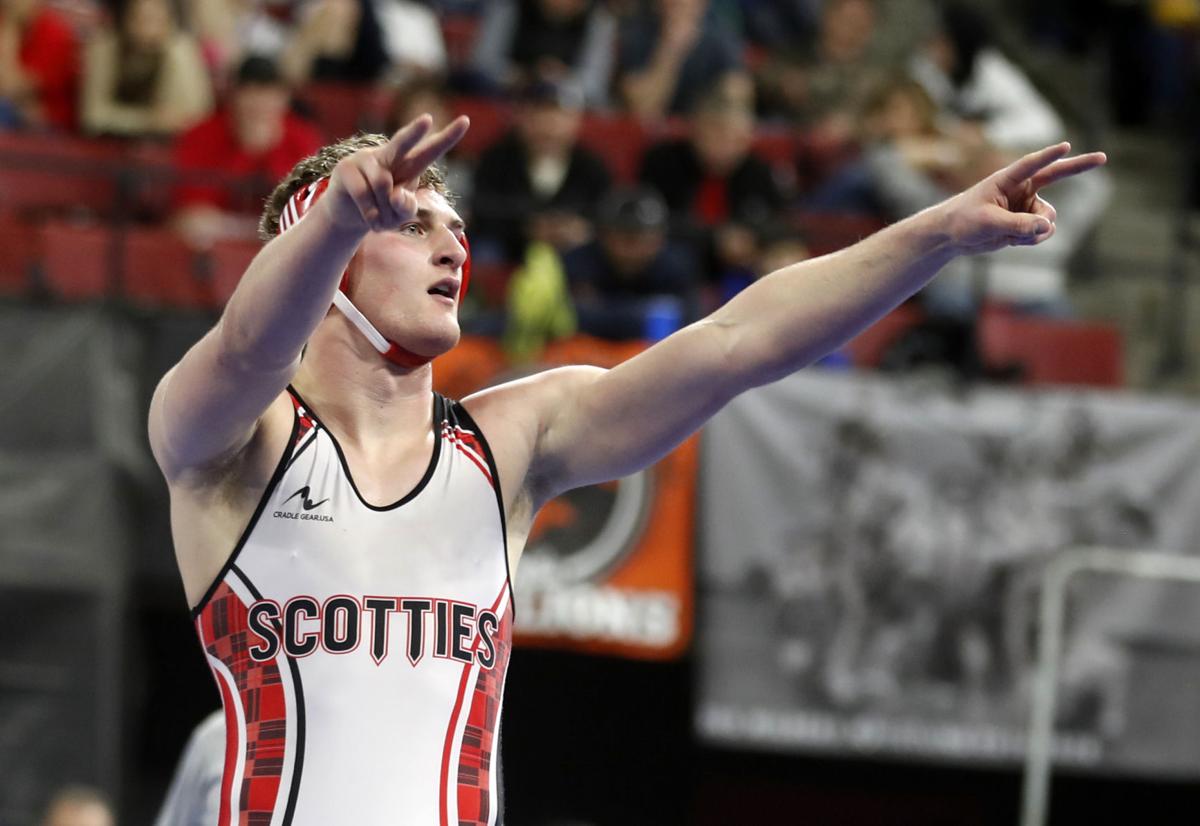 Dylan Nieskens of Glasgow, pictured celebrating his state championship victory last year, hopes to win a third state title this season for the Scotties. Glasgow, the defending champion, is one of the favorites in the team race as the State B-C wrestling tourney begins Friday in Shelby. 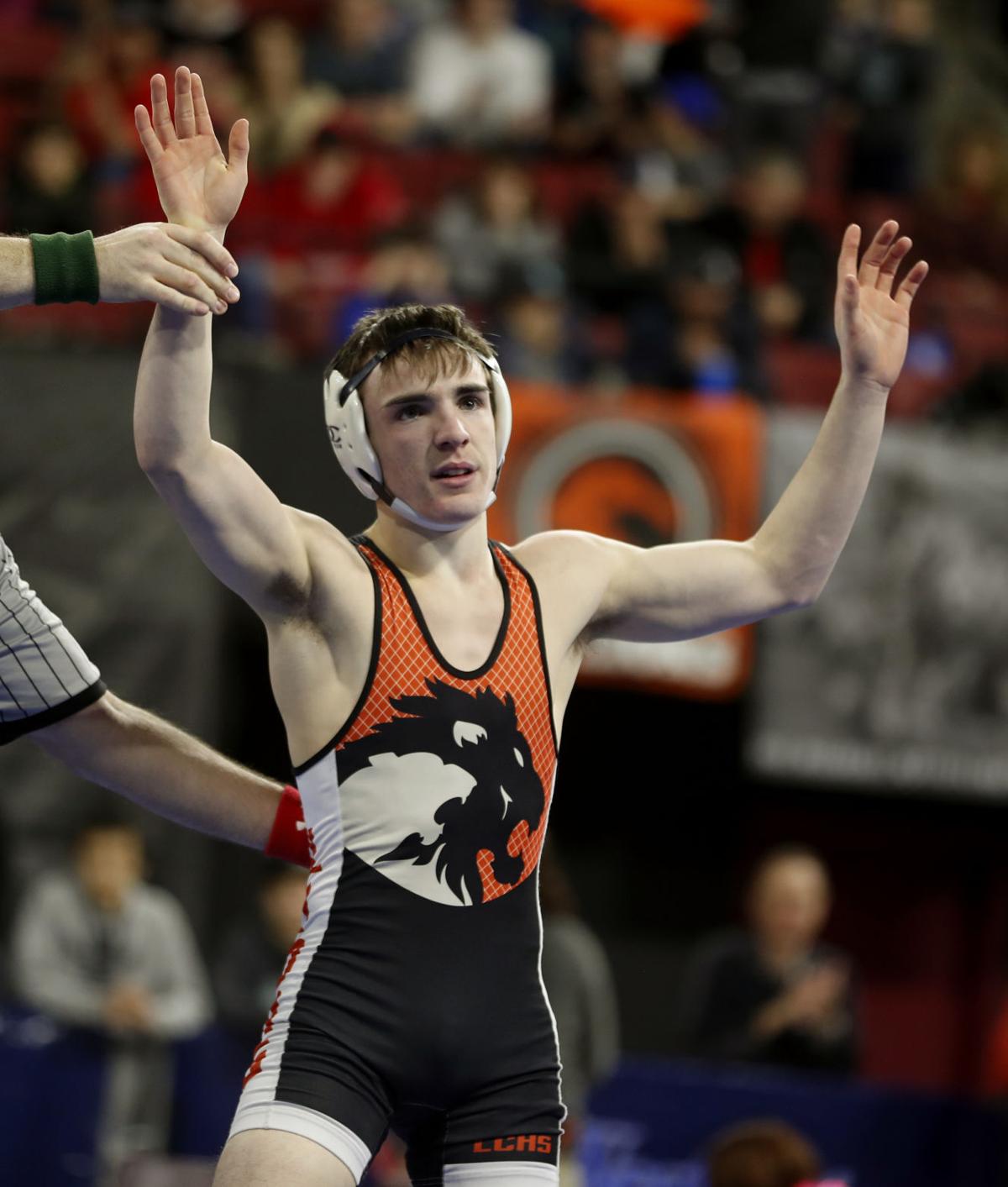 Gunnar Smith of Eureka will be attempting the join the four-time individual state champion wrestling club at the Class B-C tourney in Shelby this weekend.

Dylan Nieskens of Glasgow, pictured celebrating his state championship victory last year, hopes to win a third state title this season for the Scotties. Glasgow, the defending champion, is one of the favorites in the team race as the State B-C wrestling tourney begins Friday in Shelby.

Gunnar Smith of Eureka will be attempting the join the four-time individual state champion wrestling club at the Class B-C tourney in Shelby this weekend.

BILLINGS — Divisional trophies have been won and individual placement at the Eastern and Western events have been settled.

One of the wrestlers who will undoubtedly have many following him will be Gunnar Smith of Eureka, who is aiming for his fourth state title.

Junior Trae Thilmony (30-1) of Thompson Falls-Noxon, who was a state champion last year at 120 pounds and finished third as a freshman at 113, defeated Smith 12-10 in overtime for the 132-pound title at the Western B-C. Only 36 wrestlers have claimed four state titles, with Leif Schroeder of Bozeman being the last to achieve the feat last season.

Smith is 30-2 this year with his only losses to Cooper Birdwell of Lewistown, who is shooting for his fourth State A title this weekend in Miles City, and Thilmony. Smith claimed his previous state titles at 126, 120, and 113 pounds.

“He’s very pumped up. He is definitely ready to redeem himself after his loss last week,” said Eureka coach Danny Lemer. “We sat down and watched his tape and saw where we broke down on some fundamental errors and were able to correct that. He’s definitely ready to go this week.”

Lemer said Smith, who overcame arthroscopic surgery on his knee in December of last season to win his third title, is healthy this season.

“This is actually the first year he’s had a full year of wrestling where he hasn’t been injured and sat out half the season,” Lemer said.

Thilmony and Smith are on opposite sides of the bracket. If they meet again it will be in the 132-pound finals on Saturday night.

“They are both amazing competitors,” Lemer said. “We are only looking at one match at a time, but we are hoping we’ll see Trae in the finals.”

The defending state champion in Class B is Glasgow, which topped Huntley Project 154-134 last year. Eureka was third last season with 126 points, Whitehall fourth with 117 and Class C Circle placed fifth overall in the combined B-C with 102.5 points.

For the first time this year, there were two “super divisionals” instead of four divisionals.

Huntley Project claimed the Eastern B-C at Glasgow with 260 points and the Scotties were second with 255.5. Circle was third with 115.

• The Scotties have 14 wrestlers at the state tourney and coach Jory Casterline likes the position his team is in as it chases a 14th state title.

“We are in the same boat as we were last year. Huntley beat us at divisionals and we still won a state title,” Casterline said. “Nothing has changed. We are still focused on that state title. We just need to stay focused, and wrestle at a high level and we’ll be OK.”

The Scotties have three defending state champions in senior Colten Fast (152, 34-2), senior Dylan Nieskens (205, 38-1), and senior Cooper Larson (182, 23-7). Both Fast and Nieskens are going for their third state titles. Fast has won state titles the past two years and was third as a freshman and Nieskens is a three-time finalist, having finished second as a freshman.

“Saturday night at the tournament we had a good talk,” said Casterline, noting Glasgow is aiming for the state title. “Yesterday (Monday) I told them to relax and we’ll get back in the room. We’ll get back in there and continue to do what we do and have a good week of practice.”

• The Red Devils also qualified 14 wrestlers as they seek their seventh state title and first since 2000.

“We qualified 14 kids and had a great weekend of wrestling,” Project coach Tim Kaczmarek said. “We are just looking to carry it over to one more week and see what happens.”

Loveridge, Selman and Cade Buchanan (205) were all second at divisionals for Project.

“I think it will be another tight race, but I definitely like the seeds where we came out and where we are headed in,” Kaczmarek said. “Our kids competed hard and I’m looking forward to them doing it again.”

• Jefferson won the second divisional in coach Troy Humphrey’s 23 years as coach, as the Panthers also won the Southern B-C in 2018.

“I’m just ecstatic about it. Realistically coming into the tournament, I figured we had an outside shot at getting a trophy,” Humphrey said. “To actually come away the champion is above what I ever imagined.

“We didn’t have any individual tournaments and it was tough to gauge. I knew we had a good dual team, but for individuals I didn’t know. My expectations were a little low; we should have shot for the moon.”

Jefferson will be advancing eight wrestlers to the state tournament.

Anderson, a junior, is a two-time state placer, taking third last year at 103 and fourth at the weight class in 2019.

Humphrey said his team wasn’t at full strength until the final stretch of the regular season.

“We came out of nowhere and nobody really expected us,” he said. “Most of the year I was wrestling with nine to 12 kids on my dual team. It was a revolving door between injuries and close contacts.

“I couldn’t really gauge where we were at. We won a ton of duals and were bumping kids up in weight classes, but it wasn’t until the last week of the regular season that I put all 16 of our guys out in a competition and we were at full strength in duals and the kids said we can do this.”

• Eureka, which won the State B championship in 2017, has seven total wrestlers advancing to state.

While Smith has turned in another stellar year, teammate Kyle Durden (126) has also been outstanding. Durden, a senior, is 33-0 and won the Western B-C divisional. Durden was the runner-up to Fast at 132 pounds last season and placed third at 126 in 2019.

“We have an outside chance (for a state trophy),” Lemer said. “The numbers are against us. If we can pick up some wins in the first round, we’ll be in there for a slight chance for third place.”

“We got a third-place trophy,” he said. “They said 1990 was the last time we brought home any hardware from divisionals.”

Circle has seven wrestlers qualified for state and if everything goes as the Wildcats hope, they could sneak into the state trophy hunt as well.

“We have a better chance than last year and we were fifth last year,” Taylor said. “We might be better this year, we haven’t wrestled the matches yet.”

Krayle Stormer won the 126-pound bracket at divisonals and is 28-2 this year. The senior won last year’s 113-pound state title and was first at 103 the season prior. As a freshman, Stormer was third at 103 pounds.

Senior Cole Becker (20-6) was second at divisionals at 152 pounds and was last year’s state titlist at 145.

• Colstrip senior Rylin Burns wrestled to the Eastern B-C 182-pound title. Burns has compiled a 28-1 record this year. Last year, Burns won his first-round match at state by forfeit and then had falls in 1:08, :57 and :28 to capture the 160-pound crown.

In 2019, Burns was the classification’s 145-pound titlist and as a freshman he was fourth at 132 pounds.

• Nathan Blodnick of Anaconda was the State B-C 103-pound titlist last year and won the 113-pound Western B-C divisional. The sophomore is 14-3 this year.

• At 103 pounds, sophomore Brayden Linville is undefeated at 18-0 and captured the Western divisional for Three Forks-Ennis.

• Senior Dallen Hoover has compiled a 30-0 record for Whitehall at 152 pounds and was the Western divisional titlist. Last year, Hoover was the state runner-up at 145 pounds.

• At 160 pounds, senior Coy Cohenour of Three Forks-Ennis is undefeated with a 16-0 record and he won the Western divisional.

• Junior Austin Vanek of Cut Bank won the Western divisional 170-pound title and is 24-1. He placed third at state at 160 last year and was third in the classification at 152 as a freshman.

• Senior Dane Chojnacky (182) of Thompson Falls-Noxon carries a record of 31-2 into the tourney after winning the Western divisional.

• Caden Crowell of Cascade is 31-1 at 285. The junior won his weight class at divisionals. He was fifth at state last year at 170.

On Saturday, there is only one session and that begins with the semifinals at 9 a.m. The finals are slated for approximately 2:30 p.m.

With the ongoing coronavirus crisis, on Friday spectators will only be allowed for the session in which their wrestler is competing.

On Saturday, only fans for the wrestlers competing will be in attendance. The spectators of eliminated grapplers aren’t allowed entry to aid in social-distancing efforts.

Check back for continuing coverage from the three boys wrestling tournaments Mar. 5-6, 2021.

State wrestling tournaments to be streamed on NFHS Network

Boys tourneys to be held at three sites this weekend.