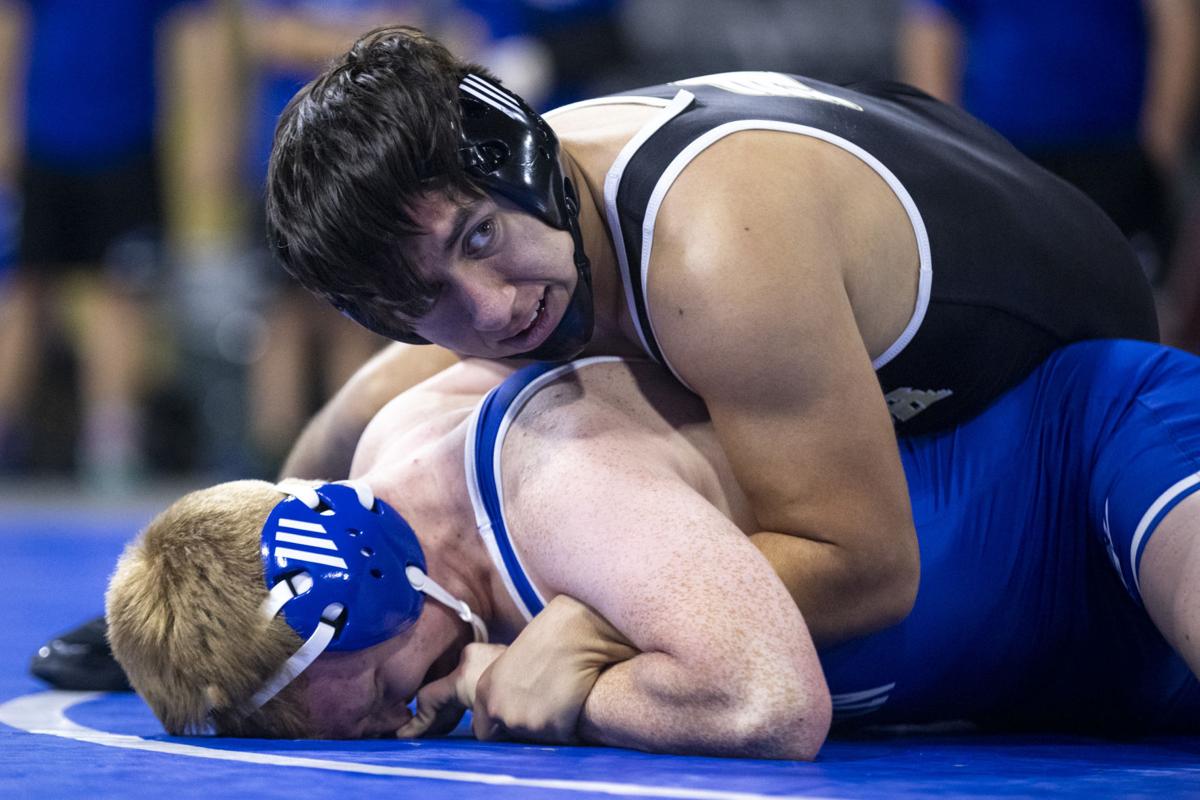 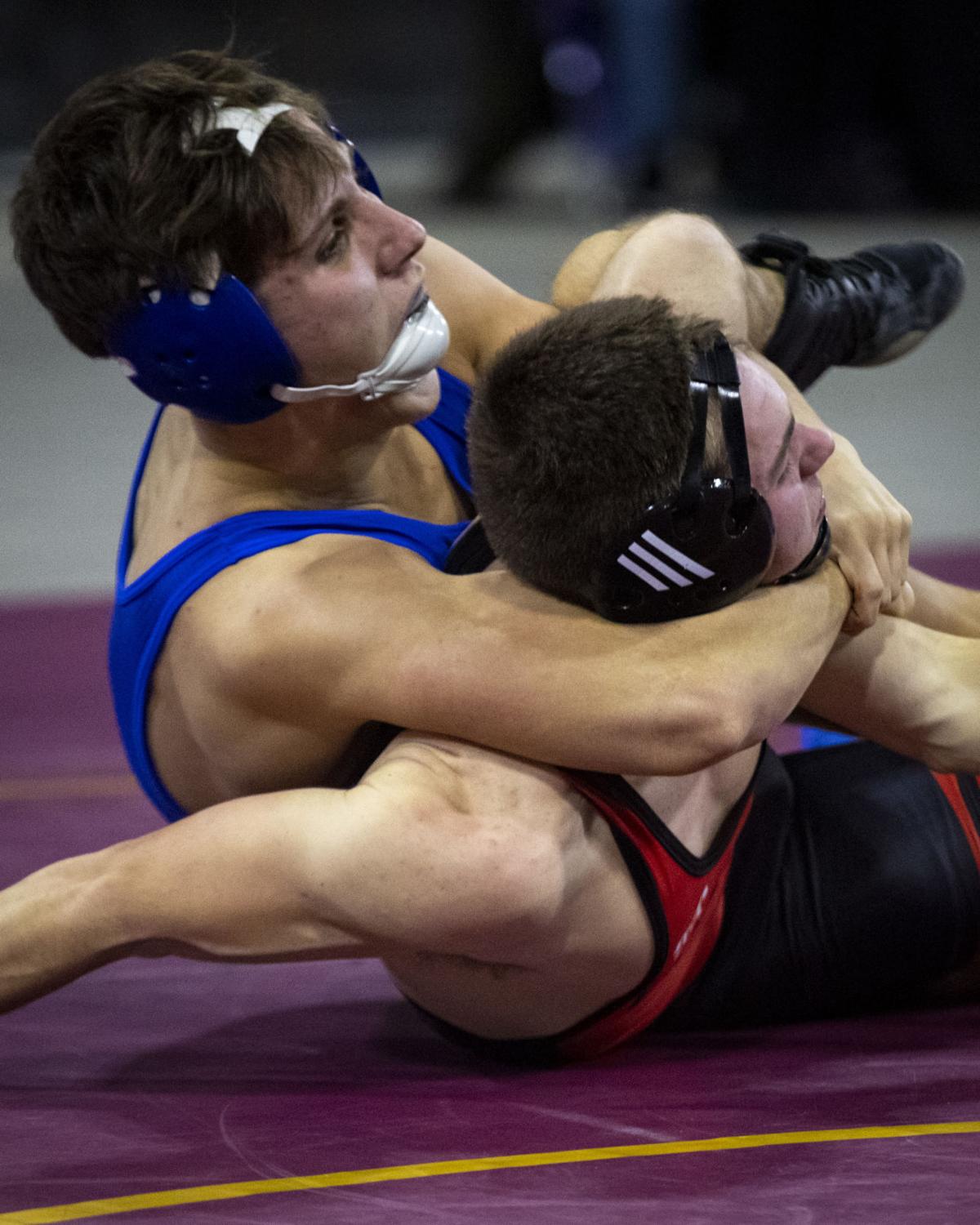 BILLINGS — The long wait was worth it.

After beginning practice more than a month ago, wrestling teams from Billings West, Billings Skyview, Bozeman and Bozeman Gallatin made their season debuts on Friday at First Interstate Arena at MetraPark.

The Bears recorded a 76-0 victory over first-year Gallatin and a 72-5 win over the Hawks.

Skyview started with a 57-18 victory over Bozeman and followed with a 54-24 triumph against Gallatin.

“It felt amazing to compete,” Freitag said after the matches had concluded.

The @b_westwrestling team meets before their dual @MetraPark on Friday. pic.twitter.com/grBFRB6OvQ

Along with being his first high school competition, it was also the first time Freitag wrestled at the Metra — usually the site of the all-class state tournament.

The four duals on Friday were originally scheduled to be held at Skyview and West, but were switched to the Metra in a social distancing effort. It’s believed to be the first regular season high school wrestling matches contested at the Metra.

Cameron Savaria was another wrestler who posted a 2-0 record. The 160-pound senior scored two pins for the Falcons.

Savaria, who finished fifth at the State AA meet last year at 145 pounds, said it seemed out of place to start his season in the building where last year ended, but he got used to it pretty quickly.

“I kind of liked how we did it in the Metra today,” he said. “It was weird, but I got used to it pretty quick. The only time we wrestled here is at the state championships.”

But when he began getting loose on the mat prior to the duals with practice partner Paolo Salminen, a sophomore 152-pounder who was also 2-0 with two pins for the Falcons, Savaria’s thoughts quickly turned to the task at hand.

Salminen, the state runner-up last year at 152 pounds, said it didn’t take him too long to find his rhythm.

“I felt good,” he said. “I felt like after I got the takedowns I was able to capitalize on scoring positions to falls.”

While the Falcons picked up two victories, Salminen said his team still has things to work on.

“We have a lot improvement we need to make,” he said. “I saw a lot of good things, but we do need improvement.”

West freshman Keyan Hernandez also had a stellar debut. Competing at 103 pounds, Hernandez claimed a technical fall victory in his first career high school match and came back to score a pin in his second.

Hernandez began wrestling when he was three years old, he said. He is the son of longtime West coach Jeremy Hernandez.

“It feels good,” Keyan Hernandez said. “It was fun. It was fun to wrestle as a West High Bear under my dad finally.”

The younger Hernandez thought the Bears performed well, saying, “we look pretty tough and I think we’ll be pretty good this year.”

“It will be crazy, my first Senior-West dual,” Hernandez said.

Nate Laslovich is now coaching the first-year Gallatin Raptors after having been the head coach for the Bozeman Hawks since the 2006-07 season.

And while the Raptors were on the wrong end of the outcome on Friday, Laslovich said it is an exciting time at Gallatin.

There are 40 wrestlers on the team, including eight girls as girls wrestling is now being sanctioned by the Montana High School Association.

As for the immediate goals, Laslovich said he wants to “get these guys fundamentally and physically better and get them to a point where they are competing by the end of the year.”

The 1995 Missoula Sentinel graduate, who was also Laurel’s head coach from 2002-05, is happy with the progression of the Raptors, who only have freshmen, sophomore and juniors enrolled at the school. The school district had earlier decided the Class of 2021 seniors would finish their high school education at Bozeman High.

Felix Petersen, who placed sixth at last year’s state tournament at 138 pounds as a Bozeman Hawk, is the lone state placer on the team. Petersen is a 152-pound junior.

“We are young and inexperienced, but super excited to wrestle,” Laslovich said.

“We have room to grow, like everyone, but these guys are fundamentally improving and working super hard and are a good group and tough.”

The @GallatinRaptors are ready to dual after ending warm-ups. @MetraPark pic.twitter.com/xGao9HkbRM

Hawks working on growing the program

With Laslovich coaching Gallatin, Bozeman High has a new coach in Sean Dellwo, who previously coached the Belgrade Panthers and was an assistant coach at Bozeman High during the 2010-11 season.

While Gallatin is a first-year program, the Hawks are also rebuilding as seniors remained at the school this year, but juniors, sophomores and freshmen in Bozeman went to the high school they were assigned to based on a defined boundary, explained Dellwo.

The Bozeman Hawks are at @MetraPark pic.twitter.com/PsOpCxDKFe

“We are both trying to build programs,” Dellwo said. “They had a peak year last year and graduated 11 seniors.”

In addition, Dellwo said approximately 10 student-athletes didn’t compete in wrestling this year because of COVID-19 concerns.

Overall, Bozeman has 15 wrestlers, all boys, on its roster. The lone returning state placer for Bozeman is Avery Allen, who won the state title at 132 pounds as a freshman. Allen is competing at 145 this year.

“This first year we are trying to establish our wrestling mentality and from there each year we want to grow,” Dellwo said, adding with the coronavirus pandemic “there wasn’t much of an offseason.”

And while there will be growing pains, Dellwo said the Hawks are enjoying the battle.

“It is fun. It always is,” he said. “Any time we get to wrestle, it’s the greatest sport on Earth.”

While there more than likely have been JV matches in the past featuring a girl wrestler facing another girl wrestler with both being from one of the three Billings Public Schools high schools, a first occurred during this inaugural year of girls wrestling in Montana.

On one of the mats where the JV and extra matches were being held, two Billings girls squared off against each other for the first time in Magic City crosstown action during this inaugural season.

This year there will be a girls-only state wrestling tournament at the end of the year on a date and location to be determined because of the pandemic.

“It feels really, really good,” said Torres. “I was kind of nervous to be honest.”

Torres, who also wrestled last year for East Helena, moved to Billings in the offseason and credited her coaches and teammates for helping her achieve the victory.

“I like Skyview,” she said. “The wrestling program is really good and is so big compared to back home.”

Ruiz said it was her first career match.

“Just to win at least a few matches,” Ruiz said when asked what her goals were. “The biggest goal is to progress and get better at the sport.”

Ruiz said she joined the team a few weeks ago.

“My whole life I did basketball,” she said. “I wanted to try this sport my whole life.”

Wrestling at Metra should make for a cozy atmosphere Friday