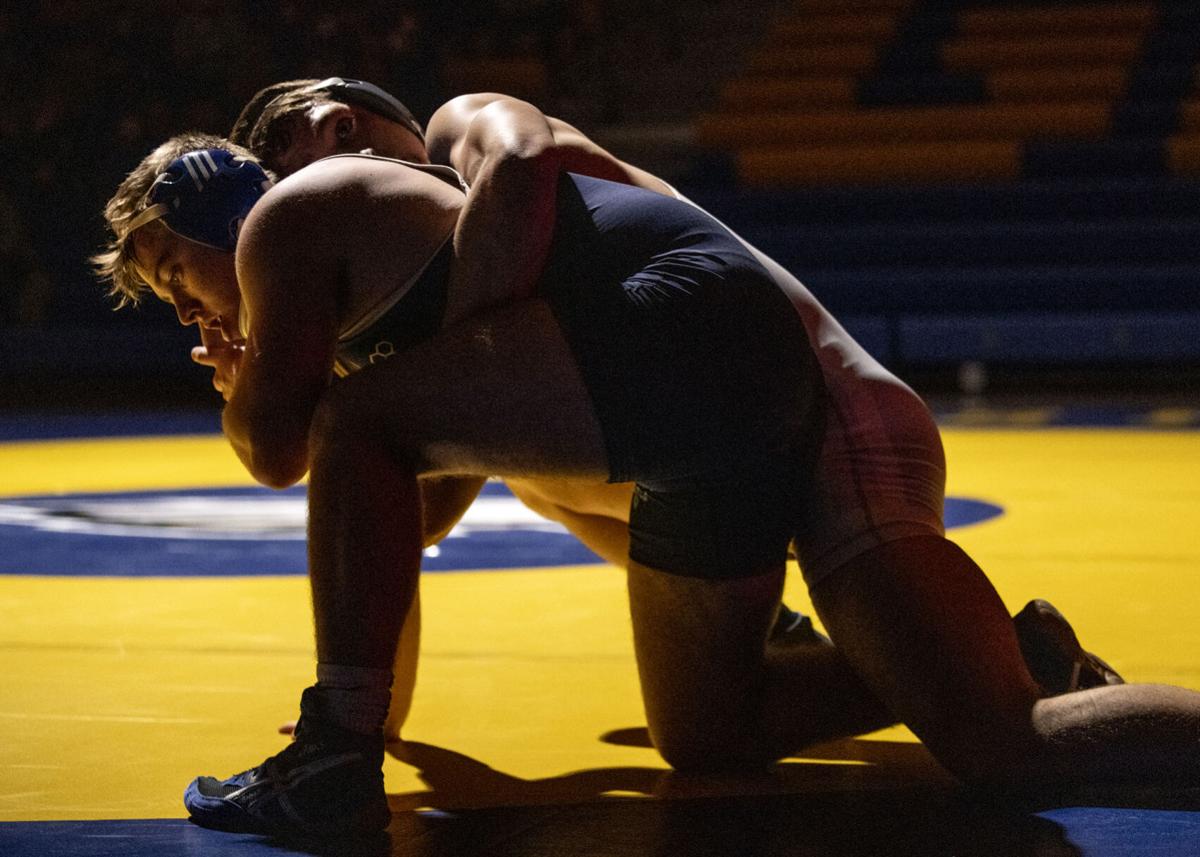 Sentinel’s Zac Crews, top, grapples with Big Sky’s Cole Sandberg during their 182-pound bout at Big Sky on Tuesday. Crews, an all-state football player with Division I offers, opted for wrestling over basketball this winter. 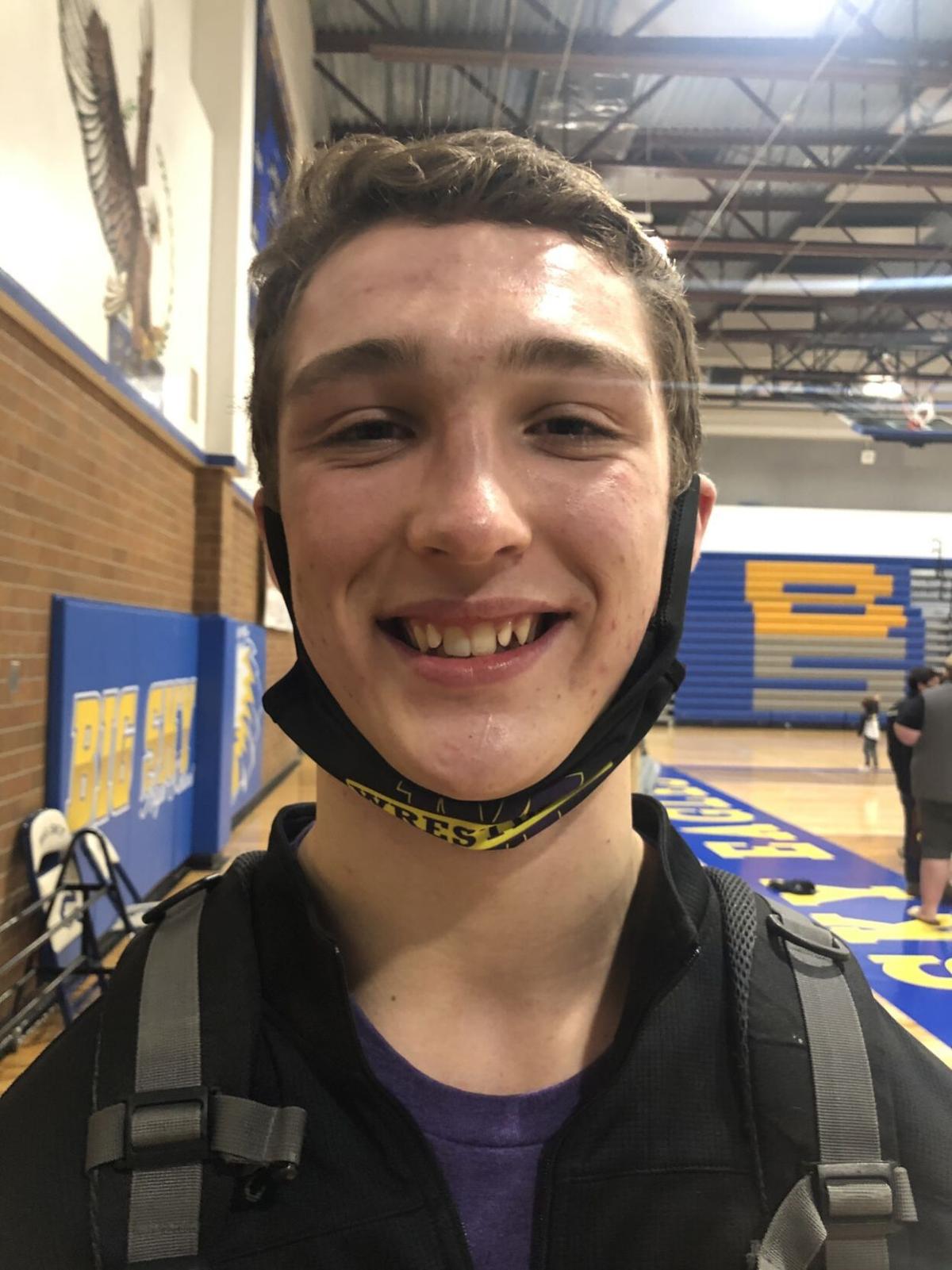 MISSOULA — Missoula Sentinel’s Zac Crews had a full smile to flash when he won his high school wrestling debut in the team’s upset win over Missoula Big Sky in the season opener on Tuesday.

It was his first competition since he broke one of his front teeth in the football state title game, which capped a season in which he proved himself as one of the top juniors in the state. He picked up full-ride offers from Montana and Montana State during the fall and said he began talking with perennial title-game participant North Dakota State and Eastern Washington.

Crews is now tackling wrestling, trying to cut his teeth on the mat as he traded in his basketball jersey for a wrestling singlet. The Spartans basketball team, like the football team, is a state title favorite and includes his older brother Haiden Crews and his friends, but he turned down the lure of another state title to pursue one of his childhood loves.

“I’ve watched my little brother wrestle and helped him through Little Guy Wrestling, and I missed it, so it was great to get back out here on the mats,” said Crews, who continues his wrestling journey when Sentinel competes at Kalispell Flathead and Kalispell Glacier on Friday.

“With basketball, I lost a little bit of the passion I had last season. My parents always preached: ‘Don’t do something if you don’t love doing it.’ I followed my heart and chose wrestling.”

In his first wrestling match since seventh grade, Crews showcased the athleticism that’s attracted college football coaches to the all-state tight end and defensive end. His 12-4 win at 182 pounds was highlighted by a hip toss and throw and his riding time, controlling his opponent while down on the mat.

The outing impressed Sentinel coach Jeremy LaPorte, who’s known Crews since Crews started Little Guy Wrestling at 6 years old at Lolo Wrestling Club. LaPorte heard the rumblings this fall that Crews might wrestle again, but he didn’t believe it until Crews was on the mats showing his versatility.

“He’s a good athlete,” LaPorte said. “A lot of times at the upper weight classes, if you’ve got good balance and good awareness, then you’re going to win a lot of matches even if you don’t know the wrestling moves. He’s going to get there. He did some stuff tonight I didn’t even know he could do. Once the wrestling moves start coming in, he’s going to be tough.”

Getting into wrestling shape was a renewed challenge. He had a quick turnaround after a 10-game football season, which ended just a couple weeks before wrestling practice.

Being in quality wrestling shape is different than football, which requires quick bursts of speed and hard hits spread out over 48 minutes. On the wrestling mat, he has to go all out for three periods of two minutes apiece in a one-on-one physical tussle.

“That first week of practice was the hardest thing I’ve done in a long time,” Crews said. “These coaches have helped me so much, and after I got that under my belt, I couldn’t have felt more comfortable coming into this match.

“I did have a lot of jitters. The butterflies were going in my stomach. Once I got in it, it felt like the old days wrestling out there.”

Coming into high school, Crews chose basketball over wrestling because he felt his height and motor would fit better over there, which bummed out LaPorte, who was looking forward to coaching him. However, he started to realize basketball wasn’t for him last season when he fouled out of games more often than he would’ve liked while coming off the bench.

Crews now gets to display his aggression on the wrestling mat. He’s hoping the physical nature of the sport will benefit him on the football field in his senior season and into college.

“This is better with helping me with leverage and getting nasty in the trenches on the field by being here on the mats,” Crews said.

He originally thought about waiting until after the wrestling season to get his broken tooth fixed as a sense of “personal pride.” LaPorte mentioned waiting because the tooth could break again in wrestling, but the exposed nerve endings became too much for Crews to leave it unfixed.

For now, he once again has a full smile to complement his return to a sport he loves.

“It’s a tough sport,” LaPorte said, “but I’ve known him since he was little, and he’s always been a tough kid. I’ll take a kid like him all day.”