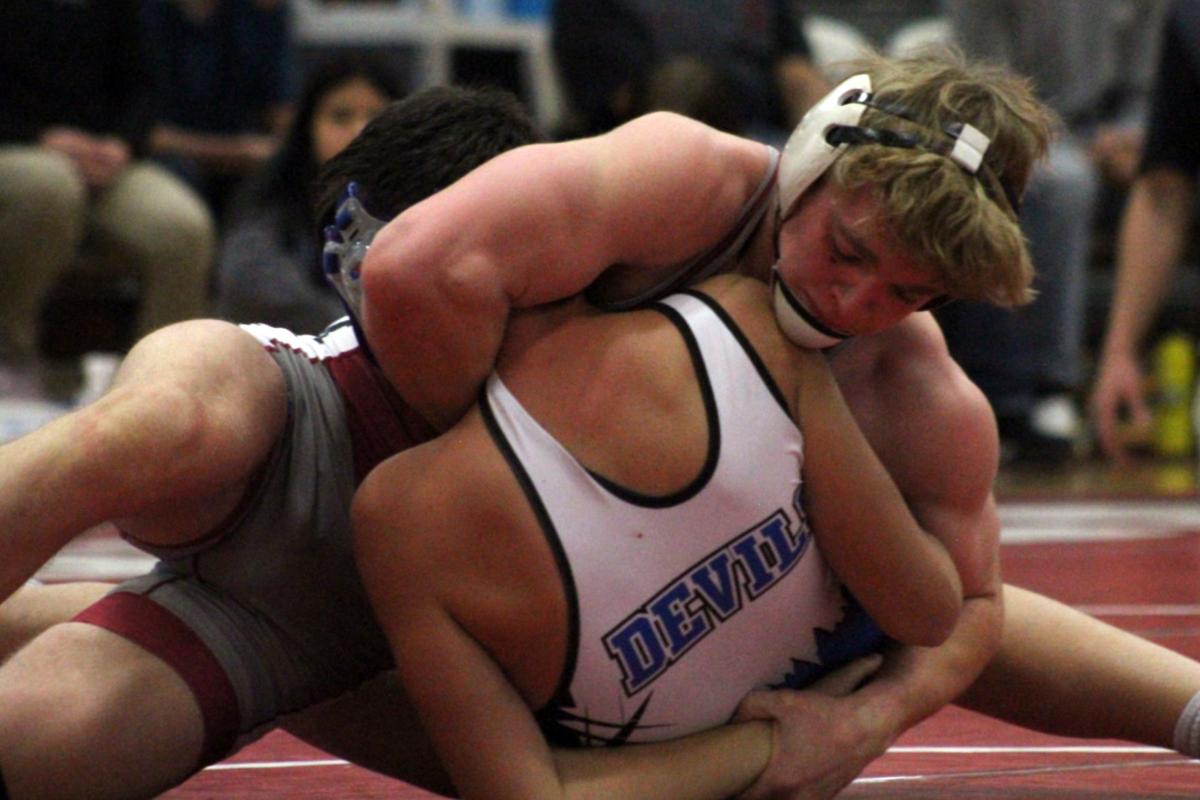 Hamilton's Bridger Williams, top, works to pin Corvallis' Liam Sutherland on Dec. 17 in Hamilton. Williams, one of the favorites for a Class A state wrestling title, nearly lost his leg over the summer while working on a fishing boat in Alaska. 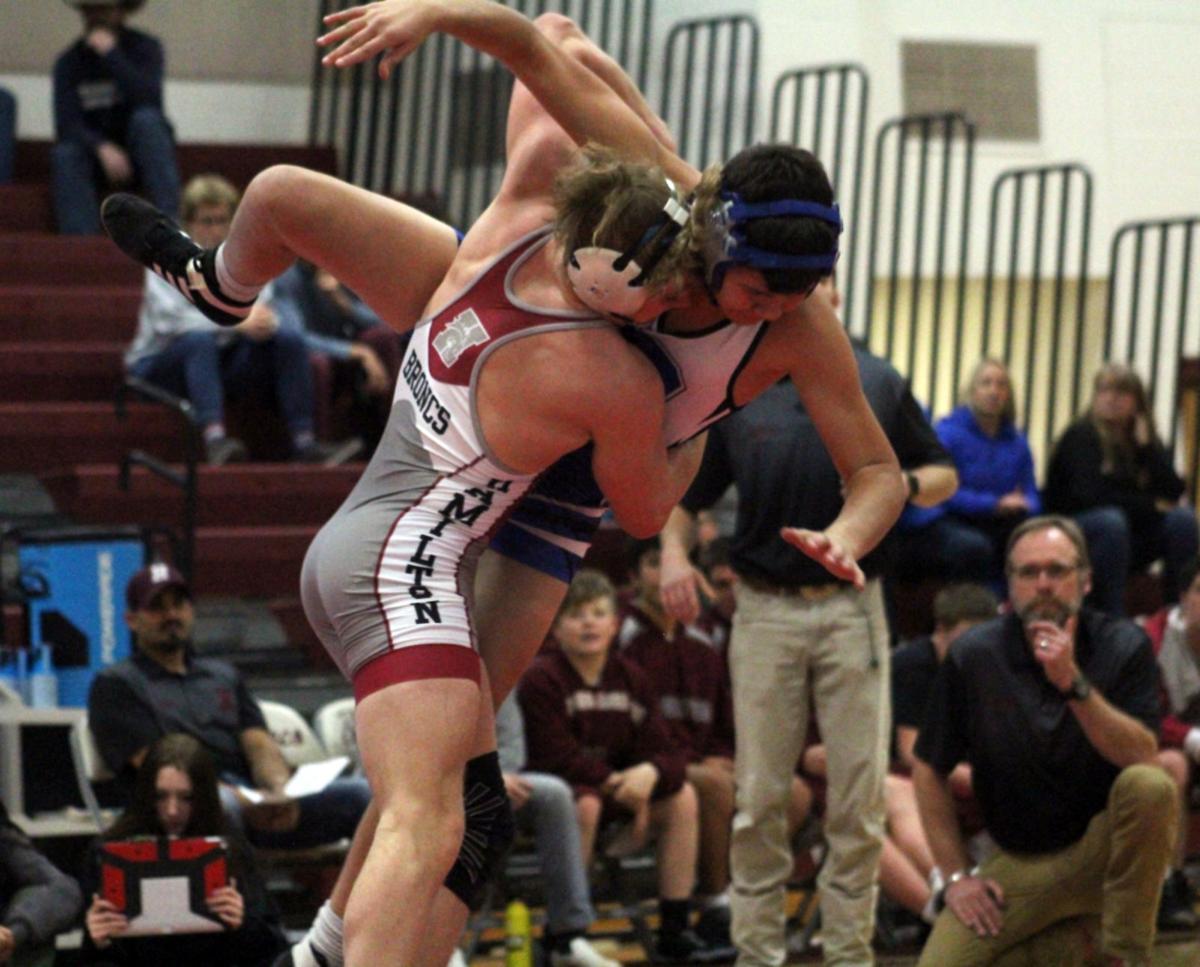 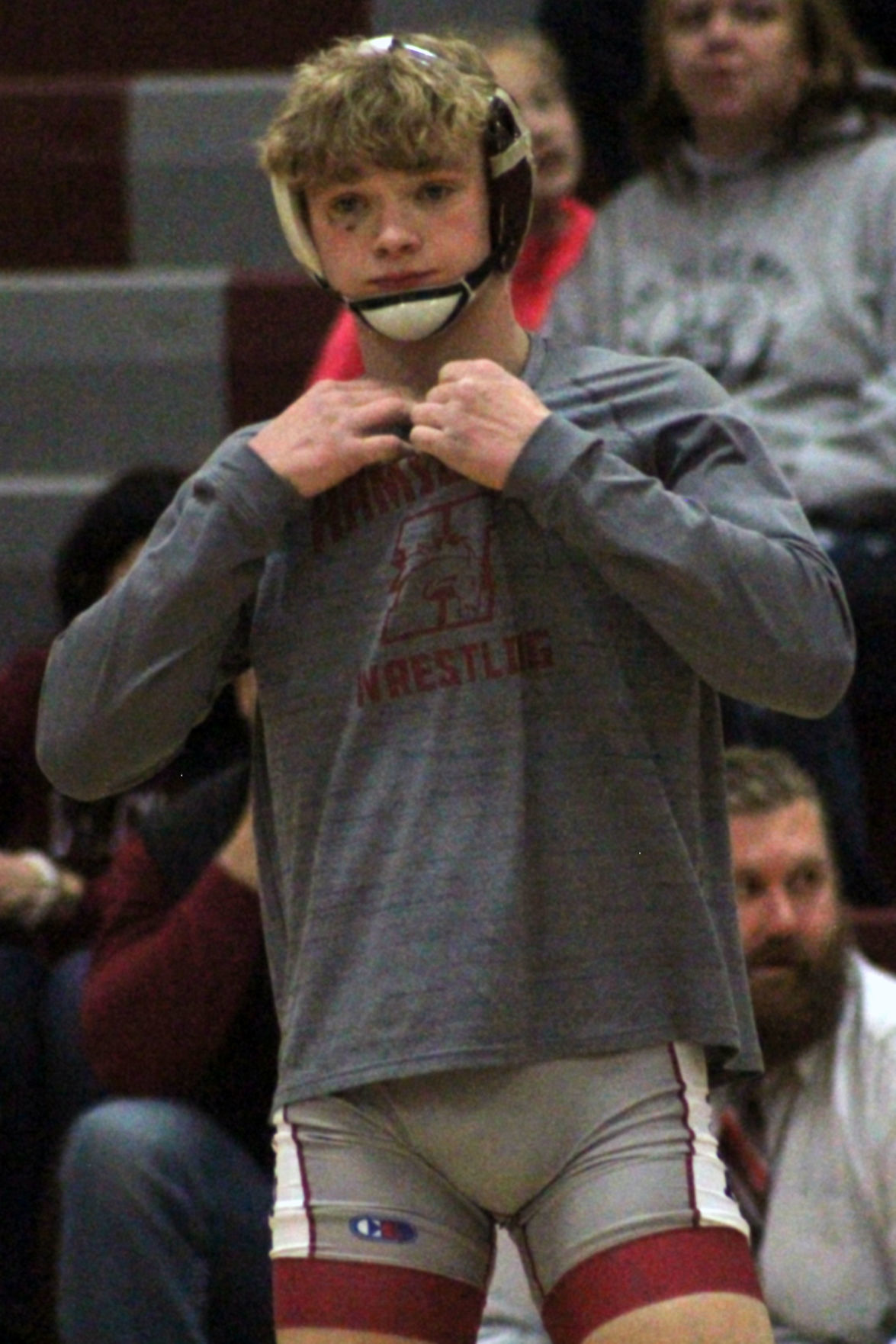 Hamilton's Bridger Williams gets ready for his match against Corvallis on Dec. 17.

Hamilton's Bridger Williams, top, works to pin Corvallis' Liam Sutherland on Dec. 17 in Hamilton. Williams, one of the favorites for a Class A state wrestling title, nearly lost his leg over the summer while working on a fishing boat in Alaska.

Hamilton's Bridger Williams gets ready for his match against Corvallis on Dec. 17.

HAMILTON — Bridger Williams is more aware than most how difficult it is to win a state wrestling title. The Hamilton senior has placed three-straight seasons at the Class A state wrestling tournament, taking third the last two years in Billings.

But Williams' battles on a wrestling mat are nothing compared to his literal fight for life and limb last summer off the Alaskan coast.

"I was over the end of the boat and I’m holding on for dear life," said Williams, who has worked on his extended family's salmon fishing boat in the Bering Sea for the last three summers. "I knew that if I let go, I’d go into the water and I would have drowned."

It was all of 20 seconds, Williams estimates, that he dangled between his fishing boat and a tow line connected to a lead-weighted net being let out into the Bering Sea. He took about twice that long to quickly win by pin last Tuesday in the Broncs' dual against Corvallis.

During that match, Williams wore a soft brace on his left knee, an otherwise inconspicuous memento to all that he almost lost a few months ago.

Williams was alone on the deck of his uncle's boat while guiding the fishing net's line out to sea the day of his accident. The Montana wrestler was experienced and he loved the work — it was a great way to save money for college, he said, a place he'd ultimately like to wrestle. His dad also Hamilton's wrestling coach, Chad Williams, had worked on a fishing boat when he was younger. Bridger's brother is also a fisherman.

Even after Bridger's eventual mishap, he still wanted to finish out the summer on the ship.

"The cool thing is most of the other guys on the boat are also wrestlers (from elsewhere)," Bridger's dad said. "They know how to work hard and they go hard. It’s an intense job for intense type people."

Intense is also a good way to describe the moments that followed when Bridger noticed he was standing in the middle of a loop in the net's tow line.

"I saw it tangle around my leg," he said. "I tried to take it off, but it was already way too tight."

Immediately the hundreds of pounds of rope and net — already trailing and sinking behind the moving boat — started pulling Williams toward the frigid ocean and likely a certain death.

As Williams was dragged to the edge of the boat, he reached out and grabbed one of the vessel's rear air horns. Even the brawny and well-built 160-pound wrestler doesn't know how he held on.

The combined weight tugged on Williams leg, just below his left knee where the rope had cinched tight. He knew the pressure would lure him into the water in a matter of moments.

The skipper threw the boat into reverse just before Bridger's strength gave out. The maneuver provided enough slack in the still-descending line for Williams to remove his leg from the lasso.

He was alive, but he wasn't out of hot water.

"When I get back onto the boat I took off my oilskins and I looked and my entire leg is just completely purple," Williams said of repelling his waterproof gear. "I knew something was wrong. I couldn’t walk, I couldn’t feel anything."

Williams had compartment syndrome in his left leg. The tow rope had acted as a tourniquet, pinched his arteries and cut off blood flow to his leg.

The fishing boat raced to a nearby port, the tiny fishing village of Egegik, Alaska, but the health clinic in the town of 100 people couldn't help Williams. He was transported in a plane to a hospital in Dillingham, a slightly larger Alaskan outpost.

"When I (got there) I get X-rayed, an MRI, all that stuff," Williams said. "The doctor comes back to me and says, ‘I have some really bad news for you.

"'We’re life-flighting you to Anchorage to get your leg amputated.’ I thought he was joking."

He wasn't. The doctor explained that the trauma may lead to gangrene and be life threatening. Before boarding another emergency airplane, Bridger called his dad — who had already booked his ticket to Alaska after hearing of the accident earlier that day.

"(My dad) talks to the doctor and he gets back on the phone with me and the first thing he says is, “'Well, if you lose your leg, at least you can wrestle at 113 pounds.’" Bridger said, chuckling as he recalled the macabre conversation.

Bridger's dad was merely trying to lift his son's spirits. For the connecting trip from Montana and ensuing flight to Alaska, wrestling was the last thing on the Hamilton coach's mind.

His son's well-being was all that mattered.

"My whole flight from Seattle to Anchorage I was thinking, how am I going to tell my son when he wakes up, whatever news it is?" Chad said.

Meanwhile, Bridger was fixated on his wrestling future while on the long flight from Dillingham to Anchorage. Bridger used his love of the sport to power through a painful impromptu physical therapy that he thinks may have very well saved his leg.

"I started just rubbing my leg. I was doing everything I could do to get blood flowing again," Bridger said. "The nurses on the plane said I needed to stop moving it, it could be broken, but I just kept doing it. I didn’t give up, I kept working it out."

After touching down in Anchorage, Bridger was wheeled into the hospital. He felt like he was regaining some feeling in his leg, but time was running out.

"They rushed me into this surgery room and I see all the doctors with gloves up to their elbows," Williams recalled, staring into the distance at the Hamilton gym. "And they had blood-shield masks. I (could) see a bone saw."

The doctors cut away at the high schooler's socks and pants and prepped for surgery, but Bridger needed them to stop. He had started wiggling his toes.

"I looked at the doctor straight in the face and I said, ‘You need to stop, I can move my leg.’"

After hours of tests, the Anchorage doctors said they could save Bridger's leg, but he might need additional invasive surgery. The next morning, Bridger had made enough of a recovery that the doctors had decided to hold off on any sort of gruesome medical procedure.

By the time Chad arrived at the hospital to meet his son, Bridger was already sitting in the hospital's waiting room. Bridger had crutches, but there was a cast on his left leg.

"We were lucky. Very, very lucky," Chad said, a sigh explaining his relief for his child more than his words could.

It's the kind of luck that makes a person evaluate all that's important in their life.

For Williams, a big part of his life plays out in those fleeting seconds on the wrestling mat. Not that he did before last summer, but even more so now, Bridger never takes for granted the opportunity he's been given to wrestle this season.

Chad said Bridger hasn't missed a day in the weight room or running to stay in shape since he could walk again.

"It sure makes me appreciate it a lot more," said Williams, already an incredibly humble kid who will greet opposing coaches with a two-handed handshake and a friendly embrace. "You remember the last three years (of school). You go to practice, you get tired and you want to go home. But now it’s like, I could have never been here.

"It makes me a lot more grateful for having this team, having my brother and my dad as a coach, working hard in practice, having such great teammates and it just drives me to work hard in practice."

The whole incident meant months of rehab for Bridger, who had to miss his senior season of football. The knee still isn't 100 %, hence the brace.

But the injury doesn't serve as a distraction to his goals this year. If anything, it might fuel one of Class A's favorites to his first-ever state wrestling title.

After all, it's a reminder to keep fighting and to hold on.

SEELEY LAKE — When Owen Mercado wants to be alone, he heads out to the basketball court outside the family’s home and begins to dribble.