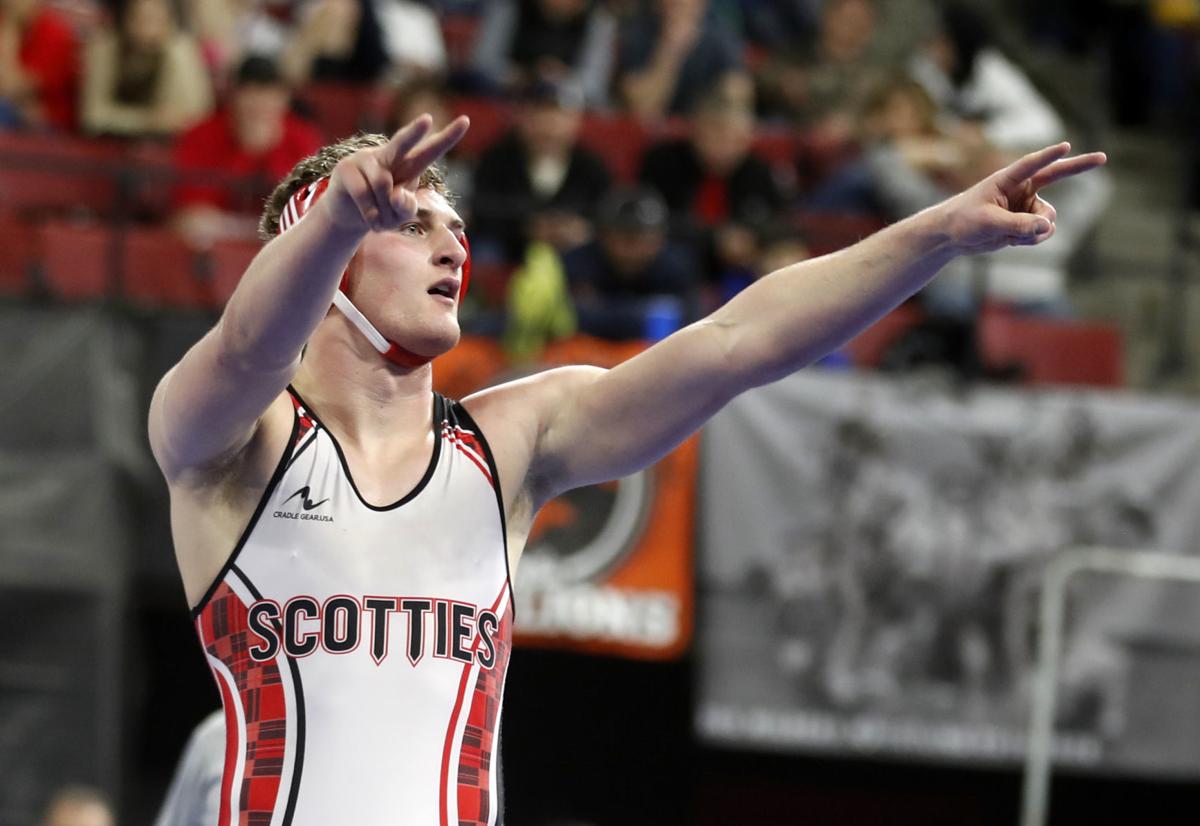 Dylan Nieskens of Glasgow celebrates his win over Kyler Alm of Florence-Carlton in the Class B-C 182-pound championship match at the state wrestling tournament at First Interstate Arena at MetraPark on Saturday. 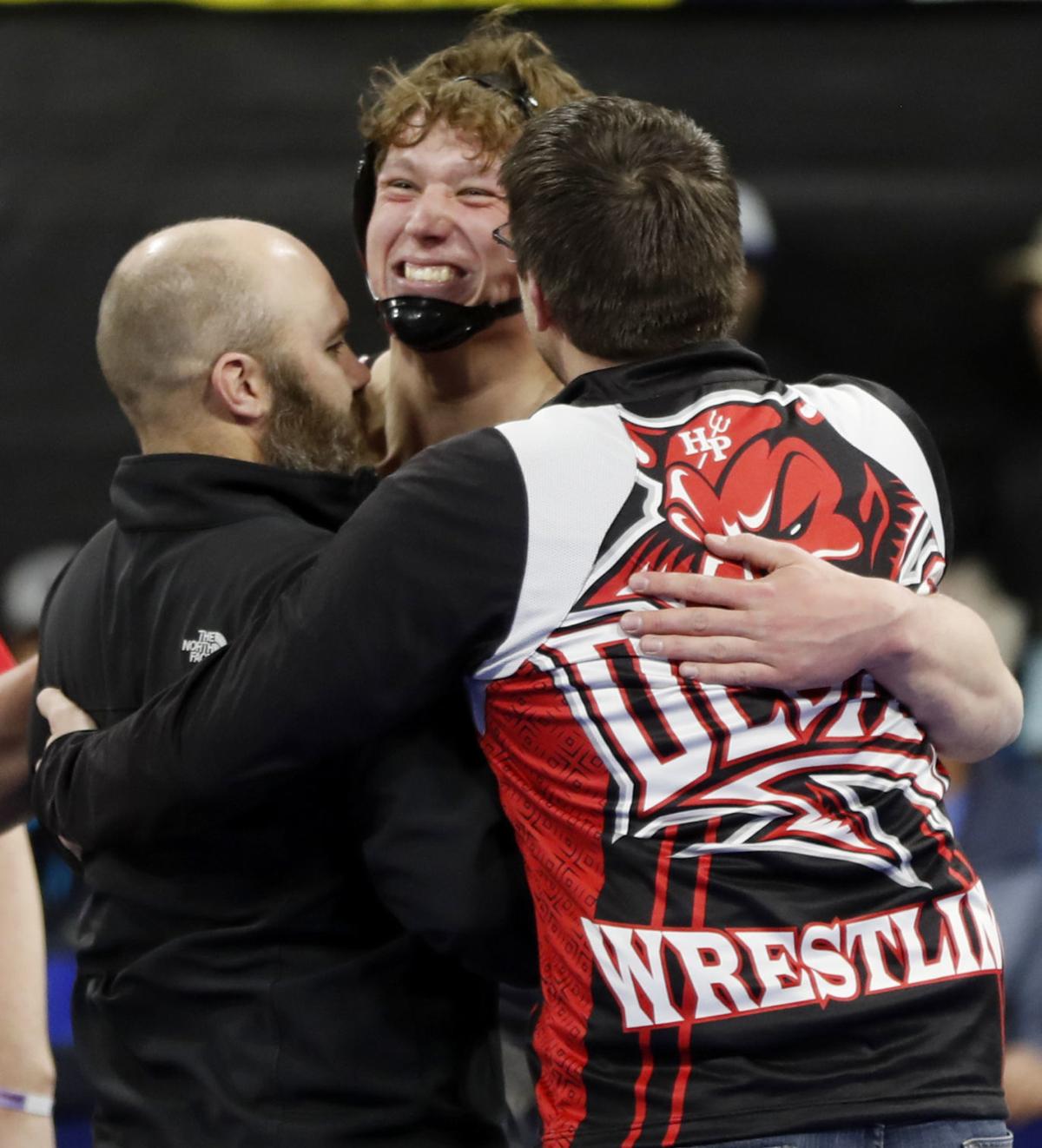 Journey Grimsrud of Huntley Project celebrates his win over Mayson Phipps of Glasgow in the Class B-C 285-pound championship match at the state wrestling tournament at First Interstate Arena at Metrapark on Saturday.

Dylan Nieskens of Glasgow celebrates his win over Kyler Alm of Florence-Carlton in the Class B-C 182-pound championship match at the state wrestling tournament at First Interstate Arena at MetraPark on Saturday.

Journey Grimsrud of Huntley Project celebrates his win over Mayson Phipps of Glasgow in the Class B-C 285-pound championship match at the state wrestling tournament at First Interstate Arena at Metrapark on Saturday.

BILLINGS — To the Glasgow Scotties, 13 was not an unlucky number on Saturday.

The Scotties, behind a phenomenal semifinal and consolation quarterfinal round, claimed the 13th state wrestling championship in the program’s history at First Interstate Arena at MetraPark when they topped the Class B field with 154 points. Huntley Project finished second with 134.

Eureka was third with 126 and Whitehall fourth with 117. Circle was fifth overall and won the Class C team title for the third straight year with 102.5 points.

According to the Glasgow Scotties Twitter account, it is the 32nd state wrestling trophy in school history. It is the first state title for the Scotties since 2010.

“It’s great. That’s always the goal,” Glasgow coach Jory Casterline said of the team title. “That is what we always talk about every year.

“These guys have been together a long time and they talked about it as junior high kids. They are a resilient bunch.”

Huntley Project held a six-point lead, 72-66, over Glasgow after the first day of competition. The Scotties started fast on Saturday.

“We went 7-0 this morning out of the gate and when you get a start like that, winning is contagious,” Casterline said.

“That was really important. We set the tone,” Nieskens added of the round.

Project coach Tim Kaczmarek said the semifinal and consolation quarterfinal round was the difference. After the semifinal round, Glasgow had 131 points, Eureka had 103 and Project had 102.

“We didn’t have a very good first round in the morning,” he said. “To come back and get some pins and wins it was good. We were in fourth place at one point today. We could have folded and ended up fourth, but we kicked it in gear and won some big matches.”

Fast, a junior, won a championship for the second consecutive season when he downed Eureka’s Kyle Durden 7-0.

“The team title means the most to me,” he said. “To win it with all these guys and my friends, that was great.”

Fast said the Scotties planned to feast on steaks to celebrate the title.

“I’m going to go eat a giant steak,” he said. “The whole team, and a bunch of people from Glasgow, will be there. It will be great.”

Nieskens won his second straight title with a 3-1 win over Kyler Alm of Florence-Carlton at 182 pounds. Larson downed Gage Schmitt of Shepherd, 5-2, in the 205-pound title bout.

Fast, Nieskens and Larson all finished undefeated in Class B-C.

Project heavyweight Journey Grimsrud, second a year ago, claimed the championship with a fall in 2:42 over Phipps. Grimsrud was also the B-C quick-pin winner with four pins in 5:19.

“It means everything,” said Grimsrud, who will play football on the defensive line for the Montana Grizzlies. “I was working throughout the summer.”

Grimsrud was disappointed the Red Devils didn’t win the team championship but has confidence the team will do well next season.

“We definitely could have gotten first,” he said. “We had a lot of young kids perform well. I believe they’ll come back and take first. There’s not a doubt in my mind.”

Circle’s Krayle Stormer (113) was munching on Spree candy after winning his second consecutive title with an 8-6 victory over Miguel Ramos of Fairfield. The junior said he only enjoys candy on special occasions.

“Probably last year at this time after I won,” he said of enjoying the confection. “Or after I won the black hat at the J Robinson. I ate some Sprees.”

Stormer said there is a reason why he limits his candy intake.

“It’s just as important as how much you eat is what you eat,” he said. “I eat pretty much a perfect diet during wrestling season. It takes the little details together to do it.”

Cole Becker also claimed a title for Circle at 145 pounds. The junior scored on an escape in the closing seconds to seal the 6-5 win over Dallen Hoover of Whitehall.

“It was nerve-racking,” Becker said of the close match.

Becker said the Wildcats are a close bunch, who “win or lose, we are right there for each other.”

The Wildcats planned to celebrate their Class C team title with pizza and wings.

“I’ve been cutting weight since the first week of November and ready to be done,” Becker said. ‘I’m going to eat until I can’t eat any more.”

Eureka junior Gunnar Smith won his third straight crown when he pinned Roper Mycke of Conrad in 1:02 for the 126-pound title.

“It’s a real blessing from God,” said Smith. “(Mycke) is a very good wrestler. I just started off and was ready to go.”

After winning the title, he cut the tie of coach Chad Dunn, which is a tradition at Eureka.

“I love cutting the ties. That’s the best feeling in the world,” said Smith, who hopes to cut another tie next year by joining the four-time state champion club.

Smith said he had arthroscopic surgery on his knee on Dec. 30.

“I had a lot of coaches and parents and my dad help me a lot,” he said of fighting back from surgery to win a state title. “I had a lot of help from a lot of people.”

Eureka’s Nathan Schmidt bested Forrest Fairbanks of Manhattan 9-4 for the 138-pound bracket. It was the senior’s first state title. He was second the previous two campaigns and fifth as a freshman.

“It’s amazing. I have been working for it my entire life,” he said. “To finally put it together my senior year is the best feeling in the world. I’m glad I was able to go out that way.”

Schmidt said the team was going to go out for hamburgers.

“I’m going to get the biggest one I can,” he said. “It’s always a tradition to see who can eat the most after state.”

Eureka had a third state champion in Hank Dunn at 152 pounds. Dunn downed Riley Forcella of Whitehall in 5:59.

Colstrip’s Rylin Burns scored his second straight title with a pin in 28 seconds over Callan Mears of Malta at 160 pounds. The junior said it was more satisfying than last year. During last year’s state championship match, Burns’ opponent, Trey Taylor of Circle, suffered an injury and defaulted out of the tourney.

“I just came out and wanted it,” Burns, who hoped to celebrate with a dinner of biscuits and gravy, said. “I was ready and wanted to be aggressive.

“This year I wanted it bad. Last year I didn’t have that feeling of actually winning. It felt so much better than last year. Last year, they rose my hand and I gave him a hug and this year I got to celebrate a little bit.”

Nathan Blodnick of Anaconda won a 2-0 decision against Gavin Nedens of Huntley Project for the 103-pound championship.

Blodnick, a freshman, has dreamed of winning a state title since he began wrestling at age four with the Little Copperheads Wrestling Club. He said it was the first time he wrestled Nedens.

“I just knew I had to go in and give everything I had and that’s what I did,” he said. “I knew he had a good double leg shot, so I knew I had to defend that. I thought I had a shot to win.”

Trae Thilmony of Thompson Falls won the 120-pound title with a pin in 5:20 against Tanner Cook of Columbus-Absarokee-Park City. Cook was a returning state champion.

Isaiah Allik of St. Ignatius-Charlo was the 170-pound titlist with a 5-4 win over Shepherd's Nate Gorham.

State B-C Wrestling: The heavyweight brawl for a team title will likely come down to the last round

Huntley Project and Glasgow are battling for the State B championship.