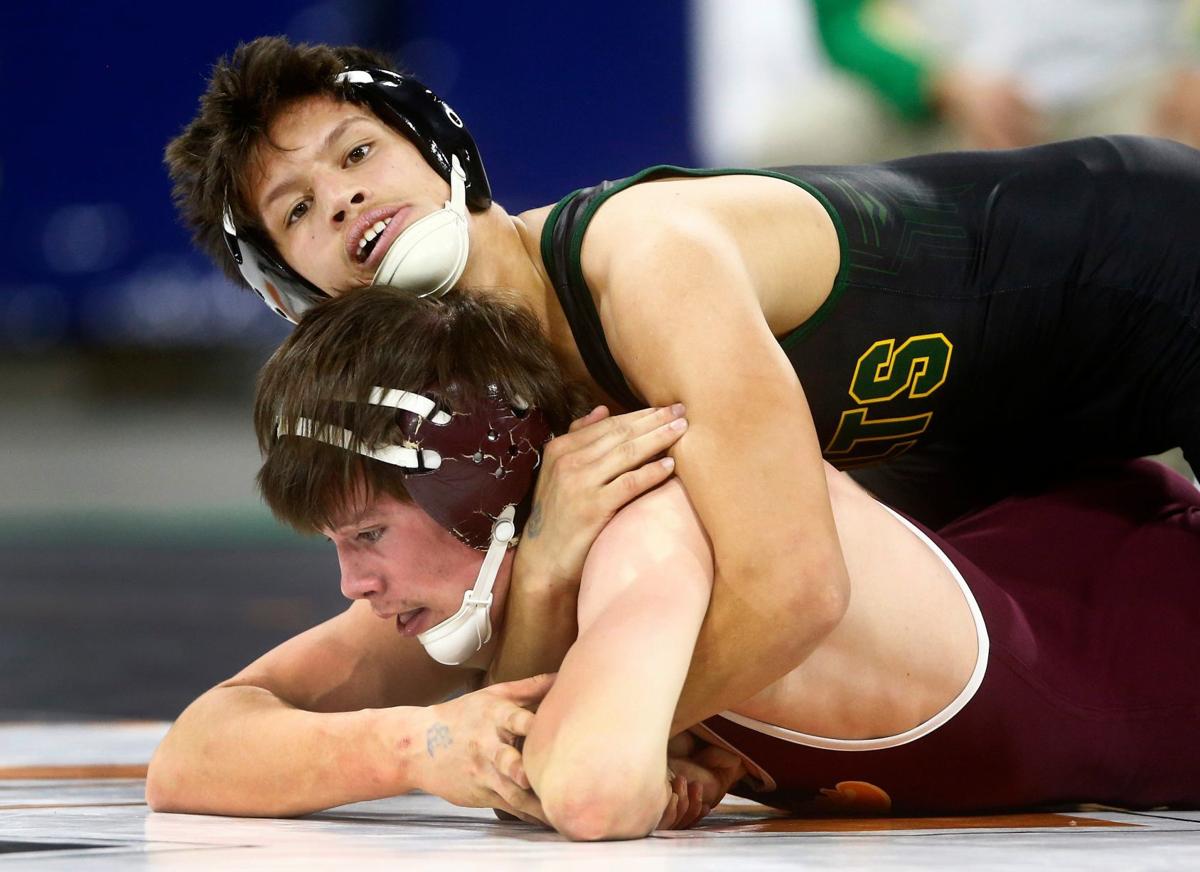 Colstrip's Jackson Currier ties up with Choteau's Pete Henderson in the Class B-C 138-pound match at the state wrestling tournament at Rimrock Auto Arena at MetraPark on Saturday. 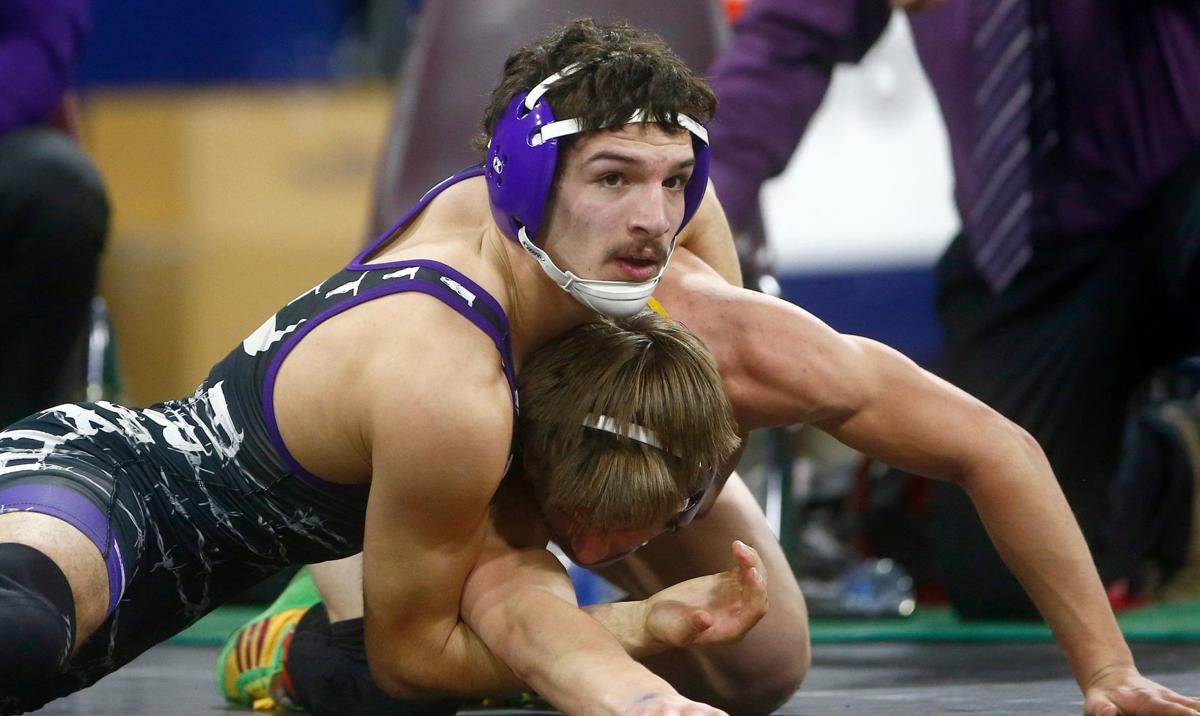 Forsyth's Michael Weber looks up as he wrestles Shelby's Wyatt Brusven in the Class B-C 152-pound championship match at the state wrestling tournament at Rimrock Auto Arena at MetraPark on Saturday. 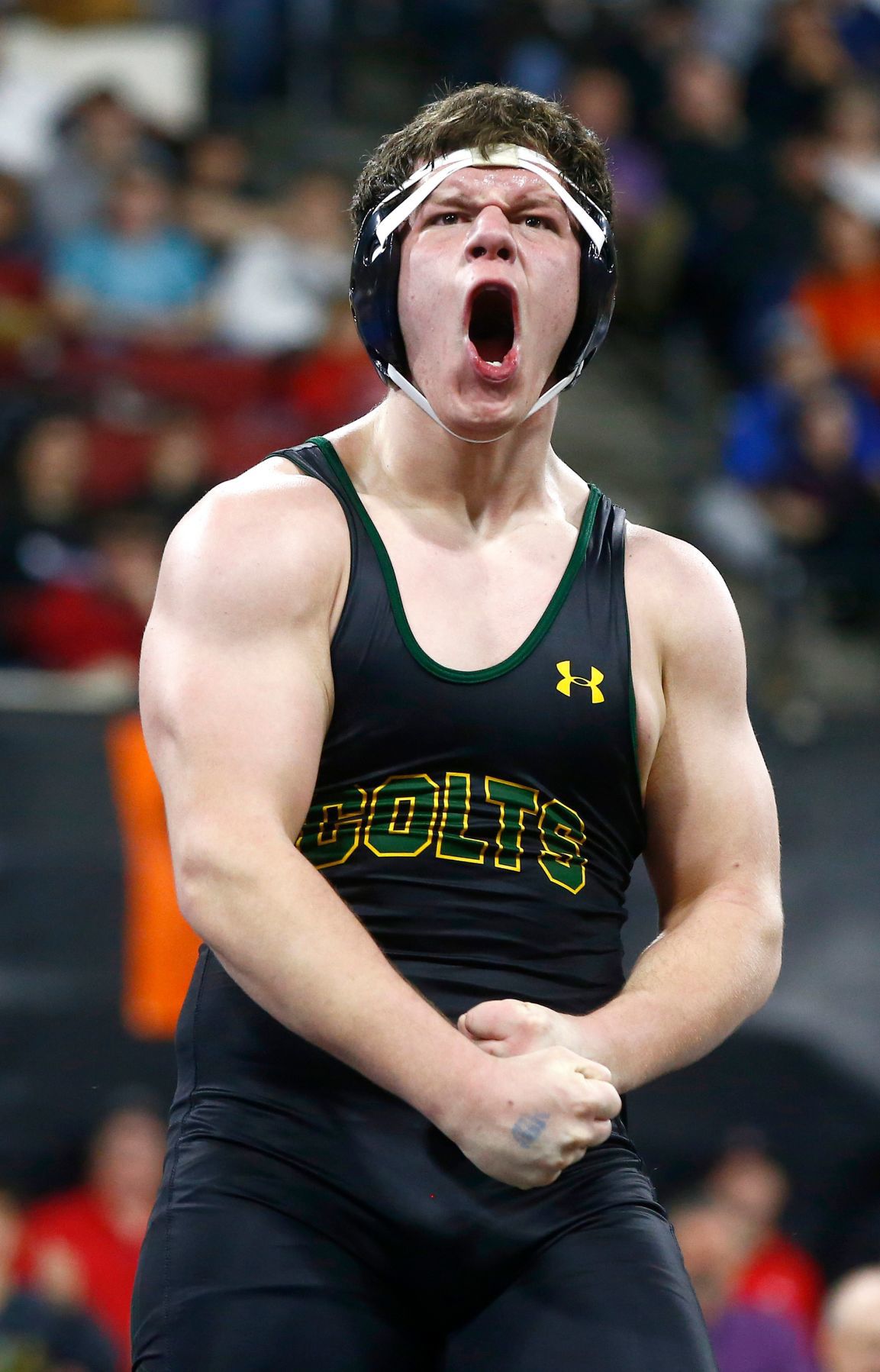 Colstrip's Jackson Currier ties up with Choteau's Pete Henderson in the Class B-C 138-pound match at the state wrestling tournament at Rimrock Auto Arena at MetraPark on Saturday.

Forsyth's Michael Weber looks up as he wrestles Shelby's Wyatt Brusven in the Class B-C 152-pound championship match at the state wrestling tournament at Rimrock Auto Arena at MetraPark on Saturday.

BILLINGS — Welcome to the club.

And while Currier and Weber had standout performances, so did the Colstrip Colts and Circle Wildcats. The Colts repeated as Class B champions and Circle won its second straight Class C title.

Photos: Championship round of the state wrestling tournament

Wrestlers compete in the championship round of the state wrestling tournament at Rimrock Auto Arena at MetraPark.

Currier is always smiling, and if at all possible, the smile was just a little bigger Saturday as he wrestled his way into the history books. When it was all said and done, Currier registered a 5-2 victory over Pete Henderson of Choteau to score his 138-pound championship.

At 5:49 p.m., the match ended and Currier's hand was raised by the referee with a loud ovation following. As Currier triumphantly exited the mat, Colts coach Dan Valdez rubbed his head and Colstrip assistant and Jackson's dad, Codey Currier, hugged him. Weber, and several of the Colts, also congratulated Currier.

"I worked really hard for this and to finally get it feels really good," Currier said. "To have so many people behind me feels great."

While he scored three quick pins in his first three matches, Currier will take a decision.

"I felt like I could have done more in my finals match, but a win is a win," he said.

"It's a family thing," he said. "It feels great to be part of that club with them."

Weber, who appeared poised and calm before the 152-pound championship tilt, also had plenty of support as his brother Nathan Weber, a two-time state champion at Forsyth now at Montana State-Northern, hugged him before the match. Weber scored a 14-6 major decision over Wyatt Brusven of Shelby to claim his title. At 6:12 p.m., he also received a standing ovation as his match ended and raised both hands with four fingers toward the crowd. As Weber left the mat, he was hugged by several well-wishers.

"It feels better than I could ever imagine," Weber said. "It hasn't sunk in at all and is inexplainable. When you work that hard for that long, it is something special. I'm lost for words for the first time in my life. I can't explain it. It's amazing.

"I've seen it before, but to actually experience it, it pales in comparison to experiencing it."

"At the end of the day, if you want to stand atop the podium, put the work in," Weber said. "The season doesn't end in February."

Colstrip wound up with nine state placers and put seven in the finals, a team record. Of the seven finalists, five Colts brought home championships, another new standard in Colstrip wrestling. Colstrip has won the Class B title four of the last six years.

"It's awesome, we broke that record," said Colstrip coach Dan Valdez, noting Colstrip's previous best for individual champions was four. "We wanted seven, of course, but we'll take five. It was fun."

Valdez said the Colts, who battled injuries all year but were top-ranked, knew that once they had their complete team they would be even harder to beat. The Colts finally were at full strength at divisionals and cruised to the Eastern B-C title.

"It's nice. These last two weekends, we've finally had our full team and been at full strength," Valdez said. "We've been wanting that all year and haven't been able to showcase that."

Bradley said the Colstrip team is tight-knit and plenty of Colts wrestle in the offseason.

"It's awesome, all that hard work pays off," he said. "It's unreal. I've been wrestling since I was four and most of the guys in the finals have, too. A lot of dedication pays off. A lot of offseason training helps. I'm proud of all of the boys, the whole team."

Siegel put off surgery to repair an ACL until after the season because he cared so much about this group of Colts.

"My decision to keep wrestling was about these guys," he said. "I did it for my boys. I love my guys and wanted to see them be successful and do well and not just me."

"It feels pretty great," Stormer said of joining his brother in the Wildcat record books. "It's amazing."

Said Stormer of the Wildcats' repeat: "It's crazy. That's pretty great. As a team, we came together and dominated."

Colstrip tallied 233 points and Glasgow was second with 130 and Columbus-Absarokee-Park City brought home the first team trophy in its history with 128. Huntley Project was fourth at 109 and Eureka fifth at 104.5.

Junior Tanner Cook (113) became the first champion in the 19-year history of the Columbus-Absarokee-Park City program.

"It's a great feeling," Cook said. "I feel like it's the start of a new era. We plan on having more in the future — individuals and a team title.

"It's very important. Someone had to do it. I'm glad to do it. If it wasn't me, it would have been someone else. We'll have a lot more champions in the near future."

Glasgow's Dylan Nieskens won by fall in 5:37 over Blaede. Nieskens said it was the rubber match in the series that was tied 1-1 between the two grapplers. Blaede had won a 9-5 decision over Nieskens for the divisional title.

"I trained hard and knew I couldn't quit and had to take it to him," Nieskens said, explaining he scored the pin as "I got in on a shot and took him to his back."

At 205 pounds, Florence-Carlton's Spencer Jones completed an undefeated 29-0 season with an 8-2 win over Petersen. Jones was a runner-up last year at 182 pounds.

"It's definitely an accomplishment," Jones said. "I've been working for it since the end of last year losing in the championship."

Jones said the setback last year, "drove me every day since the end of that match. I've been thinking about today the last 365 days."

The 6-foot-1 Jones is also a football player and plays middle linebacker. He has signed to play with Rocky Mountain College.

"It's a great town and has great people here," Jones said. "It's a football program that knows how to win."

Whitehall's Connor Johnson won the 132-pound crown with a pin of Nathan Schmidt of Eureka in 46 seconds in the championship match. Johnson was the quick-pin winner.

Get all our coverage from the 2019 all-class state wrestling tournament Feb. 8-9 at MetraPark in Billings.

BILLINGS — Another Weber will be a member of the North Dakota State wrestling team.