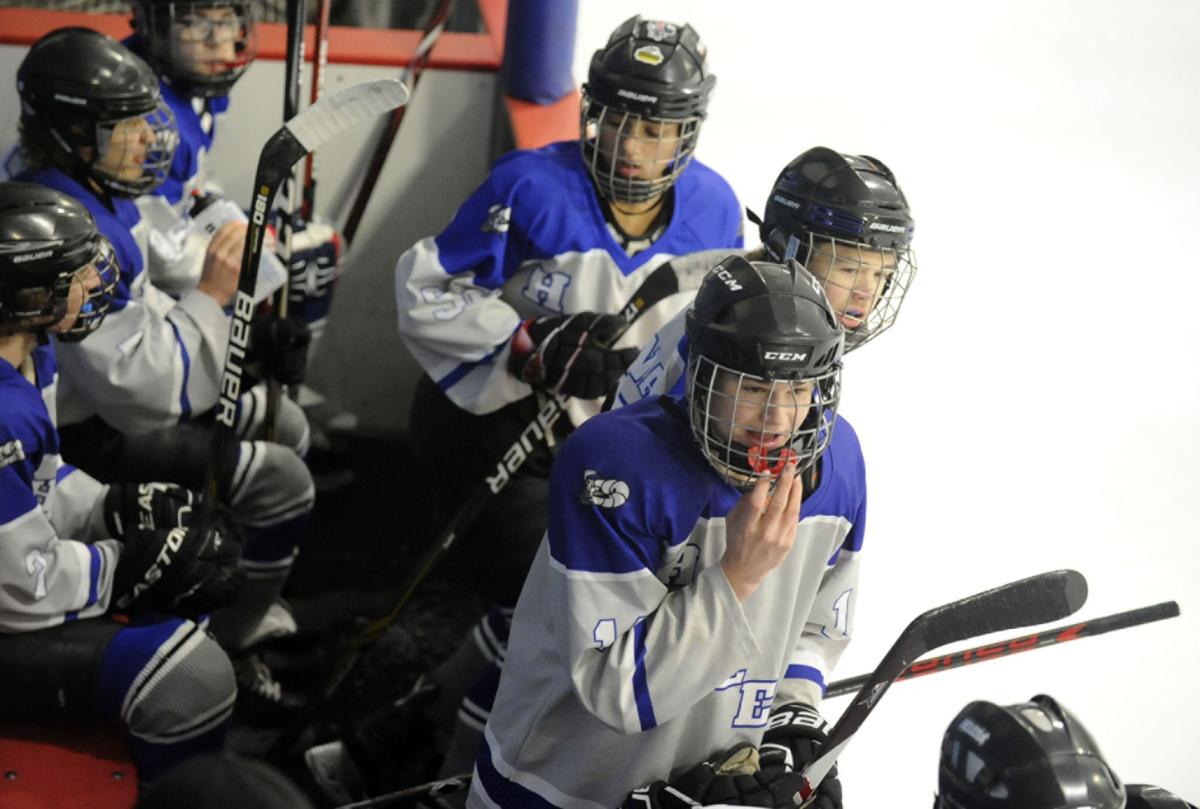 The Helena Bighorns high school hockey team looks on as they play a game against the Billings Bulls on Saturday morning at the Helena Ice Arena. The Bighorns high school 15 to 18-U is a team composed of area players of all ability levels looking to play hockey. Last year, the Bighorns captured a Montana Amateur Hockey Association Class B state title. 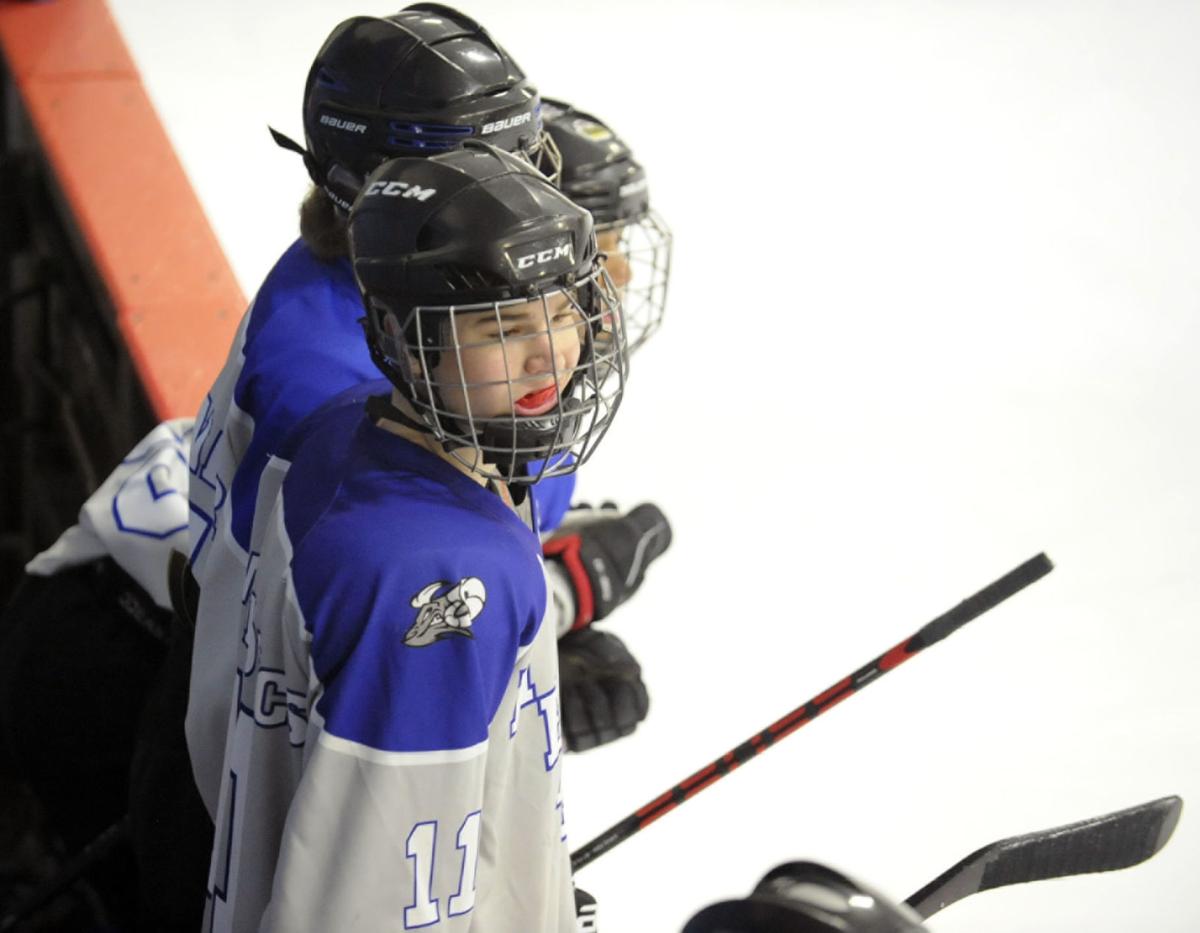 Helena Bighorns high school 15 to 18-U  hockey player Kyle Markovics looks on with his teammates as the Bighorns take on the Billings Bulls. The Bighorns are a team comprised of local Helena players who aspire to play hockey at the college level or the Helena Bighorns, a junior Tier III level hockey team. 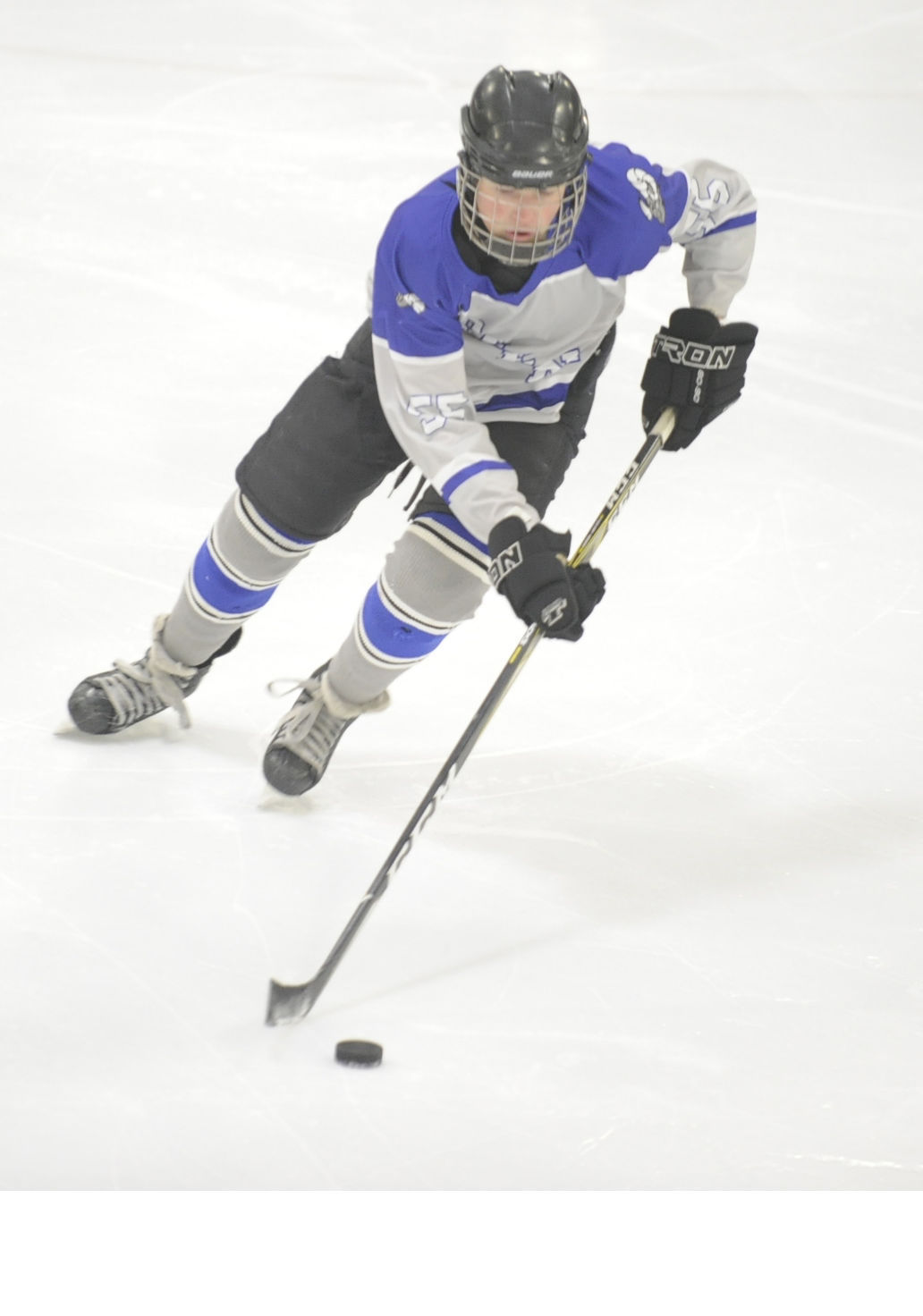 The Helena Bighorns high school hockey team looks on as they play a game against the Billings Bulls on Saturday morning at the Helena Ice Arena. The Bighorns high school 15 to 18-U is a team composed of area players of all ability levels looking to play hockey. Last year, the Bighorns captured a Montana Amateur Hockey Association Class B state title.

Helena Bighorns high school 15 to 18-U  hockey player Kyle Markovics looks on with his teammates as the Bighorns take on the Billings Bulls. The Bighorns are a team comprised of local Helena players who aspire to play hockey at the college level or the Helena Bighorns, a junior Tier III level hockey team.

HELENA — To Troy Green, the Helena Bighorns high school 15 to 18-U team is significantly more than just a school hockey team that shares a name with their Tier III Junior A team.

The 15 to 18-U Bighorns Hockey team, which draws in local area players from Helena, means everything to Green, who is a full-time medical support assistant at Fort Harrison. He also devotes a full-time workload to enhance a group of hockey players whose abilities vary from beginner to advanced.

"Coaching it gives me a sense of purpose, and it is my other full-time job away from my full-time job," Green said.

After Green ended his career as a member of the Bighorns 15 to 18U hockey team, he found a way to stay close to the sport transitioning from player to coach.

Green estimates he has now devoted more than 20 years as a player and coach to the Bighorns organization, whose governing body is sanctioned through USA Hockey, the Helena Youth Hockey Association and the Montana Amateur Hockey Association.

"It's everything to me," Green said. "From the time I graduated high school, (the Bighorns) have been a part of my life for 20-plus years, and being a part of this team is a feeling that you get nowhere else. It's companionship and brotherhood, and that is something that we want to instill in these guys because it is their family away from their family."

Green has expanded his love of hockey to his own family, who also participates in the sport.

"It's not just me (participating) in hockey," Green said. "My entire family and my kids recognize the logo, and they hang out with the team. I even coached my daughter and some of the guys that are with the high school. I remember when they were just kids and learning to skate."

The time commitment Green, the players, the coaches and the board commit to is huge. Cherie Curry, whose son Cole Curry currently plays in Billings, knows the season is long. From October until the state tournament in February and March, she and Cole are on the road.

"I would say we travel 10,000 miles easily," said Curry, who works her job as a full-time CPA during tax season while simultaneously traveling to road games with her son.

Cole Curry, who used to play goalie in Helena for the Bantam while playing for the Billings Pee Wee team, doesn't miss many games.

Check out a video interview with players on the Helena Bighorns high school team. https://t.co/KEConnb7LJ via @YouTube

"It's crazy balancing out that schedule," Cherie said. "During my busy season as a CPA, I work 60 to 80 hours a week, and I still go to all of the games (home and away)."

The majority of the Bighorns hockey players play for the love of the sport, but a few, according to Sarah Garcia, the Big Horns Board Representative and treasurer, even have a chance to play hockey at the college level, and some have joined the Tier III Junior A team.

"The sport has grown in the last decade, and there are over 200 registered kids," Garcia said. "That is a pretty good-size program. We even had a house league program for the 10-U and 12-U kids who don't want to travel or get some experience before they transitioned into travel leagues."

Helena resident Ryan Funes started his hockey career as a goalie with no prior experience.

Funes, who learned how to skate with a pair rental skates and a pieced together uniform of borrowed equipment, eventually overcame those obstacles of inferior equipment to becoming the Bighorns high school team's star goalie.

Funes, who also played lacrosse in a club league, had no prior experience as a goalie.

"It was crazy the first time I went in as a goalie," Funes recalled. "There was a lot of pressure on me. I like the pressure, and it drove me to do better."

Funes eventually developed under the tutelage of his coaching staff, whose work would subsequently turn into capturing a Class B state championship last year.

Trent Sobek, another Bighorn coach, said Funes was one of the main contributors to the state championship title.

"Funes found a zone in his rookie year of playing hockey," Sobek said. "He just played incredibly well. Halfway through the season, we were fairly confident in Funes and put him into the net. He thrives under pressure, and that is what you need in a goalie at the high school level."

Sobek, who played hockey at the NCAA Division III level as a member of the University of Wisconsin-Eau Claire, helps his players through his experiences.

While playing at Eau-Claire, Sobek had a chance to play with teammates who were getting tryouts with NHL teams. Now he brings that experience to the Bighorns.

"It's great to come to a level like this, because we can run systems that other teams around here have never seen before," Sobek said. "We run our basic and power play run that no one has ever seen and has no idea how to stop it."

Sobek enjoys working and watching kids grow through the sport at the recreation level and balances his full-time job as a sterile processing technician at St Pete's Health.

"Just watching someone like Blake Nichols develop from an immature freshman to a young adult is awesome," Sobek said. "Now that they are the adult level, we treat them like adults."

Blake Nichols, who has played for 12 years, stated this team is everything to him.

Nichols, who became a captain during his sophomore year said he experience exponential growth and has a great memory of capturing the championship trophy.

"During my sophomore year I grew as a person and a leader," Nichols said. "We won last year but probably shouldn't have because we weren't a great team. We struggled all year but pulled it out at state. I've won a championship when I was very young, but it was cool to win a state title."

The experience of winning is a memory Nichols said he would carry with him the rest of his life as a member of the Bighorns.