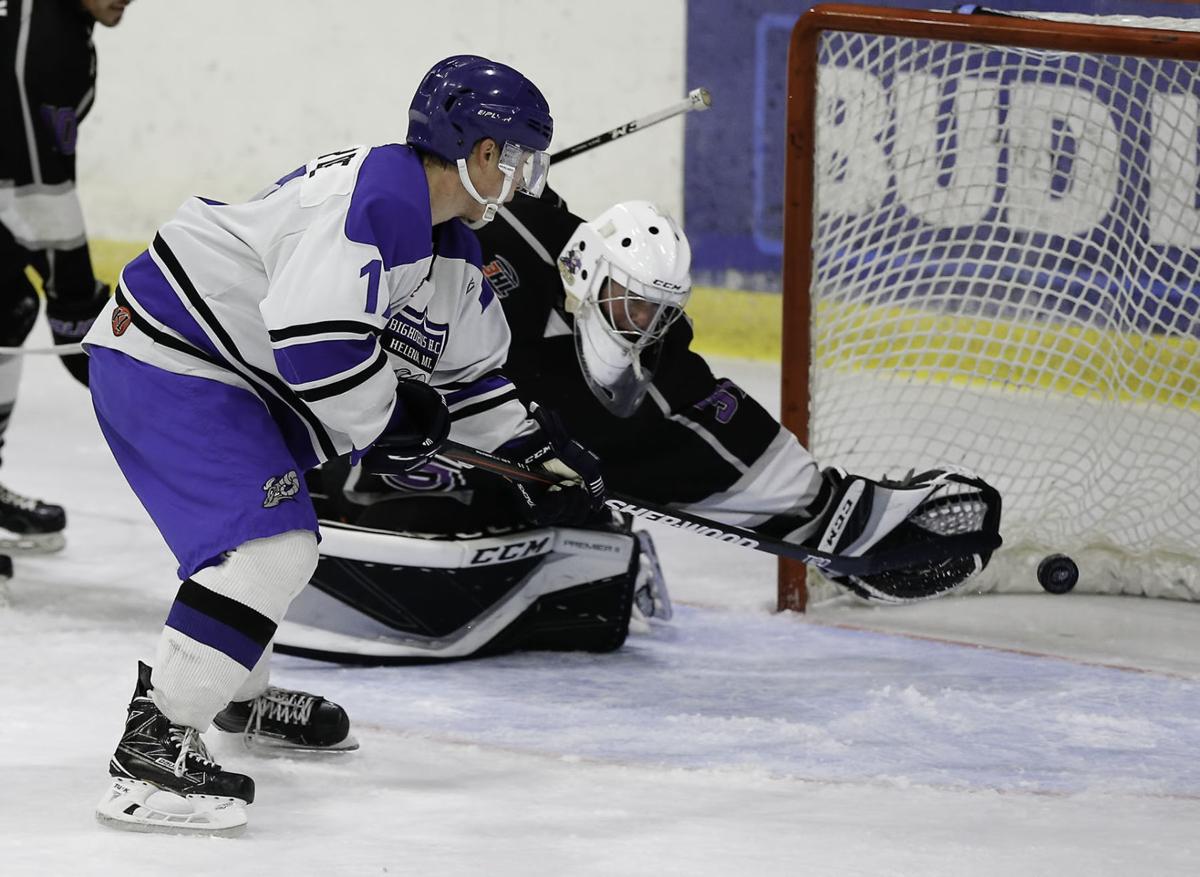 Bighorns Elliot Plourde makes it look easy with a tip behind the Gillette goalie during a recent game in Helena. 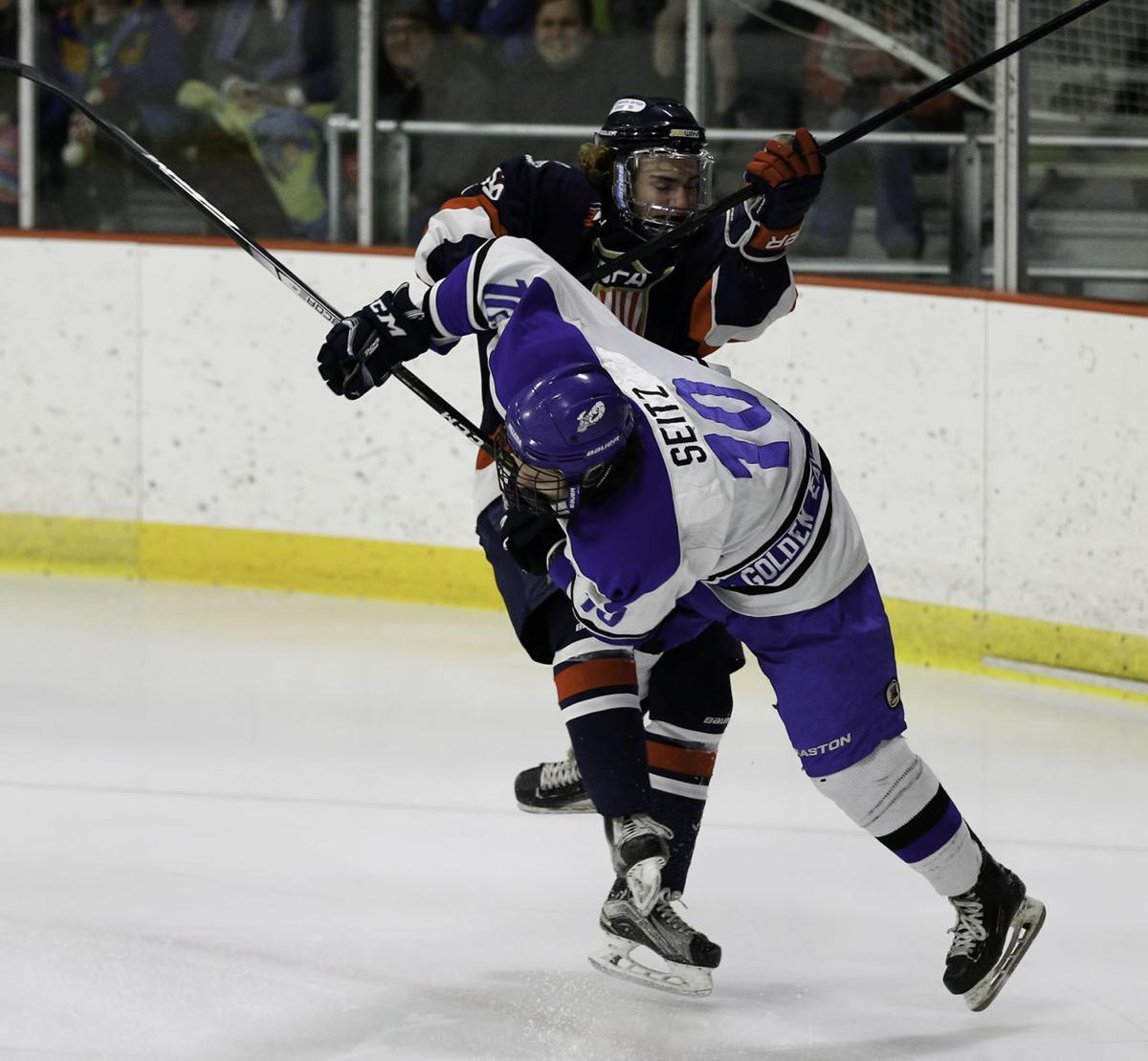 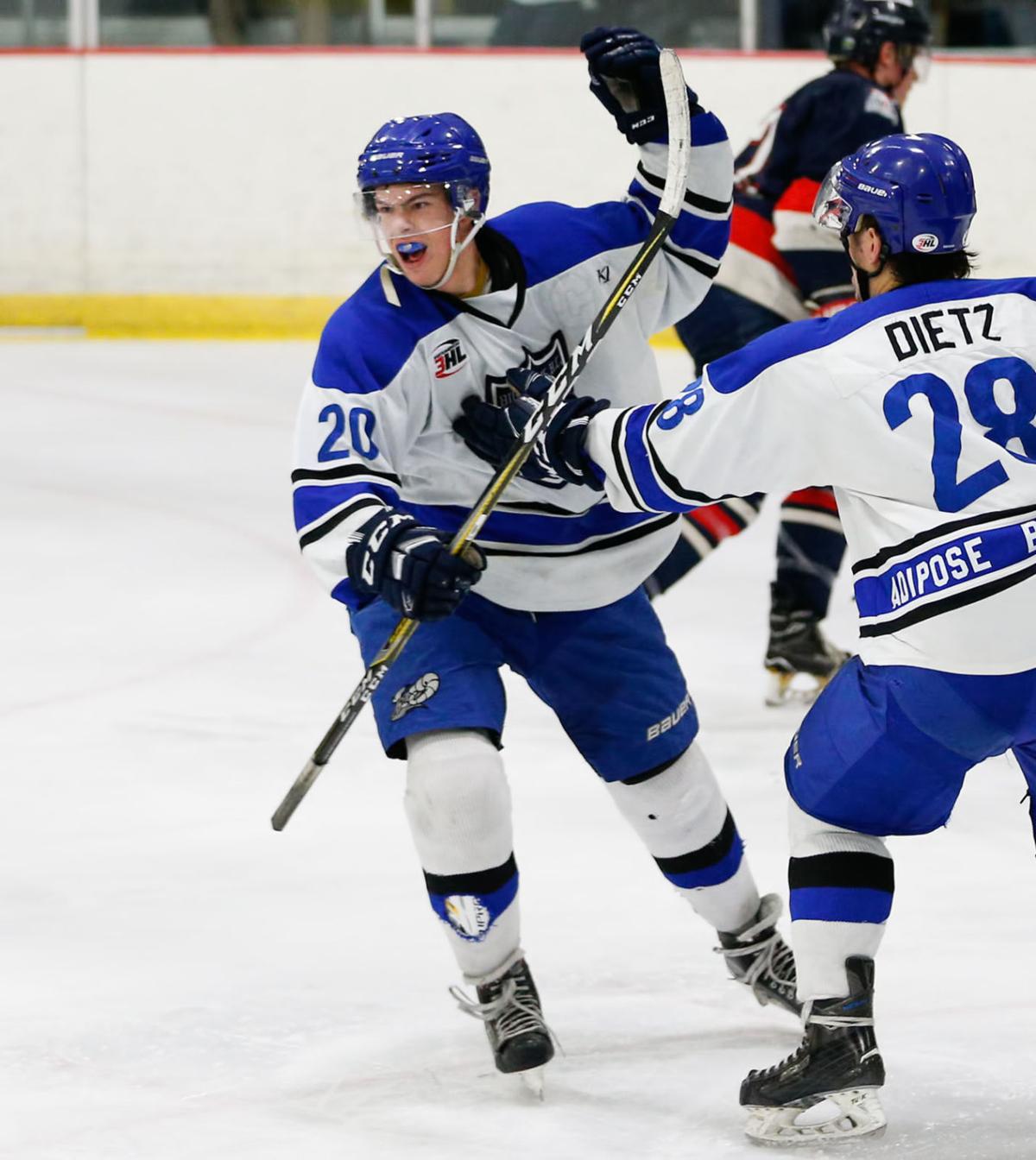 Helena Bighorns Luc Cross celebrates after scoring a goal in the third period of a recent game against Great Falls. 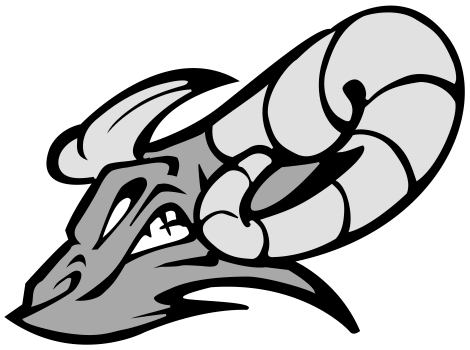 Bighorns Elliot Plourde makes it look easy with a tip behind the Gillette goalie during a recent game in Helena.

Helena Bighorns Luc Cross celebrates after scoring a goal in the third period of a recent game against Great Falls.

Now in his third season, he has his team atop the NA3HL Frontier Division with 26 wins and has only lost twice all year.

But he knows his job is more than just standing behind the bench and configuring line changes.

His team will change year by year as amateur hockey players look to gain exposure for college programs and join better leagues. He knows he can’t put the puck in the back of the net for his players, but he can give them every opportunity to succeed.

Richards played both NCAA Division I and Division III hockey, and also advanced to play Tier II hockey with the former local Helena Ice Pirates, so he has traveled both paths his players are looking to take.

“We work hard to market our kids to colleges or to higher up North American teams,” Richards said. “It not only helps them, but it helps us because we use it as a recruiting tool. We have seen successful kids move on. If you play here, you can move up, too.”

The Bighorns are just one of the 36 teams in the North American Tier III Junior Hockey League. The mission is to serve as one of the top training grounds by providing coaching, exposure and development for young hockey players from the ages of 16 to 20.

“Junior hockey is a classification and a level unto itself, much like college hockey,” Richards said. “There are three tiers in the United States. Tier I would be the best, followed by Tier II and Tier III.”

While the top two classifications have the ability to see future NHL draft picks, the top tier will see the most. Richards said 99 percent of the tier one hockey players eventually end up playing for Division I colleges. On tier two teams, probably 80 percent will go Division I, while some will also headed to Division III schools.

With the Bighorns landing in Tier III , they are strictly a developmental league with players either looking to play in college or at the higher tier levels.

The only difference is that they are not receiving a paycheck. They are the ones actually paying to follow the path to college with a hockey stick in their hand.

Each player must pay $6,500 a season to participate and is given a host family to live with. Food, transportation and hockey gear is not provided.

Since Richards arrived following the 2015-16 season, many players have come through and put on the Bighorns jersey.

He makes sure to get on his cell phone to find the best players possible.

“Hockey is a business, so there are plenty of showcases during the summer,” Richards said. “The NA3HL is also a family, so we also can talk to the North American Prospect Hockey League below us who all have kids under 18. They throw events on as well.”

According to MaxPreps.com, a high school sports website run by CBS Sports Digital, only 11 out of the 50 states have organized high school varsity hockey teams, so others who are looking to play might need to leave their hometown.

Elliot Plourde grew up in Seattle and was raised by parents who loved hockey. After a successful youth hockey career, he joined the Spokane Braves, a member of the Canadian Kootenai International Junior Hockey League prior to his arrival in Helena.

“The team was a little weaker than expected, so I got a lot more playing time than I probably should have had,” Plourde said. “It helped me become better because I was exposed to a high level of hockey.”

With two seasons under his belt, Plourde tried to move up to a couple of Tier II teams in Manitoba but, after just 10 games, he returned back to Spokane.

“It’s not always easy,” Plourde said. “I was 19, I was an import and I just couldn’t score. I knew it was going to be challenging, but I just couldn’t perform at the level I wanted to. It was a different type of hockey. It was more physical and they were better players overall.”

Now as a member of the Bighorns, Plourde is once again flourishing, leading the team in points and ranked seventh in the NA3HL in goals.

Even though his friends stayed and took the traditional route by attending classes at Mt. Rainier High on Monday through Friday, Plourde doesn’t mind taking his education on the road.

“I played my junior and senior years in Spokane and I was a pretty good student, but it gets tough.” Plourde said. “You have to study on bus trips and turn on those little lights above your seat and start writing.”

His next step will take him to college. He has received many Division I offers including Niagara University, Iowa State, Utah State and the University of Providence in Great Falls, but he has yet to make a decision about where he would like to go.

Plourde might be looking forward to college, but some of the younger Bighorn players are looking to move up to tier two teams.

Forward Hayden Seitz is 18 years old and has spent two seasons in Helena and accumulated 33 career goals. Now as the team prepares to travel to Blaine, Minnesota to play in the NA3HL showcase, he knows scouts for higher tier teams will be sitting and watching his every move on the ice.

Luckily for Seitz, this isn’t his first showcase and knows what to expect when the scouts approach him.

Most high school athletes who play football, basketball and baseball don’t have to go far. They attend their local high school, play against their friends and the scouts come to them.

But hockey is a whole different game.

It’s not uncommon for a junior hockey player to travel to multiple cities and even out of the country to get recognized.

The love of the game keeps them going. No matter where they start their career, they might not think of Montana but one of their stops might take them right here in Helena.

“It was a surprise, but this is my last year, so here I am,” Plourde said.