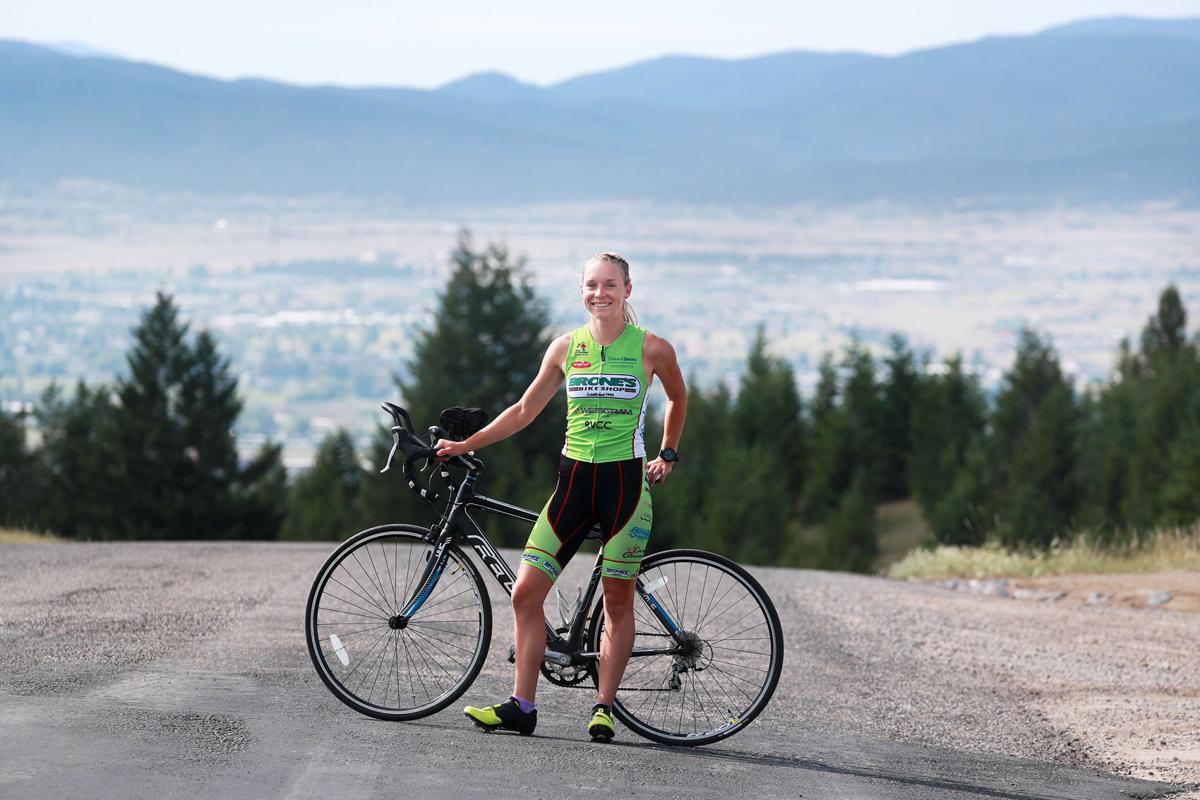 Anna Rogahn is photographed with her bicycle on Oro Fino Gulch Road on Friday morning. The Butte triathlete recently won the Bozeman Tri. 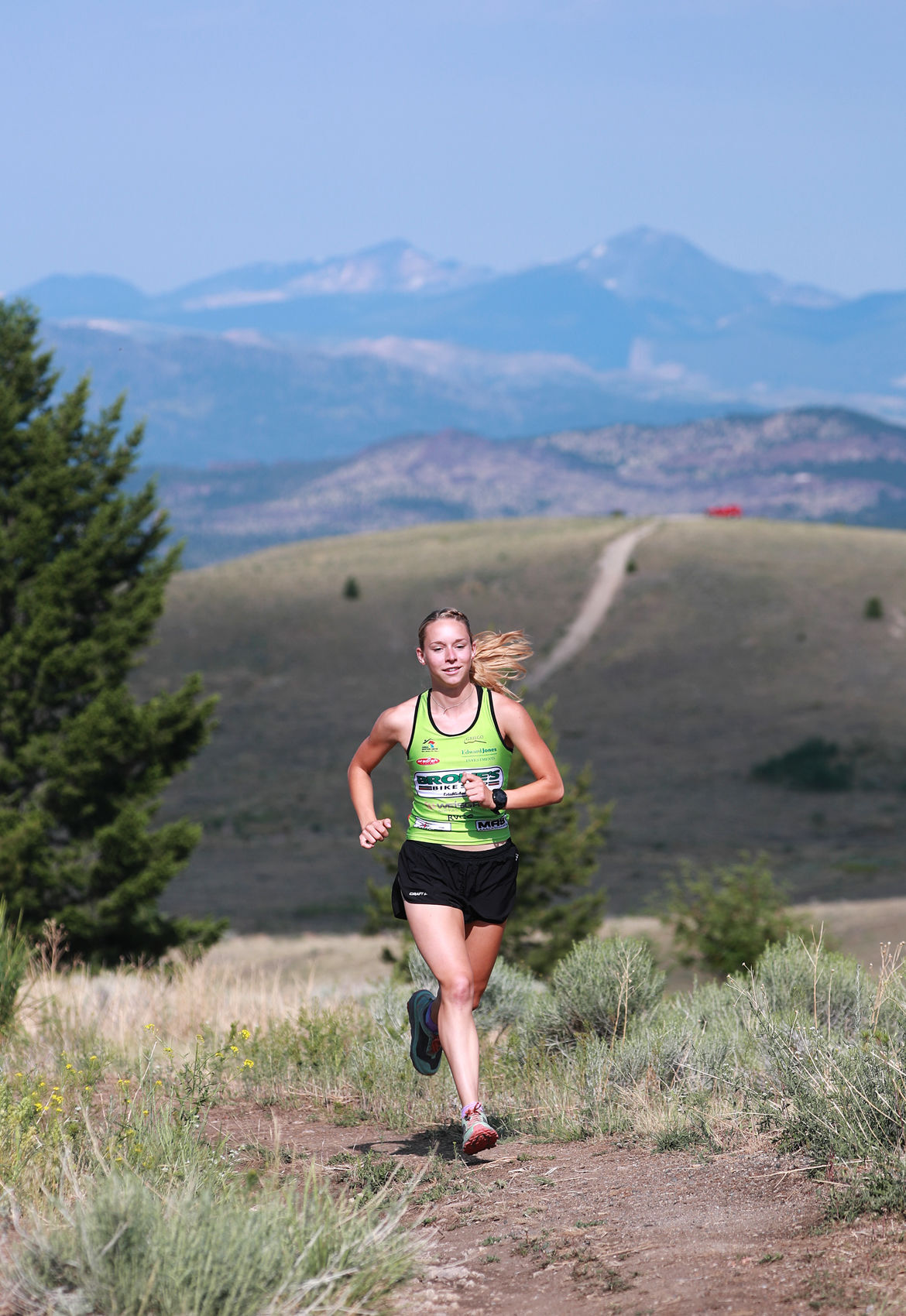 Anna Rogahn runs along one of the trails at the Big M.

Anna Rogahn is photographed with her bicycle on Oro Fino Gulch Road on Friday morning. The Butte triathlete recently won the Bozeman Tri.

Anna Rogahn runs along one of the trails at the Big M.

BUTTE — As it turns out, Anna Rogahn is pretty good at triathlons.

With a victory under her belt, she is now more motivated than ever to see where the sport can take her.

“I wasn't going to let the Bozeman Triathlon define my future,” Rogahn says. “My last two months of training hasn't been ideal.

“I have been in 10 different states. I've skipped a whole bunch of days of training. Going into it, my original goals, I kind of lost sight of. But since it did go well, it just kind of left that door open.”

If all goes according to plan, Rogahn’s next triathlon will be in Coeur d’Alene, Idaho, on Aug. 7.

“I would say I'm more excited now, than I was even going into the race, because now I get to sit down and plan when my next race is,” she adds.

It might be a tad fallacious to believe that any athlete is a natural when it comes to competing in a race comprised of a 0.93-mile (1.5K) swim, 24.8-mile (40K) bike ride and a 6.2-mile (10K) run. But there were people in Rogahn’s life who saw potential, even before her impressive victory in Bozeman.

“Well, my first coach at (Winona State University) kind of put the thought in my head that, ‘Oh, hey, post-college, you should maybe do this,’” she remembers. “Because if I'm going to be unique at something, I'm a decent runner, but I'm not good enough to go win the Olympics or anything, but I have a decent swim background. I have the running background and there's always room to grow.”

Before moving to Butte just over a year ago, the Wisconsin-born distance-runner-turned-triathlete attended Winona State University in Minnesota, where she was recruited to run track and cross-country.

“So, once he kind of put that thought in my head, I was always cross training, too,” says Rogahn. “My body just doesn't handle 50, 60, 70 miles a week. I would be in the pool once a week or on the bike a couple days.”

She was also a multi-sport athlete growing up; a jack of all trades, you might say.

“Throughout middle school, I was always cross country, basketball, track and then same thing throughout high school,” Rogahn says. “And then when I was hurt during cross-country or track in high school, I was swimming with the swim team. I was on a swim team growing up, just for a couple of years. So, that's where I learned my basics, but I've always kind of just been a natural swimmer. So, I always have implemented those disciplines. I just never got to utilize it in the form of a triathlon.”

Inspiration can come from unexpected people at unexpected times for athletes. The next boost in Rogahn’s triathlon career came when she stepped foot inside Brone’s Bike shop in Fountain City, Wisconsin. The store doubles as a coffee shop, and that’s where Rogahn met Mark Brone.

“You sometimes find those people that just believe in trying to support you,” she says. “They're not waiting for you to reach a certain status before they believe in you. He actually gave me my first race bike.”

In addition to the bicycle, Brone also gave Rogahn a race kit, which she sported while taking first in Bozeman.

“He's incredible. And just having those people that aren't waiting for you to reach that certain status, I don't have to be an Olympian for him to just give me a bike and a race kit,” she says. “He was willing, right then and there to believe in me. So, that was kind of my first initial step.”

With the victory under her belt, Rogahn has already started planning for her next race on Aug. 7. She says these days, with the race high still fresh, are going to be easy and fun. The grind comes when the bliss inevitably wears off.

“I know there's going to be a day where I'm just like, ‘Eh, we'll see,’” she says. “But right now, definitely pretty motivated about the future and where this sport can kind of take me.”

Paired with motivation, a ramped-up training regimen will require discipline. It’s human nature to gravitate to our comfort zone, which in Rogahn’s case is running. Between now and Aug. 7, a lot of her training will be geared toward improving on the bicycle.

“There's a lot more that I need to do on the bike,” she says. “So, my next phase is just going to be focusing on bike strength. And while I love to run and I would do it every single day if I could, that's my strongest of the three disciplines. So, I need to kind of just hunker down and really ground myself on the bike for the next eight weeks or however long it is, and just get stronger in that aspect.”

While there is a lot of work that needs to be done, it will come with trial and error. Rogahn acknowledges that she’s still new to the sport and it could take some time to hammer out a consistent routine.

“That's the beauty of the sport, is that I've got time and I just need to embrace it,” she says. “There is going to be some things along the way, that put a hitch in whatever.”

Being new to a sport doesn’t always lead to unpleasant surprises. Even as a seasoned distance runner, Rogahn still managed to impress herself while competing in Bozeman.

“The bike portion was not super flat, but it was still fun,” she explains. “I mean, even at altitude, I had a massive PR in the 10K at altitude on a trail. I got done and was like, ‘How the hell did that just happen after a 1,500-meter swim and a 40K bike? This is ridiculous.’”

Along with a surprising personal best in the 10K, Rogahn says that the atmosphere along the course in Bozeman was especially fun and positive.

“The spectators … there was this dude just sitting on the corner,” she remembers. “Every time you saw him, he... I don't think I've smiled that much during a race. He was the best type person ever. I didn't even know him, but he would just yell at you and be like, ‘Up! Up! Up!’”

In addition to the random enthusiastic hero, Rogahn’s dad was also in attendance on June 20, Father’s Day.

Rogahn says that she’s made a comfortable foundation for her life in Butte. She also likes training at altitude across the Mining City’s hilly landscape, which probably gave her at least a slight edge in Bozeman.

Winning the Bozeman Tri didn’t just open her eyes to what she’s capable of within the sport; it also allowed her to level up in competition down the road.

“I still have so much to learn about the sport, too,” Rogahn says. “From winning the Bozeman Triathlon, it was the Montana State Championship. So, from my understanding, I've qualified for age group nationals, which is held in Milwaukee, but I wouldn't be able to do that until 2022.”

And if she continues ramping up her competition, intensity, training and success?

“I mean, 2024 Olympics … that would be pretty sick,” Rogahn says. “But I mean, even after that, Paris, LA, whichever one it is, I still have so much time and so much more to do here.”