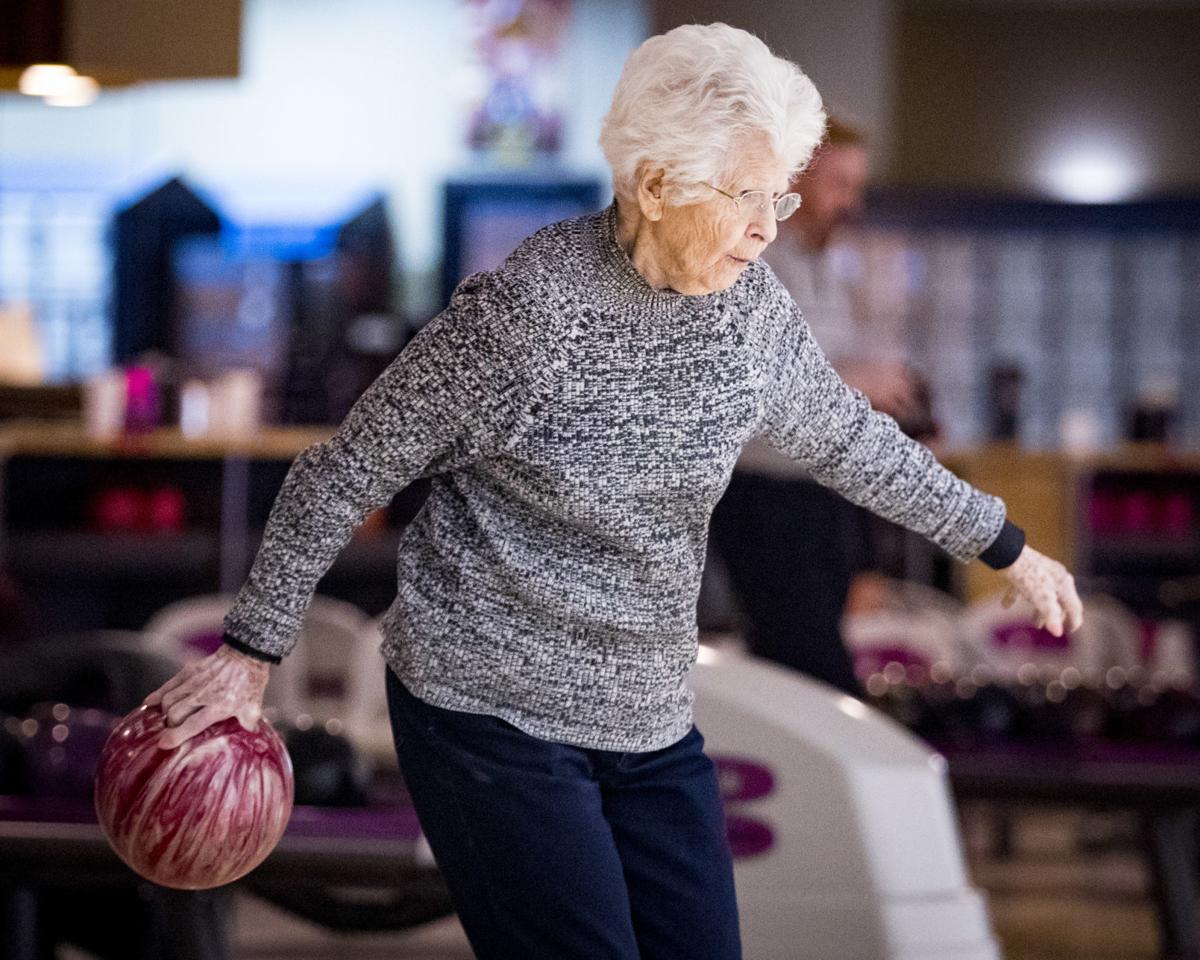 Alice Frank of Billings bowls during the Jubilee Seniors league at Fireside Lanes on Wednesday. Frank will turn 100 on Friday. 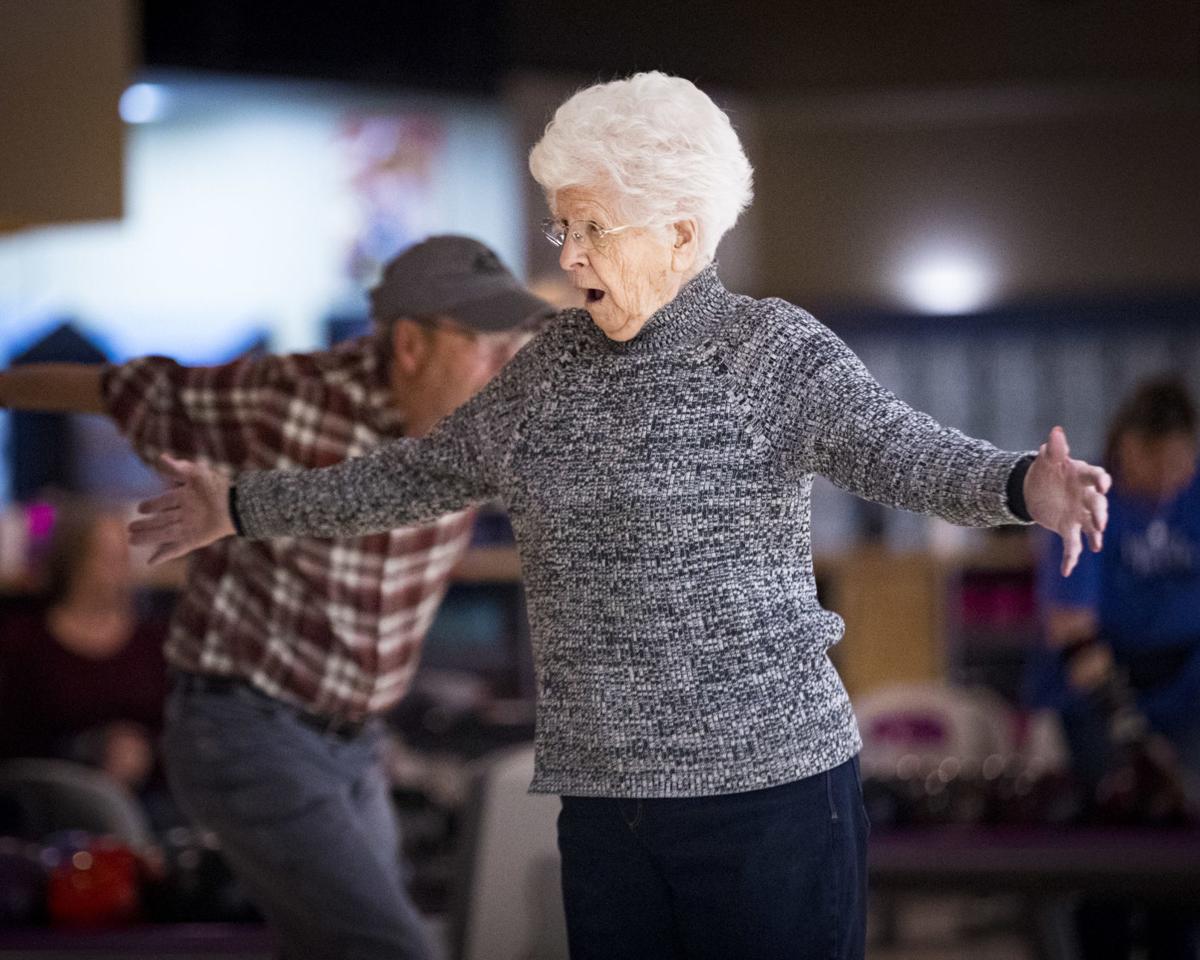 Alice Frank reacts after getting her second strike in a row during the Jubilee Seniors bowling league at Fireside Lanes on Wednesday.

Alice Frank of Billings bowls during the Jubilee Seniors league at Fireside Lanes on Wednesday. Frank will turn 100 on Friday.

Alice Frank reacts after getting her second strike in a row during the Jubilee Seniors bowling league at Fireside Lanes on Wednesday.

BILLINGS — When Alice Frank opened her final game Wednesday afternoon in the Jubilee Seniors league by rolling three consecutive strikes, she turned to her fellow bowlers at Fireside Lanes with a shocked look on her face and threw her arms up in disbelief.

Applause burst out up and down the lanes. There were also shouts of "Way to go, Alice."

The soon-to-be centenarian from Billings, who will turn 100 on Valentine's Day, celebrated in advance with a birthday bash that included cake, roses, camaraderie and her top game of the season, a remarkable 188.

"I haven't done that for many years," Frank said of stringing three strikes together. "It felt good. Kind of surprising, too."

While partying, playing poker and bowling with family and friends, the white-haired, diminutive right-hander also displayed quite a knack for picking up spares on her way to games of 126, 130 and 188 for a 444 scratch series.

In the end, one bowler after another gave her a hug, a high-five, or shook her hand. "That is awesome, kid," said one. "Great job, Alice. I wish I could bowl like that," commented another.

"She definitely looks like she can't be 100," league secretary Marilyn Harmon said. "She strikes me as being in her 70s. She just keeps going."

Frank, who has been bowling in Billings for 15 years, was competing alongside her daughters, Sandi Olson, 68, and Iris Weisgerber, 73, and Sandi's husband, Steve Olson, 68, on the R-Team in a league for men and women age 55-and-over.

They've been bowling together for four years.

"I was a little nervous, with everybody watching me," Frank said of all the birthday hoopla. "I am not used to being the center of attention. That's a bit unusual, but it seems like everybody was rooting for me, too."

According to records compiled by the United States Bowling Congress (USBC), three women nationwide are known to have competed in leagues at age 103.

Frank, armed with her pink and white 12-pound Ebonite ball, is believed to be the oldest league bowler in the state again this season.

"It's amazing," her son-in-law Steve said. "It would be like Bart Starr, Phil Simms or Terry Bradshaw playing football in their 80s. It's unbelievable."

Frank, born on Feb. 14, 1920 in Fremont, Nebraska, goes bowling about six hours a week, participating in 30-week leagues on Mondays and Wednesdays at Fireside.

She still lives independently and is also well-respected when it comes to baking apple and lemon meringue pies and oil painting.

"To me, she's got a real good temperament for bowling," league member Archie Cavaveau, 75, said. "You never see her get mad at leaving a 10-pin. I think a lot of bowlers should follow her attitude."

Frank has been pursuing the sport since she began bowling in Joliet with her late husband, Phillip, during the mid 1960s.

"I don't feel any different than when I was in my 80s," she said. "A little slower maybe. I enjoy just getting out and bowling. It helps that my kids are backing me up all the time. I don't drive anymore, so they have to take me every place I want to go."

Last season Frank shocked her fellow Jubilee Seniors bowlers by fashioning a 194 game, which was a staggering 74 pins above her then 120 average.

"There have been a couple times this year where she has blown everybody out of the water," Harmon said. "She gets up there, and her ball is so slow you think it's going to go into the gutter, but she ends up with a strike.

"It just amazes me."

With her milestone birthday approaching it has been one party or celebration after another this week for Frank. It started on Sunday with a gathering at the First Congregational Church in Laurel.

"Quite a few bowling people showed up," Steve Olson said. "This is her second family."

With her very deliberate, four-step approach and slow-rolling, straight ball, Frank, who has five children, 10 grandchildren and 16 great-grandchildren, did other wondrous things Wednesday besides her three straight strikes.

She closed out her second game with three consecutive spares, along with a strike in the 10th frame.

"When you pick up your spares you can get a pretty good game,' Frank said. "That helped me more than anything."

She finished with a 777 series, including handicap. Her previous high game this season in Jubilee Seniors was 148.

"She is having a great time," Harmon said. "I've seen more smiles on her face this week than I've seen in years."

Frank, who fell at home a couple of times this fall and was sidelined for several weeks with a sore right knee, said she has enjoyed herself on the lanes as birthday No. 100 approaches and is ready to bowl at 101 next year.

BILLINGS — Alice Frank is already thinking about bowling next year when she reaches 100 years old.