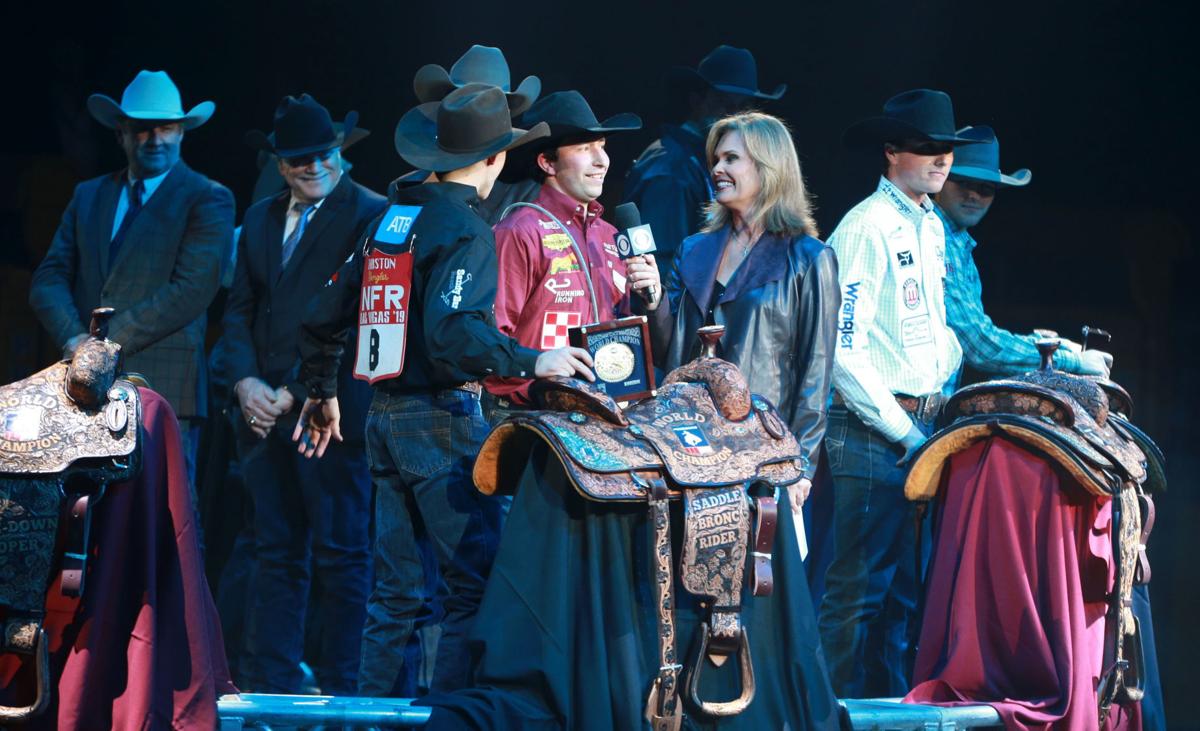 Haven Meged of Miles City gets his saddle for winning the tie-down roping at the National Finals Rodeo last week. Meged won the average for 10 nights at the NFR and also was crowned world champion. 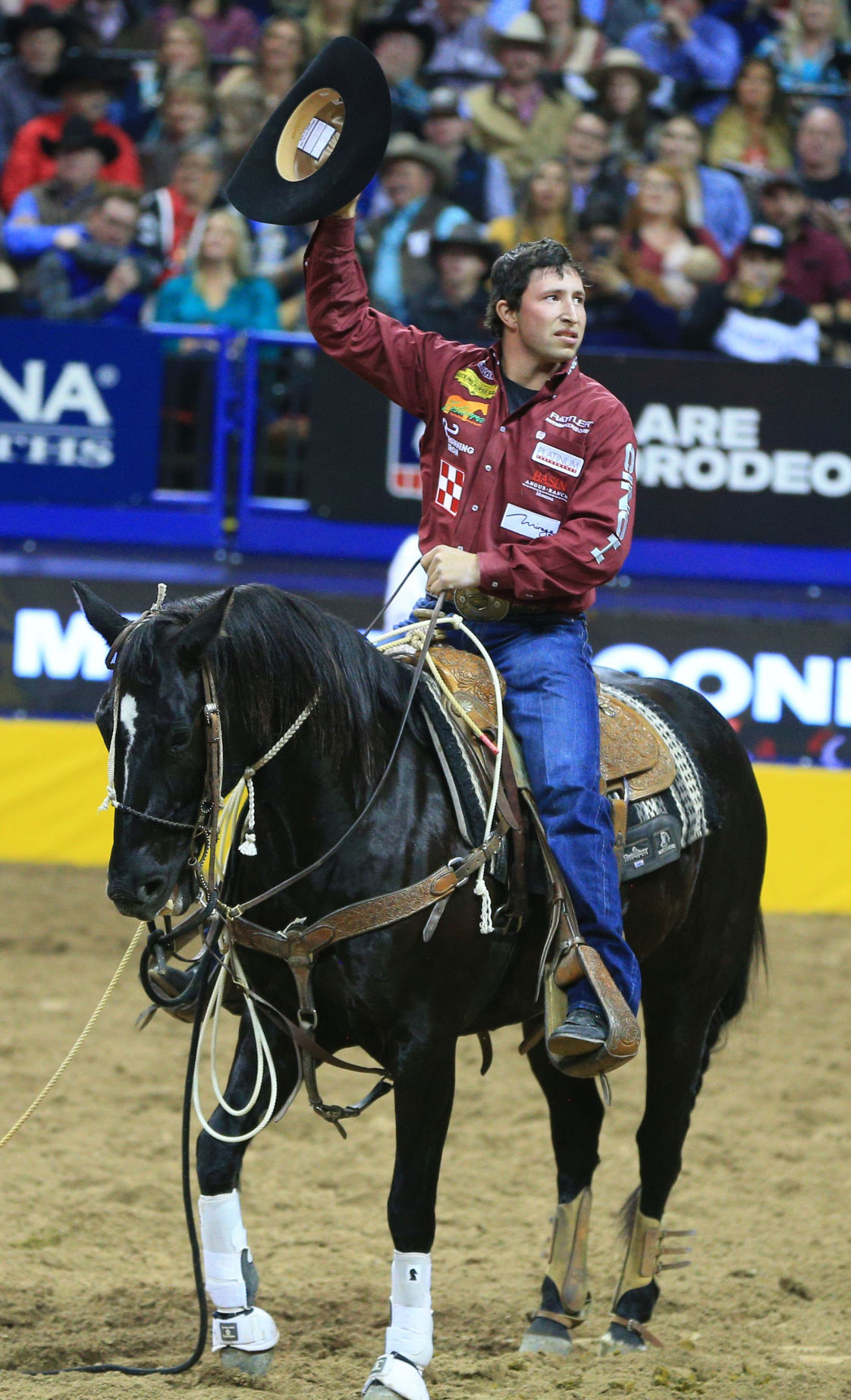 Haven Meged salutes the crowd during his victory lap this past Saturday at the National Finals Rodeo.

Haven Meged of Miles City gets his saddle for winning the tie-down roping at the National Finals Rodeo last week. Meged won the average for 10 nights at the NFR and also was crowned world champion.

Haven Meged salutes the crowd during his victory lap this past Saturday at the National Finals Rodeo.

At least, not until the cows come home.

On Thursday, five days after becoming the first Montanan to win a world championship and NFR crown in tie-down roping, the 21-year-old was back at the ranch near Miles City, mending fences and unwinding from a recent cattle sale.

The cows were to arrive home Friday. And after that?

“Yeah, I think we’re going to have a big party,” Meged said during a lunch break Thursday. “A big party.”

Still a college student, Meged returned home from rodeo’s most prestigious event with the two biggest prizes — one gold buckle for winning the overall world championship and another for finishing first in the average standings after a consistent 10-day performance in Las Vegas. He pocketed $246,013 for winning the NFR and, unbeknownst to him until he’d taken his victory lap and given interviews in a post-event blur, earned the second buckle for the world title by a razor-thin $1,181 over Shane Hanchey of Sulphur, Louisiana.

It wasn't until the buckle ceremony in the spotlight at the Thomas & Mack Center that what he’d accomplished in his first year finally registered.

“When they handed me the gold buckle, it really shook me up,” said Meged, his emotions reaching the surface when former world champion and buddy Erich Rogers embraced him. “It’s just something I’ve dreamt of my whole life — to be able to win golds, set goals, the how-to and what-to-do to achieve those ... when they handed me the buckle it was just like a dream come true.

“It’s hard to keep your emotions in. It was just a really heart-touching moment.”

For Meged, it was a culmination of a mission born as a “3- or 4-year-old” sitting on a bouncy horse in the family living room, pretending to rope calves while watching 24-time world champion Trevor Brazile — his idol — work his NFR magic on TV. Though the activity certainly was a staple for him as the family’s designated roper during calf tagging, and by third grade he had a practice dummy, he said he didn’t begin competing until eighth grade.

“I remember I’d always try to match those guys on TV,” Meged said. “I wanted to be on TV with those people trying to chase you around and get your autograph and stuff."

By his sophomore year in high school, Meged had quit all other sports to concentrate on his passion, except fishing and golf. Though he likes all aspects of rodeo, he said his mom, Misty, wouldn’t allow competing in rough-stock events such as bull riding or saddle bronc riding until he was 18, so roping earned 100 percent of his focus.

Every day after school he would practice, outdoors during the summer and in a barn in winter in an event ruled by fair-weathered southerners. Meged began collegiately at Western Oklahoma State College in 2016 and transferred to Tarleton State in Stephenville, Texas, for his junior year, winning the College National Finals Rodeo in June.

Even so, as recently as July he briefly had doubts about the trajectory of his career.

During the annual Cowboy Christmas over the Fourth of July holiday, Meged said he went to 20 rodeos and won $800. He returned home to Miles City for nearly a week and immersed himself in ranch duties.

Meged’s dad, Bart, finally gave him a pep talk. The theme: Just relax and take it one day at a time.

“I’d say 80 percent of it is mental, especially when you go from 85 to 100 rodeos,” Meged said. “It ain’t easy when 120 of the best guys are going to every rodeo. You aren’t going to win every one but you’re sure trying. The biggest deal is to keep going, and it isn’t easy. They say rodeo is one of the toughest mental games because you’re not guaranteed paychecks like in other sports.”

Meged eventually found his groove leading to the NFR. He was third the first two nights in Las Vegas, finished in the money on five of the 10 evenings, and maintained his grip on the average while barely holding off Hanchey for the world title on the final night.

“I didn’t draw very good at the beginning of the week, so my plan was to take it calf by calf and do what I can and stay good in the average and try to place in some rounds,” he said. “The bigger deal is keeping it simple out there. There’s always people trying to tell you what to do, so it comes down to you and your horse and your calf and you gotta go out there and take care of business.

“I was aware of where I was the whole time, but you can’t let that get to your head or you’re going to mess up.”

Meged never did mess up, and so here he is, a world champion at 21 — the first rookie since Joe Beaver in 1985 to win tie-down roping at the NFR, and the fourth cowboy ever to win the NFR and CNFR in the same year.

To many, he’s a marvel. It’s one thing to be a world champion as a rookie, another to do it as a tie-down roper from Montana, with its inhospitable climate.

Some even say he has a gift, though such suggestions minimize the commitment.

“People say I have a gift and stuff, but I damn sure practice my ass off,” Meged said. “It’s just something I always worked at. I ride six or seven horses every day. You can never not get better. It never stops.”

Meged still has dreams. He wants to repeat as NFR and world champion, of course, and also plans to add steer roping to his repertoire so he can pursue all-around buckles like his idol Brazile.

In the meantime, there are fences to mend and cows to come home.

And a party to throw before he returns to school at month's end, set for Dec. 27 at Miles Community College. Though Meged has been out at the ranch, the people of Miles City know where to find him and haven’t been shy about expressing their pride.

“They’re happier than heck,” he acknowledged.

Not surprisingly, so is Meged. Matching Beaver’s 1985 feat was a goal, and now he’s done it — and became the guy on TV that 4-year-old wannabe calf-ropers were watching from their bouncy horses.

“To do that is really surreal,” he said, adding: “It’s pretty cool to be where I’m at in my life at such a young age.”