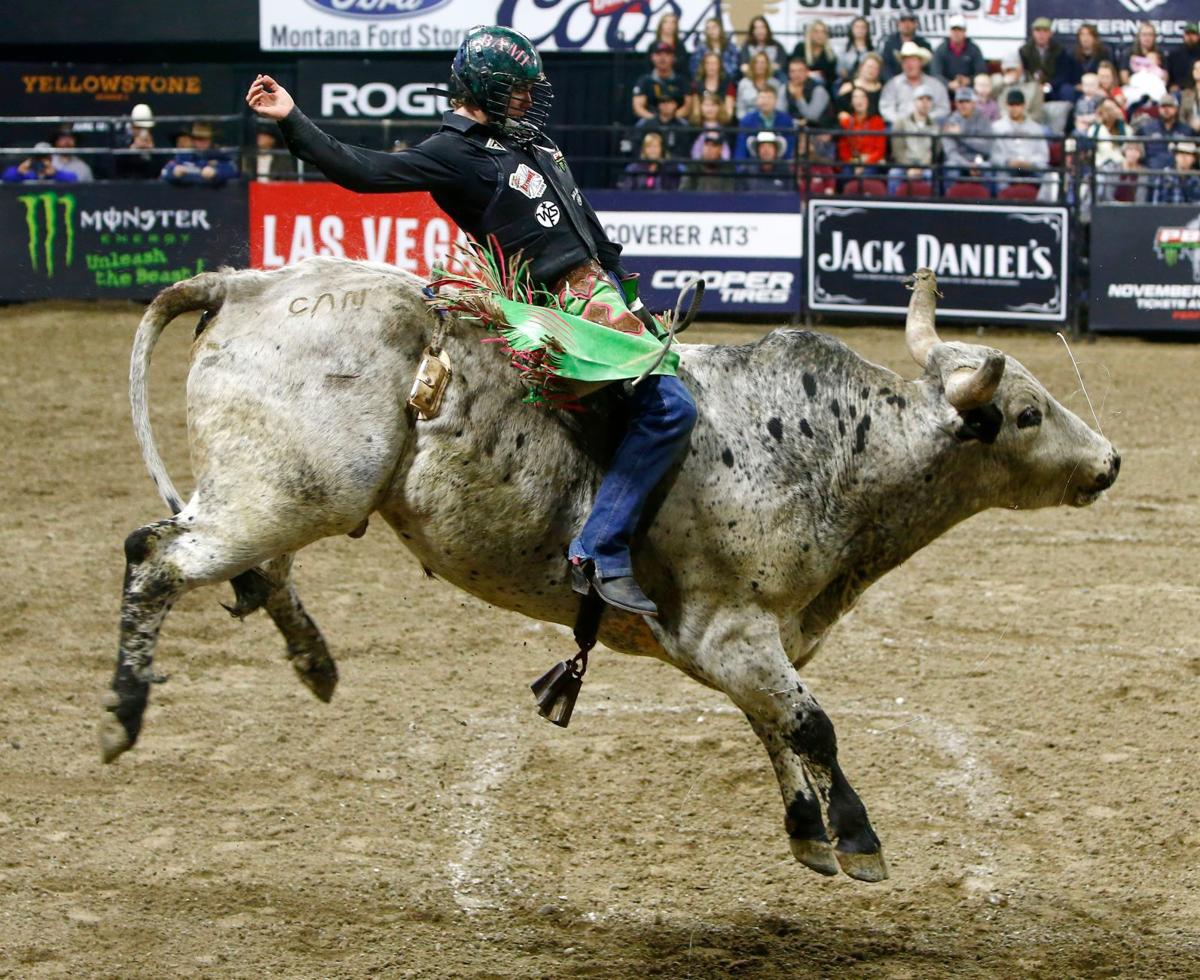 Dalton Krantz rides Morning Wish for no points during the first day of the PBR Billings Invitational at Rimrock Auto Arena at MetraPark on Friday. 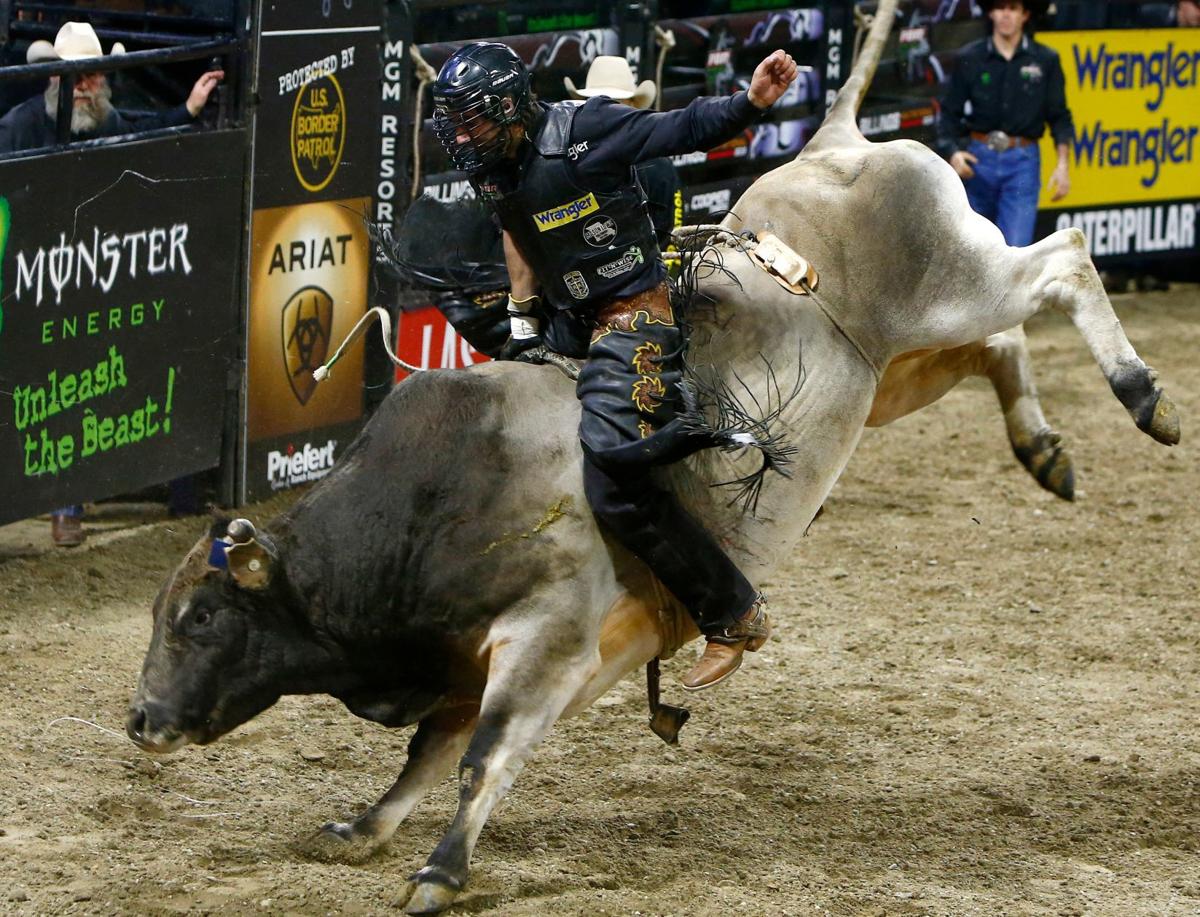 Silvano Alves rides SweetPro's Bruiser for no points during the first day of the PBR Billings Invitational at Rimrock Auto Arena at MetraPark on Friday.

Dalton Krantz rides Morning Wish for no points during the first day of the PBR Billings Invitational at Rimrock Auto Arena at MetraPark on Friday.

Silvano Alves rides SweetPro's Bruiser for no points during the first day of the PBR Billings Invitational at Rimrock Auto Arena at MetraPark on Friday.

BILLINGS — Dalton Krantz is trying to treat this weekend’s Professional Bull Riders Billings Invitational like any other ride, but there are only so many ways to normalize the most high profile event of his young career.

This weekend’s showcase at Rimrock Auto Arena at MetraPark is Krantz’s debut at a televised PBR event. The 19-year-old from Somers, Iowa, is the only such rider in the Billings field, and he has embraced what he called “by far” the biggest event of his career.

“I’ve sat on the edge of my grandma’s couch when I was a kid, kicking on it, acting like I was riding a bull,” Krantz said before his first ride Friday, “so it’s been a dream come true to come here.”

The Billings Invitational has featured a larger crowd, more pyrotechnics, better competition (36 of the top-ranked riders in the world) and a larger purse ($116,000) than any event he’s competed in. He can’t help but notice the differences, of course, but he hasn’t felt overwhelmed.

“All week, I’ve been kinda numb to it, actually,” he said. “It’s televised. It’s big. But it’s still bull riding. It’s still gonna be the same no matter what. I ain’t gonna change nothing.”

As the announcer conducted a short prayer ceremony before Friday’s rides, Krantz ran out to the hallway, removed his hat, knelt and said a prayer to himself. It was one of the many pre-ride routines Krantz carried into this weekend, one of his many methods to prevent this event from feeling overly abnormal.

“Every time I do that, I just want to thank God for helping me get here,” he said, fighting back tears. “I’ve made my family so proud, and I want to keep making them happy.”

Krantz’s spirits were much higher before Friday’s ride than afterward. His bull, Morning Wish, bucked him off at the 5.76-second mark.

The disappointment was paired with some frustration — he felt he was rushed, and Morning Wish nearly “went sideways on” him, he said, nearly forcing him to pull his hand out of the bull rope. But he was able to ride and stayed on longer than the three riders before him.

Though annoyed in the minutes after his ride, Krantz maintained a smile. The 46th-ranked rider in the world has two days to make his televised debut especially memorable.

“I’m a little disappointed, but five minutes, I’ll be over it, ready for tomorrow,” he said. “That’s how you’ve gotta be.”

The championship round will be televised at 2 p.m. on Sunday on CBS Sports Network.

Stetson Lawrence was the 10th rider on Friday, and none of the previous nine lasted eight seconds. Lawrence ended the drought and posted a score of 83.5, good for ninth on the evening.

After Lawrence hopped off his bull, Shere Khan, he did a little dance on the dirt with a rambunctious Shere Khan still nearby. It was a tribal dance, which some people call a “fire walk,” Lawrence said. The 30-year-old from Williston, North Dakota, does the same dance after every ride.

“It’s part of my heritage,” said Lawrence, who is Chippewa and Sioux. “The fans love it. It brings everybody up.”

Lawrence is making his fifth Billings Invitational appearance this weekend, and his best finish has been eighth. Friday’s ride gave him confidence that he can post a new best.

The ride right before Lawrence’s was one of the highlights of the weekend. Three-time world champion Silvano Alves was matched up with SweetPro’s Bruiser, the world’s top-ranked bull and the 2018 Bull of the Year. Bruiser won the battle, bucking Alves at the 6.14-second mark.

“That was a great matchup,” Lawrence said. “That bull’s outstanding, Silvano’s outstanding. Just two champions going at it, and they showed it out there.”

Photos: Bull riders compete in the first day of PBR in Billings

Professional bull riders compete in the first day of action during the PBR Billings Invitational at Rimrock Auto Arena at MetraPark on Friday.

BILLINGS — Matt Triplett has been easy to recognize this week.