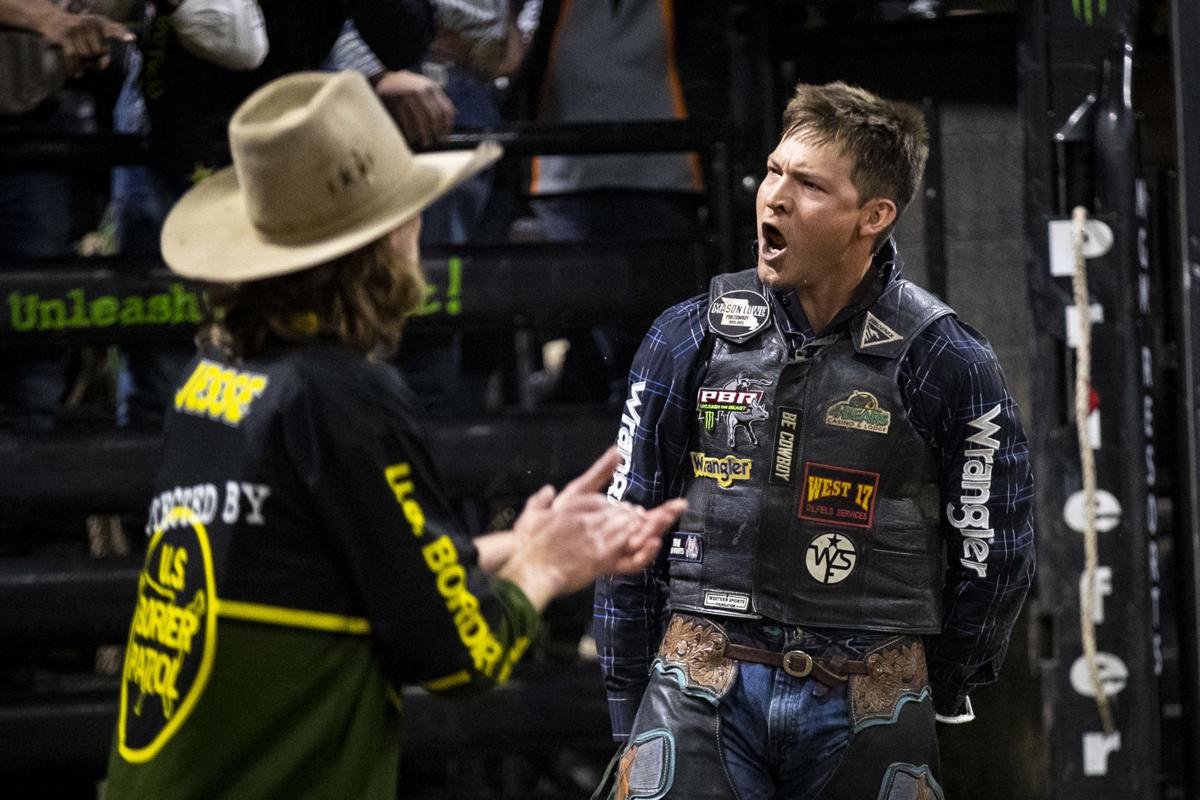 Dakota Louis reacts after putting up an 86.5 on Chilli Whap during the PBR Unleash the Beast Ariat Invitational at First Interstate Arena at MetraPark on Sept. 11. Louis, of Browning, has qualified for his first PBR World Finals. 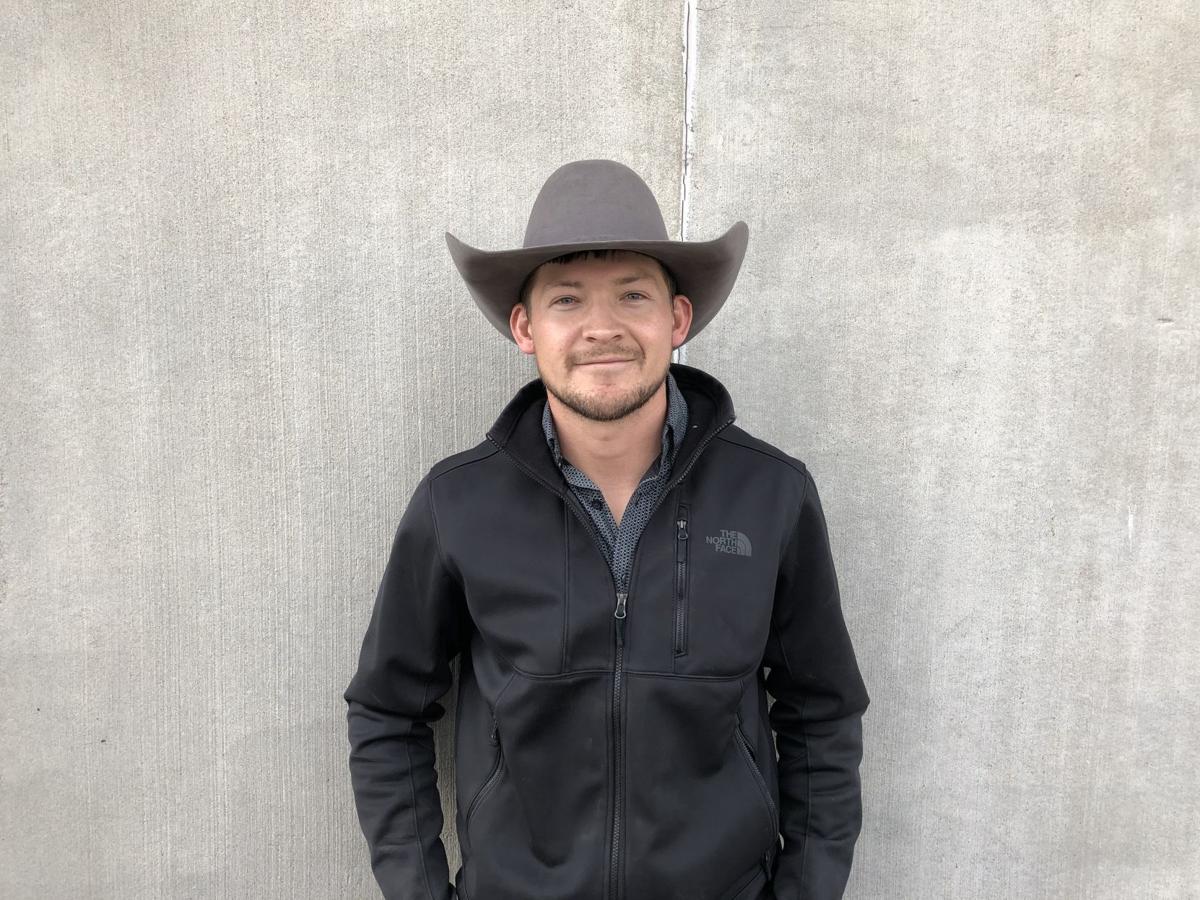 BILLINGS — Dakota Louis has achieved his goal of qualifying for the Professional Bull Riders World Finals.

And while he feels blessed to qualify for the year-end event for the first time in his three-years of competing full-time in the PBR, the 28-year-old Montana cowboy isn’t satisfied just qualifying for the World Finals.

Now that Louis has advanced to the grand finale of bull riding, he’s hoping to cash in and post successful rides Thursday through Sunday in Arlington, Texas, at AT&T Stadium.

“My goal is just to go and ride every bull I get on and be the top gun at the end of the week.”

Cheering Louis, who lives on the family ranch near Glacier National Park, at the home of the Dallas Cowboys will be several members of his family who will be in pod seating.

“My family will be down there oh for sure,” Louis, a 2011 Browning High School graduate, said. “To kind of reach a lifelong goal and to have your family who has been supporting you your whole life to be able to witness that is definitely something special.”

All the riders who qualified for the World Finals will ride once per night from Thursday through Saturday, according to a PBR press release.

For round four on Sunday, all the bull riders with a qualified ride through three rounds will have another opportunity to conquer a bovine athlete. If fewer than 30 riders have recorded a score, all spots in the round will be filled based on the world standings. After the fourth round, the top 15 cowboys will advance to the championship round.

Cowboys will be fighting for the PBR world championship and in addition the bull rider with the most world points accumulated through the five rounds will net the World Finals event title and $300,000.

Volborg’s Jess Lockwood, the reigning world champion, is ranked fifth in the world and will be back to defend his title. Lockwood, who also won the world title in 2017, is coming back from a right shoulder injury suffered while competing in Lincoln, Nebraska, on Oct. 3.

Lockwood also missed a significant portion of the season with a hamstring injury that required surgery before making a triumphant return to the sport and homecoming at the Ariat Invitational at First Interstate Arena at MetraPark in September when he rode his first two bulls and reached the championship round.

The 23-year-old Lockwood was both the World Finals event winner and world champion last year.

The world champion will earn a gold buckle and a $1 million bonus.

Louis is one of 39 riders in the field. He qualified as one of the top 35 healthy and active riders at the conclusion of the Pendleton Whisky Velocity Tour Finals that concluded on Saturday in Sioux Falls, South Dakota.

Entering the weekend Louis needed to finish in the top 35, or earn one of four wild-card invites to the World Finals that were up for grabs at the Denny Sanford Premier Center. Louis finished 19th in the 45 rider field in Sioux Falls with a first-round score of 83.

“I rode my first bull over there and that was my game plan was to go and ride each bull and whatever was going to happen was going to happen,” Louis said. “I bucked off my second bull right there before the whistle and then it was nail-biting for me. I knew my fate was not in my hands anymore. I went there with a goal and didn’t reach that goal. But, the good Lord had a plan for me and all I can do is try and better myself. I’m just thankful for the opportunity.”

The 97 bulls selected for the World Finals are among the best bovine athletes in the world and Louis is looking forward to the test.

“It’s the best of the best bulls,” Louis said. “There are so many great breeding programs now a days and the bulls today are bred and raised to be bucking bulls. To have the absolute best pen of bulls to get on against the best guys is just icing on top of the cake. As a bull rider that is what we have been striving for since we were little kids, to be at the best bull ridings against the best and to be the best.

“The bulls for all this week at the World Finals will definitely test a guy for sure. It’s anybody’s ballgame.”

Brazilian Jose Vitor Leme, who won the Billings Unleash The Beast series stop this year, enters the finals with 1,341.5 points and is 424.59 points ahead of fellow countryman Joao Ricardo Vieira. A third rider from Brazil, Kaique Pacheco, is ranked third and is 688 points behind Leme.

Louis explained that riding against 38 of the other top bull riders in the world will inspire him to do the best he can.

“It’s going to be a great lineup of bull riding,” he said. “All the top bull riders will be there. It levels everybody up. It makes you want to step up and want to be your best.”

While making the drive to Arlington from Sioux Falls with friend Cody Casper, of Newport, Washington, who is an alternate for the World Finals, Louis had time to think about his first opportunity at the year-end event.

“I know it is a big stage, but in bull riding you just keep it basic and that starts with riding your bull,” Louis said. “That’s where it starts and finishes. I’m not going to do anything different, but will continue to focus on doing my job the best I can do.

PBR Insider Justin Felisko visits with The Billings Gazette and 406mtsports.com about the PWVT Finals.