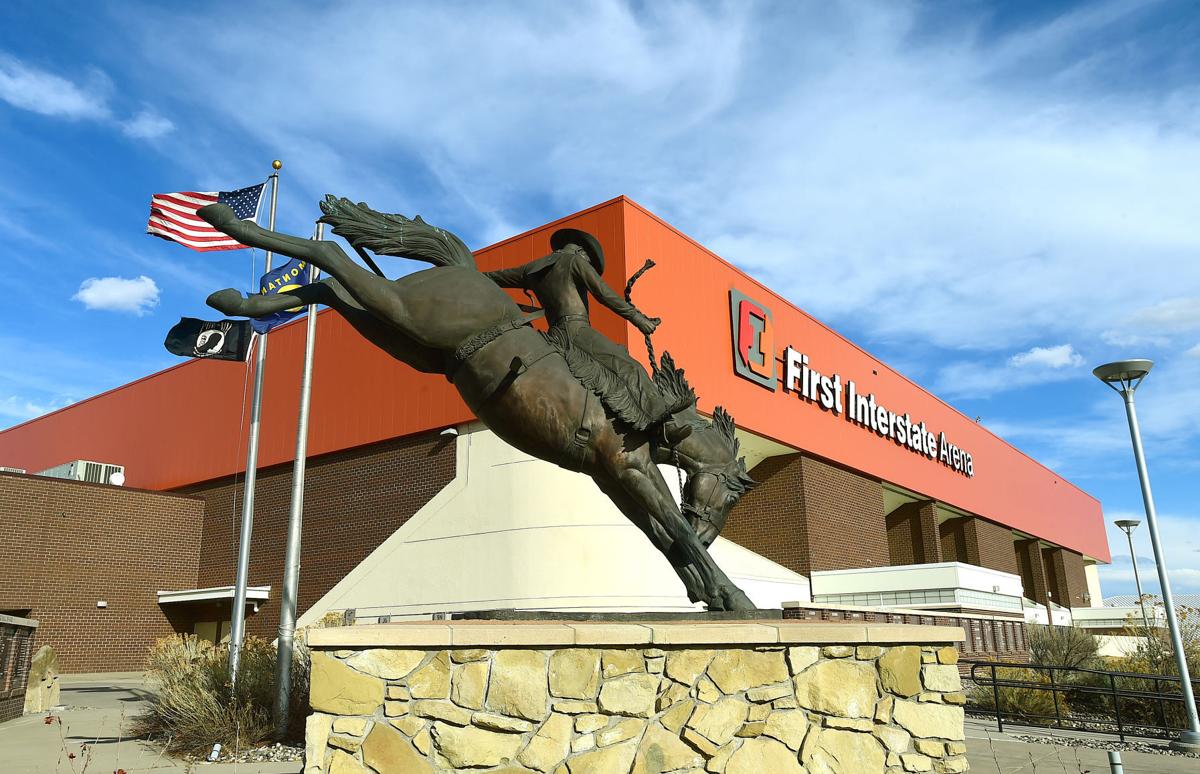 The 18-foot bronze sculpture of Dan Mortensen is pictured in the foreground of First Interstate Arena at MetraPark in this 2020 photo. 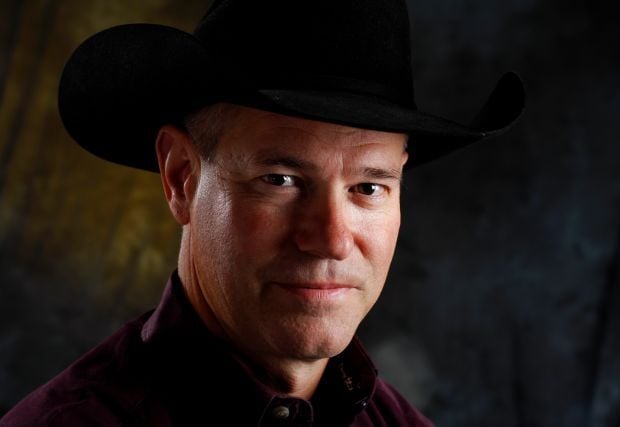 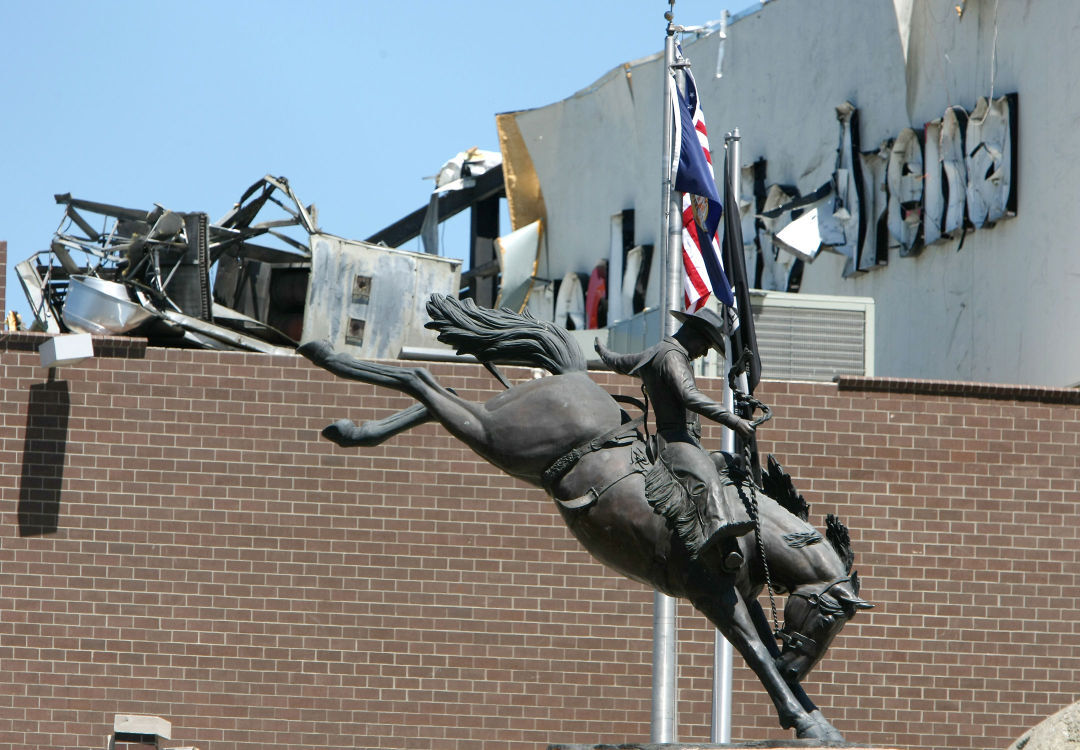 The bronze statue of saddle bronc rider Dan Mortensen that stands outside the Metra remained mostly undamaged following the June 2010 tornado. It remains the centerpiece of the Montana Pro Rodeo Hall and Wall of Fame today.

The 18-foot bronze sculpture of Dan Mortensen is pictured in the foreground of First Interstate Arena at MetraPark in this 2020 photo.

The bronze statue of saddle bronc rider Dan Mortensen that stands outside the Metra remained mostly undamaged following the June 2010 tornado. It remains the centerpiece of the Montana Pro Rodeo Hall and Wall of Fame today.

BILLINGS — A new collector’s bronze of Montana rodeo great Dan Mortensen is being created to help the Montana Pro Rodeo Hall and Wall of Fame carry out its mission to award college scholarships.

On May 14 at 2 p.m., in front of First Interstate Arena at MetraPark where the Dan Mortensen bronze as well as the Brand Block Wall and the Wall of Fame are located, the new collector’s item of Mortensen will be unveiled.

According to Jay Linderman, the vice president of the MPRHWF, Mortensen is expected to be in attendance. The new bronze will be approximately two feet tall. It is the work of artist Bob Burkhart of Bozeman, Linderman said.

In total, there will be 15 castings of the new Mortensen bronze.

Over the years, the MPRHWF has used Mortensen bronzes in fundraising raffles and auctions to help fund the organization’s scholarship program, for high school seniors in Montana who want to pursue the sport of rodeo in college.

To date, $570,000 in scholarships have been awarded by the group, according to its website, and Linderman said this year that total should eclipse $600,000 with 200 student-athletes having benefited from the program.

The original bronze sculpture of Mortensen, a six-time world champion saddle bronc rider from Billings who won the all-around world title in 1997, was done by R.F. Rains. The mold is worn out and the artist is deceased.

“The little version of the one at the Metra is what we have been using for 16 years to sell at these different auctions and raffles and we wanted to keep doing that,” Linderman said.

And just so there wasn’t any confusion about the current 18-foot bronze sculpture of Mortensen at MetraPark — the monument site was dedicated on Oct. 16, 2002, according to the MPRHWF website — that historic work of art will remain.

The statue of Mortensen is prominently displayed at MetraPark and is observed by many who attend events at the facility. The statue has been a steady presence at MetraPark, surviving even the Father's Day Tornado with minimal damage in June, 2010.

“The bronze there is staying,” said Linderman.

Linderman said the MPRHWF commissioned Burkhart to create a new piece of art of the ProRodeo Hall of Fame cowboy.

At the gathering on May 14, the public is welcome, and a sealed-bid auction for the first of the 15 new bronzes will begin. The bronzes will all be identical but the number, Linderman said. The winner of the auction will be announced at the group’s banquet Oct. 2 at the Billings Hotel and Convention Center.

Linderman said 10 of the 15 collector’s pieces “are spoken for,” including three the MPRHWF will raffle off at its annual banquet over the next few years. The others will be for sale to help raise funds for the scholarships. This year’s scholarship winners will be announced at the Montana High School Rodeo Association Finals this summer and the winners will be recognized at the MPRHWF Banquet in October.

After the Mortensen bronzes have been sold, the MPRHWF plans for other legendary Montana cowboys to be honored with a limited-edition collector’s bronze.

According to a PRCA news release, Mortensen’s bronze is the first in a “Legacy Series.” In the next several years, other Montana world champions to be honored with a bronze commissioned by the MPRHWF include Deb Greenough, Bill Linderman, Benny Reynolds, Larry Peabody, Ty Erickson, Haven Meged, Loyd Ketchum, Shawn Davis, Clay Tryan and Brad Gleason.

“It might take us 20 years to get through all those,” said Linderman. “We’ll sell all or most of the first one and have the second cast when the first one is gone and start the whole process again. We’ll only do 15 of each person.”

For information on purchasing a Mortensen bronze or entering the sealed-bid auction, call Linderman at 307-710-6193.

BILLINGS — A total of 26 individuals, families, businesses and ranches will be saluted and inducted into the Montana Pro Rodeo Hall and Wall o…