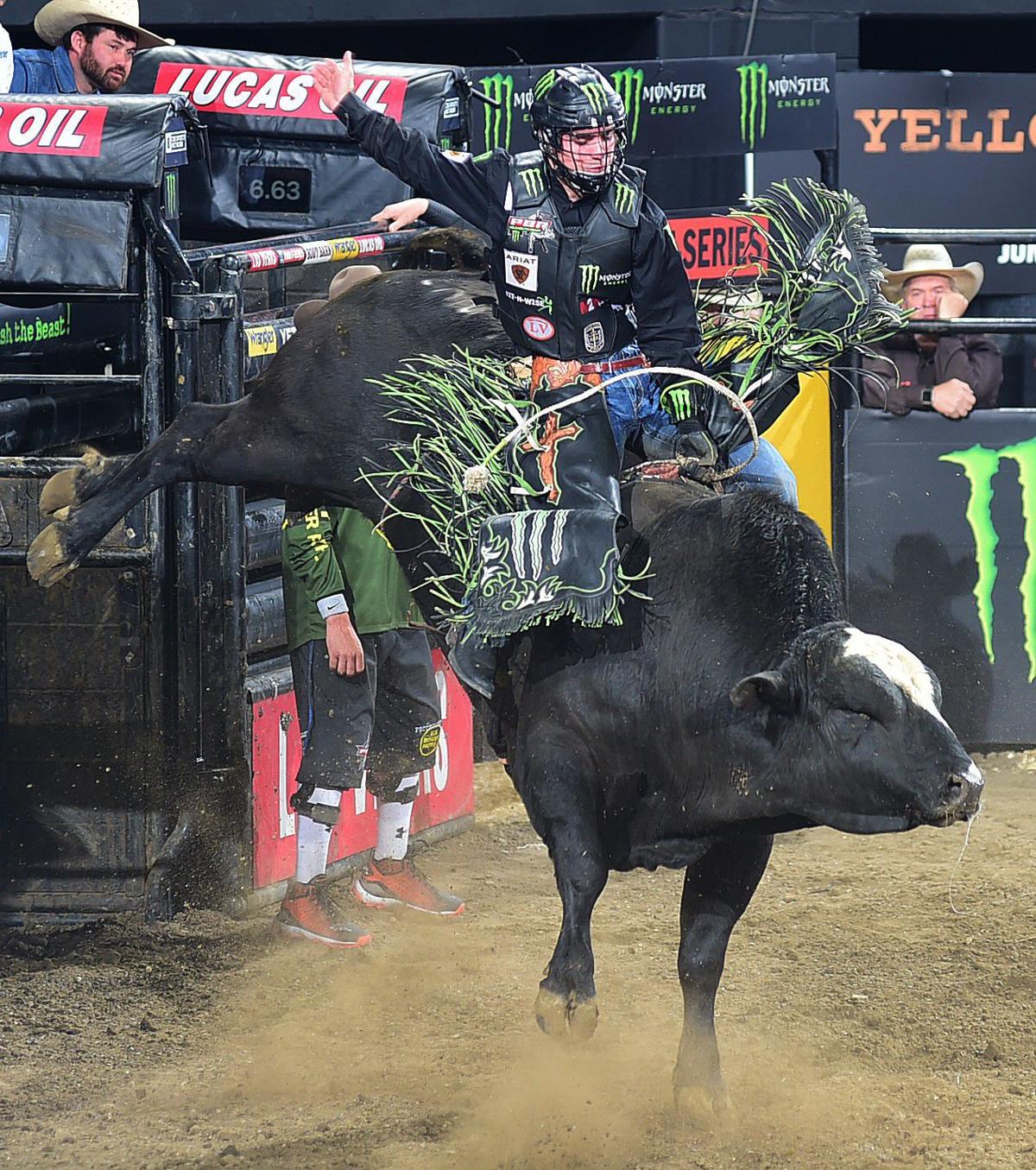 Jose Vitor Leme rides Catch My Drift on the final day of the PBR Billings Invitational at Metra in 2019. Leme is the top-ranked bull rider on the PBR Unleash The Beast Circuit. 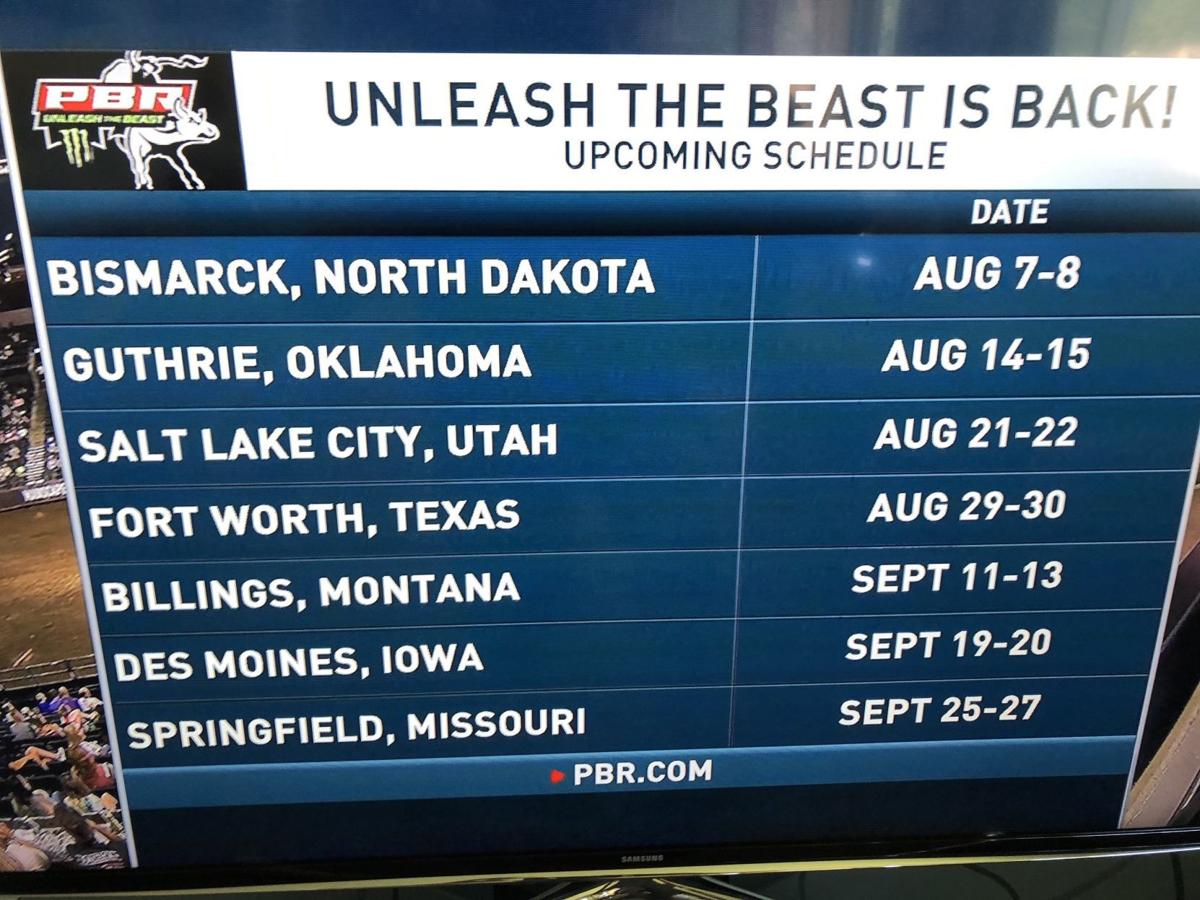 This graphic, with a Billings stop listed for Sept. 11-13, was displayed during a PBR television broadcast on CBS on Sunday.

Jose Vitor Leme rides Catch My Drift on the final day of the PBR Billings Invitational at Metra in 2019. Leme is the top-ranked bull rider on the PBR Unleash The Beast Circuit.

This graphic, with a Billings stop listed for Sept. 11-13, was displayed during a PBR television broadcast on CBS on Sunday.

BILLINGS — The PBR is coming back to Billings.

On the Monster Energy Team Challenge championship game broadcast from Sioux Falls, South Dakota, on Sunday on CBS, Professional Bull Riders CEO Sean Gleason made an announcement, that "subject to change" the PBR had added dates to its Unleash The Beast tour.

On a graphic shown as Gleason was being interviewed, the Billings stop Sept. 11-13 was displayed along with events in Bismarck (North Dakota), Guthrie (Oklahoma), Salt Lake City, Fort Worth (Texas), Des Moines (Iowa) and Springfield, Missouri.

The three-day stop in Billings will be at First Interstate Arena at MetraPark.

MetraPark marketing and sales director Ray Massie said attendance would be capped at 40% capacity at the arena. He said normal capacity seating for a PBR event at First Interstate Arena is 8,600 to 8,700 spectators, meaning approximately 3,400 to 3,500 fans would be allowed at Metra.

Columbia Falls native Matt Triplett, who is ranked 13th in the PBR world standings, said he is looking forward to competing in Billings.

“Just the fans and the atmosphere and stopping in Billings again,” he told 406mtsports.com. “It’s always a good stop.”

The PBR schedule, like many in the sports world, has been altered by the coronavirus pandemic. Originally, the top-tier PBR Unleash The Beast Billings Invitational set for April 17-19 was canceled in March.

In a PBR news release announcing the schedule changes, it said, “all scheduled dates for PBR events are subject to change based on government guidance and changing health conditions."

The PBR release said that the organization “is following local, state and federal guidance and introducing fan protocols for safe and responsible ticketed events.”

When the April show was canceled, it appeared to end a streak of 24 consecutive years for the PBR to perform in the Magic City. The Billings stop, which regularly draws large crowds, is the longest-running PBR event, and if the schedule holds will continue to be.

Massie said ticket pricing and purchasing information will be released sometime in the next 10 days. Tickets will be available in “pods” where groups, such as a family, can sit together.

According to PBR officials, fans will be able to purchase 2-8 seats in pods and will be separated from other groups of spectators. There will also be a focus on cashless transactions and mobile ticketing for the event. To aid in social-distancing efforts, activities on the concourse will be minimal, and merchandise sales will be limited to “best-selling items.”

“We are excited about having them and have a distance protocol in place to follow,” Massie said.

Massie said hand sanitizing stations will be at the arena for the event.

The PBR has been at the forefront in the return of live sports events.

The last time, fans were at an elite series tour live event was in Little Rock, Arkansas, March 6-7, the release noted. Due to the novel coronavirus, an event closed to fans was held the next weekend in Georgia and three more closed events were held in Oklahoma in April and May to conclude the first half of the PBR season.

The PBR also introduced a team competition during the unusual break in the action caused by COVID-19. The Monster Energy Team Challenge started in early June and the first four weekends were contested without fans in attendance in Las Vegas. The championship playoffs were held in Sioux Falls and spectators were allowed at the Denny Sanford PREMIER Center this past weekend. The Associated Press reported “a little more than a thousand fans were on hand in the 9,000-seat arena” on Friday night.

In television footage on Sunday, fans were spaced apart and arena personnel were wearing masks. Some of the fans also wore masks.

According to PBR officials, the circuit encourages fans to wear masks in the arena and follows state and local guidance for all events. In Sioux Falls, for example, facial covering was optional for fans in the arena.

According to the PBR, the cowboys are required to wear masks in the arena at all times — with the exception of when riding a bull. When it is their turn to ride, facial coverings are optional for the athletes as masks may interfere with their vision and breathing.

In the championship game, Jose Vitor Leme — who leads the world standings — scored an 88.75-point ride, and 2018 Rookie of the Year Keyshawn Whitehorse bucked to a score of 88.5. The two rides gave Team Cooper Tires a 177.25-0 victory over Team Pendleton Whisky.

All of the event weekends of the revised PBR schedule will be telecast on CBS and CBS Sports Network, the release said.

Triplett, who was the captain for Team Lucas Oil during the team competition in Las Vegas, also competed in the Velocity Tour competition on Sunday in Sioux Falls.

It was the first time in 126 days bull riders competed on the Velocity Tour, according to a PBR press release. Fans were also permitted at the Velocity Tour event. Mauricio Moreira was the champion, winning $7,440 and earning 44 world points at the $20,000 purse event.

Triplett did not place, but said “it was good to be back and have them (the fans) back for sure.”

According to Triplett, having fans in the arena — even with attendance limited — energizes the bull riders.

“It makes it a lot better when they (the fans) are there,” Triplett said. “It pumps us up, but it’s still all the same. You have to go there and do your job.”

While attendance will be limited at the Metra, Triplett is sure the Montana PBR fans at First Interstate Arena will be enthusiastic.

“They are every year,” he said. “It’s never a letdown when we go there, that’s for sure.”

'He checks boxes': NFL future for Montana State’s Troy Andersen is not if but where