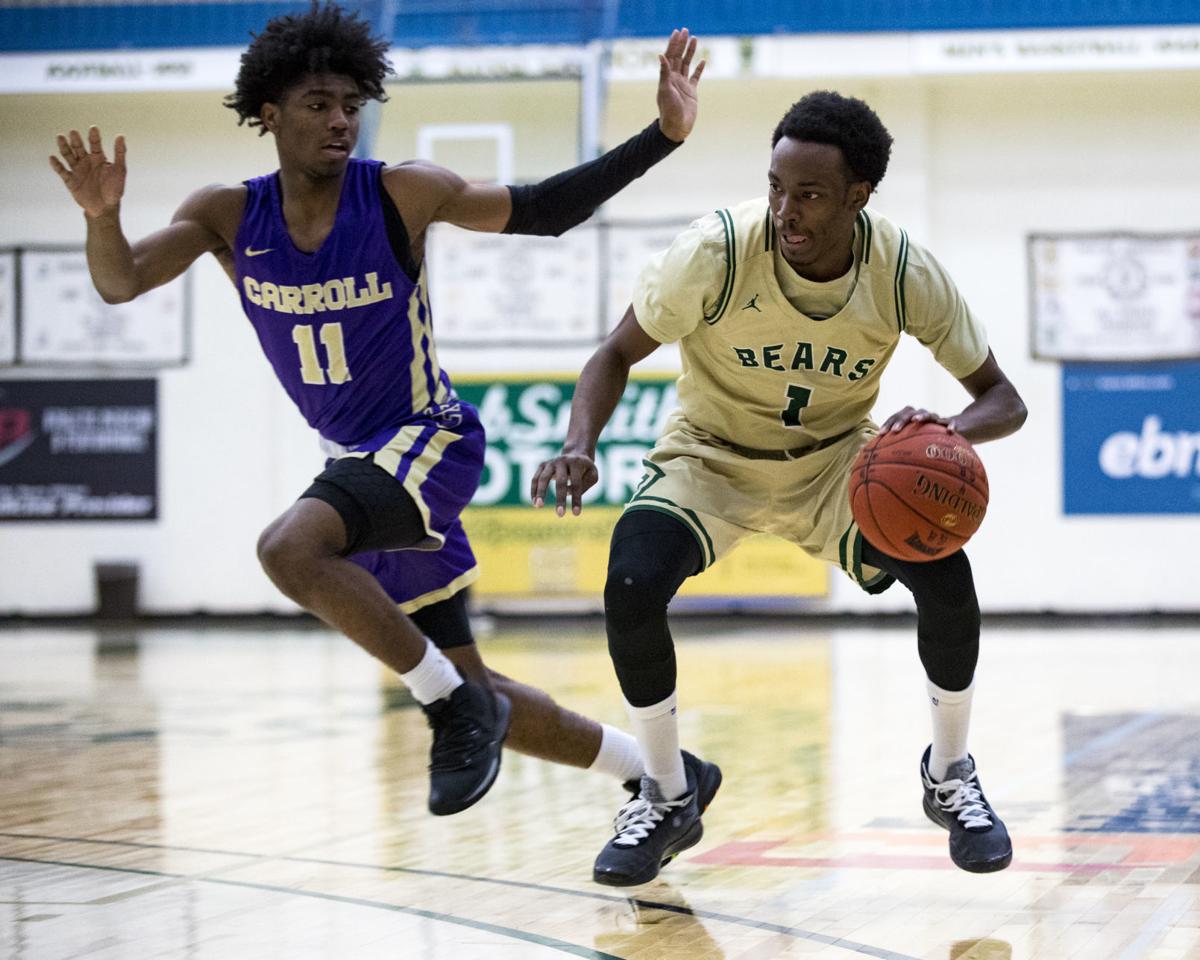 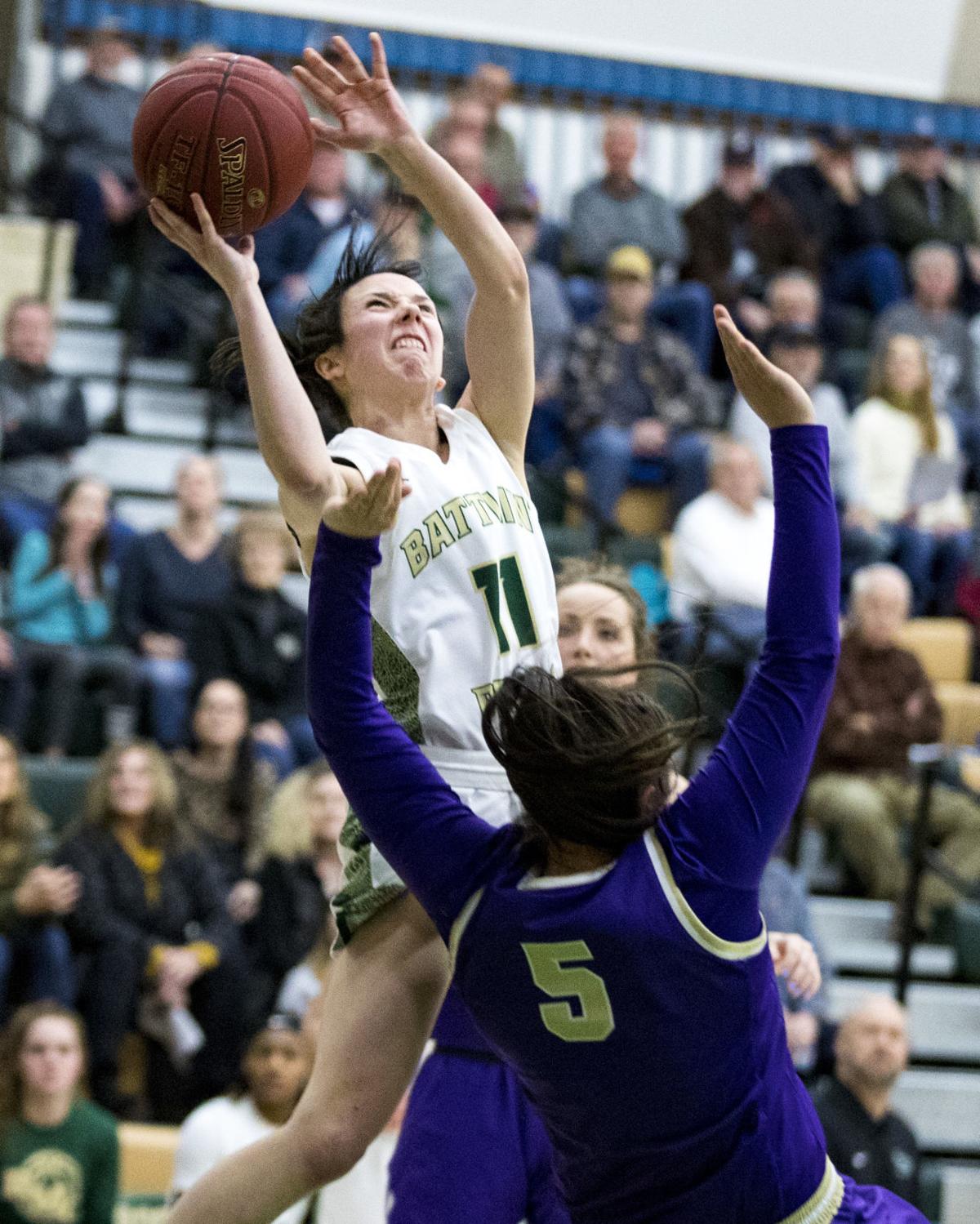 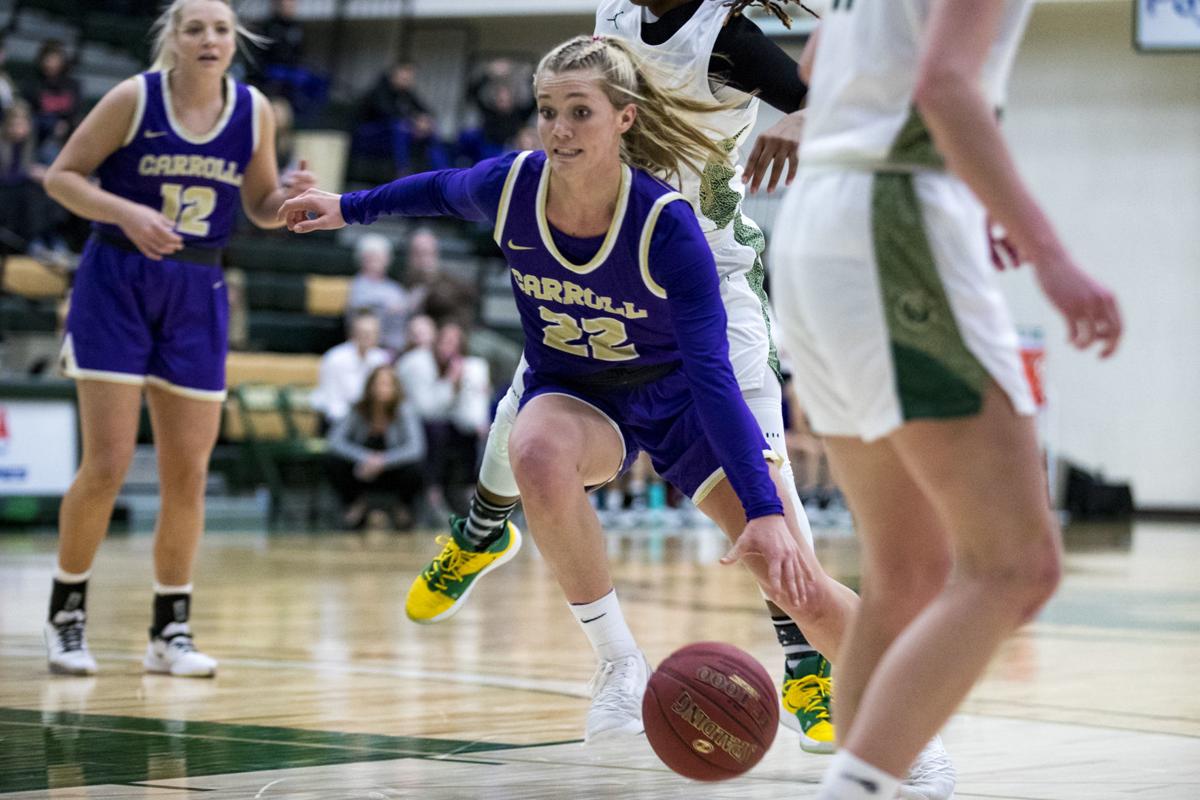 Carroll College's Kamden Hilborn drives towards the basket during a game against Rocky Mountain College at the Fortin Center on Wednesday.

Carroll College's Kamden Hilborn drives towards the basket during a game against Rocky Mountain College at the Fortin Center on Wednesday.

BILLINGS — The Fortin Center sat mostly empty for the first half of this college basketball season — other than the scurrying of workers installing a gleaming new court surface that was necessitated after a broken water pipe damaged the floor.

In the interim, the men’s and women’s basketball teams from Rocky Mountain College held their own just fine playing “home” games at First Interstate Arena at MetraPark and the Shrine Auditorium, going a combined 13-2.

Returning to their familiar campus confines Wednesday night, the teams played two thrillers against Frontier Conference rival Carroll College, the most dramatic being the Saints’ 101-97 win in triple overtime of the men’s game.

After weeks playing away from home, Rocky couldn’t wait to christen its new court. But Carroll spoiled the party.

Dane Warp and Darius Henderson matched each other shot for shot in the men’s game, each finishing with 33 points. Warp’s 3-pointer at the end of regulation forced overtime.

The former Havre standout dribbled the length of the court as the seconds ticked away, pulled up from the right wing and buried the shot to tie the score 72-72.

Henderson’s 3-pointer from beyond 25 feet in double overtime tied the score again at 91-91 and helped force a third extra session, but that’s when No. 9 Carroll took command, as shots by Shamrock Campbell and Jovan Sljivancanin gave the Saints a six-point advantage.

The Bears got back within 99-97, but two free throws by Dennis Flowers III iced the game.

“Rocky’s a tough team. Coach (Bill) Dreikosen’s always going to have them ready to go,” said Warp, who made 11 of 23 shots from the floor and went 9 for 9 from the foul line. “They battled. I’m proud of our guys. We battled.”

Of his tying 3 at the end of regulation, Warp said he “was just trying to keep my eyes on the hoop and try to discourage them from fouling me. I came down and tried to get as good a look as I could. I threw it up there and it went in. Got lucky.”

Henderson was Rocky’s go-to man in overtime, and he finished the game with five 3-pointers and hit all 10 of his free-throw attempts. Henderson pulled down nine rebounds. Grant Wallace contributed 23 points.

With the win, Carroll remained unbeaten in the Frontier with a 5-0 mark. The Saints improved to 14-3 overall. Rocky is now 6-8 overall and 1-4 in the Frontier.

Similarly, Rocky’s women felt they had let their game slip away.

The Bears came into the day with an eight-game winning streak and appeared poised to keep it intact. Rocky led late but a 3-point shot by Carroll’s Kamden Hilborn put the Saints in front 49-47 with 3:33 remaining.

A pair of late baskets by Taylor Salonen also kept Rocky at bay in the final minutes.

What hurt the Bears was Carroll’s ability to rebound the ball on the offensive end of the floor. The Saints finished with a staggering 20 offensive rebounds, which kept possessions alive and allowed for second and third opportunities.

“They beat us up pretty good on the offensive boards tonight,” Rocky coach Wes Keller said. “You give up that many offensive boards, I don’t care who you’re playing, it’s going to be tough to win.

“I thought their depth played a role in them maybe wearing us down a little bit. They were more balanced. Give them credit. They came in and pushed us around.”

Carroll put eight players in the scoring column, led by Christine Denny’s 14 points. Denny also had 14 rebounds. It helped make for the team’s 3-for-22 showing from beyond the arc.

Though the Saints made the ones that counted.

“We pride ourselves on that — doing the little things and outworking teams,” Carroll coach Rachelle Ayers said. “Our shots are not always going to be there, so we’ve got to find other ways to win games. Tonight I felt like our offensive rebounding and just our defensive intensity in the end maybe wore them down a little bit.”

Rocky’s Markaela Francis, who averages a double-double per game, had 12 points and nine rebounds, though the Saints keyed on her defensively. Guard Kloie Thatcher, the reigning Frontier player of the week, had 13 points.

Hilborn, in her first season at Carroll after transferring from Montana State at the end of last season, finished with 10 points and six assists.

The former Helena High standout continues to adjust to her new surroundings, and played a key role on Wednesday.

“Our hustle plays were huge for us,” Hilborn said. “Girls diving out of bounds, always giving that extra hustle to win the ball back.

“We kind of grinded it out. It wasn’t a pretty win, but we got it done.”

Rocky's men and women have had to play their "home" games at First Interstate Arena at MetraPark.